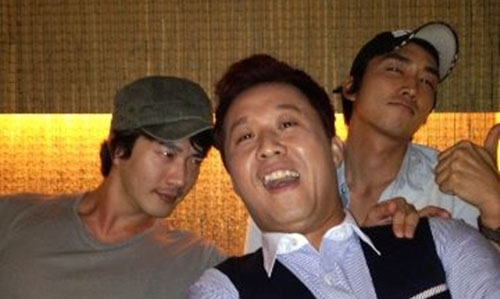 On September 6, Jung Jun Ha wrote on his twitter “I was able to hang out with Seung Hun and Sang Woo after receiving permission from Nemo-Nim. We were chatting and having a good time. Didn’t realize how fast time flew by.. oh ho.. it’s already 3 in the morning.” (side note: “Nemo” is his wife’s nickname and “Nim” is an honorific ending.)

He then revealed the picture he took with the two dashing actors. Jung Jun Ha’s face appears to be much larger than the other two.

Jung Jun Ha seems to be aware of this because he also added, “Really… really… it’s only because I’m in the front… let’s not misunderstand!” bringing laughter to everyone who has followed his post.

It’s been a while since they last gathered, which was during Jung Jun Ha’s wedding ceremony. He married his girlfriend, whom he affectionately nicknamed “Nemo.”

For all the married folks out there, when’s the last time you went out and chilled with your friends?