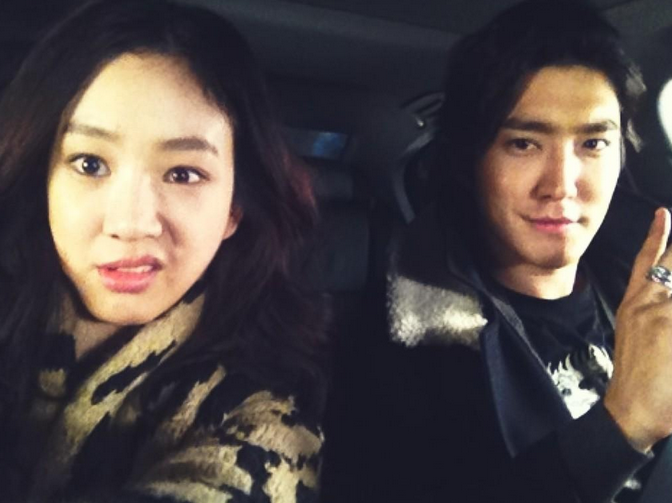 It was another fun week with K-Pop celebrities capturing moments of everyday life and sharing them on social media!

PSY met with some of the most prominent U.S. celebrities, while UEE and Kahi showed their support for Son Dam Bi’s comeback! Hyun Bin shared a special moment with SISTAR, FT Island’s Lee Hongki showed how to get ready for the freezing cold, and Big Bang’s Seungri updated his me2day for the first time in months!

(Click the arrow at the top of this box to see the next photo!)

“I was able to have a meaningful conversation with will.i.am. We talked about music, life, and career. Tomorrow I will make sure to bring Soju.” – PSY meets up with the Black Eyed Peas’ Will.I.Am!

“Nowadays.” – Kara’s Gyuri shows off her elegant beauty in her “goddess” selca!

“Sports Car 95 Line! The back is full so we can’t give anyone a ride. Next time we’ll give you a ride.” – Teen Top’s Ricky and Changjo show off their new convertibles!

“I played the role of Elle Woods on the stage for the first time today. I was so nervous but also very excited. I am going through many different emotions, but this is just the beginning. I want to thank everyone who were in the audience and my fans who encouraged me and enjoyed the show.” – APink’s Eunji uploads her Elle Woods-look selca after her first performance for the musical “Legally Blonde.”

“I have a secret… my..my wisdom teeth is coming out! kekeke” – f(x)’s Sulli shares a “secret” with her fans with this adorable selca!

“How have you been? It’s been a long time, but you look great since I last saw you. You’ve gotten prettier. In my eyes, you always look nice. But something about you looks a little different today. You look especially hungry.” – Big Bang’s Seungri updates his me2day for the first time in months!

“Our Dam Bi unni made her comeback! I’m so thrilled to be able to introduce Dam Bi unni at Music Bank!” – After School’s UEE shows her support for labelmate Son Dam Bi’s comeback!

“Today’s is cold. It’s crazy. But I like the winter.” – FT Island’s Lee Hongki shows how to prepare for the freezing cold!

“With Hyun Bin oppa who is currently serving in the Marine Corp~” – SISTAR’s Dasom tweets a group photo with Hyun Bin, who looks dashing in his uniform.

All four miss A members give a big “A” rating for the movie, “The Twilight Saga: Breaking Dawn Part 2.”

“One shot of Lee Go Eun, a writer who still keeps her patience no matter how unjust things are, and Kang Hyun Min, a super nice guy who never gets angry.” – The co-stars of SBS drama “The King of Dramas” share a funny selca!

“A photo I took while lying down at the top of the tower. It looks like I’m floating in the sky.” – ZE:A’s Siwan takes a dangerous (?) selca from rooftop!

15) Brian with DBSK’s Yunho and Changmin

“My adorable little brothers Yunho and Changmin.” – Brian shows his friendship with the two DBSK members!

17) ZE:A’s Siwan and Kwanghee, along with MBLAQ’s Lee Joon

“Got a foot massage with my friends whom I love. Siwonhae siwonhae [translated to feels nice] Siwanhae. Hahaha.” – Kwanghee tweets a photo of himself with Siwan and Lee Joon getting a foot massage at a spa.

“I am the pastry fanatic! Anyone who wants to have some, give me your hands! This looks delicious, now whenever I am craving bread I can always come here.” – Super Junior’s Ryeowook shows his love for pastries!

“Breakfast filled with love that Eugene made for me at 4 in the morning. She lovingly made it for me before I left early in the morning~ I feel energized~ But I’m curious, what did she put in here to make it so tasty?” – Ki Tae Young proudly reveals a photo of his breakfast packed by none other than his wife Eugene!