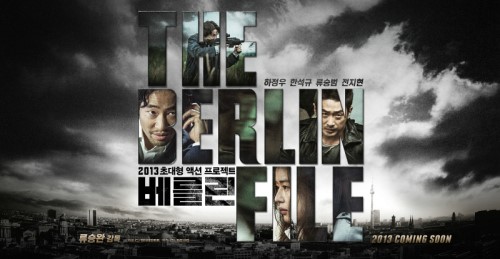 It has been confirmed that the director Ryu Seung Wan’s megaphone-gripping action movie, “The Berlin File” will hit theaters January 31, 2013.

“The Berlin File” is based on a fictional place where one cannot return alive. The story takes place in Berlin, and each secret agent has become their own target for their personal goals, which leads to their ultimate mission. The film stars four impressive actors, Ha Jung Woo, Han Seok Gyu, Ryu Seung Bum, and Jeon Ji Hyun. Their charismatic acting and Director Ryu’s directing sensation has garnered high expectations.

On December 27, the production company,CJ Entertainment, stated, “It is rare to see such an immense reaction from just releasing the teaser poster, trailer, and some still photographs. Just like movies bombarded the box office in 2012, it will continue on next year with ‘The Berlin File.’”