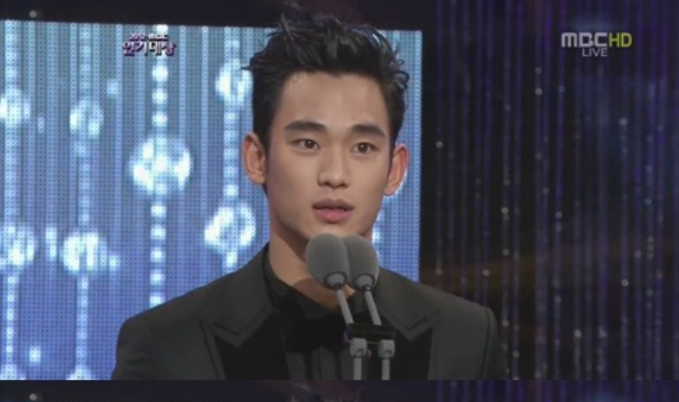 On December 29 at the “2012 MBC Acting Awards,” actor Kim Soo Hyun received the Best Actor Award in the mini-series category for his role in “The Moon that Embraces the Sun.”

Kim Soo Hyun, who also won the Popularity Award, stated, “I would like to say thank you and love you to my mom, dad, and my aunts. I would also like to thank actor Bae Yong Joon and everyone in our agency, as well as the drama crews.”

Kim Soo Hyun continued, “To be honest, I am scared of receiving such a big award. I feel like I have done very little this year, yet people around be keep praising me. There is such a big gap between what I have actually achieved and what others think I have done, and it scares me to death. I will always be humble and work hard.”

Kim Soo Hyun made his debut in 2007 in MBC’s “Kimchi Cheese Smile.” He also appeared in many dramas including “Jungle Fish,” “Will It Snow on Christmas,” “Giant,” and “Dream High.”

In 2012, Kim Soo Hyun’s popularity exploded with his appearance in “The Moon that Embraces the Sun,” which achieved incredible rating of 40%.