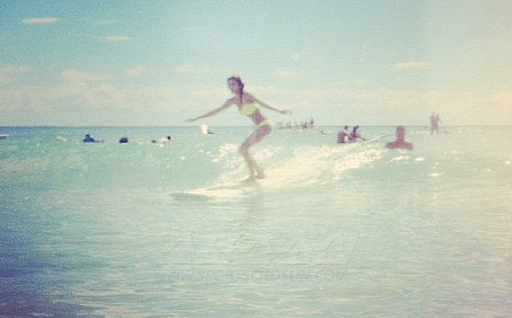 Another week has passed in the world of K-Pop and our stars are so faithful keeping us up to date with their lives! From miss A’s Suzy’s kiss to 4minute’s HyunA visiting her brother’s graduation, f(x)’s Victoria posing with alcohol and Kang Sora and Lee Jae Hoon being chummy, lots of little bits of daily goodness are in store!

Suzy’s Kiss
On February 16, miss A’s Suzy wrote on her twitter “Thank you so much Singapore’s fans. I was so touched by you guys.” (Please note that she wrote all of this in English!)

Min Wants to Eat Fei
On February 16, miss A’s Fei wrote on her twitter, “I’m with Min baby! What is she trying to do to her unni!”

Bom’s Spring
On February 16, 2NE1’s Bom wrote on her twitter, “This will not be included in the magazine. However, I still like a few of those. That’s why! I will reveal it to only you guys. Bom going solo for ‘Allure’ March edition! Please look forward to it.”

Surfer Son Dam Bi
On February 17, Son Dam Bi wrote on her twitter, “I stood! I have talent.”

Go Ara’s Two Sides
On February 17, actress Go Ara wrote on her twitter, “Got my victory pose in at an advertising shoot.”

Kang So Ra’s Smirk
On February 17, actress Kang So Ra wrote on her twitter, “A day I can’t forget! Thank you for coming! Woohoo! I’m so nervous, I might faint in the car.. I got home safely. Wonder if everyone got home safely..”

Secret Supports B.A.P
On February 17, Young Jae wrote on his twitter, “Today is ‘Inkigayo’ comeback! Secret nunas came to cheer us on! Even Zinger nuna who fully recovered came and they are all holding ‘One Shot’ albums! Fighting! Thank you nunas~”

Kang So Ra Misses Lee Jae Hoon
On February 18, Kang So Ra wrote on her twitter, “Jang Ho was missing at the press conference. Are you eating well~?”

Fei, Kwon Sang Woo, Jia and Jackie Chan
On February 18, miss A’s Jia wrote on her weibo, “Ryong oppa’s movie ‘Chinese Zodiac’ is really fun. Thank you for producing and filming. I believe that the audience were touched as well.”

Victoria’s Pride
On February 19, f(x)’s Victoria wrote on her weibo, “I saw a product from my hometown in a foreign country. It seems familiar and I feel pride.”

Baby G-Dragon
On February 21, Big Bang’s G-Dragon wrote on his twitter, “Mom sent me this picture through text.”

Yoon Il Sang’s Meaningful Birthday
On February 21, composer, producer and co-founder of Nega Networks, Yoon Il Sang updated his facebook with the message, “Had a simple birthday party with Brown Eyed Girls. Because we mutually understand, we were on a roll talking about various stories regarding music.”

Cute Ji Yoon
On February 21, 4minute’s Jeon Ji Yoon wrote on her twitter, “We’re like this. This is before we performed our last song ‘Fly So High’ at the concert.” She continued, “I tried to be cute by having my hair up in pigtails for the U-Cube concert in Shin Yokohama.”” She later added, “Sorry… for acting cute…”

PSY Party
On February 21, PSY wrote on his twitter, “With the great @acunilicali, I met the most energetic crowds at @yetenek_turkiye! #BrotherTurkiye”