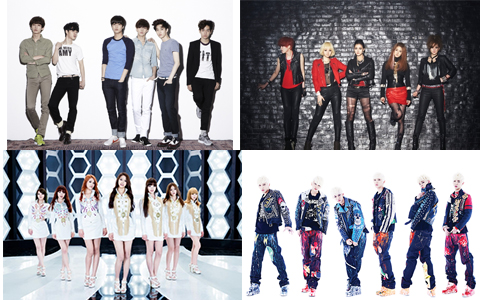 In the videos, the groups are in listed order of their official debut.

Last year was definitely a busy one for new groups as there were a total of 38 new boy groups and 41 new girl groups. Along with normal idol groups, this video also includes bands, duos and sub-units that have debuted.

Looking at the [Infographic] K-Pop Idol Groups that featured the 258 groups from the past 15 years , the debuts in 2012 easily exceeded the record amount of debuts in 2011.

After watching the videos, hopefully you found a new group that you want to learn more about.

Did you recognize many of these new groups? Coming from a known company does help a lot.

Notes:
– The groups are in order of official debut. Pre-debut songs don’t count, with the exception of SPEED who made their real debut in 2013.
– Every group got 15 seconds in. I tried to feature a clip of the chorus and main choreography points, while also trying to show as many members as possible.
– I randomly chose a intro song for both. They are the beginning instrumentals to EXO‘s “History” and SPICA‘s “Russian Roulette”
– Not included: DSP Media‘s new girl group Puretty has debuted in Japan, but not yet officially in Korea. Cutie-L is another girl group that is made up of child actors.
– Adding all the members up, there are 190 boys and 196 girls.