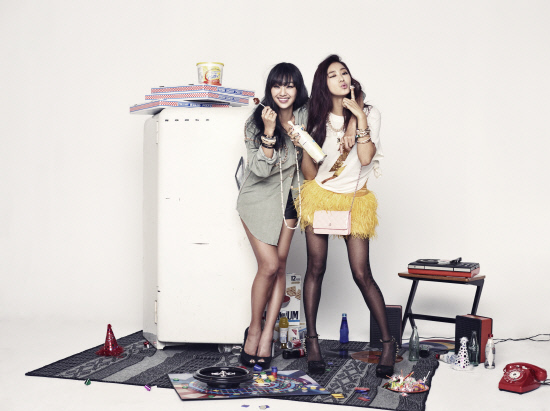 The top three songs remain the same as last week. Sistar19’s “Gone Not Around Any Longer” repeats as No. 1 for the second straight week with a near perfect score of 989 points, impressively gaining 47 points from last week. It is easily the No. 1 song in Korea right now. It should win again next week as there is not much competition yet. Meanwhile, Bae Chi Gi’s “Shower Of Tears” and CNBlue’s “I’m Sorry” remains at No. 2 and 3 respectively.

There are three new songs on the chart this week. Debuting just under the top three at No. 4 is Huh Gak’s new song “1440.” This song is the real title song from his first full length album “Little Giant” and it replaces the preview song “Monodrama” which was in the top 10 the last two weeks. “1440” has a very different style than Huh Gak’s past hits which were mainly sad, emotional ballads. Instead, “1440” is a sweet love song about the exciting and delightful feeling that comes with falling in love. The title “1440″ comes from the first line of the song that goes “I think of you 1440 times a day.” This song brings out a totally different side of Huh Gak. The music video also stars actor Do Ji Han and A Pink‘s Oh Ha Young.

The other two new songs are at the bottom of the top 10. Moving up eight spots to No. 9 is “Love Recipe”, the title song from Clazziquai’s fifth album “Blessed”. It is the group’s first release in three years. The album again features a wide range of songs from electronic to house and acid jazz. “Love Recipe” is composed by Clazzi and written by Horan herself. It is about the sweetness of falling in love.

Moving up four spots to No. 10 is Seo In Kook’s “I Can’t Live Because Of You.” This is a special project single from Jellyfish Entertainment. It is a sweet love song expresses the honest feelings of a person who has fallen in love. Seo In Kook’s sweet voice paired with Verbal Jint’s honest rap lyrics add up to a top-notch love song.