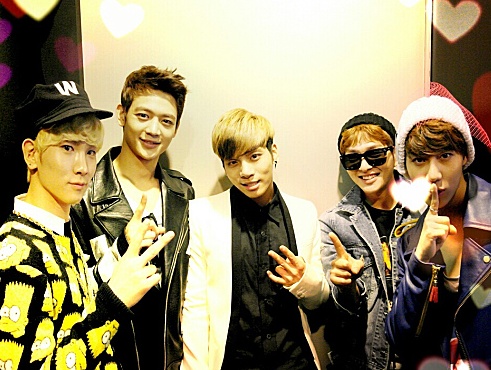 SHINee’s “Dream Girl” was not even in the top 10 last week but made a big 10-spot jump to become our new No. 1 song this week. In the process, “Dream Girl” also unseats SISTAR19’s three week champion “Gone Not Around Any Longer” from the top. “Dream Girl” is the title song from SHINee’s third album, “Chapter 1 ‘Dream Girl – The misconceptions of you’.” It is an electro pop dance song produced by Shin Hyuk.

There are three other new songs in this week’s top 10. At No. 6, it is another top 10 song for rapper Verbal Jint, who already had a top 10 hit back in January with “Good Start.” This time, he teams up with last year’s top rookie Ailee for the song “No Love (If It Ain’t Love),” moving up from No. 29 last week. Composed and penned by the singer himself, this retro-soul number holds lyrics about a man who loves a girl, but fears he isn’t good enough for her. Ailee is featured on two top 10 songs this week. Besides this song, she is also the vocalist on Bae Chi Gi’s former No. 1 song “Shower Of Tears.”

An even bigger mover is at No. 7. Up 25 spots is Kim Tae Woo’s latest hit “Cosmic Girl.” This song is from Kim’s mini-album “T-Love,” his first release in nearly two years. “Cosmic Girl” was created by producer Red Rocket and features a funky rock sound on top of stylish hip-hop beats.

Debuting at No. 10 this week is Teen Top’s “Miss Right.” After debuting nearly two years ago, Teen Top finally released their first full length album “No. 1.” The title track “Miss Right” is a fresh track with an easy to remember melody line. Teen Top was a surprised runner up to Big Bang on our Soompi Gayo Awards male group category last year. “Miss Right” will definitely be another big hit for the group, and this song has the potential to challenge SHINee for the top spot next week.