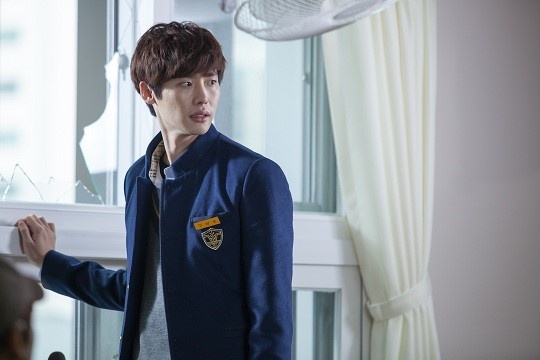 Lee Jong Suk: “I Want to Play the Role of Homme Fatale or Evil Psychopath in the Future”

Watching TV at home has been Lee Jong Suk’s hobby since he was young. He started to aspire to become an actor from watching Rain from “Full House” and Kang Dong Won in “Temptation of Wolf.” But the opportunity presented itself to him in a slightly different way than expected. He first made his debut as a fashion model and then was training to become an idol. During his trainee period, he got a chance to act. As a result, he starred in drama “Secret Garden,” films “Korea” and “R2B: Return to Base.” But “School 2013” carries the most significance to him, since he played the leading role of a show for the first time.

He stated, “I wanted to show myself as an actor, I cared about that more than I did about the ratings. Go Nam Soon is a lot like myself in that he’s a lethargic and timid looking boy and yet fiercely loyal as a friend. As I got more into the character, it even helped me change the tone of my voice from cracking, unstable sound to more stable and grounded tone.”

He is currently filming “Physiognomy” with actor Song Gang Ho. Lee Jong Suk plays the role of Song Gang Ho’s role’s sun in the movie. He commented on his experience of working with big movie stars, “Since I’m the youngest person on filming sets, I feel tremendous amount of pressure. Sometimes I feel like I can’t even breathe. But at the same time, just from being there, being among all these great actors, I feel like I’m learning a lot. Song Gang Ho presents different tones and pitches in filming the same scene, always trying new things. He surprised me recently in a scene where he was slapping across my face, because he just did it without talking about it with me. It just happened.”

He said, “Even though there are a lot of actors in their 20s, I think they lack that certain grave, that groundedness. I am going to try my best until it is natural for anyone to describe me as an actor.”