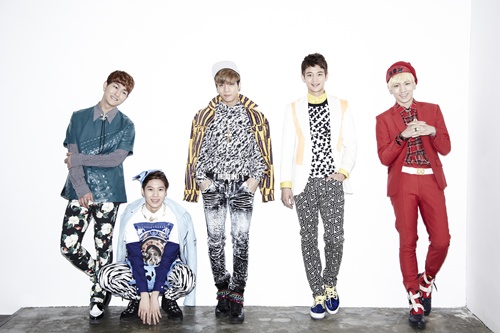 Despite a drop in points, SHINee still firmly holds on to the top spot for the second consecutive weeks with “Dream Girl.” This song is No. 1 on both M!Countdown and Music Bank. It is highly likely that “Dream Girl” will win the Triple Crown next week so it will be the favorite to repeats again as No. 1 on our chart next week.

The competition is catching up though. Moving up eight spots to No. 2 in just its second week on the chart is Teen Top’s “Miss Right.” It ties the group’s previous chart high at the same No. 2 position achieved by “To You” last June. Teen Top is looking for their first ever No. 1 song and “Miss Right” may just be the right song to do so. The group has enjoyed success on our chart in the last two years while moving up the ladder to the upper echelon of male groups.

There are two new songs in the top 10 this week. Moving up 13 spots to No. 7 is Gummy’s “Snow Flower,” coming from the popular SBS Drama “That Winter, The Wind Blows.” This is also the highest charting drama OST songs in a while. Drama OST songs have a general disadvantage on the chart as it is usually not listed on many of our sources, plus most of the songs are not being promoted outside of the drama series. “Snow Flower” is a different story, as Gummy is promoting this song on SBS Inkigayo. It certainly helps to boost the popularity of this song, and will probably become a nominee for this year’s best drama OST songs.

Debuting at No. 9 this week is 2AM’s “One Spring Day,” the title song from their second full length album of the same name. Unlike their previous hits mostly written by Hitman Bang, this time Bang teams up with hitmakers Kim Do Hoon and Kim Ki Bum for the production of “One Spring Day.” It does sound different from 2AM’s usual ballads. As the song title implies, this song is perfect to listen to as we are heading to the Spring season. “One Spring Day” should move up to the top three next week and potentially be a future No. 1 song.