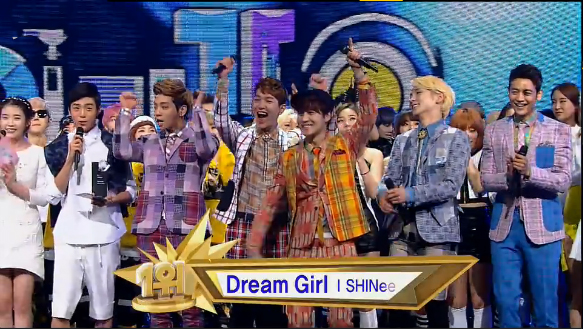 After halting their Take 7+Mutizen weekly winner last summer, Inkigayo has now come back with a new award format!

SHINee‘s “Dream Girl” took the win over Lee Hi‘s “It’s Over” and SISTAR19‘s “Gone, Not Around Any Longer.” Congratulations to the group. They also swept the music show wins this weekend, having also taken wins on M!Countdown and Music Bank.

Teen Top was also joined by famous child entertainer Hwang Minwoo in their performance of “Miss Right” today. be sure to check it out!

Heo Young Saeng makes his comeback performance this week with his third mini album “Life” and title track “The Art of Seduction.”

G.NA Performs “Hate that I love you” & “Oops!” for Inkigayo Comeback Stage

G.NA makes her comeback this week with her fourth mini album “Beautiful Kisses.” Her title track “Oops!” features the rapping of BTOB’s Jung Il Hoon. Her music video for “Oops!” was released earlier this week while her album photoshoot BTS was revealed earlier today.

On their Inkigayo performance of “Miss Right” today, Teen Top was joined by famous child entertainer Hwang Minwoo! Having gained fame last year as “Little PSY,” he recently made his debut as a singer.

Despite the big age difference, Hwang Minwoo was able to keep up with the difficult choreography in the song. Overall, his appearance made the performance very adorable to watch.

Shortly after the performance on Inkigayo aired, Teen Top revealed their interview and dance practice with Hwang Minwoo on their official YouTube channel.