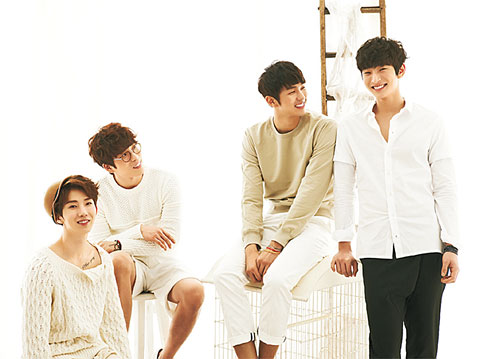 Last week we thought SHINee’s “Dream Girl” would have a great chance to repeat again as our No. 1 song. A new challenger has risen faster than expected, in particular 2AM’s “One Spring Day.” This song moves up eight spots and edged “Dream Girl” by three points to become our new No. 1. It is not a complete surprise as “One Spring Day” won the Music Bank K-Chart this week. 2AM always does well on our chart as this is already the fifth time the group has been on top. Congratulations.

Rounding out an all male group top three is Teen Top’s “Miss Right.” This is the first time in nearly a year that three male groups swept the top three spots. The last time it happened was April Week 3 of 2012 with Busker Busker’s “Cherry Blossom Ending,” CNBlue’s “Hey You,” and SHINee’s “Sherlock” being the top three.

There are two new songs on our chart this week. Just below the top three is Lee Hi’s “It’s Over,” making a 16-spot jump. This song is the title track of Part 1 of Lee Hi’s first full album “First Love” containing five tracks. The full album will be released next week. Lee Hi rocked the K-Pop world last year with “1,2,3,4,” having a very mature R&B voice at such a young age. This song is already took No. 1 on M!Countdown and Inkigayo this week. It has a great chance to overtake 2AM next week.

Moving up nine spots to No. 6 is Davichi’s ballad “Turtles.” This is the preview song of Davichi’s second full length album “Mystic Ballad.” Written by hitmaker Double Sidekick, it is a sad love story about a person who slowly tries to forget one’s lover. Davichi just made their comeback this week with the album title track “Just The Two Of Us.” This song is expected to hit our chart soon.