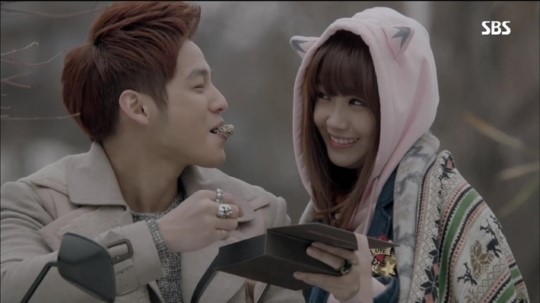 On the morning of the finale of “That Winter, the Wind Blows,” A Pink’s Jung Eunji discussed what it was like to act with Kim Bum.

In the April 3 episode of SBS’ morning talk show, “Good Morning,” Jung Eunji said in an interview, “Because Kim Bum treated me as nicely as an older brother would, I enjoyed filming.” Bringing laughter to interview set, she added, “I felt like a won a prize to have acted with Kim Bum. As a woman, I am very happy.”

Also included in the episode was a clip of fellow actor veteran Kim Tae Woo, who played the villain Jo Moo Chul, praising Jung Eunji’s acting, saying, “[The character of Moon Hee Sun] was able to be a villainous but lovable character because Eunji was able to express the role well.”

The final episode of “That Winter, the Wind Blows” airs tonight, April 3. Hopefully, we can see Jung Eunji again in a new drama soon.