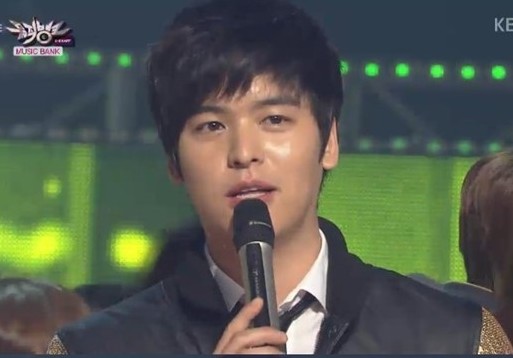 We recently reported on April 2 that Lee Jang Woo and After School’s Uee were stepping down as MCs of KBS’ “Music Bank.” The March 29 episode was the last day for Uee but she was unfortunately unable to say goodbye during the broadcast. Thankfully, Lee Jang Woo, who stepped down one week later, was able to properly say goodbye.

In the final moments of the April 5 broadcast of “Music Bank,” Lee Jang Woo bid his farewells, thanking the staff and his fellow host, Uee. He said, “I am thankful to the producer who was with me from the beginning to end. I am sad that Uee couldn’t be with me here till the end since we worked so well together for a year. Thank you, Uee.” While trying to hold back tears, he also added, “Thank you to the viewers as well!”

Lee Jang Woo and Uee were the hosts of “Music Bank” for the past year and three months. Uee was unable to be with Lee Jang Woo on this day due to overseas scheduling conflicts, and Davichi’s Kang Min Kyung was the special female MC for the day.