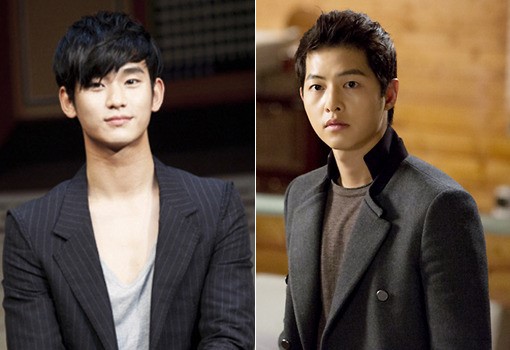 On the April 22 broadcast of tvN’s “E News,” it was reported that Song Joong Ki was originally offered Kim Soo Hyun‘s role in the hit drama, “The Moon that Embraces the Sun.” Song Joong Ki declined the role of the Joseon King Lee Hwon because it was too similar to the role that Song Joong Ki had just played in “ Tree with Deep Roots” as King Sejong.

Song Joong Ki had made headlines with his royal role in the 2011 drama because of his charismatic and powerful portrayal of the young Sejong. The role was even touted as the rediscovery of Song Joong Ki and led to his lead role in the fall 2012 hit drama, “Nice Guy.” Before Song Joong Ki became a nice guy, however, he was offered the role of Lee Hwon for “The Moon that Embraces the Sun,” which he declined. Kim Soo Hyun took the role instead and “The Moon Embraces the Sun” became a huge national hit in the earlier half of 2012, reaching over 40% in television ratings. It also made Kim Soo Hyun a household name with commercials and scripts flooding in to his agency.

Interestingly enough, Kim Soo Hyun is quoted to have stated Song Joong Ki’s portrayal of King Sejong as a model for his role as Lee Hwon.

In related news, Kim Soo Hyun will be making a comeback to the big screen after the blockbuster hit, “The Thieves” with “Secretly and Greatly” in June of this year.