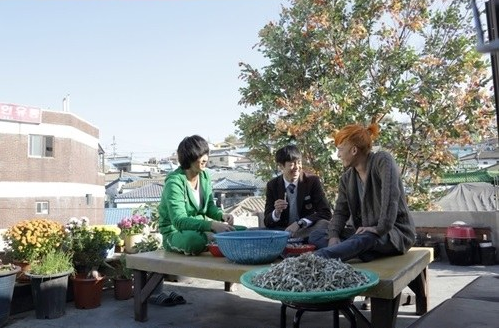 The poster and still cuts for the upcoming movie “Secretly and Greatly” have been revealed, drawing attention to the gathering of “flower boy” actors playing the role of spies.

Kim Soo Hyun plays the lead role of Dong Gu who is the village idiot in a small South Korean town by day, but by night, he is the North Korean spy, Ryu Hwan. Kim Soo Hyun is prominently featured in the main poster for the movie as the character of Dong Gu, wearing a green track suit with cheap rubber slippers. Kim Soo Hyun bears a bright but foolish smile on his face that does not correspond at all to his character’s real identity as a spy.

Park Ki Woong also plays a North Korean spy pretending to be rocker who fails at every audition. He sports bright orange hair in the movie to colorfully portray his character. Lee Hyun Woo completes the spy trio, playing the role of Hae Jin who is a highly skilled, cold-hearted spy pretending to be a normal high school student.

You can watch the trailer for the movie here.

The movie is set to premier in June of this year.