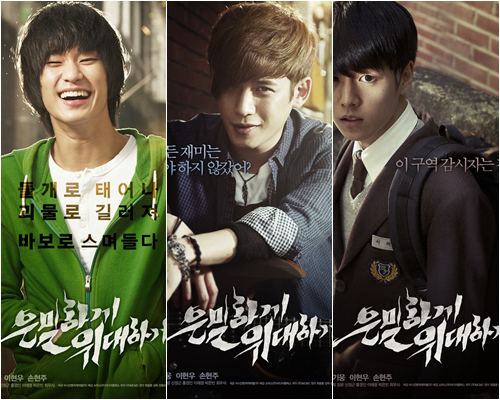 The individual posters for the three leads of the upcoming movie, “Secretly and Greatly” have been released. “Secretly and Greatly” tells the story of three North Korean spies sent to South Korea and each takes on an alternate ego to disguise their true identity. Kim Soo Hyun plays the role of Ryu Hwan, who acts like a village idiot to hide who he really is. Park Ki Woong plays Hae Rang, who pretends to be a guitarist. Lee Hyun Woo takes on the role Hae Jin, who pretends to be a normal high school student.

Each poster prominently features each actor portraying their characters just through their facial gesture. Park Ki Woong gives off a chic smile that portrays Hae Rang’s carefree artist lifestyle. His tagline reads, “Whatever we do, shouldn’t it be fun?” Kim Soo Hyun gives a huge, bright smile to portray the innocence of his alter ego. His tagline reads, “Born as a wild dog, raised like a monster, infiltrate as an idiot.” Lee Hyun Woo’s tagline reads, “I am this neighborhood’s observer.” His eyes portray the tension of being a spy, who must always keep his eyes and ears open.

“Secretly and Greatly” will premier June 5 in theaters.