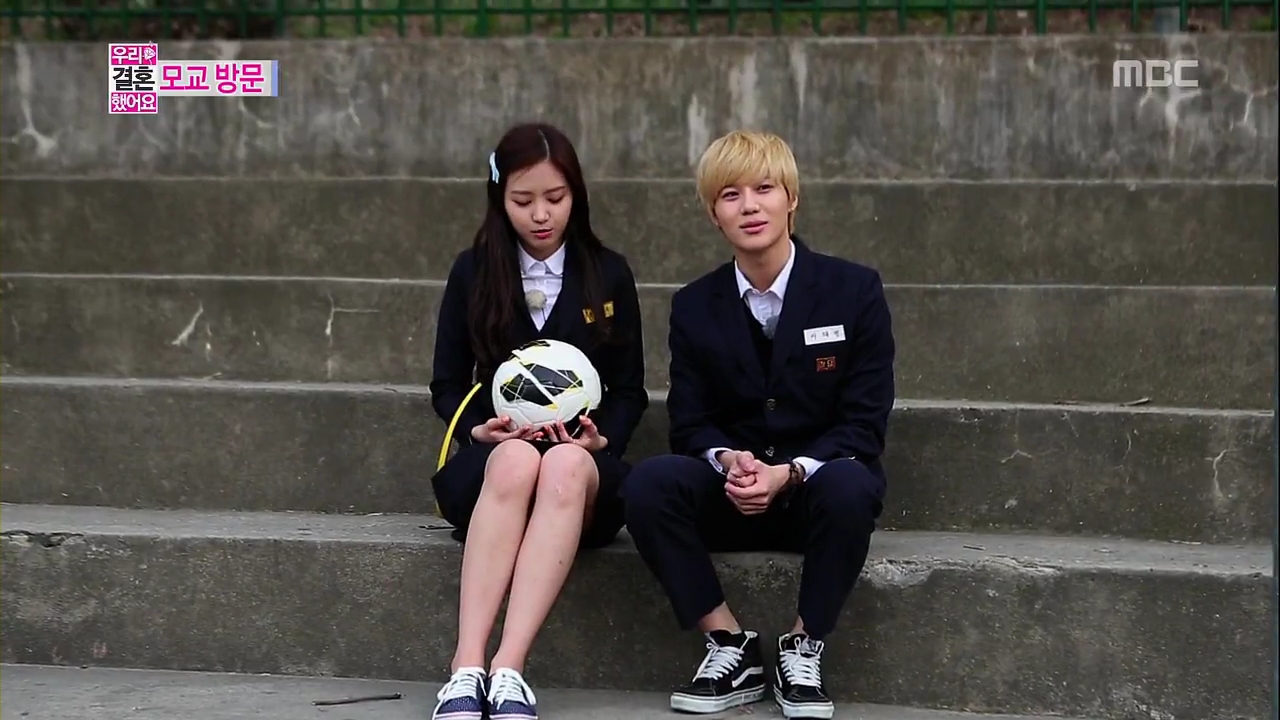 If you missed it, here is last week’s WGM recap: The Hot, the Sweet, and the Confused

On this week’s episode of “We Got Married” Go Jun Hee invites the energetic ’91 Line to throw Jinwoon a birthday party, Taemin and So Na Eun reminisce about their middle school days, and Jo Jung Chi makes Jung In (and everyone else) cry!

The Things We Do for Love – This is your weekly Soompi WGM recap.

If you don’t like at least one person from the famous ’91 Line then you probably don’t like K-Pop (no judgement). The ’91 Line is a group of idols who were all born in 1991 and are friends with each other. Members include SHINee‘s Key, 2AM‘s Jinwoon, Kara‘s Nicole, and MBLAQ‘s Mir. There are others from other idol groups but they don’t make an appearance in this episode.

The kids of ’91 Line know how to have a good time and Go Jun Hee called the right people to help with her surprise Birthday party for her husband. Even though the actress towers over the idols, she became very chummy with them. She exchanged very obvious flattery with Mir, found a bouncing buddy in Nicole, and Key, oh key. Key, Key, Kibum, Key. He comes in with his ginormous shoes and becomes the marriage-slash-Jinwoon expert. Mommy Key came out for a little bit (“This is a little weird because Taemin is also a WGM couple…”) but then he went right back to being his fabulous self.

Next…Taemin and Son Na Eun discover more evidence that the two were destined for each other.

Before I recap their part of the episode, I think it’s important that I address something that Taemin mentioned: Hating on Son Na Eun because she is Taemin’s “wife.”

Taemin is not your boyfriend. Taemin is not your husband. Taemin may be the love of your life but he is an idol. There was a rumor floating around the world wide web that some “fans” started a petition to get Taemin off the show. It was probably true, which is ridiculous. Taemin being on WGM is good for him and it is good for his fans because they get to see more of him.

If you are the type to get insanely jealous and start hating on some poor female because your oppa has been paired up with her, listen up. You are the real life equivalent of the dreaded “Shi-Uhmunee” or the evil Mother-in-Law. In Korean dramas, Mother-in-Laws are stubborn, unreasonable, verbally harsh, and petty. They think the poor girl is not good enough for their precious son so they do what they can do destroy their relationship. That’s you. Don’t be the crazy shi-uhmunee, don’t do it.

If this did not apply to you then I shake your hand, initiating you into the Society of Sane K-Pop Fans (SSKF). Our numbers are few, but we are strong.

Now where were we?

Taemin and Son Na Eun start off awkward but they quickly ease into comfort as they put on their uniforms and visit their middle school. Taemin might have felt a little self-conscious about his uniform being a little too short, but as a former Korean middle school teacher I can assure you that that’s how real Korean middle school boys look. Other than that, they looked pretty comfortable in the uniforms because it hasn’t been that long since they stopped wearing them.

As they roam the empty halls Son Na Eun shows Taemin the exact spot she first saw him at school. Then they find out they were in the classroom in their third years. Which is cool but doesn’t compare to the fact that they would have sat right next to each other if they had been in the same year. Does this sound like a Korean drama to anyone else?

Potential Drama Synopsis*: Son Na Eun is the quiet yet subtly beautiful daughter of a butcher, and when her father’s meat shop is scammed out of all their money, her family is threatened with poverty. To save her family (including five adorable yet naughty younger brothers) Son Na Eun is given away to be the wife of a CEO’s son. As bad as that is, she discovers that her husband is Taemin, her former classmate. In middle school Taemin had been the popular celebrity student who was oblivious to her existence even though they sat next to each other in class. With his glory days behind him, Taemin has turned into an arrogant and emotionally tortured heir to a multi-billion dollar company. With her endearingly quirky personality Son Na Eun warms up the ice cold heart of her husband, but will their love survive when she finds out that it was Taemin who scammed her family?

Everyone Cries – Jo Jung Chi and Jung In Couple.

It is getting hard not to gush about Jo Jung Chi in every recap. Jung In is great and really likable too, but Jo Jung Chi is just so incredibly sweet and sincere. The two have been dating for almost eleven years and there is a reason for that. When are they going to married for real? When are we going to see their musically talented yet adorably awkward babies?

After finding out that Jung In’s health may not be the best, Jo Jung Chi’s love for Jung In gets an extra boost. Their friend and actress, Choi Kang Hee, does make an appearance but the real star of this show is the love letter Jo Jung Chi writes for Jung In. When she reads the letter with the pressed flowers, she cries. When he reads it out loud, he gets all teary and so does the show’s commentators. Everyone cries because it is such a heartfelt and genuine letter.

Best Jo Jung Chi Line: “One time I stayed up all night to re-watch our episodes because you are so cute in them.”

Some of us watch the episodes because of you, you sweet charmer with the Korean-fro.

What did you think of this episode? Enjoyed the recap? Share yours thoughts below!