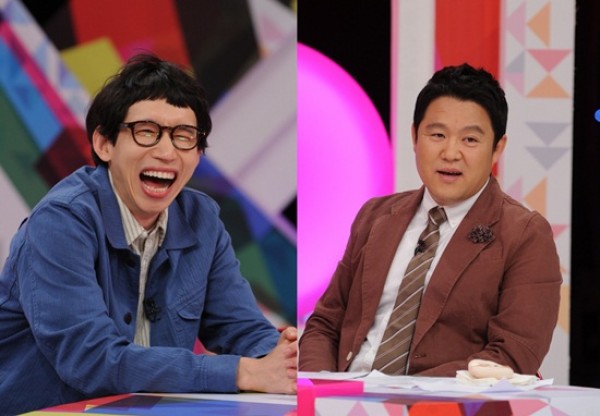 SBS “Hwashin” went through a broad scale reorganization of its MCs.

Entertainer Kim Gu Ra will be joining the cast as a new MC and actor Bong Tae Gyu will be replacing Yoon Jong Shin, who is getting off the show due to his busy schedule and health issues. As a result, “Hwashin” will now have four MCs including Shin Dong Yup, Kim Hee Sun, Kim Gu Ra, and Bong Tae Gyu.

Considering that this restructuring of the show took less than two weeks, “Hwashin” took a rather drastic measure to raise its ratings. “Hwashin” started airing as a replacement for “Strong Heart,” which was widely popular and often the most watched the show of its time slot, but could not win “Strong Heart”s viewers over with its hackneyed talk show format. With Kim Gu Ra joining the cast, “Hwashin” is foreshadowing a change not only in its cast, but also in its contents. Previously, Kim Gu Ra impressed many viewers with his honest and direct comments on various TV talk shows such as MBC “Radio Star.”

Bong Tae Gyu is also garnering much attention. This is his first time hosting a variety show since his debut and yet “Hwashin’s” producer Shim Sung Min saw much potential in him during his first filming. Producer Shim Sung Min commented, “I was impressed. Bong Tae Gyu was able to bring out moving stories and was very quick to respond to different topics and situations. Viewers will be able to see a different side of him because he did just that during the filming session.”

Now the question is whether “Hwashin,” which started airing back in February and yet had not much luck in terms of ratings, would be able to attract more viewers with the overall reorganization of the show and two new MCs.