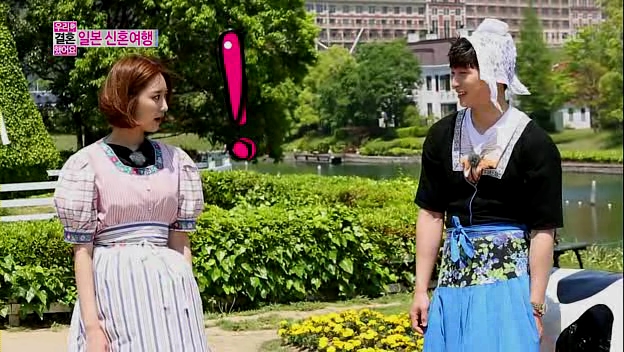 If you missed it, here is last week’s WGM recap – It’s Better With Just Two.

On this week’s episode of “We Got Married”, Taemin and Son Na Eun make sweet music together, Jo Jung Chi officially meets Jung In‘s mother, and Jinwoon and Go Joon Hee celebrate their one hundred days with a honeymoon.

We make the sweetest duet – This is your weekly Soompi WGM recap.

Taemin and Son Na Eun have officially moved into their WGM house! No matter the actual weather outside, it will always be sunny and tropical in their home. It was sweet of the producers to create a Jeju Island theme to remind them of their first awkward date. Plus, the bedroom is perfect for Taemin or Son Na Eun, just not both at the same time. Maybe the producers wanted to make sure there’s no chance of the two ever getting too intimate. What a shame…it would have been hilariously awkward to watch the two even consider lying down on the same bed.

Don’t ever accuse the producers of this show of not knowing what they are doing. They put a piano in the house. What girl can resist a beautiful Korean boy (man? Sorry, not yet Taemin) playing sweet melodies on the piano? Smart move, Taemin, stick to your strengths. He’s actually a good piano player too. He didn’t start playing “Für Elise” or “Chopsticks”, he played…I have no idea what song he played but that just means that it was a pretty fancy song. Just when we thought we couldn’t be even more impressed, he (sort of) improvises to Son Na Eun’s song. It was (almost) enough to make us forget about all the past awkwardness.

Baby Taemin! No further explanation necessary. I’m sure when Son Na Eun was looking at the pictures she was thinking, “So, this is what our future babies will look like. Nice.” At least, that’s what I was thinking.

The producers had done such a great job with the piano they decided to make a dumb decision and give these children knives. Taemin’s nickname is “Magic Hands”, and not in the good kind of “magic hands”, and they gave him some decorative knife to cut fruit. Did they forget what happened the last time they gave him a knife and fruit? Turns out Son Na Eun isn’t that much better. Yikes. Hopefully they will keep all their fingers throughout their marriage.

Jo Jung Chi and Jung In have been dating since 2003 so it difficult for me to believe that this will be the first official time he meets her mother. Jung In mentions that he met her casually a few times before. This is quite suspicious. The two have been together that long and they are not that familiar with their parents? When they do meet there is a slightly stiff atmosphere of unfamiliarity. Perhaps the stiffness came from the fact that Jung In’s mother makes plaster fish art pieces. They say art is interpretative…

The three go back to their home to get to know each other. See, there is something weird going on. How come they hardly know each other? Maybe Jung In’s parents never really approved of Jo Jung Chi (gasp). Jung In’s mom does admit that she never expected them to last this long. Then Jo Jung Chi has to start a weird conversation by telling her that he is the 2013 representative of Korea’s ugliest man. No, baby, don’t say that. You’re beautiful.

Jo Jung Chi tries to win over his future Mother-in-law by cooking a meal for her. Tonight’s menu? Octopus soup and natto rice. He should have just let Jung In and her mother just chill in the living room while he does his thing. She is a Korean mom, Korean moms own Korean food. Were they really expected her just to stand back and watch?

Luckily the food turns out well and it seems that she has warmed up to Jo Jung Chi (the gifts probably helped). “So when are you guys going to stop being fake married and give me real grand children?” is not exactly what she said but she might as well have said it. The three have their different opinions on how the wedding should be, but it looks like they will come to a compromise. Maybe they will even give in and give Jo Jung Chi his dream wedding: A swimming pool wedding where the bride and the groom swim to the alter. Probably not, but wouldn’t that be awesome?

Congratulations to Jinwoon and Go Joon Hee for lasting one hundred days! After taking advice from his 2AM members, Jinwoon plans a romantic overdue honeymoon. The two fly off to a place that looks like the Netherlands but is actually in Japan.

The two decide to put on some Dutch clothing and turns Jinwoon into a lovely Dutch maiden. Jiinwoon fumbles putting the dress on Go Joon Hee which kind of annoys her until she realizes that it’s a good thing that Jinwoon doesn’t know much about the workings of women’s clothing. At least he didn’t say, “I only know how to take them off heh heh heh.”

So much skinship. It’s like they get paid per touch by the sponsors and Jinwoon could use another car. So far he can afford a nice Hyundai but another one hundred days and he could go get a European brand.

Once again Go Joon Hee feels old being next to the young and energetic Jinwoon. Don’t worry Go Jun Hee, the important thing is that the two of you look good together. No one can tell that the two of you are six years apart from just looking. It is not too obvious.

Did I speak too soon? Jinwoon sees some sort of jumping mechanism and flips out, literally. Go Joon Hee on the other hand is thinking, “I’m too old for this shtuff.” Jinwoon is like, “Wee, I’m Iron Man!” Go Joon Hee is like, “I think I’m going to be sick” Jinwoon says, “Look at me! I’m flying! This so much fun! Take my picture!” while Go Joon Hee retreats and does so dutifully like a good mother. That’s not the relationship you two want.

WGM loves their cliff hanger endings. We end with Jinwoon waiting by the hot springs for his wife. Oh ho, he hears her coming, and the producers forget all sublety and turn him bright red. Is she scantily clad in a bikini? Is she wearing nothing but an inner tube? Did she dress up at a teletubby? We will have to wait until next week to see what got Jinwoon so excited.

Jeong Jinwoon
2AM
Go Joon Hee
Jung In
Son Na Eun
Taemin
We Got Married
KPLG
Jo Jung Chi
How does this article make you feel?