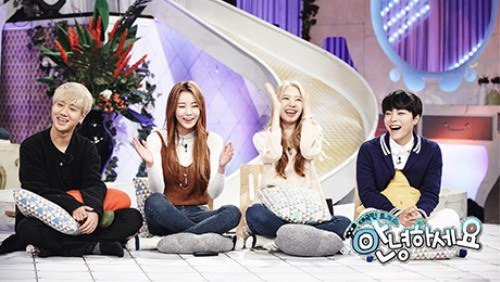 The January 11 episode of “Hello Counselor” will feature Yesung and Park Si Hwan as guests. In particular, this is going to be Park Si Hwan’s first variety show produced by one of the three major broadcast companies.

When Shin Dong Yup asked Park Si Hwan if he had any worries, he said, “I love drinking. However, I can’t sing as well the next day if I drink too much, so that is my biggest worry right now. I really want to drink every day, but I shouldn’t.”

Yesung, after listening to this, chipped in, saying, “I wanted to get to know Park Si Hwan better, so we talked at a pub. He drank about eight or nine bottles of beer.” The two know each other well from having been on “The Awl” together. This information pleased Shin Dong Yup, who is known widely in the industry as an avid drinker, as well, and he said, “I like you!”