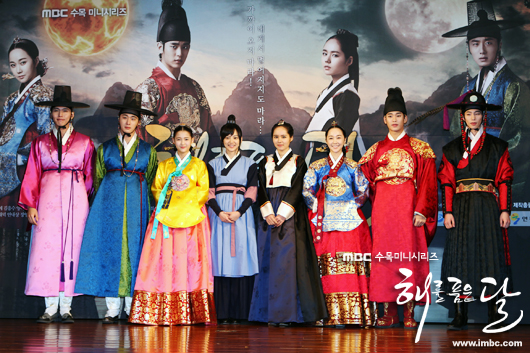 10 Historical Dramas with the Most Gorgeous Costumes Ever

The best thing about watching historical dramas is drooling over the outfits! Nothing that gets me more hyped than seeing stills from an upcoming historical with characters in their stunning robes and beautiful embroidery. Why? There’s a bit of a vicarious element. There is little to no reason why I would ever wear an elaborate hanbok, baller headdress, or 10 layers of intricate gold-trimmed robes, but I can watch beautiful people do it onscreen and pretend I’m them (don’t pretend you’ve never done it)!

To me, the outfits are really important in historical dramas because in modern dramas, you see people dressed in all sorts of outfits: at-home clothes, office clothes, workout clothes, etc. But in a historical one you usually only see two or three outfits, tops! So, the more eye-catching and well-made the clothes, the more impact the character is likely to have on the viewer, and consequently the more you enjoy the drama. Of course, this also definitely depends on a strong story and amazing actors, but in the end, gorgeous costumes can make or break a drama for me. Below are some of my favorites! 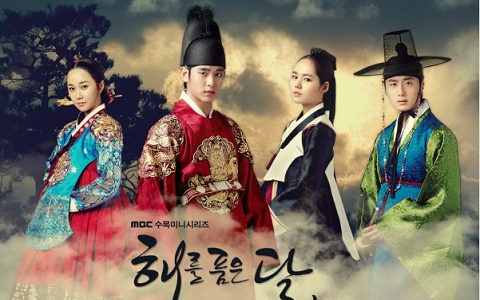 “The Moon Embracing the Sun” was a big hit when it came out! It was beautifully filmed, and I just fell in love with all the colors. A story about star-crossed lovers that really brought to mind “Romeo and Juliet,” I was so enamored I watched it twice! Young Prince Lee Hwon (Yeo Jin Goo) meets and falls in love with young Heo Yeon Woo (Kim Yoo Jung). Unfortunately, palace politics tears them apart and Yeon Woo succumbs to foul play. Fast forward eight years, and the presumed dead Yeon Woo is now a shaman with no memories of her past! The adult Lee Hwon (Kim Soo Hyun) and adult Yeon Woo (Han Ga In) must overcome innumerable obstacles to recapture that childhood love they shared with each other!

The Empress of China 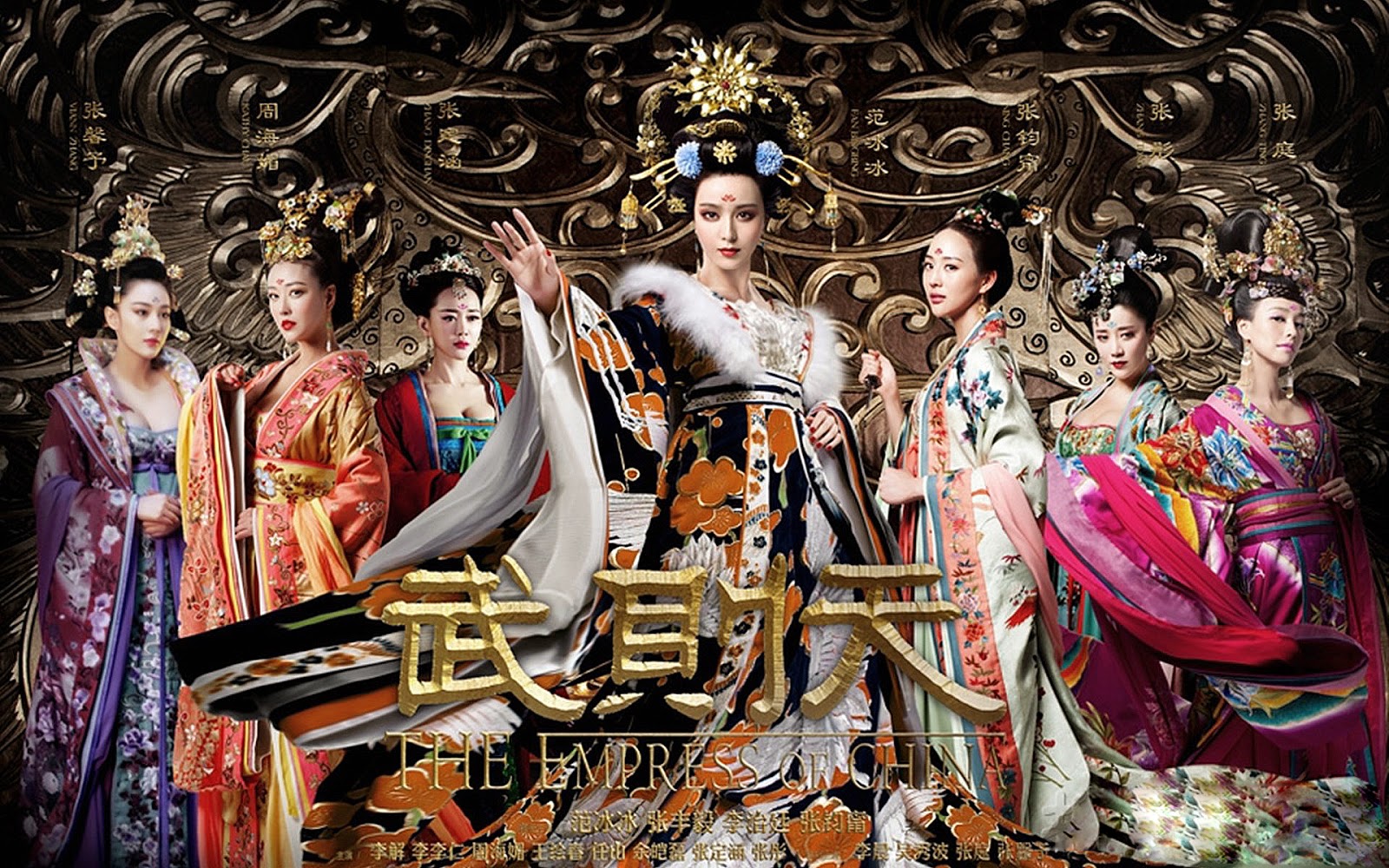 Oh man, the amount of money they must have dropped on the outfits for “The Empress of China”! The clothes were incredibly flattering, and the vibrant colors really helped draw attention to, well, let’s just say everyone’s assets (they were not shy about showing some skin). Clothing aside, the drama focuses on the famous empress of China, Wu Mei Niang (Fan Bingbing). She claws her way to power, going through two husbands in the process, and exacts revenge upon the unworthy, all while dressed impeccably. How could you not admire her? 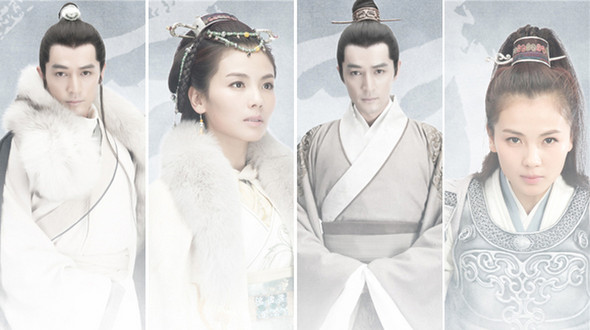 The incredibly popular “Nirvana in Fire” is a feast for the eyes. The clean lines of everyone’s costumes, the surprisingly well-done CGI, and serene settings all lend itself to a spectacular sense of artsiness. This revenge story stars Hu Ge as the main character, aka the man with many aliases (Lin Shu/Mei Changsu/Su Zhe). He grows up vowing vengeance against those who wronged his family, becomes a master pugilist and returns to court to help childhood friend Xiao Jingyan, the Prince of Jing (Wang Kai) become emperor. There’s a reason everyone’s been raving about this!

I love the gorgeous hanboks in “Dong Yi”! A Korean drama about commoner Dong Yi (Han Hyo Joo) who starts off as a lowly maid in the palace, and then catches the eye of the king himself! She becomes his concubine and eventually bears him the ever-coveted son. Based on a real life story (but of course, you know, with some dramatization), it’s a great drama for a history buff! 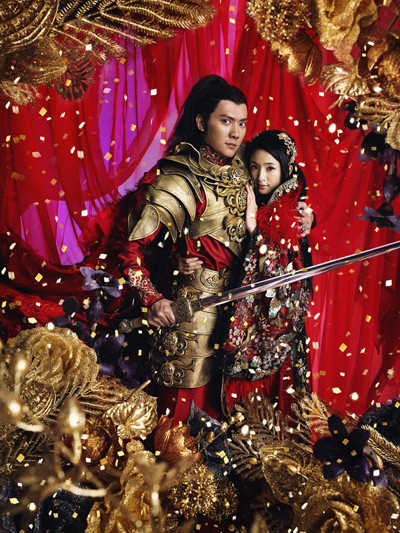 When a series is about one of the four most gorgeous men in Chinese history, it has to walk the talk, and I think “Lan Ling Wang” does just that. Not only does the drama have a pretty good-looking crew, it has the outfits to complement them as well. The setting: two nations at war. The victor? Whoever gets the priestess’ blessing. It comes down to Gao Changgong (Feng Shao Feng), the general of the Northern Qi Kingdom and the Prince of Lan Ling (Lan Ling Wang), who is so devastatingly handsome that he has to wear a mask whenever he goes into battle, and Yuwen Yong (Daniel Chan), the emperor of Northern Zhou. Yang Xue Wu (Ariel Lin), the last priestess, falls in love with Gao Changgong despite foreseeing a tragic end for him, and desperately tries to help him. 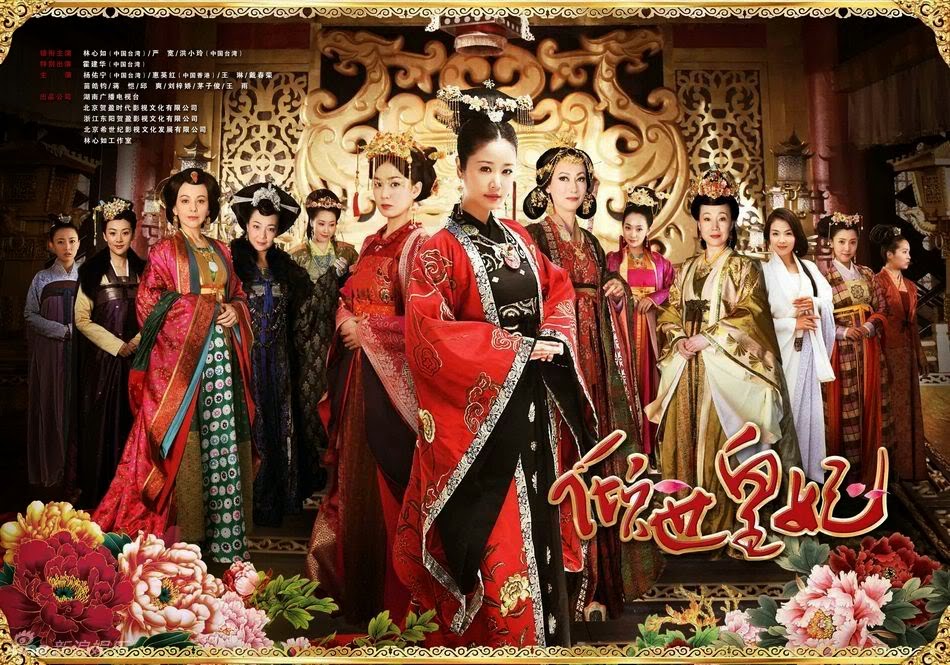 Wallace Huo, Ruby Lin, and fur! All the fur! As much fur as you could ever want! What more do you need? But forreal, “The Glamorous Imperial Concubine” is a great drama, and not just because I love the stunning high-waisted outfits! This story follows Ma Fuya (Ruby Lin), a princess-in-exile during the Five Dynasties and Ten Kingdoms period, as she seeks to avenge her murdered family and regain power. Along for the ride are two princes from different kingdoms who fall madly in love with her… Meng Qi You (Kevin Yan) and Liu Lian Cheng (Wallace Huo). 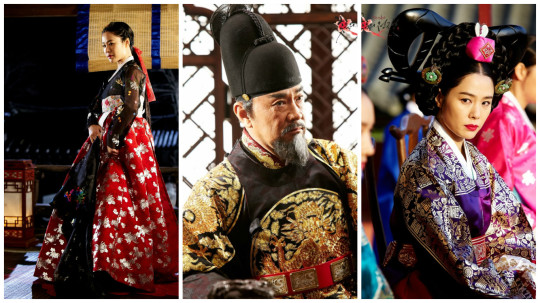 I sobbed from both the sheer drama and the stunning outfits in “Cruel Palace – War of Flowers.” This incredibly complicated drama draws you in to the extreme, and you can’t help but feel for each character. Lowly Jo So Yong (Kim Hyun Joo) just wanted to marry her childhood sweetheart Nam Hyuk ( Jun Tae Soo), but fate stood in her way. Instead, through the machinations of the disgraced Kim Ja Jeom (Jung Sung Mo) she becomes a concubine to King Injo (Lee Duk Hwa) and becomes embroiled in palace politics as she fights to gain power for herself. A fascinating take on Korean history, it is a must-see!

The Legend of Zhen Huan 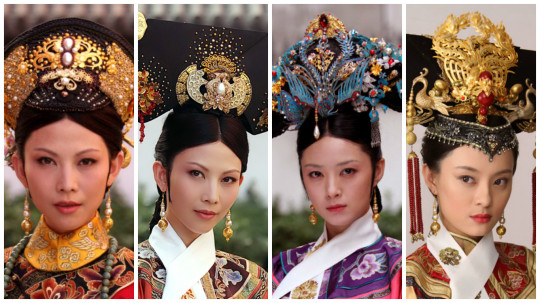 “The Legend of Zhen Huan” is an incredibly epic Chinese court drama (76 episodes!!!), but I was especially enamored of the stunning headdresses and accessories. The clothes themselves are all exquisite, but it was fascinating to see the change in all the accessories – as concubines rose in rank and favor, everything they wear becomes increasingly more and more elaborate (and really, how do they hold their heads up under all that?) This incredibly realistic look at harem politics follows young Zhen Huan (Sun Li), as she becomes a concubine and battles for a power and prestige. After watching this, you will have a very, very thorough understanding of just how cutthroat women can be to one another… As well as how unfeeling a king could be to his concubines… 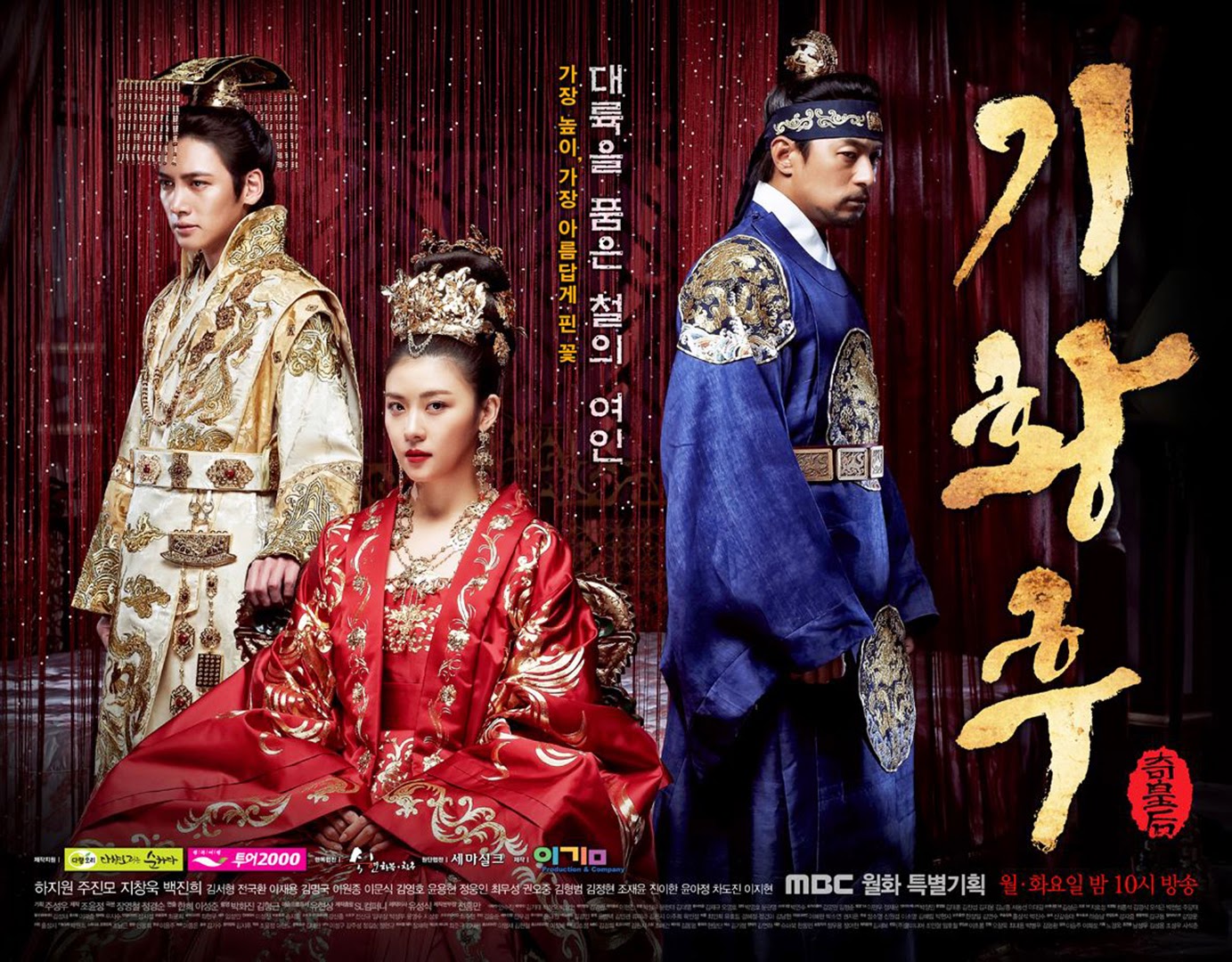 One of my personal favorites is “Empress Ki”! The colors are just so intense and the robes made me want to time travel back to the Yuan dynasty to see if I could get my hands on one. Starring the gorgeous Ha Ji Won, it chronicles the life of a Koryo woman who makes some tough decisions and rises to become an empress. The gripping storyline is about her entanglement in not only a love triangle between the Yuan and Koryo leaders, but also the struggle between the two nations themselves. The drama is long, but definitely worth it! 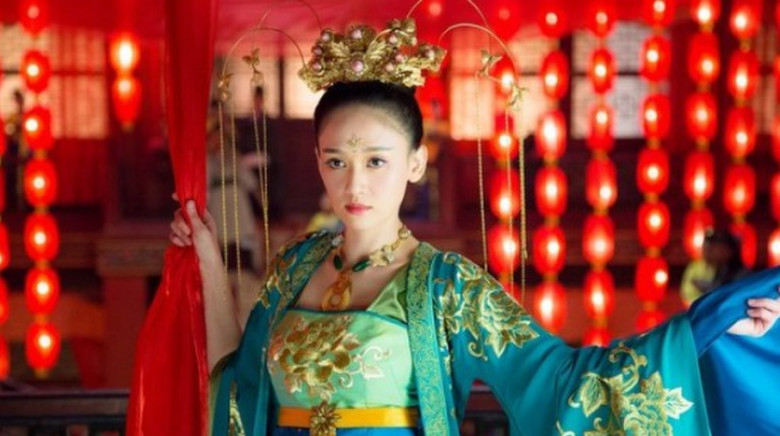 I don’t know if this is considered a historical, but I have an absurdly large soft spot for Louis Cha (Jin Yong)’s wuxia novels and their drama adaptations. The 2013 “Swordsman” is the newest (and perhaps maybe even the prettiest?) version of the “The Smiling Proud Wanderer,” starring the ever charismatic Wallace Huo, as Linghu Chong. He’s been pretty prolific in the historical genre, but there’s a reason he’s a mainstay (and it’s his face [but also, okay, his acting]). This drama centers on cheerful orphan Linghu Chong and his convoluted martial arts journey full of love, loss, and betrayal. While the story veers from Louis Cha’s canon, it features a noteworthy group of beauties, with Joe Chen as Dong Fang Bu Bai (pictured above), Mabel Yuan as Ren Yingying, and Yang Rong as Yue Ling Shan. Joe Chen’s take on Dong Fang Bu Bai is one of the biggest reasons to watch this drama, as she really brings a whole new angle to the story. Come for the pretty visuals, stay for the story!

Which drama do you consider the best eye candy?