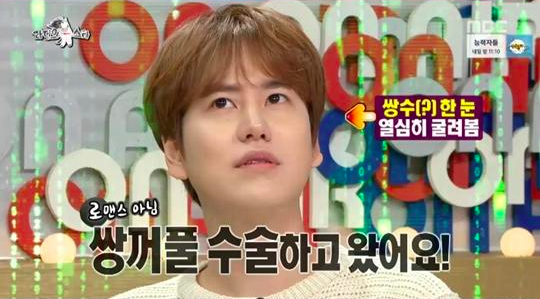 This episode featured Lee Seung Chul, Dana, Kangin, and Brave Brothers as guests on the show.

Dana explains that she and Kyuhyun were both part of the musical “The Musketeers.” Dana states, “Kyuhyun did not show up for musical practice for about a week. I thought he was traveling abroad, but when he came back he looked like a different person.”

Thereafter Kyuhyun revealed to Dana that he got his eye lids redone, explaining his week-long absence.

Kyuhyun added to the story, “Before debuting my management company suggested that I get double eye lid surgery to soften my image, but after five years the double eye lids started to disappear. I thought guys without double eye lids was the trend, so I wasn’t thinking about redoing them.”

However, Kyuhyun confesses he was so used to his double eyelids that when they actually disappeared, his strange mono-lid image prompted a double eyelid re-do.

Kyuhyun
Radio Star
How does this article make you feel?