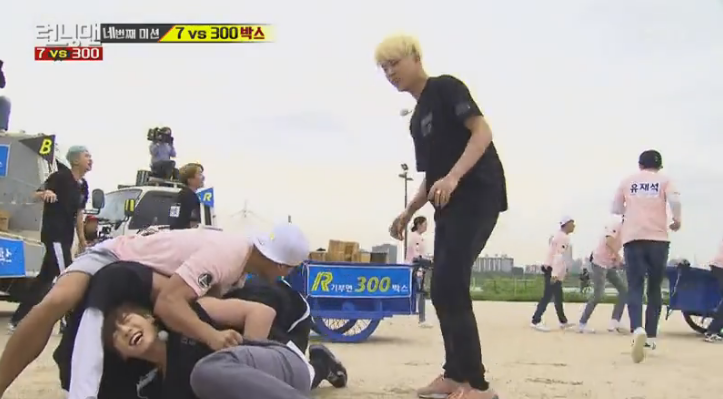 In a playing field stacked with 300 boxes of ramyun, the guys of BTS and the “Running Man” cast are each given a cart. Using the cart, they have to try to load as many boxes of ramyun as they can onto a truck at the other side of the field, and whoever gets the most boxes on their truck will win, with the boxes donated in their name to those in need. The losers will have to make a donation of the same number of boxes on their truck! In addition, if the “Running Man” cast wins, they will get one of the puzzle pieces for their episode’s mission, which they desperately need. 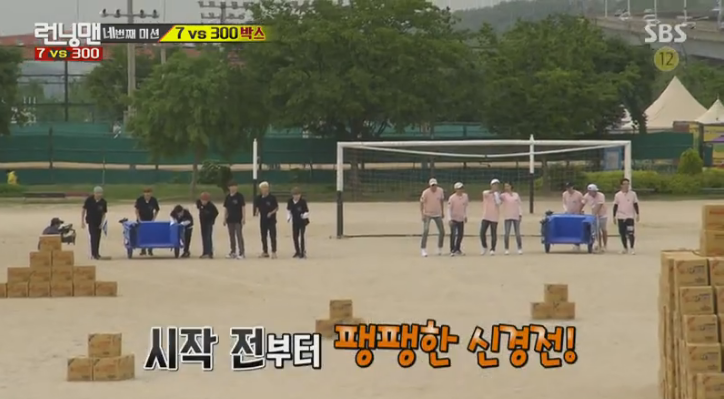 The game is naturally intense from the start, and Suga gets the first point for his team by not even waiting for the cart and simply racing ahead and grabbing a box to throw it on the truck.

Meanwhile, J-Hope, Jimin, and Rap Monster push their loaded cart to the truck, but Lee Kwang Soo tries to intercept them! Jimin, running up from behind, grabs onto Lee Kwang Soo and for most of the rest of the game, never lets go. With Jimin hanging onto his back, Lee Kwang Soo later sadly yells, “I want to take some! I want to stop them!” but Jimin just laughs and secures his hold on him. 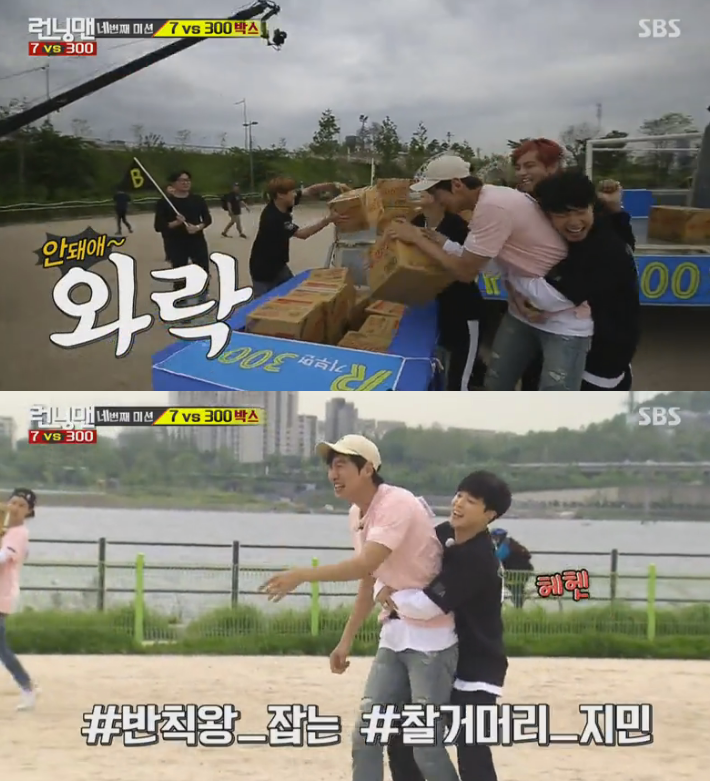 At first, BTS isn’t used to the tricks of the veterans in the “Running Man” cast, who keep playing dirty by doing things like grabbing their cart as they’re trying to load boxes off it. Jungkook catches on quickly though and tries to get revenge by offloading some of the boxes from the “Running Man” cast’s cart back into the pile! 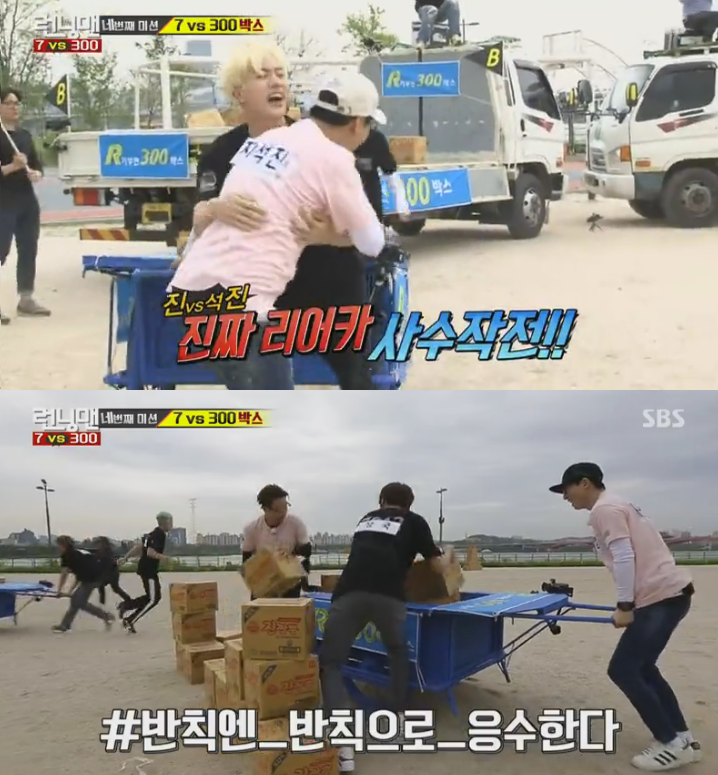 BTS even gets lucky when Yoo Jae Suk gets confused and starts piling boxes onto BTS’s truck. “Oh, thanks, hyung!” says Suga, as the BTS members are stealing boxes from the “Running Man” cart. “This isn’t ours?!” yells Yoo Jae Suk in horror. 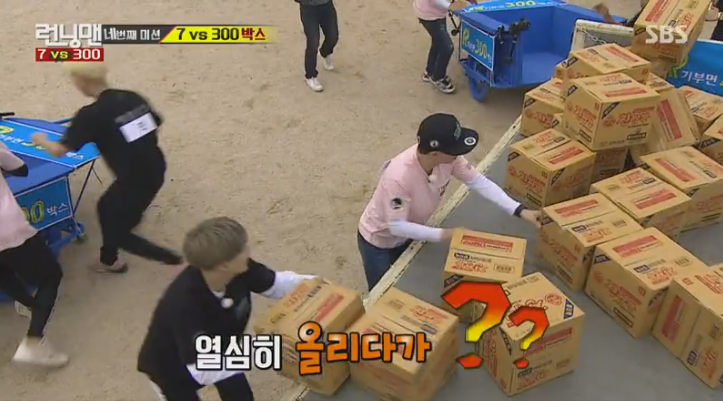 Meanwhile, Gary and Kim Jong Kook are slowly but steadily taking tall stacks of boxes over to their truck. “Why are those kids working so hard?” asks Gary. To their surprise, Suga’s now totally got the hang of this game, and he runs over and knocks Gary’s tall stack right out of his hands.

This is the final straw for Kim Jong Kook, who decides to use his strength to their team’s advantage. He walks over to the BTS truck, easily grabbing Suga, Jungkook, and then Jimin off Lee Kwang Soo’s back, holding them all underneath him as they try to break free. Jin is left hovering over them helplessly, just yelling, “What is this?!” 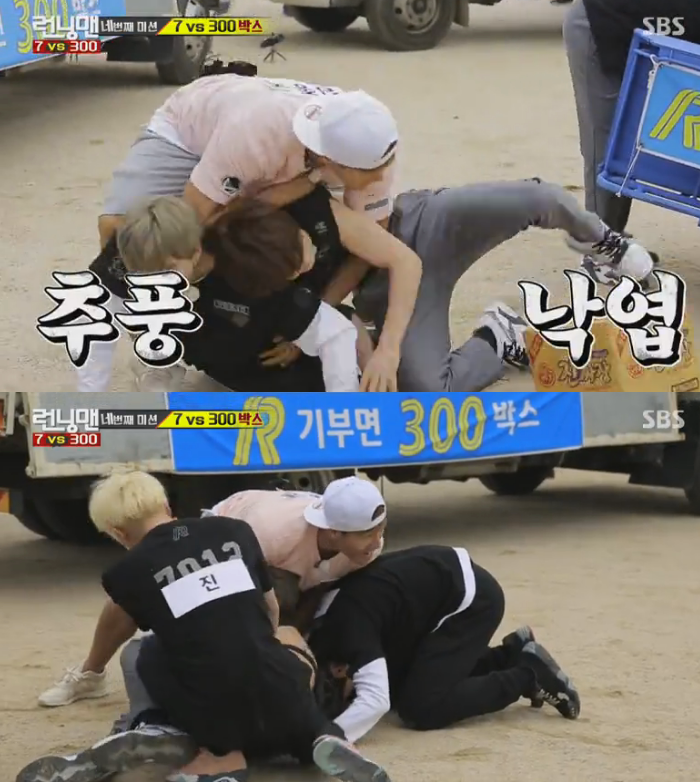 Watch the full clip of BTS’s appearance on “Running Man” below to find out who wins the game!