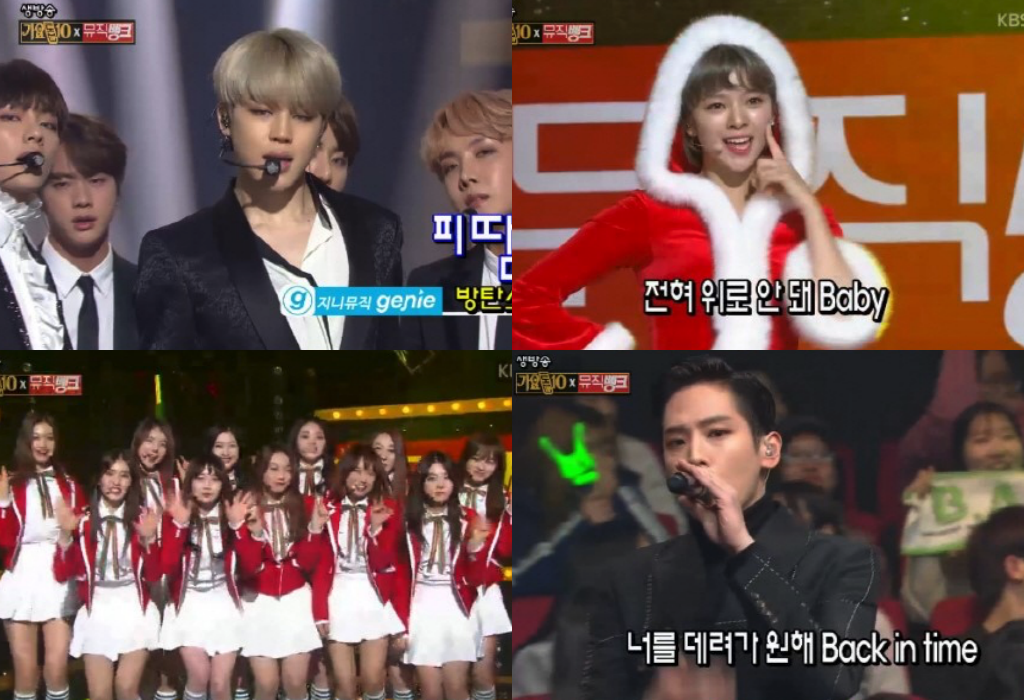 The December 23 episode of KBS2’s “Music Bank” was a special “Gayo Top 10 X Music Bank” event. “Gayo Top 10” was the old name for “Music Bank.” The show featured a blast from the past as groups covered various 90’s songs. There were even some special remixes where artists covered various hit songs from 2016. Some groups even covered other groups’ songs making K-pop fans’ dreams come true.

The winner for today’s episode was not revealed during the broadcast. The results will be updated on the show’s official website later.

Check out the special performances below!

Cosmic Girls covered girl group songs from the second half of 2016 which included Apink’s “Only One,” Wonder Girls’s “Why So Lonely,” SISTAR’s “I Like That,” Unnies’ “Shut Up,” LABOUM’s “Shooting Love,” Red Velvet’s “Russian Roulette,” and their own song “Secret.”

Year-end ballad remix (performed by N.CA, Han Dong Geun, Soul Latido, and Big Brain)
-Sandeul’s “Stay As You Are”
-Ailee’s “If You”
-Urban Zakapa’s “I Don’t Love You”
-Im Chang Jung’s “The Love I Committed”
-Park Hyo Shin’s “Breath”
-Davichi’s “Beside Me”
-N.CA’s “Next Station”
-Han Dong Geun’s “Amazing You”