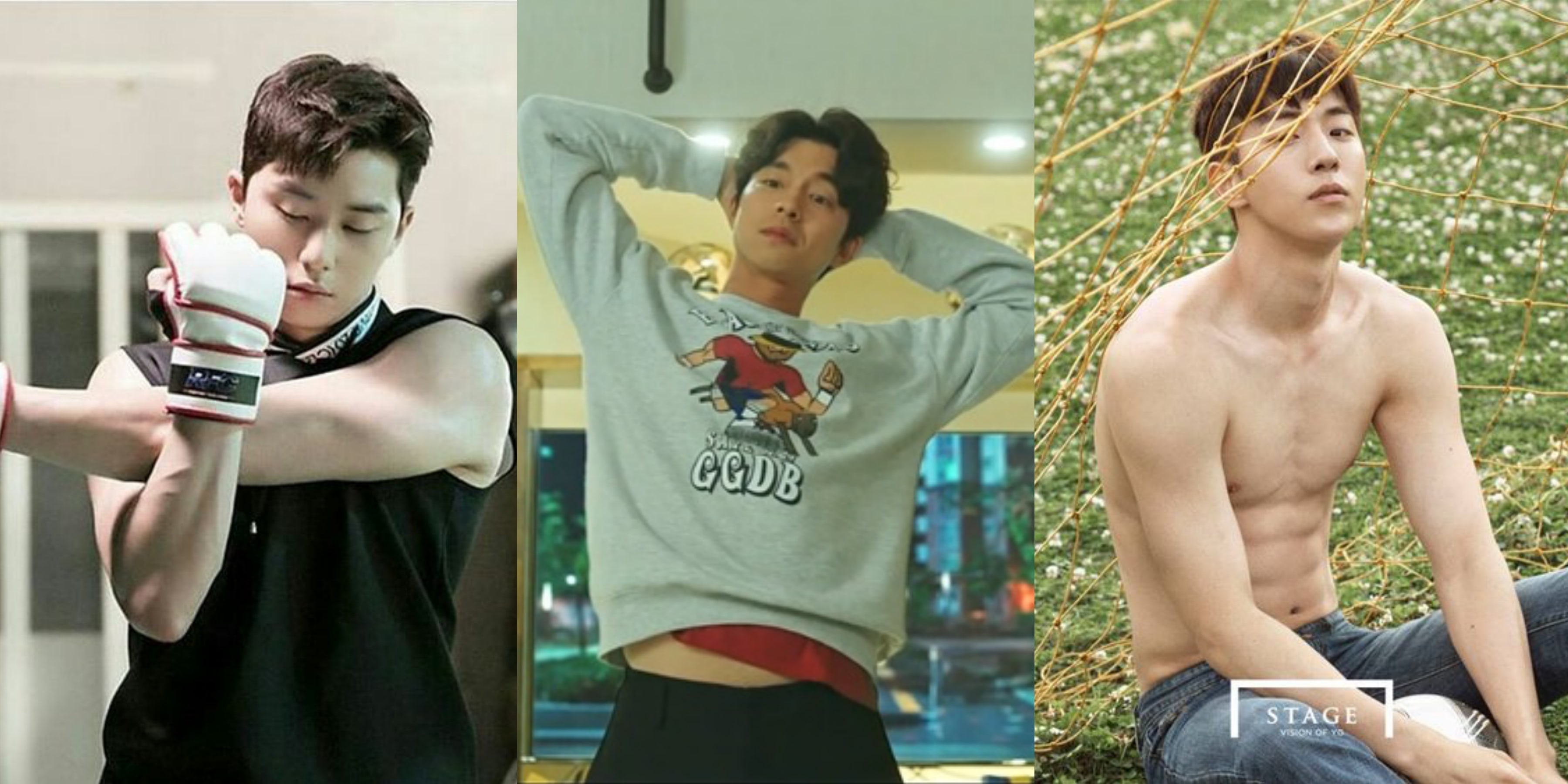 The Definitive List Of K-Drama Actors With Wonderfully Broad Shoulders

Due to popular demand (and after everyone got shookt from our list of male idols with broad shoulders), we decided to wrote another article but this time about actors who make you want to break into the TV screen and run into their arms. If there’s one thing that’s overflowing in K-dramas, it’s actors who will not only charm you with their heart-wrenching acting, but also with their well-toned, strong physiques. 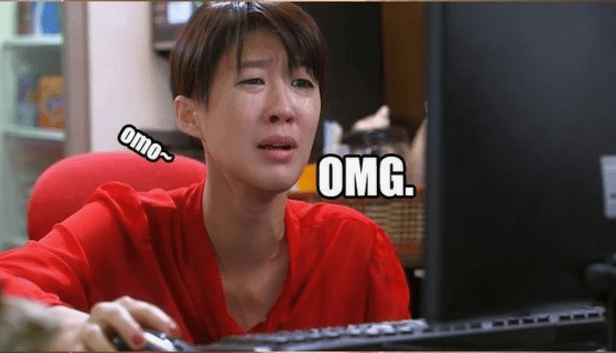 A pretty face with a beast-like body

It’s the best combination since peanut butter and jelly, and ramyun and kimchi.

Well, who can say no to Song Joong Ki? Even though he’s basically off the market and rightfully captured by one of Korea’s biggest K-drama actresses, he is still practically the nation’s ideal type. Watching him in his role as army Captain Yoo Shi Jin in the popular hit drama, “Descendants of the Sun,” his wide shoulders and incredibly cool stance will make you want to give him a salute! 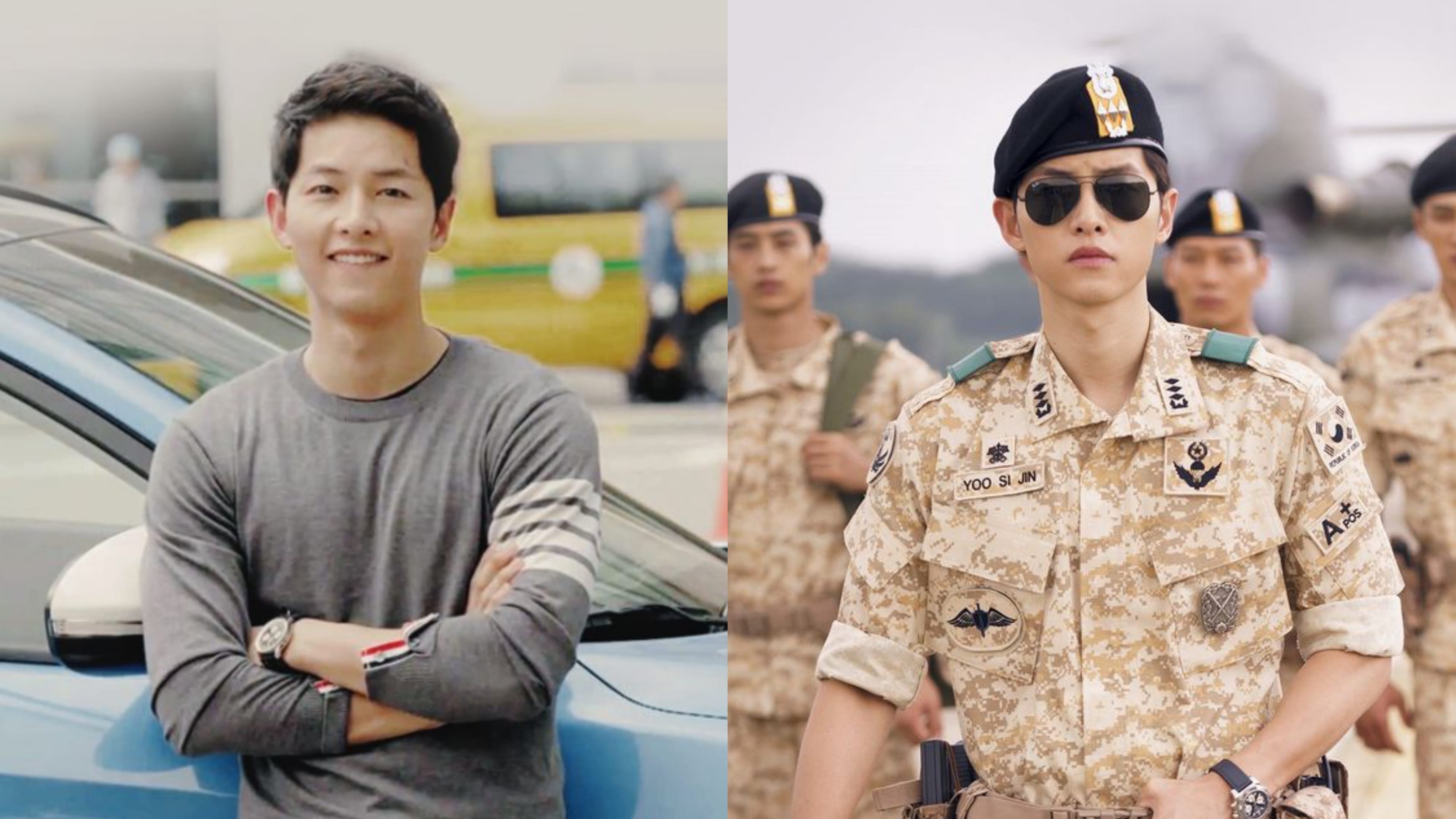 Re-live the reel-to-real love story of the Song-Song couple and watch all the swoon-worthy moments here:

You can’t include a list of K-dramaland’s most beautiful without Kim Soo Hyun. His charm comes with a double-edged sword: a baby face and a killer body. His sincere acting and genuine personality are more than enough to make girls faint — and hopefully land on his solid shoulders. 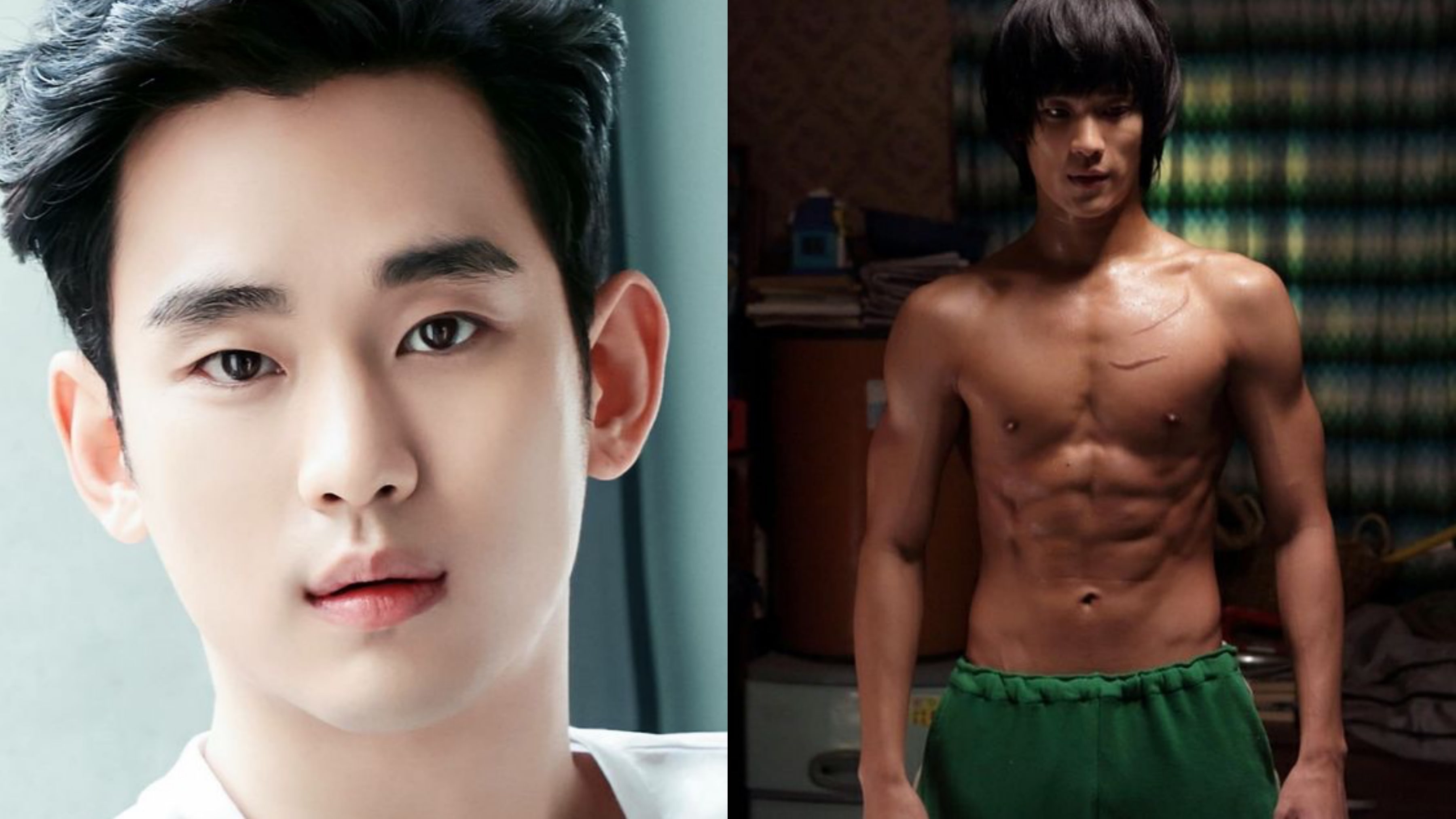 Can you believe these two photos are of the same person?

Catch Kim Soo Hyun in the first episode of “My Love From the Star” below:

At first glance, Nam Joo Hyuk seems like your typical pretty boy next door. But behind his youthful looks, tall height, and slender figure, he is hiding broad shoulders that made him the perfect guy to play the role of a swimmer in “Weightlifting Fairy Kim Bok Joo.” It’s no wonder he’s also literally a god in “Bride of the Water God.” 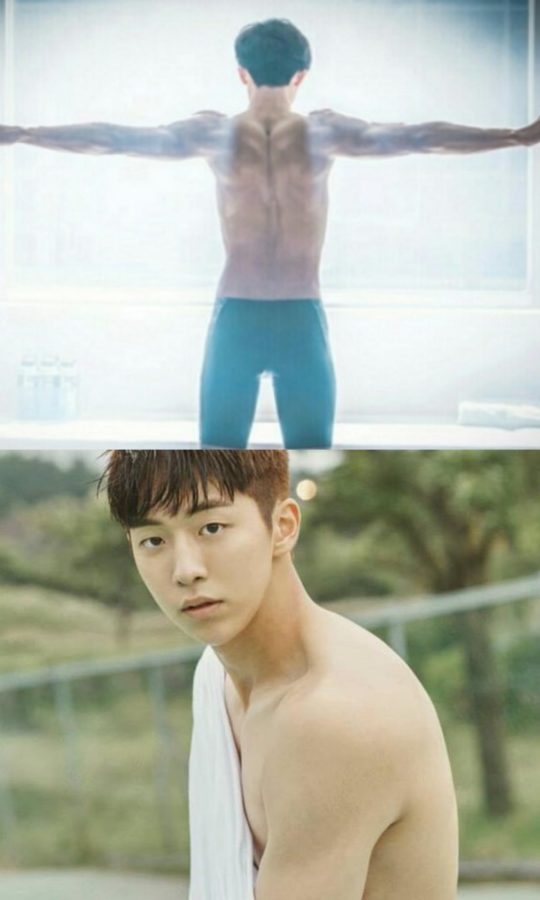 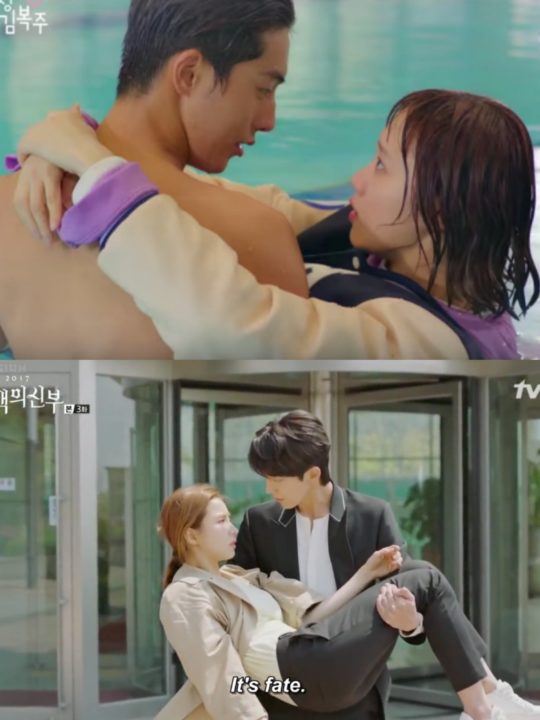 His arms are made for catching girls who have fallen head over heels.

Watch him flex his godlike powers in the first episode of “Bride of the Water God” below:

Ji Chang Wook is all about subtlety. His acting is not over the top, and his slightest smile can disarm even the most indifferent lady. Even with just a hint of his shoulders you can tell he’s like the men in this category who have the best of both worlds: a handsome face with a great bod. 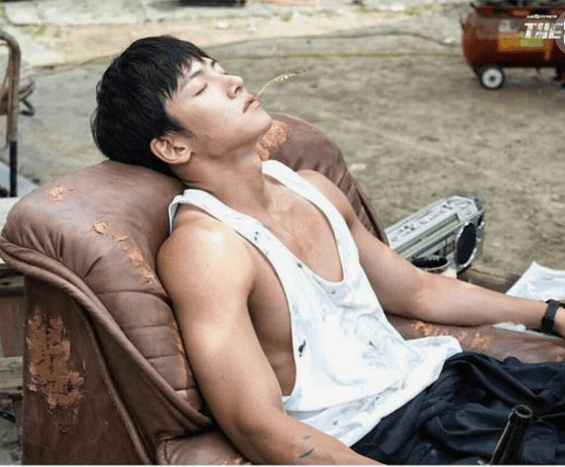 Watch him flex his brain and brawns as a smart aleck lawyer in the first episode of “Suspicious Partner” below:

Lee Jong Suk’s versatility in acting enables him to play a variety of roles alongside young or older characters. Having acted with the likes of Han Hyo Joo and Lee Bo Young and given us all the feels definitely makes him more of a noona killer.

Men who look good all covered up

There’s something about a guy who is sexy even without taking his clothes off. These actors prove that they can be all covered up, but they still can’t hide their “M” line (a term used to describe wide shoulders and a slender waist for men).

If there’s a reason why “Goblin” became a national craze, it’s Gong Yoo. Who knew turtlenecks and heavy knits could be so attractive? Even with layers upon layers of fabrics, he still brought the heat last winter! 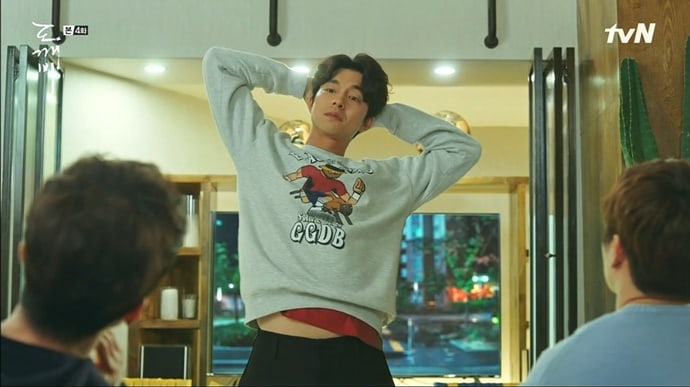 The same goes for Gong Yoo’s partner in crime, Lee Dong Wook. As the grim reaper, his wardrobe is as dark as his soul. But you can tell he’s got them big shoulders. 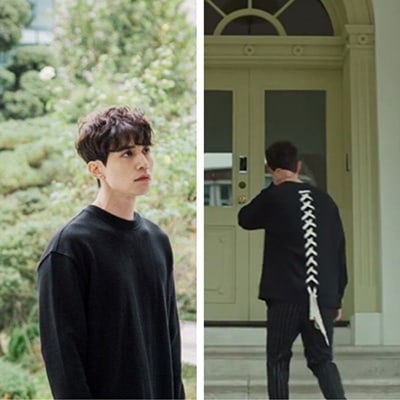 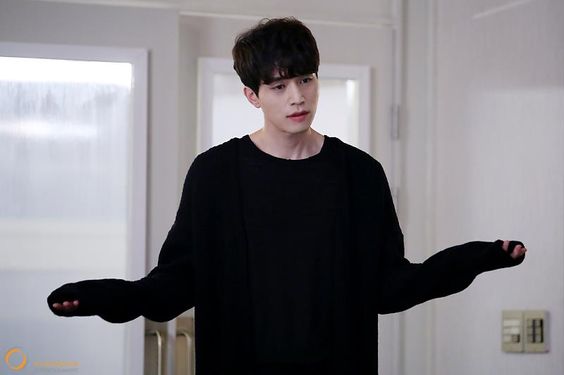 Yoo Ah In pretty much wore every kind of high-waisted pant in “Chicago Typewriter,” but he pulled it off. Armed with his confidence, cool nonchalance, and his killer shoulders, he would still look great even if he wore a sack. 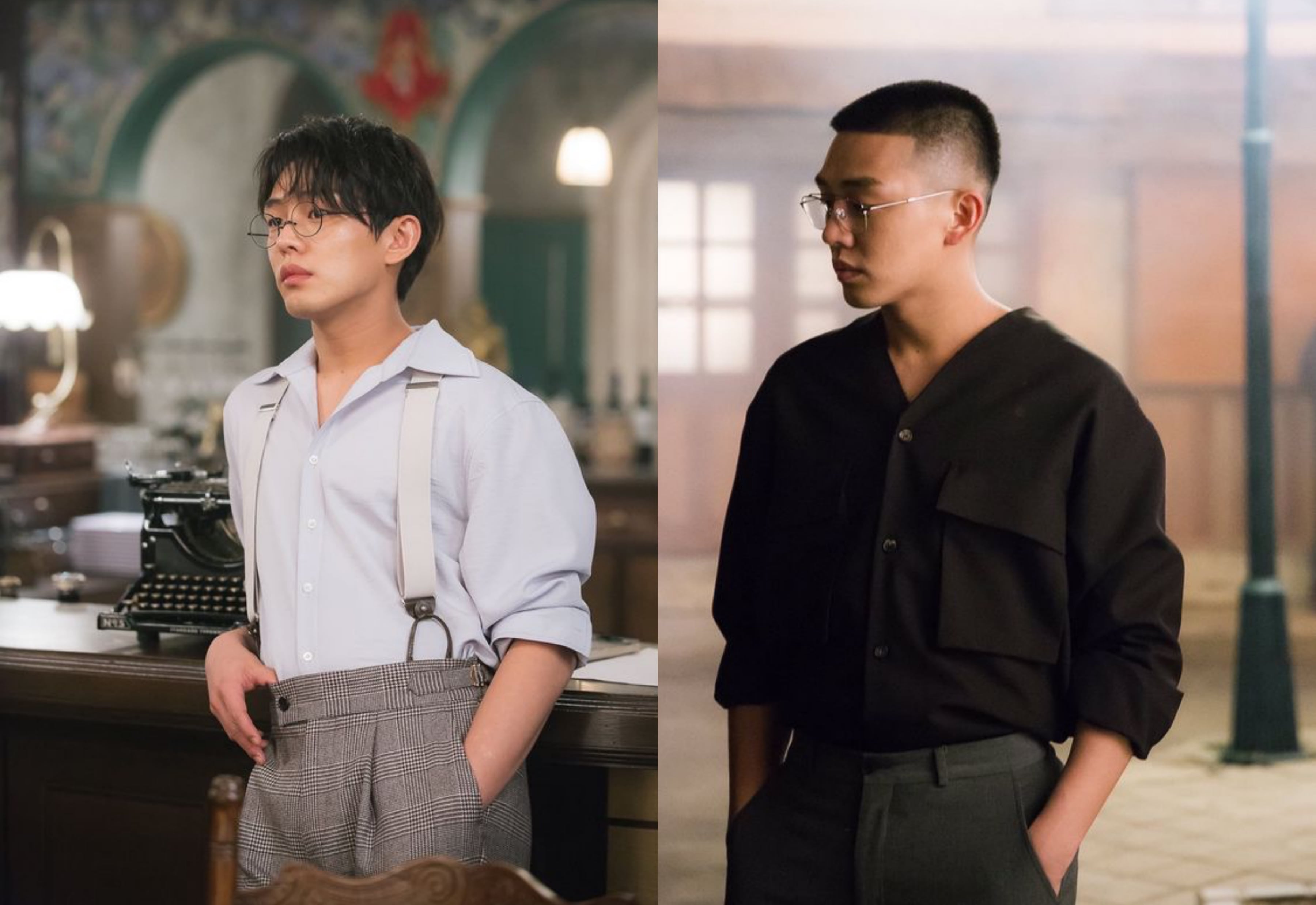 Check out his impeccable sense of style in the first episode of “Chicago Typewriter” below:

These actors are literally heavy lifters. They have chests and shoulders that are broad, but their hips and waists are narrow.

With his role being a Taekwondo-athlete-turned-MMA fighter, Park Seo Joon made sure he looked the part in “Fight My Way.” 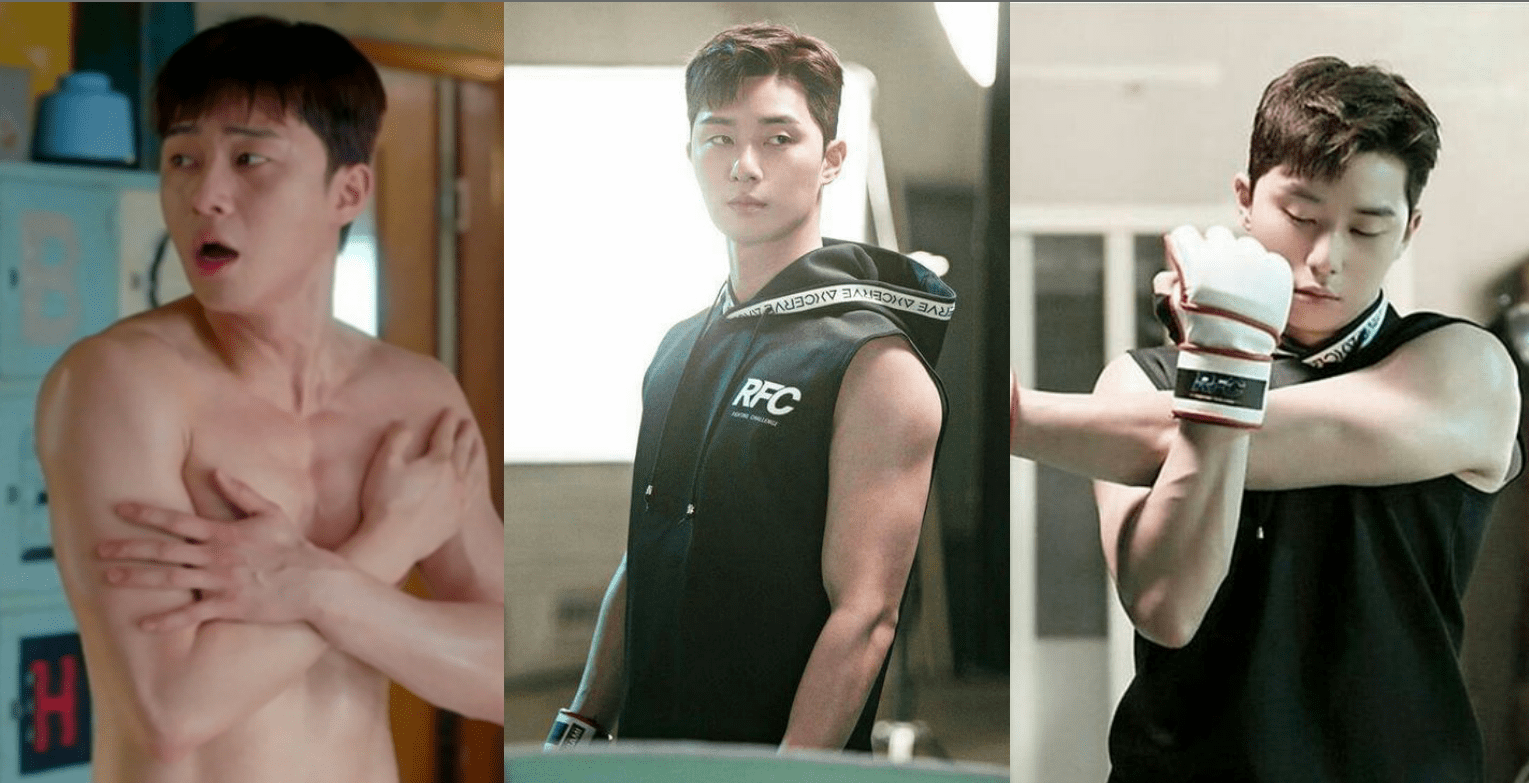 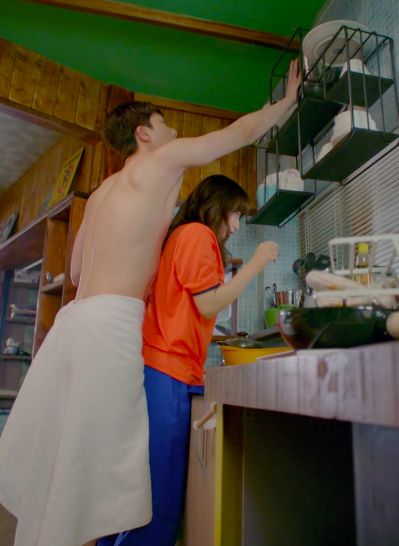 This is the stuff our day dreams are made of.

Jump on the heart-racing train and watch the first episode of “Fight My Way,” if you haven’t already:

As a model-turned-actor, Kim Woo Bin has pretty much always been buff. But beyond his physique, he can pull off a sexy character and a brooding, romantic type with his intense acting. Let’s hope and pray that he recovers fast from his illness so that we can see him again onscreen! 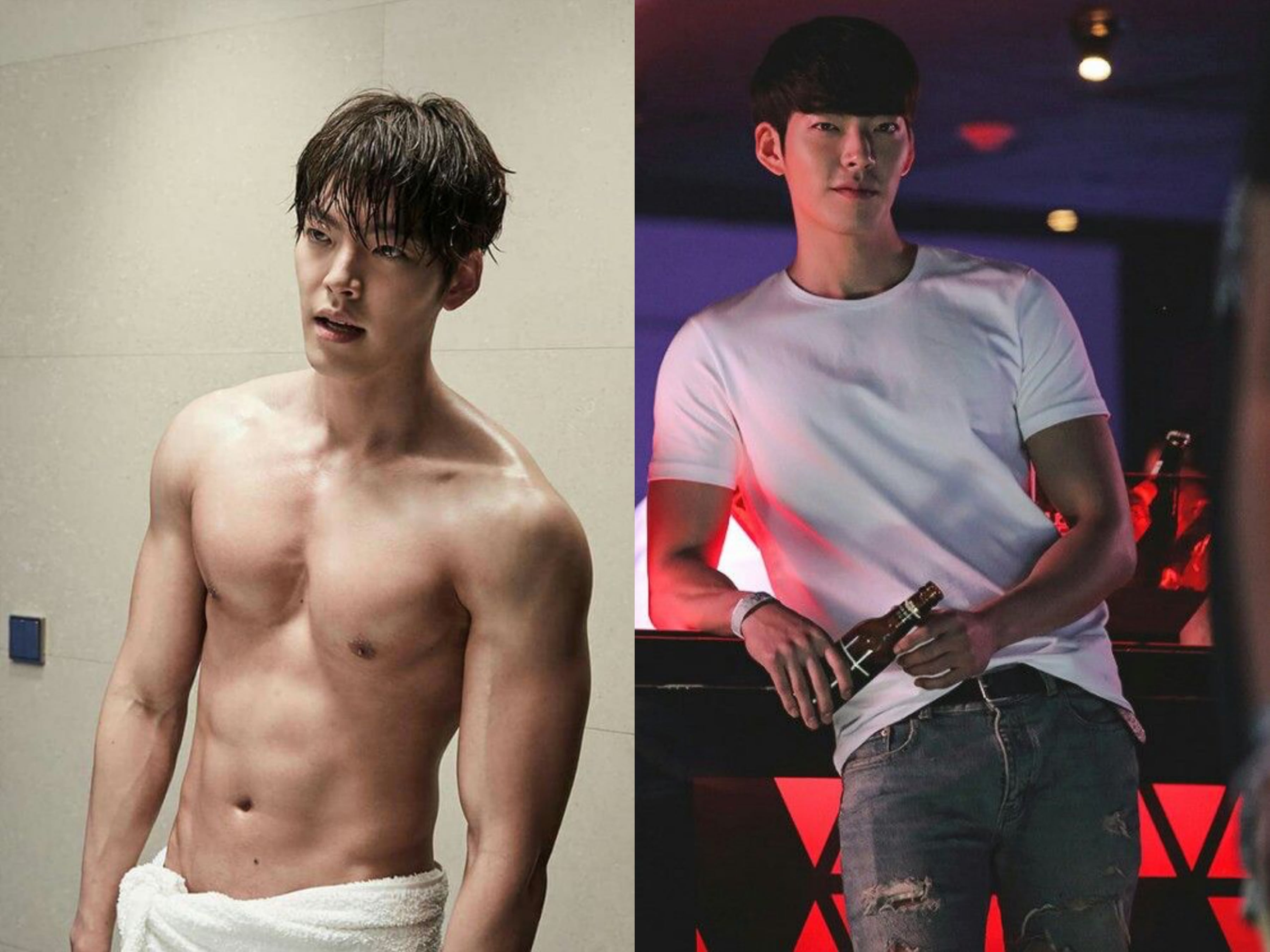 Catch Kim Woo Bin in the first episode of “Uncontrollably Fond” below:

Similar to Park Seo Joon whose role befits his bod, nobody can play a famous fitness trainer like the one and only So Ji Sub. In “Oh My Venus,” he showed what a veteran actor can do as he not only flexed his muscles (which he did quite a lot in the drama), but also showcased his irreplaceable eye-smile (the one that makes women go weak in the knees).

Catch So Ji Sub in the first episode of “Oh My Venus” below:

Sung Hoon is still pretty new as an actor, but he’s proving to be quite a contender as a strong male lead. He perfectly played an arrogant chaebol with a pure heart in “My Secret Romance” and we can’t wait to see what he will do next! 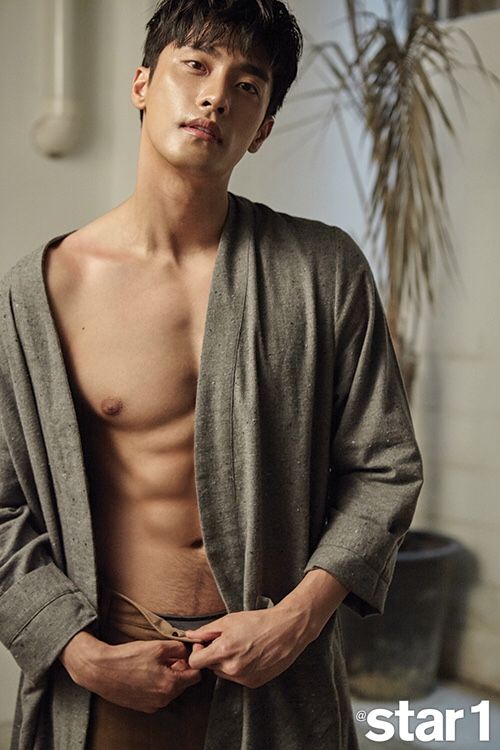 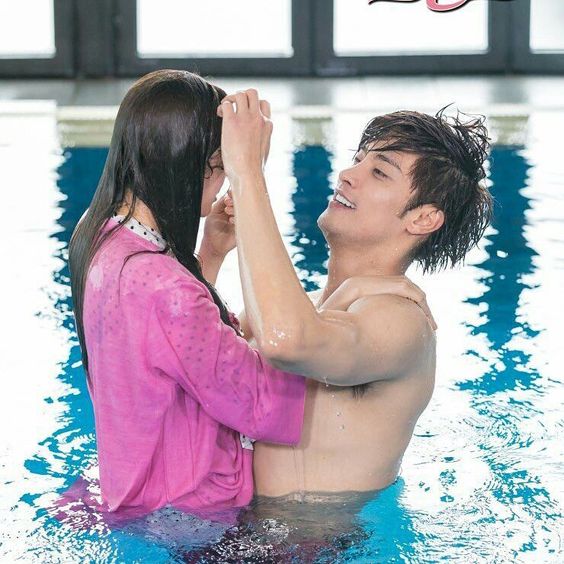 Another scene straight from our K-drama daydreams

Watch the trailer for “My Secret Romance” below:

The guy with the killer smile. He was all suited up in “Lookout,” but Kim Young Kwang is always known for his adorable little dimples and hard-rock shoulders. 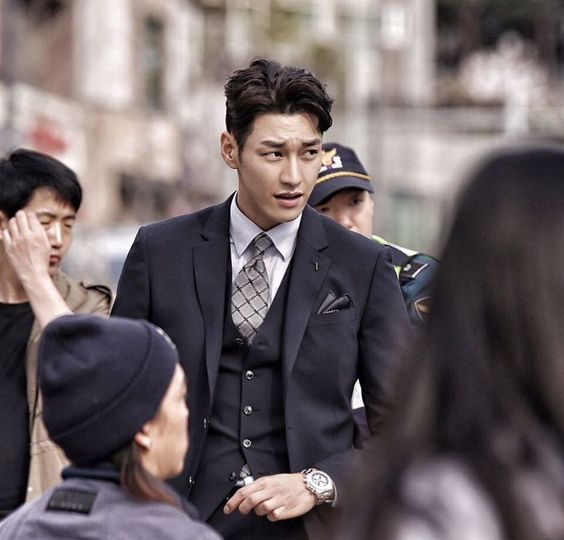 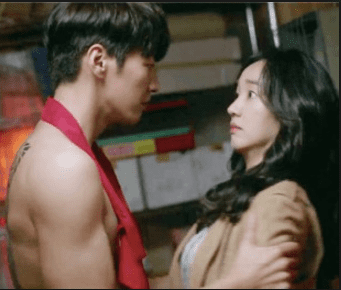 If Kim Young Kwang ever cornered us like this, we would probably have the same reaction as Soo Ae

Catch him in the first episode of “The Man Living in Our House” below:

From boys to men: pretty much everyone in “Scarlet Heart: Goryeo”

Whether they’re all covered up in traditional wear or showing off their bare shoulders, you can’t choose just one, can you? 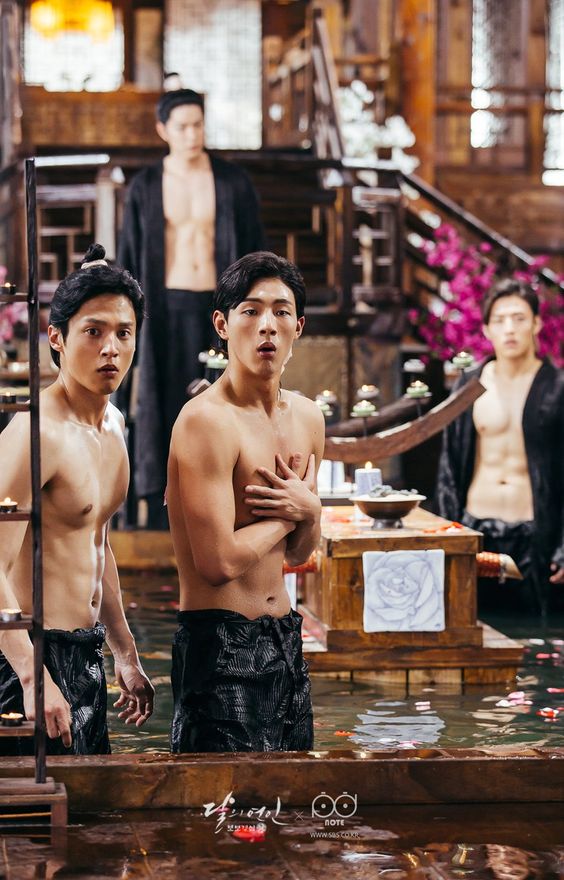 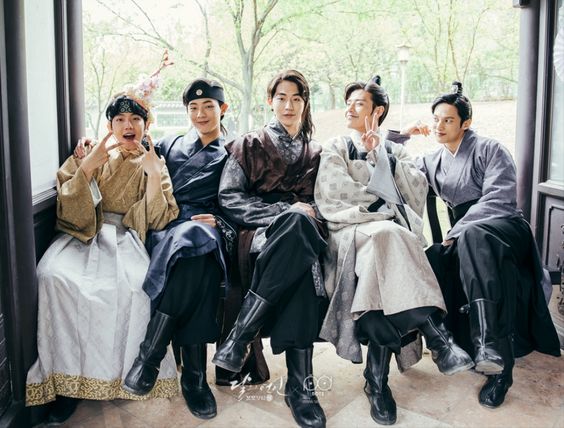 Catch the trailer of “Scarlet Heart: Goryeo” below:

Hey Soompiers, who is your favorite actor with beautiful, broad shoulders? Let us know in the comments below!