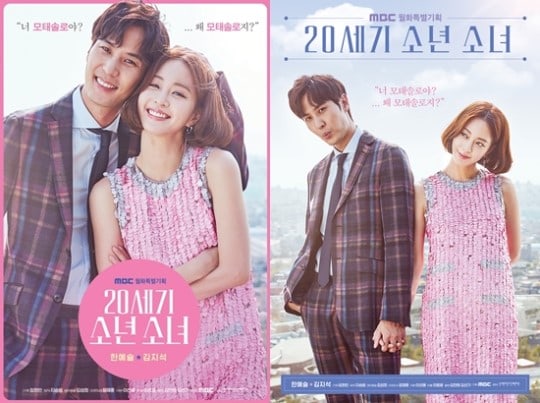 “20th Century Boy And Girl” is playing up the romance between Han Ye Seul and Kim Ji Suk!

Unlike most rom-coms, which tend to start off with the characters at odds, Han Ye Seul and Kim Ji Suk look lovey-dovey in pink-tinted couple posters, holding hands and holding each other close.

The production company for “20th Century Boy And Girl,” Huayi Brothers Korea, stated, “Every time we drop a poster or teacher, we feel the fans’ warm support and expectations for the drama. We aim to grab viewers’ hearts with a well-produced drama from the first episode.”

“20th Century Boy And Girl” is about three ordinary women in their thirties who have grown up together as they deal with love and friendship. The drama has been forced to halt filming and delay its premiere because of the strike at MBC.

It is now slated to premiere on October 9 at 10 p.m. KST, with the first four episodes airing in a row for a full 2 hours and 20 minutes.