Hyolyn talked about her new endeavors as a CEO and solo artist on tvN’s “Life Bar.”

On August 9, Hyolyn appeared as a guest on the talk show as a CEO.

Last November, Hyolyn set up her own agency bridgʒ after leaving Starship Entertainment. Hyolyn said, “I do have a business card, but it says ‘artist.'”

Super Junior’s Kim Heechul asked, “I heard that you’re working hard thinking about how you have to feed the mouths of your agency employees since you’re the CEO.” Hyolyn replied, “Usually, my personality is the type where even I got hurt or got stressed, I forget about it after I sleep and wake up. The members used to be envious of me, but I’ve changed now. I can’t sleep and feel like I shouldn’t rest. Even on days off, I’m constantly thinking, ‘How should I do the lyrics for this? How should I release this?’ My head is constantly working, so it doesn’t really feel like a day off. I can’t sleep well.”

About going on trips with her agency employees, Hyolyn explained, “I only ever performed on stage and never did management, so I had no knowledge. At the time, I didn’t know anything and told them, ‘Thank you for being with me. I love you.’ I told them we should go to the movies together and go out for food and drinks. People told me that I shouldn’t do that, so I’m trying to express [my gratitude] in a different way.”

Hyolyn then spoke about the differences between promoting as a solo artist and as a member of SISTAR. She said that she always thinks about the SISTAR members and that they probably know each other better than their best friends. She added, “Of the few good things [about being a solo artist], the biggest thing is being able to do music that I want to do.” 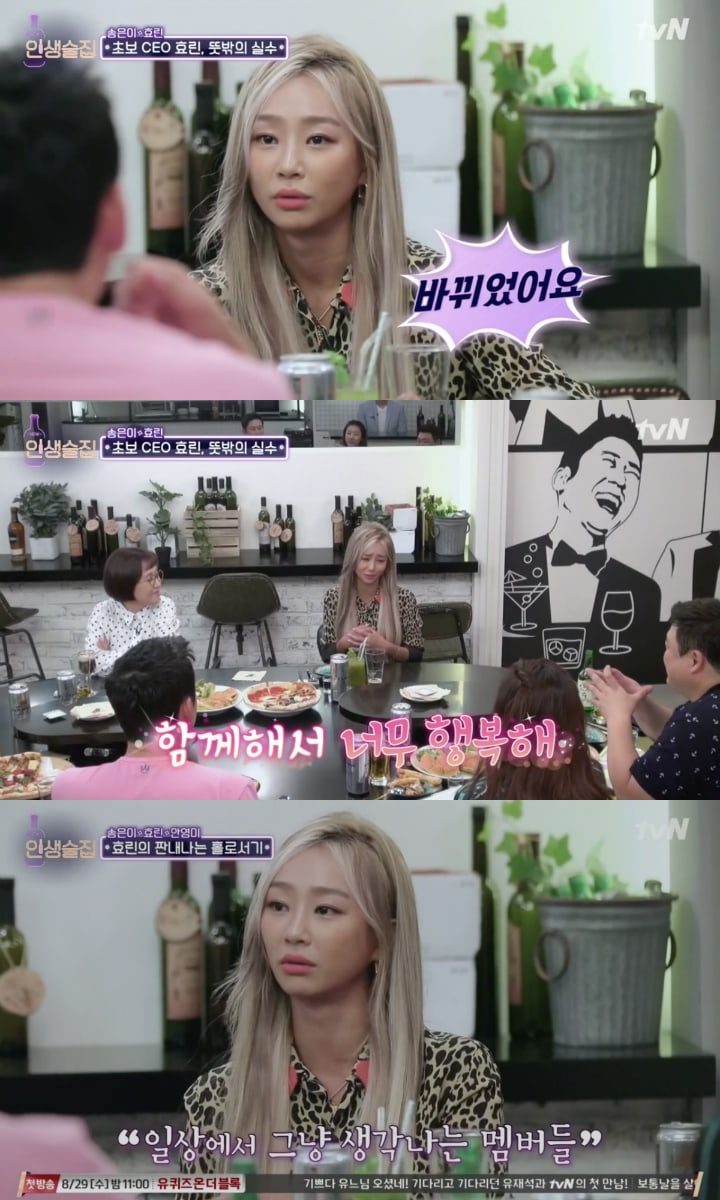 She also explained the arduous process behind filming the MV for “Dally.” Hyolyn began, “I’m doing it in a do-it-yourself way right now. For the MV filming, I did my own hair, makeup, and styling.”

On her efforts to work with choreographer Aliya Janell, Hyolyn said, “I watch a lot of foreign choreographers on social media on my phone. Out of all of them, there was one that I thought danced really well. I was working with Gray on the song at the time and I personally emailed and direct messaged her.”

She continued, “She said that it would be difficult because of scheduling conflicts, but I kept on trying. In the end, she said, ‘Okay. Let’s do it,’ so I went to L.A. I went to meet her and she said that it wasn’t going to work out. We were already there, but she said it was going to be difficult even after she moved her schedule around. So, I continued to ask her for a couple of days.

She added, “At the end, she said, ‘You came all the way here to see me and are doing all of this, so let’s do it together.’ I learned the choreography and filmed the MV there.”

After the cast and guests watched the MV for “Dally,” they praised her excellent dancing skills. Hyolyn admitted, “I was filming the ‘Dally’ MV and I suddenly just couldn’t do it. I really didn’t want to do it and got so mad at myself. I’m dancing with this choreographer, but still wanted to do better than her, but I was bad. There’s a certain anger at yourself when you want to do something well, but can’t.”

She concluded, “My employees came with me and suffered, and I wasn’t doing well so I also felt sorry to them. Because of these kinds of complicated thoughts, I said, ‘I don’t want to do it’ during the MV filming.”

Hyolyn recently released a preview of her upcoming single “Bae.”

Hyolyn
Life Bar
How does this article make you feel?