YouTube Reveals Korean Channels From 2018 With Highest Increase In Subscribers

YouTube has shared a ranking of the Korean channels that were rising stars in 2018!

As part of YouTube Rewind 2018, a top 10 list was shared of Korean channels created within the past year that had the highest increase in subscribers (including both Korean and international subscribers). Channels were included if they were made in the period from November 24, 2017 to November 23, 2018.

In first place is g.o.d member Park Joon Hyung’s web variety channel Wassup Man. His channel was created in May. Singer Holland, who made his debut in January and is the first openly gay K-pop idol, comes in No. 2 with his channel.

The No. 3 spot goes to the channel for Cube Entertainment girl group (G)I-DLE, who debuted in May. In fourth place is the channel of the webtoon “A Day Before Us.”

IZ*ONE’s channel comes in No. 5. The girl group is composed of the Korean and Japanese winners of Mnet’s “Produce 48,” and they debuted in October, after opening their YouTube channel in September.

Apink’s Bomi comes in No. 6 with her channel Bbom-Bbom-Bbom that she created in April. In seventh place is trot singer Hong Jin Young’s channel Ssamba Hong, which was launched in March.

The No. 8 spot is taken by the channel for Mommy Son, the masked rapper who appeared on “Show Me the Money 777” that has kept his identity a secret (although many fans believe he is Mad Clown).

Yoongi Kim, a Korean YouTuber who speaks in Russian in his videos, comes in ninth place with his channel. In No. 10 is actress Shin Se Kyung’s channel sjkuksee, which she began in September. 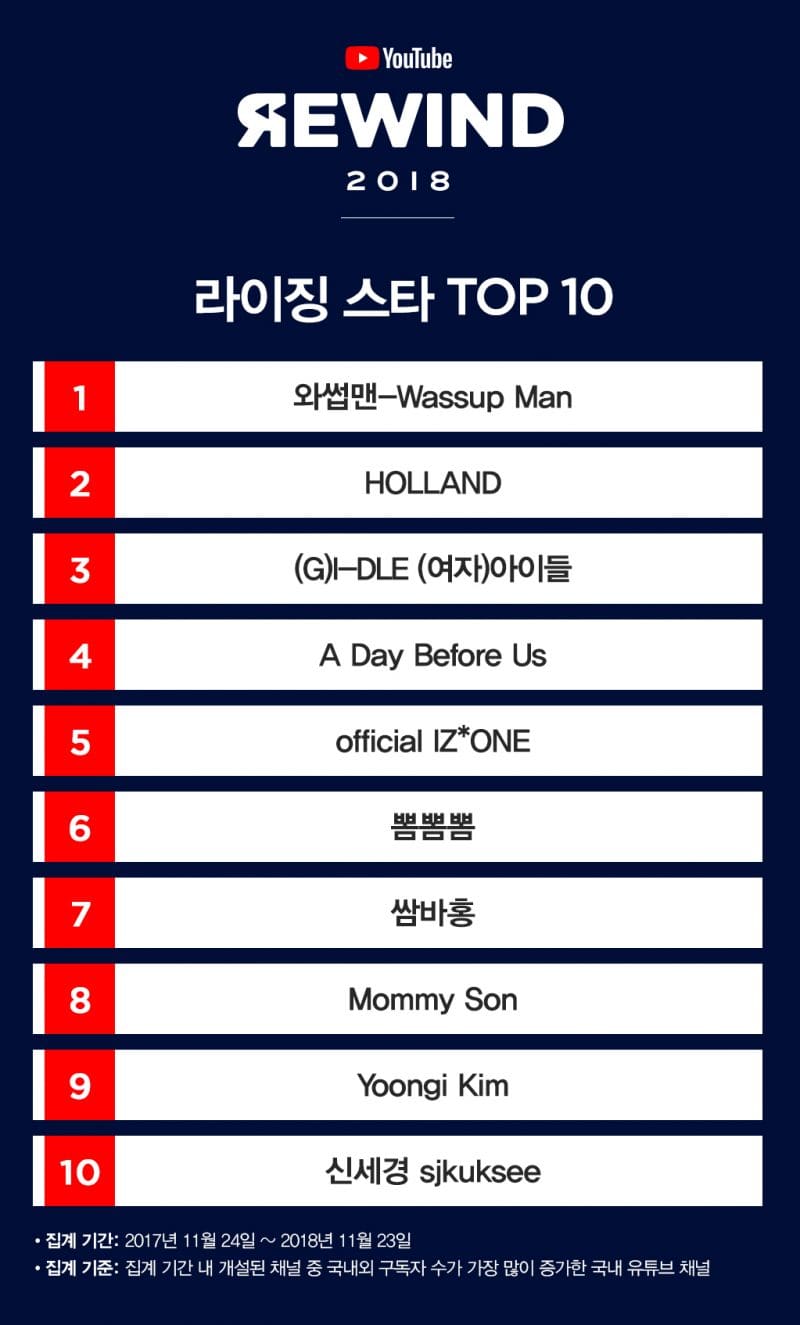 YouTube Rewind 2018 also recently revealed the most popular music videos within Korea from the past year, as well as the ranking for K-pop MVs based on views from around the world.