On December 24, Good Data corporation released a list of which dramas and actors had received the most public attention from December 17 to December 23.

The list is compiled through an analysis of 35 dramas in the areas of news articles, blog posts, community forums, social media, and video clip view counts.

JTBC’s “SKY Castle” ranked No. 1 again for the second consecutive week and increased its percentage of attention, from 14.73 percent last week to 17.96 percent this week. Moreover, its cast members also ranked among the buzzworthy actors of the week, from Yeom Jung Ah (No. 5), Lee Tae Ran (No. 7), and Kim Bo Ra (No. 8).

tvN’s “Memories of the Alhambra” showed steady growth for three weeks and this week overtook “Encounter” for the second spot. Hyun Bin and Park Shin Hye also took No. 3 and 6 respectively on the actors chart.

tvN’s “Encounter” fell to fourth place this week due to a competitive time slot, while SBS’s “The Last Empress” rose to third. “The Last Empress” showed impressive standings in the video clip view count category, with three clips from the drama gaining over 400,000 views. Some of that buzz, however, was due to the news this week that Shin Sung Rok sustained an injury on set and allegations of extreme working conditions.

Meanwhile, Park Bo Gum and Song Hye Kyo topped the list of buzzworthy actors again this week for the fourth week in a row. 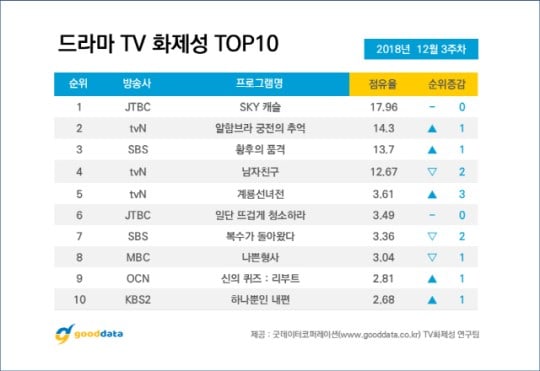 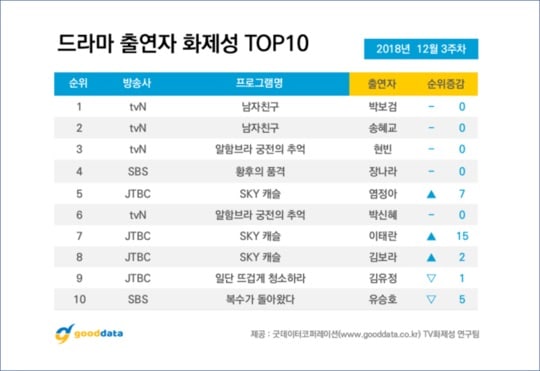 You can watch Park Bo Gum and Song Hye Kyo in “Encounter” below: