On January 21, Good Data Corporation released their weekly rankings of the most buzzworthy dramas and cast members.

The Good Data Corporation analyzed 34 dramas that aired between January 14 and January 20 in the areas of online articles, blog posts, community forums, social media, and views on video clips.

JTBC’s “SKY Castle” topped the most buzzworthy dramas list for the sixth consecutive week and recently overtook “Goblin” to be the highest-rated drama in cable network history. Several “SKY Castle” actors also made appearances on the most buzzworthy actors list, including Kim Hye Yoon (No. 8), Jung Joon Ho (No. 9), Kim Seo Hyung (No. 4), Kim Bo Ra (No. 5), and Yum Jung Ah (No. 6).

In second place on the buzzworthy dramas list was tvN’s “Memories of the Alhambra,” which aired its final episode on Sunday. Lead actor Hyun Bin also rose from No. 5 on the list last week to No. 3 this week.

Meanwhile, Park Bo Gum and Song Hye Kyo from tvN’s “Encounter” returned this week to the No. 1 and No. 2 rankings on the buzzworthy actors list, though they have consistently ranked in the top 10 since their drama’s premiere. “Encounter” ranked in fourth place on the dramas list, a spot that it has held on to for five consecutive weeks. 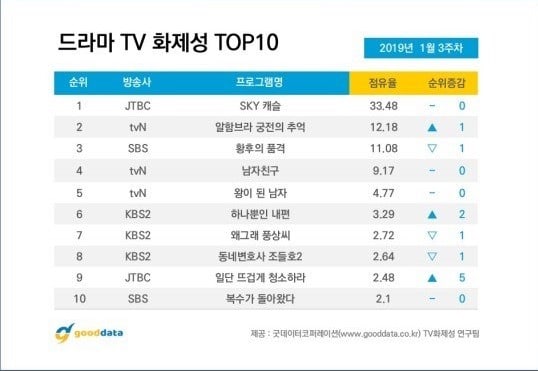 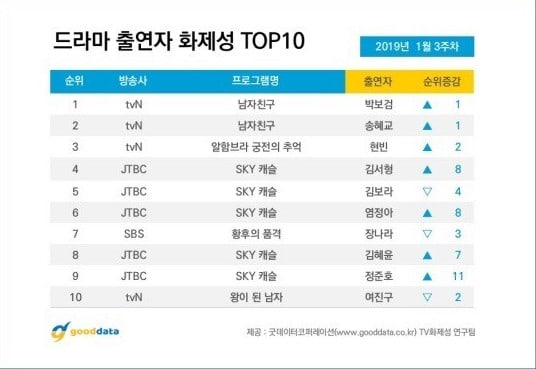 “SKY Castle” will air its final two episodes on January 25 and 26 at 11 p.m. KST and will soon be available on Viki.

You can watch Park Bo Gum in the latest episode of “Encounter” on Viki now: