Epik High began talking about their European tour, which begins on March 13 and will take place in London, Paris, Amsterdam, and more cities. When the radio DJ asked if they were popular overseas, Tablo responded, “It’s usually the locals that come [to our concerts]. We’re pretty popular.”

Mentioning their new group profile image that went viral in Korea, they explained that they took it at a neighborhood photo studio in accordance with DJ Tukutz’s desire to save money and time. They were happy with the results because the photo made them look scrupulous and reliable. 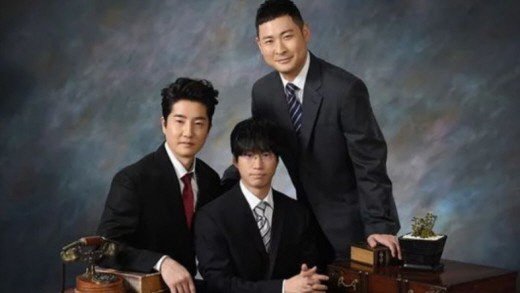 Moving on to the next topic, they introduced their upcoming album “sleepless in __________,” which will be released on March 11 at 6 p.m. KST. The album aims to comfort those who have problems sleeping for various reasons including nightmares, breakups, depression, and more. They collaborated with several artists including BTS’ Suga, Sunwoo Jung Ah, Crush, Code Kunst, and Younha.

BTS’ Suga, who took part in composing and arranging the song “Eternal Sunshine” from Epik High’s upcoming album, also previously featured in Lee Sora’s “Song Request,” which was written by Tablo. Regarding their previous collaboration, Tablo said, “He’s a nice guy with many talents. I thought it would be too predictable if I participated in the song I wrote. Then I thought of Suga and recommended him [to Lee Sora].” He continued, “I got Suga to work with us through a call with Bang Shi Hyuk sunbaenim. We had to give CEO Bang Shi Hyuk a call, and I thought DJ Tukutz would make a mistake if he did it, so I did it myself.”

Another highly-anticipated track from Epik High’s new album is “Love Drunk,” which features Crush in the song and IU and Jin Seo Yeon in the music video.

Are you excited for Epik High’s new release?

Epik High
BTS
Cultwo Show
Suga
How does this article make you feel?