Longguo (Kim Yong Guk) has shared a post on Instagram to apologize to fans and respond to claims regarding his controversy.

Last November, Longguo became a subject of controversy over several matters including the treatment of his cat Rcy, posts on a private Instagram account, claims that he made misogynistic comments, dating rumors, and more. At the time, he addressed some of the matters in a post to his fans.

Longguo made a comeback in August with a new mini album and the title track “Irresistable.”

On September 5 shortly before midnight KST, he posted again on Instagram with more details about the controversy and addressed further matters. Read his post below:

Firstly, thank you so much for supporting my new album a lot.

As I wrap up my short promotions, I want to speak to you about what I’ve been thinking about for a long time. Although it’s late, I think I shouldn’t do this any later.

In regards to the several issues that happened because of me, I thought that they were things that occurred because I am lacking and things that I need to handle myself. I am still reflecting upon myself. Although there were also parts then that were false, I’ve been quiet about it because talking about it further would make it seem as though it was just making excuses. However, because I’ve been quiet, some things that were false have become seen as true or were conveyed differently than my intended meaning. This meant that many people were hurt, and so after thinking about it for a long time, I’ve gathered the courage.

First, in regards to Rcy, I feel sorry towards Rcy and to everyone who I disappointed and made upset because of this issue. While living with several cats, I wasn’t able to wisely find a way to solve the issue of friction between them, and I ended up giving away Rcy. It was my mistake to think simply that both Rcy and the other cats would be happy. I wasn’t able to tell my fans, who cherished Rcy even more than I did, that Rcy wasn’t with me anymore, and this was because after worrying about when and how to say it, it ended up being too late to do so. This was also the wrong decision and I’m reflecting on it. After I gave away Rcy, I didn’t check on Rcy due to the excuse of being busy, and so I found out later that Rcy was ill. After this became known, I was told by the person who adopted and then lost Rcy that they would announce that it was their own issue. However, because I think that the biggest fault of all was my own for giving Rcy away, I did not reveal that person’s identity, and my thoughts on that have not changed.

About the posts on my private social media account as well, I first want to apologize to the fans who must have been hurt. After I debuted I was so happy while I was promoting, and I received so much love that it was to the degree that I was worried that that love might disappear. However, in comparison to before my debut, it’s also true that I was physically tired by my lifestyle that had become very busy with no rest. One thing I really wanted to say is that in regards to the things I give back to fans, I have never once felt disillusioned or wished that my promotions would end quickly. I was physically exhausted and because it was a private account, I so immaturely and impatiently wrote a short post. That post was conveyed in a way different than my own feelings and so I think many fans were disappointed and hurt by it, and my heart aches so much about that. Please know that I have always been so grateful, and I hope that you will not feel hurt.

The claims that I said misogynistic things in a gaming broadcast or that I called my fans ‘mothers-in-law’ are not true. Many of my fans already know my gaming ID, but because my fans knew it I didn’t want to change it and kept using it, and I’ve been even more careful because I worried that I might possibly use coarse language without meaning to while gaming. Above all, I saw the video and the post claiming that the person in the video who was saying misogynistic things was me, but the ID was not mine and it’s in reality not me. Also ‘mother-in-law’ is such an unfamiliar word to me, and I have never once thought of my fans as my mothers-in-law.

I saw a post that said that my mother had come to a concert and I had pretended not to know her and turned her away. In reality, I have never met with my mother once after my debut. My mother is sad about this as well, and I of course am sad that I cannot show my mother my performances personally. My mother, who has not been able to come visit me after my debut, saw the false post and was also very upset. It also made my heart ache to see her trying to explain on my behalf. Although I cannot prove to all of you that my mother has not been able to come to Korea since my debut to see me, I inform you that the post is not true.

As I am lacking in many ways and made many mistakes, I thought that rather than talking about it a lot, I needed to sincerely take time to self-reflect, and I still think the same way. I’ve spent a long time on this post too, and have kept writing and erasing it several times. I was intending to gather up the courage and write it before my album was released, but I thought it might be seen as me trying to avoid the situation before my album came out, so I wanted to first show you the image of myself putting in effort as I worked hard at singing and promoting. I know that it’s so late to be saying these things now, but I gained courage while seeing the people who even now still support me even though I am lacking. Also when I see the posts written by people who still feel hurt because of me, I want to tell the people who gave me so much love that I didn’t really mean that and that I hope they won’t feel hurt anymore and that they still think of those memories that used to be good as good things.

My Korean is not good. Because I’ve been worried that my meaning would be conveyed once again differently than my intentions because of my poor wording, I wrote this post while writing, erasing, and fixing it for a long time. I also completed this after receiving the help of people around me through having conversations about it.

I once again say that I am sorry to my fans who were hurt because of me and to the people who were angered and felt disappointed because of my lacking awareness about my pet. Also, I am very sorry to Rcy, who experienced unwarranted pain because of my irresponsibility. I won’t forget it, I will reflect, and I will try to show you a matured version of myself. Thank you for reading my long post. 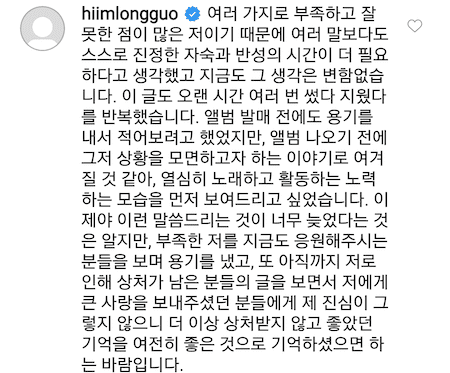 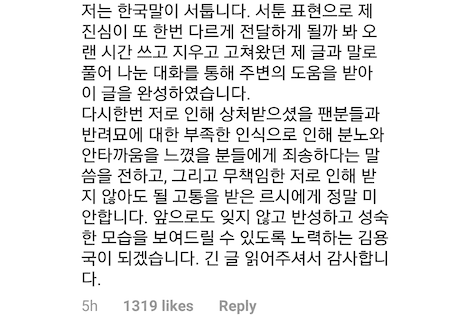 XPN
Longguo (Kim Yong Guk)
How does this article make you feel?