SEVENTEEN’s third studio album “An Ode,” which previously debuted at No. 1 on Gaon’s weekly album chart, topped the monthly physical album chart for September. TWICE’s “Feel Special” came in at No. 2, followed by X1’s “Quantum Leap” at No. 3, The Boyz’s “DreamLike” at No. 4, and DreamCatcher’s “Raid of Dream” at No. 5. 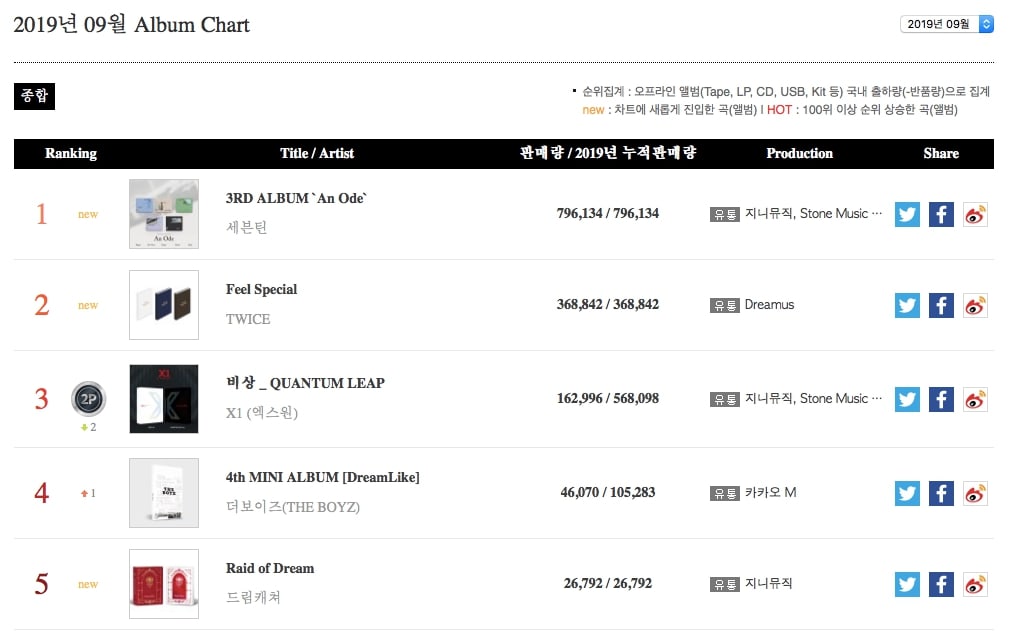 Paul Kim’s “So Long” (from the OST of tvN’s “Hotel Del Luna“) rose to No. 1 on this month’s overall digital chart, with BOL4’s “Workaholic” trailing at No. 2. Jang Beom June’s “Your Shampoo Scent in the Flowers” (from the OST of JTBC’s “Melo is My Nature“) charted at No. 3, with Maktub’s “To You My Light” and Gummy’s “Remember Me” (also from the “Hotel Del Luna” OST) rounding out the top five at No. 4 and No. 5 respectively. 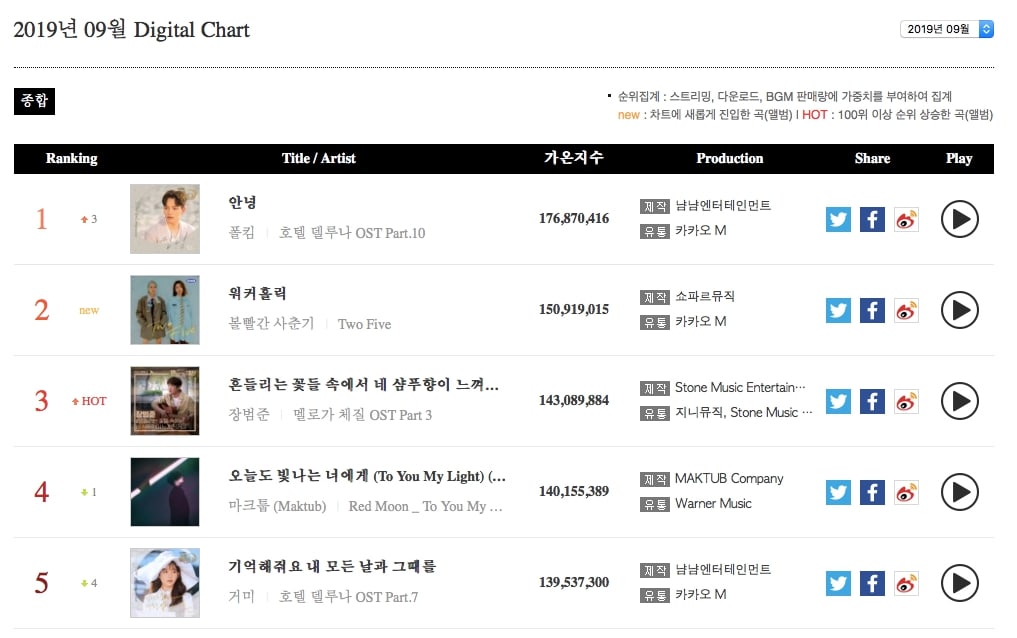 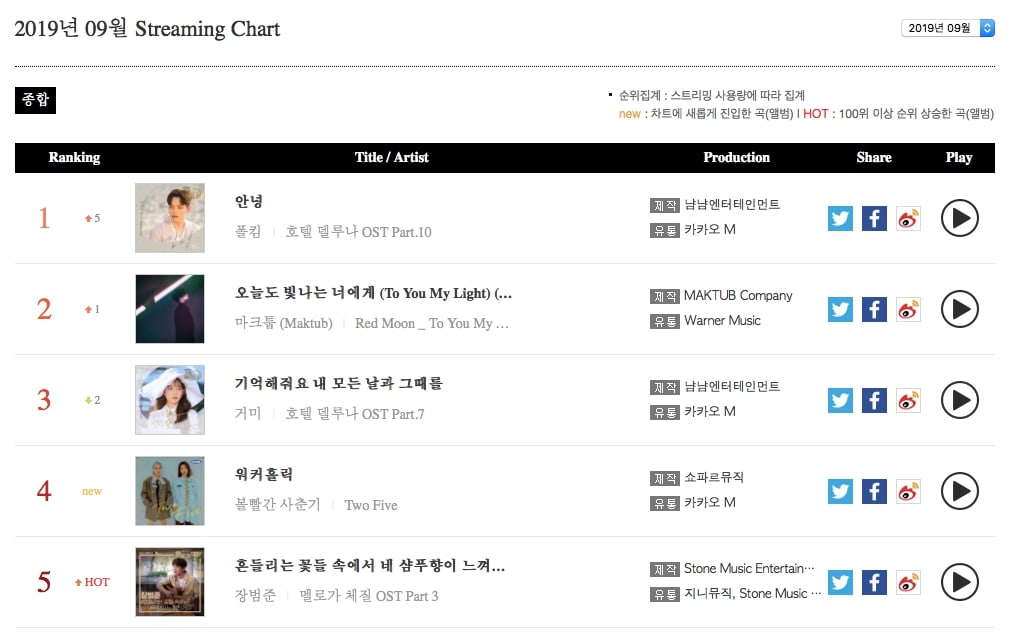 BOL4’s “Workaholic” topped the digital download chart for September, while Jang Beom June’s “Your Shampoo Scent in the Flowers” shot up to No. 2 for the month. AKMU’s “How Can I Love the Heartbreak, You’re the One I Love” charted at No. 3, MAMAMOO’s Wheein’s solo track “Good Bye” at No. 4, and Kassy’s “Story of a Night Fall” at No. 5. 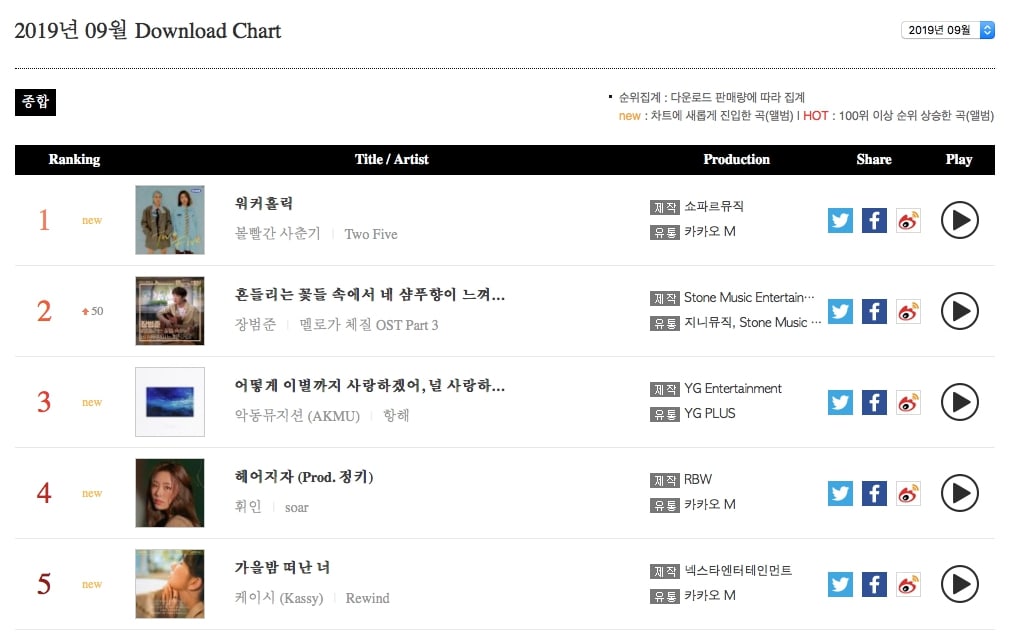 BTS topped Gaon’s newly revamped monthly social chart for the third consecutive month, with Kim Jae Hwan rising to No. 2 for September. Trot singer Song Ga In came in at No. 3, followed by X1 at No. 4 and TWICE at No. 5. 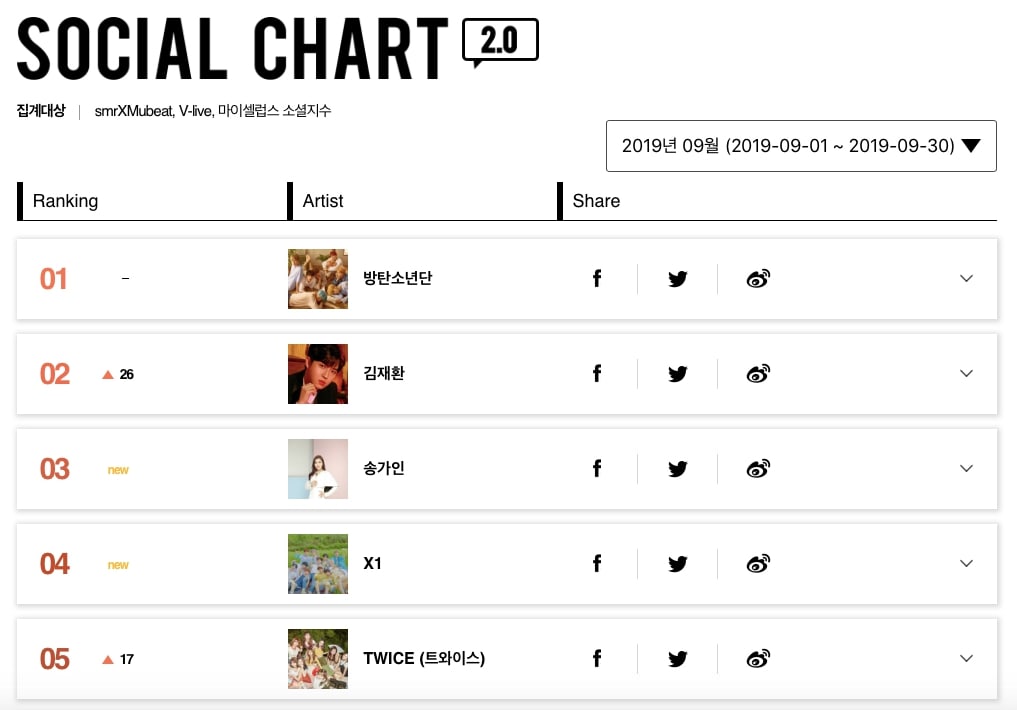 EXO’s Chen’s new solo mini album “Dear My Dear” debuted at No. 1 on the physical album chart for the week of September 29 to October 5. SEVENTEEN’s “An Ode” successfully maintained its position at No. 2 on the chart, while TWICE’s “Feel Special” stayed strong at No. 3. Finally, ONEUS’s “FLY WITH US” and Jeong Sewoon‘s “DAY” debuted at No. 4 and No. 5 respectively. 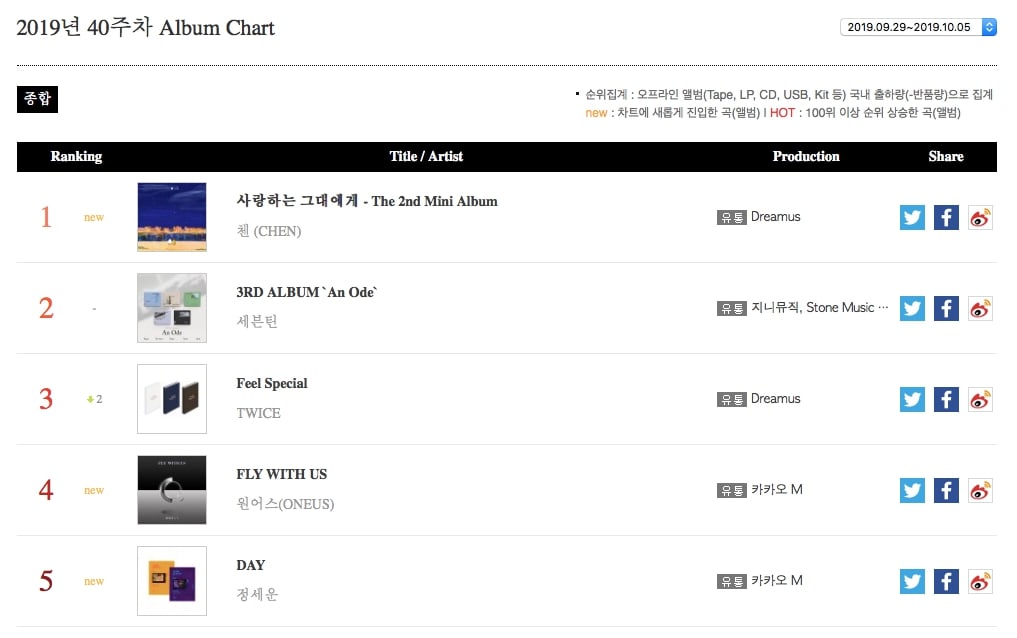 AKMU achieved a triple crown after sweeping all three digital charts this week: the duo’s new title track “How Can I Love the Heartbreak, You’re the One I Love” claimed No. 1 on the overall digital chart, the streaming chart, and the download chart.

The top five songs for this week were also exactly the same on the overall digital chart and the streaming chart. AKMU’s “How Can I Love the Heartbreak, You’re the One I Love” topped both charts, followed by Jang Beom June’s “Your Shampoo Scent in the Flowers” at No. 2, BOL4’s “Workaholic” at No. 3, Lim Jae Hyun’s “I’m a Little Drunk” at No. 4, and Paul Kim’s “So Long” at No. 5. 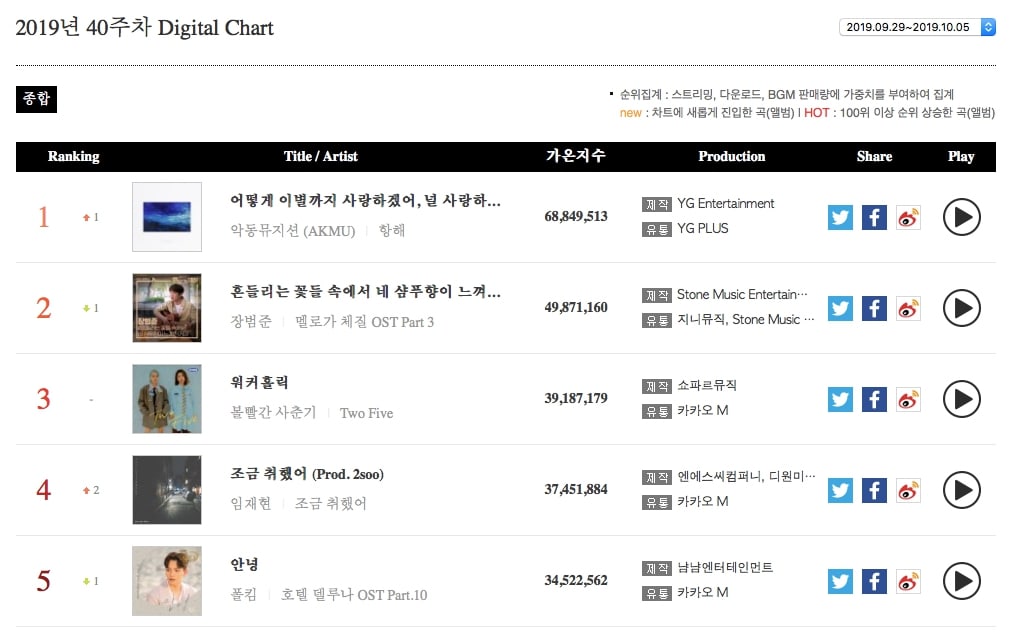 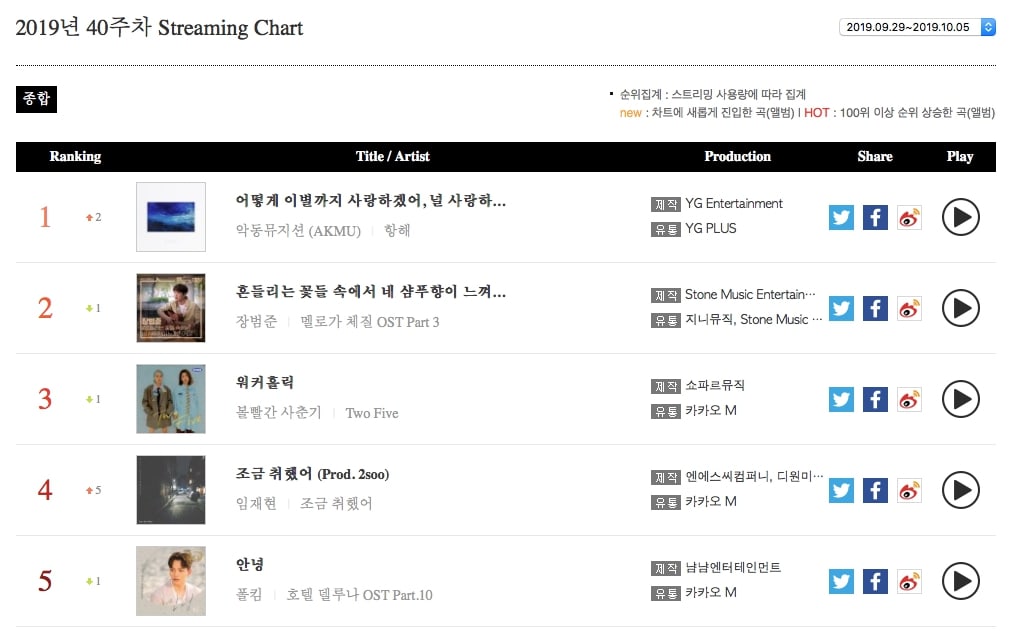 AKMU’s “How Can I Love the Heartbreak, You’re the One I Love” came in at No. 1 on this week’s digital download chart, while Chen’s new title track “Shall we?” debuted at No. 2. Jang Beom June’s “Your Shampoo Scent in the Flowers” held onto its spot at No. 3, followed by TWICE’s “Feel Special” at No. 4 and Block B’s Zico’s “Daredevil” at No. 5. 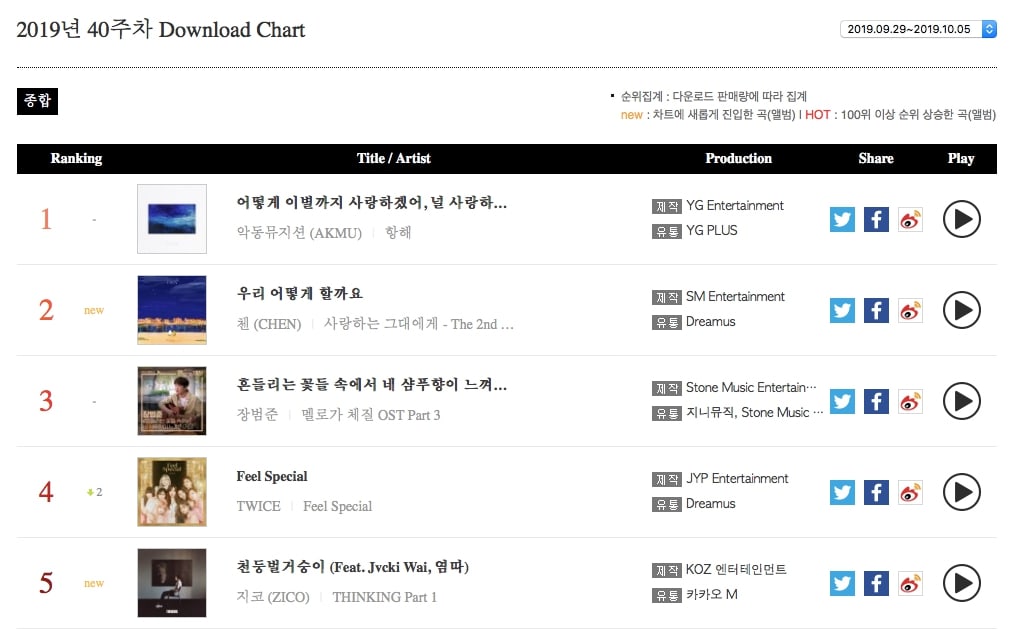 In addition to topping the monthly social chart, BTS stayed No. 1 on the weekly social chart for the 14th consecutive week. TWICE and AKMU both maintained their positions at No. 2 and No. 3 respectively, while band Hoppipolla entered the chart at No. 4. Finally, SEVENTEEN rounded out the top five for the week. 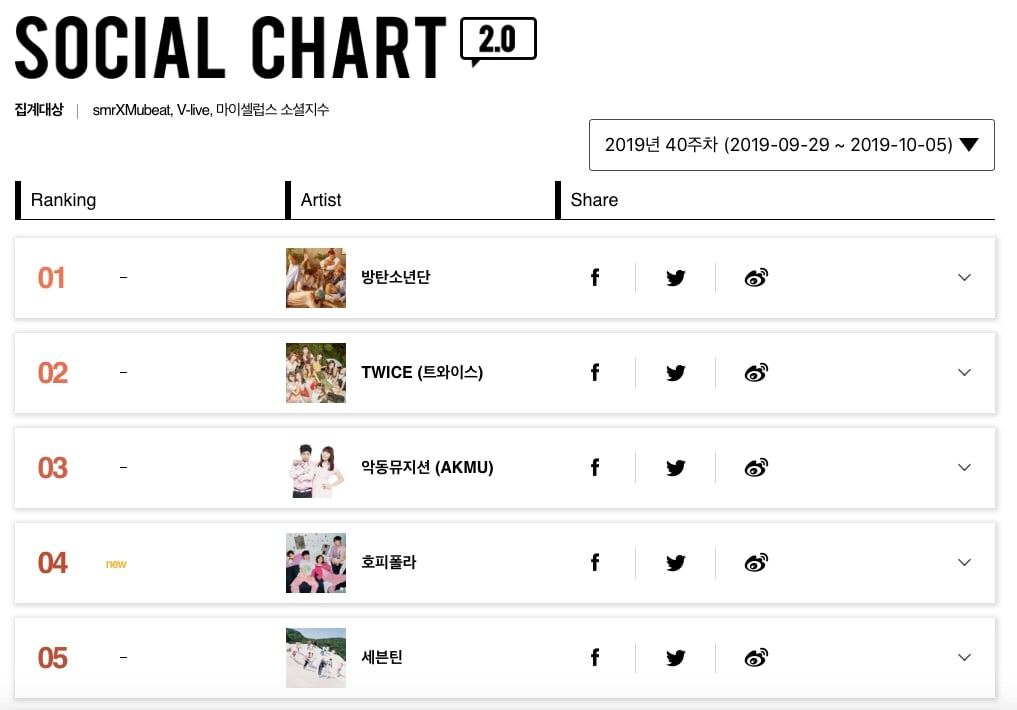 If you haven’t already seen it (or even if you have!), you can watch “Hotel Del Luna” with English subtitles below: