On April 7, BTOB’s Eunkwang held a live broadcast on YouTube to celebrate his return from mandatory military service.

He greeted fans by saying, “I think I’m going to tear up. I am BTOB’s leader, Seo Eunkwang, who has returned as a civilian today. Everyone, it’s good to see you. Have you been doing well?” 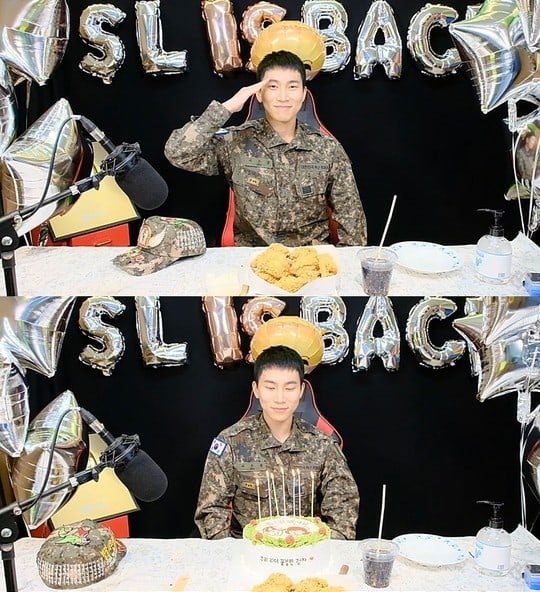 He began the broadcast in his military uniform and said, “I was discharged healthily without any injuries. I ate three square meals a day and slept early and woke up early and exercised a lot. I gained about 5-6 kg (11-13 lbs). I worked out a lot, so I think the weight was distributed nicely in my muscles.”

Staff members at Cube Entertainment had prepared a cake for his discharge ceremony. Eunkwang thanked fans for tuning in to his live broadcast and said, “Now that I’ve been discharged and I’m 31 years old, I feel like I’m starting a second stage in my life. I think that people who went to the military late will relate to this feeling. Because I’m older, I really feel like I’ve been reborn. What I want to say is, I want to spend this second stage of my life with everyone.” 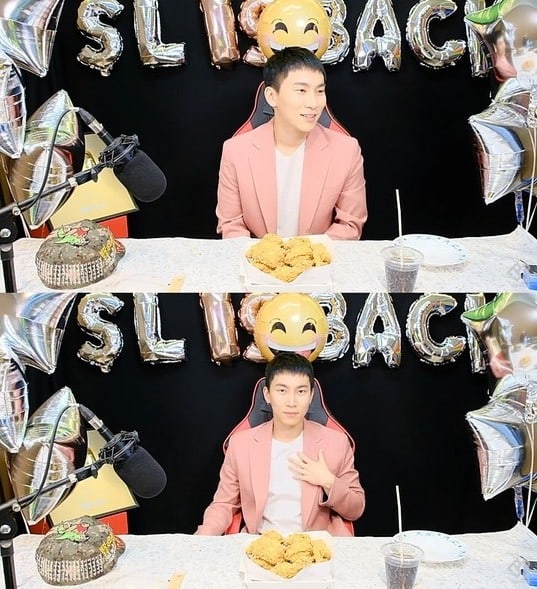 He then changed into a pink suit and was given a plate of fried chicken. He said, “I was asked what I wanted to eat during this live broadcast. I am working out a lot these days. I did aerobic exercise yesterday, so I asked them to prepare chicken. Chicken has a lot of protein, so I have to eat it to prevent muscle loss.”

Eunkwang shared stories from the military, including updates on Highlight’s Yoon Doojoon (the two used to be Cube labelmates) and B1A4’s CNU. Eunkwang said, “After enlisting, I lived for over a month at the training facility [with Yoon Doojoon.] I was already on friendly terms with him, so I was happy. Personally, I felt like I could depend on him a lot. He’s older than me and also the leader of his group, so I could really depend on him. When I was in training, everyone got along and the atmosphere was really good. The friends I made there wanted to come to my discharge ceremony today. I wanted to complete the rest of my service with Doojoon, but we were assigned to different units. Regrettably, we were assigned to units that meant we couldn’t see each other after that first month and a half.”

He added, “I am grateful for the online messages that people sent me. The army had to divide the letters into three categories: one for me, one for Doojoon, and one for ordinary soldiers. I’m grateful for the show of support, but it must have been hard for the assistant instructors.”

Eunkwang added that he had met Melodies (BTOB’s fandom name) in the army as well! “There were Melodies in the army,” he said. “There were about four or five. I was happy to be comrades-in-arms with Melodies. Of course, I was proud. I am proud of your very existence, I am proud of the fact that we can do this together.”

When asked if he was now reinstated as BTOB’s leader, he replied, “Of course I’m the leader. I am forever the leader.” Just before Eunkwang’s enlistment, the leader mantle was passed to Minhyuk. After Minhyuk went to the military, Yook Sungjae (the youngest member) became the leader instead.

“The current leader is Sungjae, and he did a good job,” Eunkwang said. “I heard that he was really happy to become the leader, but Sungjae is a really good person. He worked hard for two years. Now I’ll take over again.”

Eunkwang began his mandatory military service in August 2018 as an active duty soldier and served in the special forces after being assigned to Special Warfare Command. Minhyuk and Changsub are still doing their service and are scheduled to be discharged later this year.