EXID’s Hani recently sat down for a fun interview with YouTuber LILKA where she talked about life as an idol!

Hani explained that she had a lot of questions when she was preparing to play the role of a gaming broadcaster. She’d found LILKA and contacted her out of the blue, and they’d met up to chat about the world of YouTubers. Hani is starring in the upcoming sci-fi short film “White Crow” (literal title), in which she plays a broadcast host who becomes stuck in a virtual reality game during a live show.

In the interview, LILKA asked Hani questions from commenters. One of them was if Hani watches her own fancams or videos edited by fans. “I watch them a lot, of course!” Hani said with a laugh. “Honestly, how could I not watch them? I’m curious to see if I did a good job or not.” 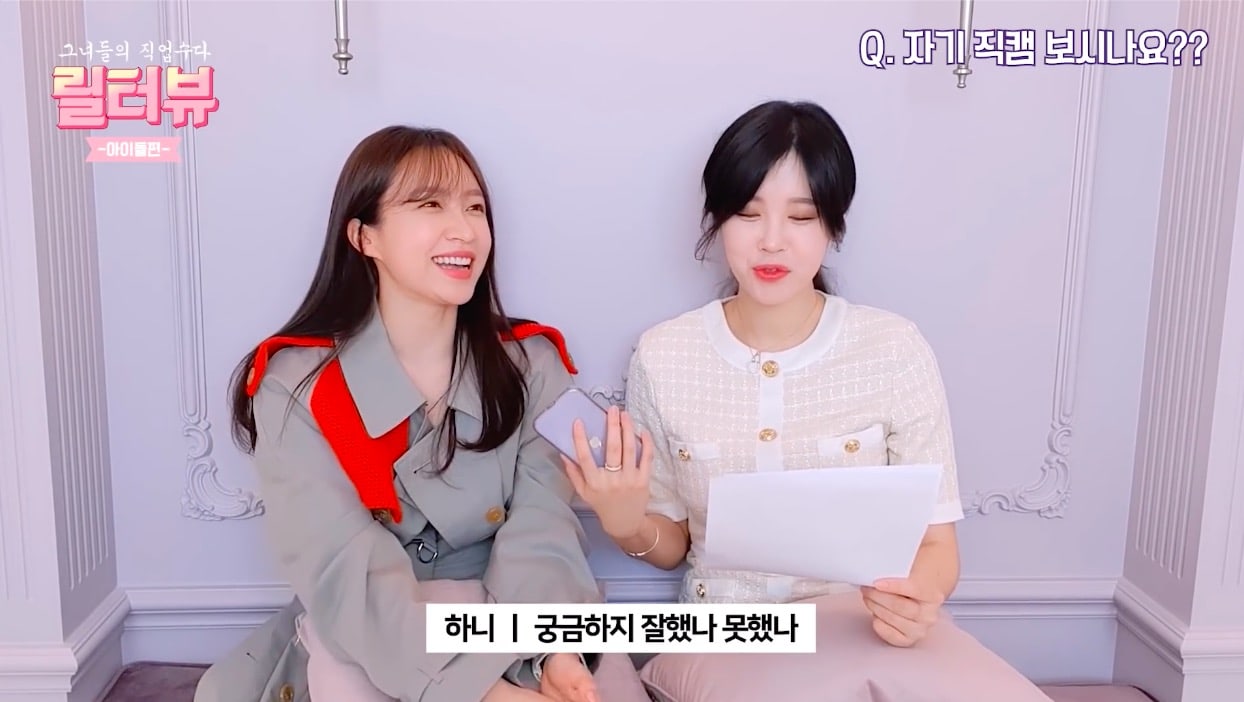 A commenter asked what the most rewarding day was in her life as an idol. “We once rose on the charts and then came in first on a music show for the first time,” said Hani, referring to the group’s song “Up & Down” becoming a sudden hit.

“When the winner was announced, we had always been standing in the back,” said Hani. “I couldn’t even believe that we’d won that trophy, but even more so than that, our company staff were so happy. It was really rewarding.”

LILKA commented on how their sudden success had been due to a fancam of Hani performing “Up & Down” that went viral, and she asked about the person who took the video. Hani said, “I wanted to do something to repay that person so I wanted to at least eat a meal with them. I hoped I’d have that chance to express my gratitude.” She laughed and said, “But I was rejected.”

“However, we met at another event,” she said. “They were filming me again! So I looked at them and mouthed the words, ‘Thank you.’ They filmed that too and uploaded it. It was pharkil. Thank you, pharkil!”

LILKA encouraged her to send a video message to them, so Hani turned to the camera and said with a laugh, “pharkil, it’s thanks to you that I’m here like this now. Thank you so much. You really saved a few people.”

The next question was from someone who asked, “When you’re releasing a new album and learning new choreography, do you forget the choreography for your older songs?” Hani laughed and said, “Of course!”

When asked how long it takes to learn a new dance, Hani said five days. LILKA asked how long it took when she was in her first year as an idol, and Hani said, “A few months. For ‘Up & Down,’ we practiced for over three months.” She shared that the dance team told them they’d learned it so well they could even enter a contest and jokingly told them, “Stop coming here!”

To a question about whether idols’ outfits reflect their own tastes or if the stylists make all the decisions, Hani said that’s different for everyone. “My fellow member did producing so our opinions tended to be included a lot,” said Hani. LILKA then asked her to name which of their songs Hani liked the most when it came to their outfits or the song’s concept.

Hani named “Every Night” as the track she liked the most as a song. She added, “The song that I liked the most overall — although it’s a bit of a shame because we promoted it as four members — was ‘Night Rather than Day.’ Our clothes were really comfortable, we’d wear big jackets, we’d just fly around on stage because we were comfortable!” 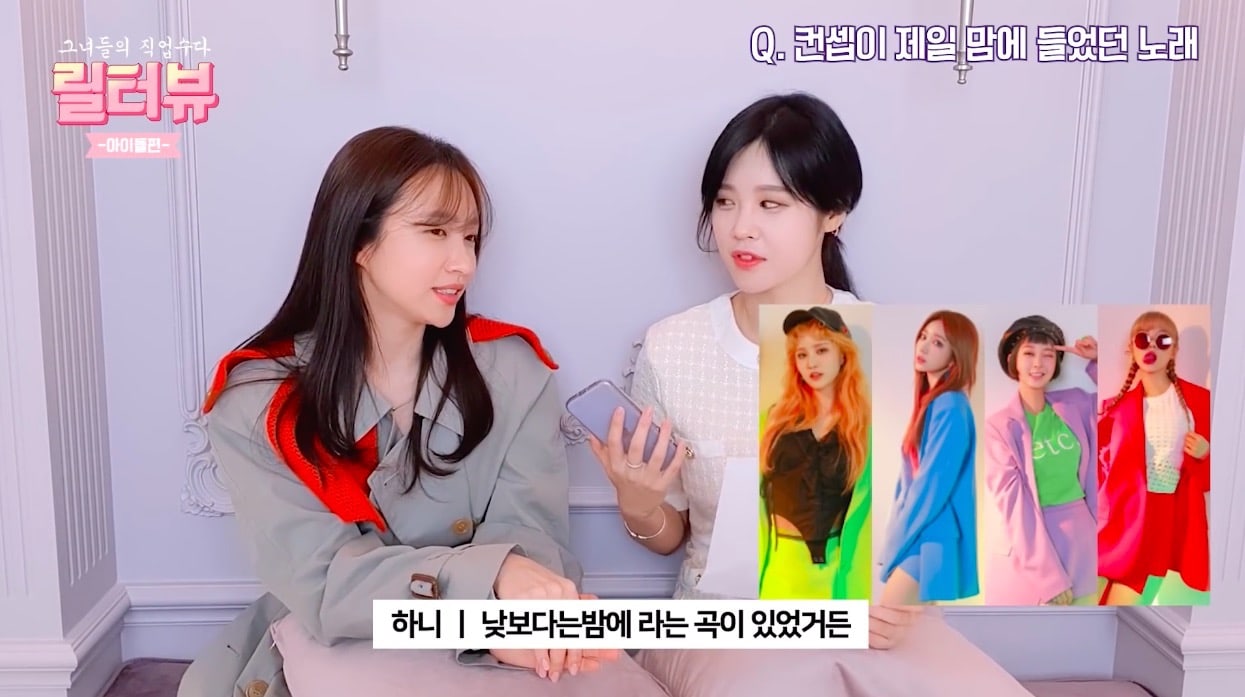 When asked “If you were born again, would you still want to be an idol?” Hani replied, “I’m not sure about being an idol, but I want to be EXID’s Hani.”

Someone posted a question asking how Hani deals with malicious comments. “I don’t want to look at malicious comments but I often end up looking at them, like anyone would,” said Hani. “It used to be that if you were reading an article and you scrolled down just a bit, you could see them!”

“But lately they’re gone!” she said with a big smile. “They’ve made it so people can’t comment!” She turned to the camera to say, “Thank you so much!”

Following recent concerns over how malicious comments affect the mental health of celebrities, the portals Daum and Naver do not currently allow comments to be made on articles about entertainment news.

She went on to say, “The thing that I worry about isn’t me — my mom and dad see them too. I get upset thinking that they’re going to be hurt if they see those. I don’t know what those people are thinking when they post those kinds of comments! They’re really terrible people!” 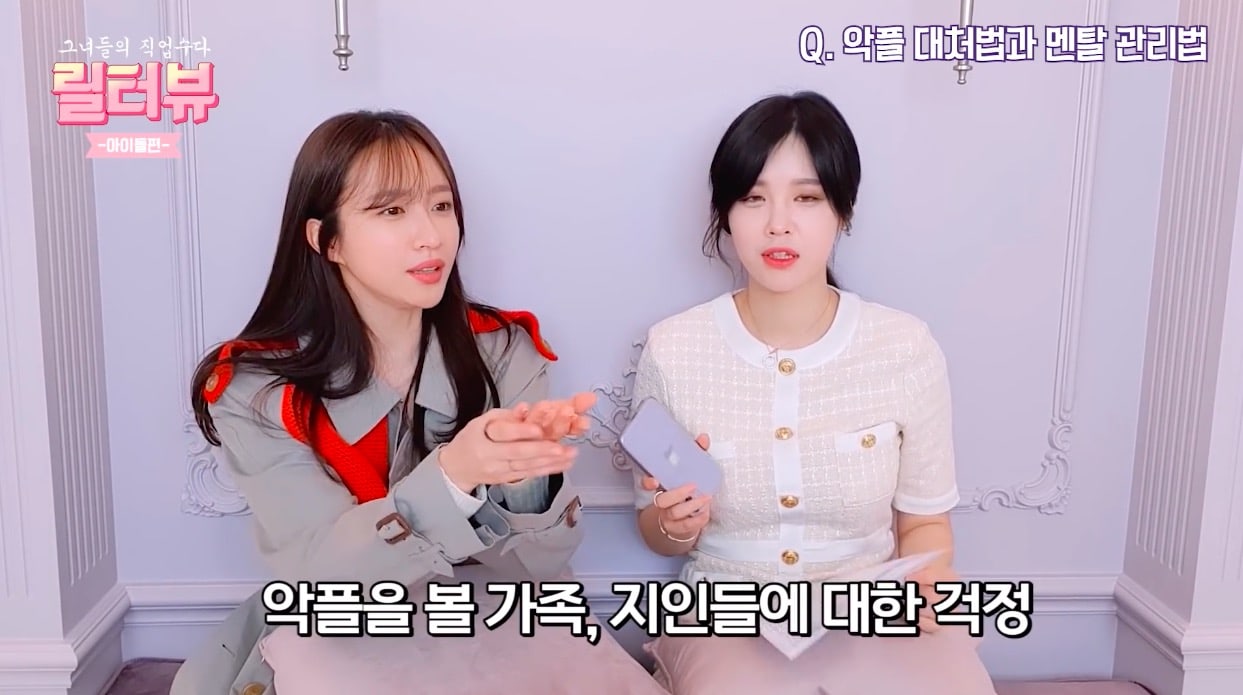 A commenter also asked to describe what it feels like to be famous and have people recognize her and more. Hani said that of course it feels good and it makes her family members feel proud. “But on the other hand, it’s a burden,” she said. “My words have power and influence. I have to use that power for the right things, so I have to figure out what the right things are. I think it makes me very cautious.”

When someone requested that she say something to people who want to be idols, Hani said, “Of course your dream and your future are important, but don’t forget that your current life is also important.”

She added, “It’s very dangerous to entirely give others the job of judging whether or not you have value. I think you have to remember that more so than just being a good singer or a good idol, there’s value in being a good daughter, a good son, a good brother or sister, a good colleague, a good friend, and a good person. Good luck, I’m trying to do that too.”

Watch the interview below!

Watch Hani in the drama “XX” below!