NU’EST has taken over this week’s Gaon charts!

For the week of May 10 to May 16, NU’EST’s eighth mini album “The Nocturne” took the No. 1 spot on the album chart, while their title track “I’m in Trouble” topped the download chart and BGM chart (which tracks the songs that people purchase to use as background music for their blogs and KakaoTalk profiles). In total, NU’EST has topped three charts, achieving a triple crown.

IU’s “eight” (produced by and featuring BTS’s Suga) placed No. 1 on the overall digital chart and streaming chart for a double crown.

Check out this week’s top five for each of the charts below: 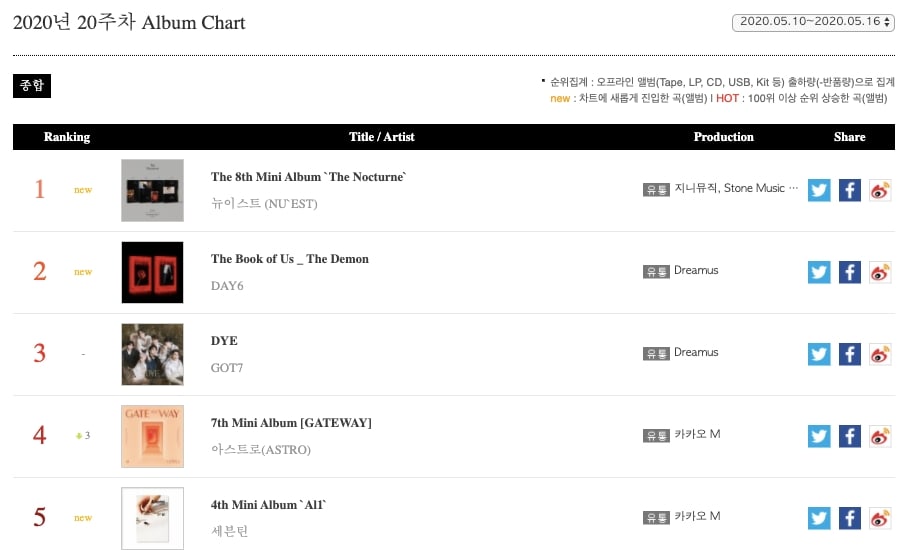 NU’EST’s “I’m in Trouble” tops the digital download chart and is followed by IU’s “eight” and BOL4’s “Leo.” New releases DAY6’s “Zombie” and Raiden and EXO member Chanyeol’s “Yours” (featuring Lee Hi and Changmo) take No. 4 and No. 5 respectively. 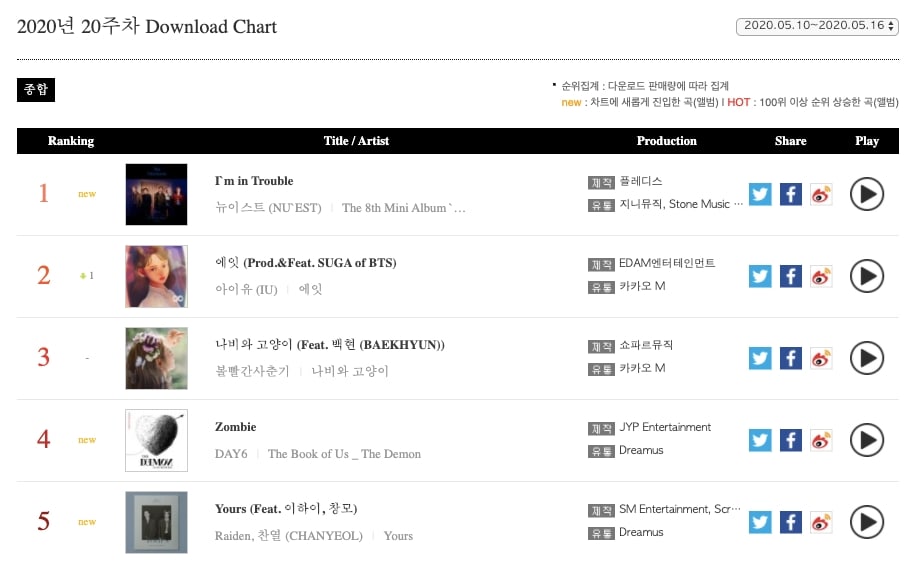 IU’s “eight” takes No. 1 on the overall digital chart for the second week in a row. BOL4’s “Leo” has jumped up to No. 2, while Jo Jung Suk’s “Aloha” (OST for “Hospital Playlist”), Oh My Girl’s “Nonstop,” and Girls’ Generation’s Taeyeon’s “Happy” fall one step each to rank from third to fifth. 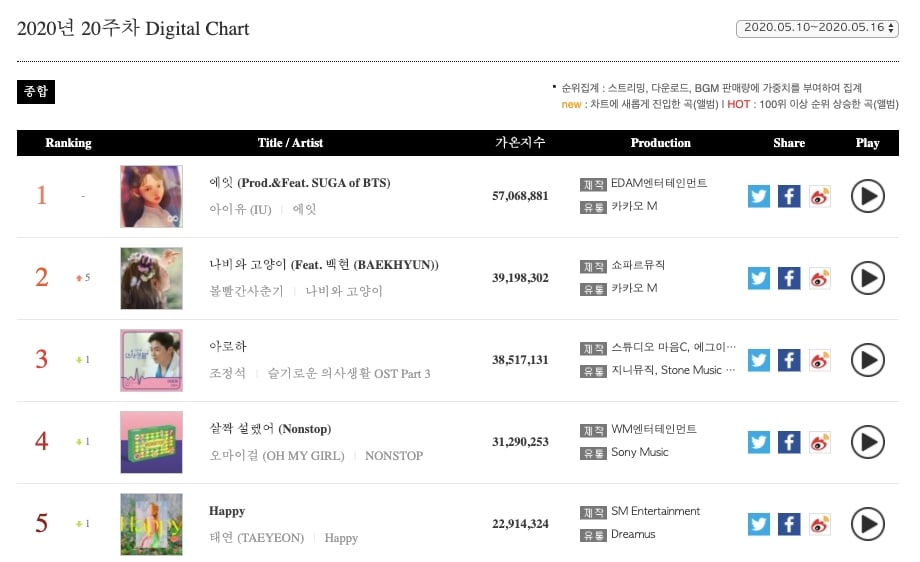 This week’s streaming chart is almost identical to the overall digital chart but has the second and third ranks flipped. Jo Jung Suk’s “Aloha” is at No. 2 while BOL4’s “Leo” takes No. 3. 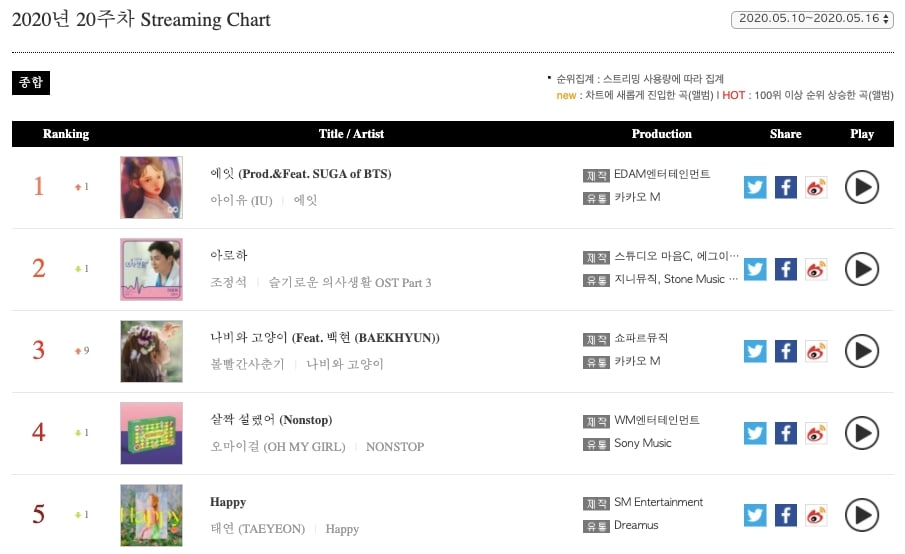 BTS continues to reign over the social chart, while BLACKPINK and Kim Ho Joong (one of the seven finalists on “Mister Trot”) remain at the No. 2 and No. 3 positions respectively. IU moves up to No. 4, and PSY takes No. 5. 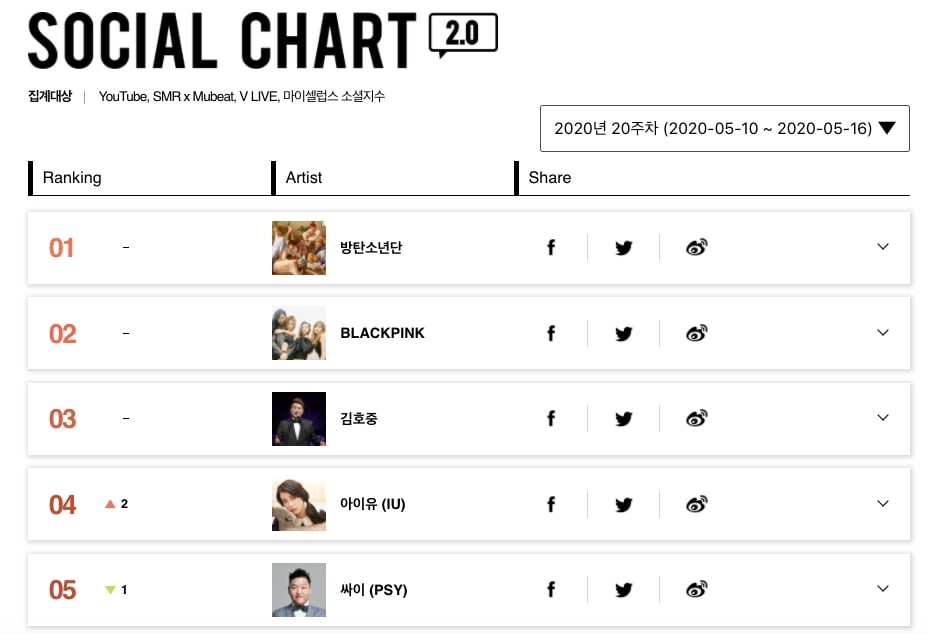