Lee Kwang Soo Shares How Long He Wants To Be On “Running Man,” Talks About Winning At Baeksang Arts Awards, And More

Lee Kwang Soo sat down for an insightful “tipsy interview” with Ilgan Sports!

The interviewer mentioned to the actor that he was named Best Supporting Actor at the 56th Baeksang Arts Awards in June for his performance in the film “Inseparable Bros,” and they asked how he felt when his name was called.

“I was very nervous, and I also honestly hadn’t expected it at all,” he said. “It was such an honor just to be nominated, so I went to the ceremony with the aim of just celebrating, and I was so surprised. It was unbelievable and I got choked up.”

Lee Kwang Soo shared that he’s watched the video of himself accepting the award a lot, commenting that there were several points where he was getting emotional while going up on stage but he did a good job at holding it in.

“I received more congratulations than I do on my birthday,” he said. He shared that Yoo Jae Suk had given him some realistic advice, saying, “I really, really congratulate you, but it could become a controversy so be careful for now.” His “Inseparable Bros” co-star Shin Ha Kyun had thanked him for mentioning his drama.

“A lot of people liked the film when it came out, but I did feel a bit disappointed because I had hoped that more people would like it,” he said. “Some of the senior actors who were there comforted me by saying, ‘I haven’t seen the movie yet but I definitely will,’ and I was also told, ‘Your performance was truly great. I was supporting you and I’m glad you won. Congratulations.’ It felt very new to me.”

When asked whether Yoo Jae Suk’s comment had been a joke, Lee Kwang Soo replied with a laugh, “It was half a joke and half sincere… Because of social distancing, we were a bit far apart but he was still in the seat next to me. When my name was called, there wasn’t anyone near me so I looked over at Yoo Jae Suk, and he wasn’t looking at me [laughs]. He was probably doing that because we had to be social distancing, but my emotions and his seemed very different.”

The interviewer asked if that was why he hadn’t shown much of a reaction when Yoo Jae Suk received his own award that night. Lee Kwang Soo laughed, “No, it wasn’t really like that. During the break after the first part, he gave me a hug. We’re a bit too embarrassed about saying something like ‘Congratulations’ to each other so we didn’t say anything more, but I was happy to be getting an award along with him.” 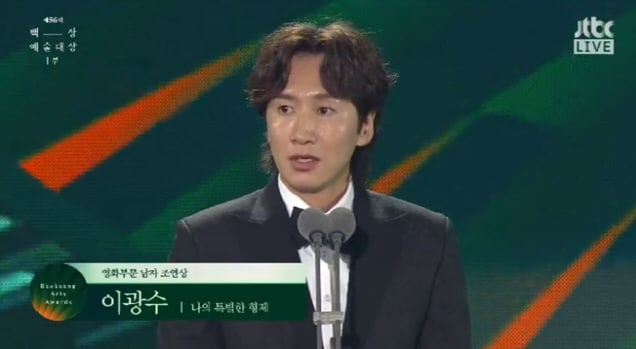 Lee Kwang Soo also talked about reuniting with with his “Sinkhole” co-star Cha Seung Won on “Three Meals a Day.”

“We worked well together on set,” he said. “He always dotes on me [laughs]. He calls me his ‘favorite actor.’ When the director called ‘Cut,’ he’d praise me by saying, ‘Oh, my favorite actor’ and comfort me, and so I remember having a good time filming. The atmosphere was different on ‘Three Meals a Day,’ but after it aired there were photos going around online of me pulling kind of ridiculous and frowning expressions.” He added with a laugh, “I had no idea my face looked like that.”

The actor was asked if he’s friends with the cast of the upcoming film “The Pirates 2.”

“Since I’ve been doing ‘Running Man’ for 10 years, I’ve met most people when they’ve come on as guests,” he shared. “In Kang Ha Neul‘s case, I worked with him in my debut film ‘Battlefield Heroes.’ It was his first film and mine too. We were both the youngest on set and it was the first movie for both of us, so we’d stick together in the corner [laughs].”

“I’m already friends with Han Hyo Joo, but we met in the drama ‘Jewel in the Crown,'” he said. “I also appeared with Kwon Sang Woo in ‘The Accidental Detective 2: In Action.’ EXO‘s Sehun is a member of the Neflix variety show ‘Busted!’ and I knew Chae Soo Bin because we’re labelmates.”

When asked if he purposely focuses on films, Lee Kwang Soo said that’s not the case. “I haven’t had any particular plans to just do films, but I received scripts at the right time, and I chose them because they were projects I wanted to do.”

It was also mentioned that it would be impossible to not bring up “Running Man” in an interview with him, and he was asked how long he’s planning to appear on the show.

“I’ll keep doing it as long as the show isn’t canceled?” he said with a laugh. He also commented, “I think that I am who I am today because of ‘Running Man.’ I love it.”

When asked if the members have ever argued in the past 10 years, Lee Kwang Soo said, “As far as I know, no. The older members are always saying, ‘There aren’t many teams that get along so well.’ Of course, there’s been a crisis about the program in the past, but since it was due to external causes rather than internal ones, I think it made us come even closer together.” 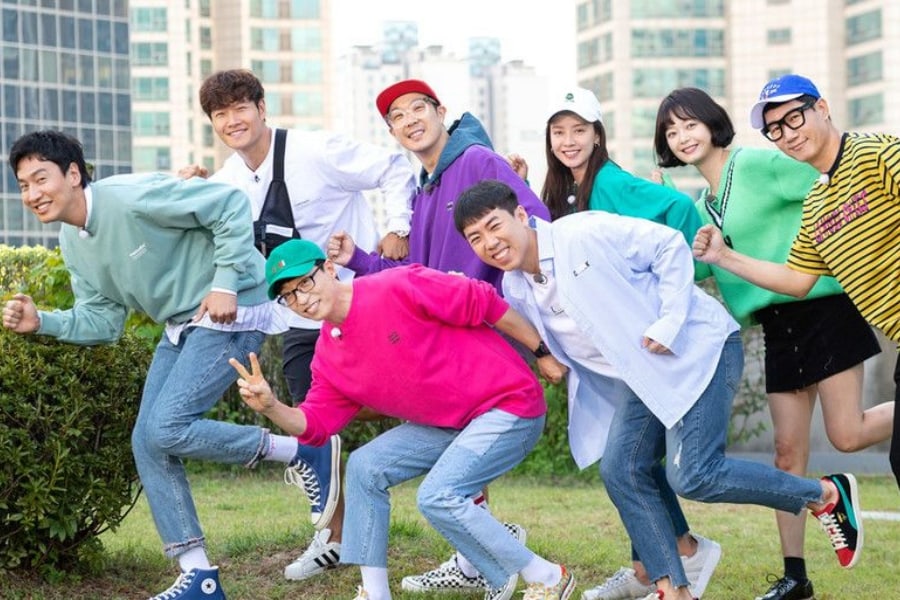 He was also asked if “Running Man” is a reason why he doesn’t often appear in romance projects. Lee Kwang Soo explained that he hasn’t yet received any of that sort of script that he’s really wanted to do. “I also don’t feel like, ‘I have to do romance, I definitely have to,'” he said.

The interviewer commented, “It seems you’re just experiencing real-life romance,” referring to his relationship with Lee Sun Bin. Lee Kwang Soo laughed for a while before saying, “Should we do a shot?” He added, “We can’t see each other often but things are going well. Yes.”