We’ve entered our second week of fantasy K-drama “Tale of the Nine-Tailed” and the show is gradually revealing the backstory as to why our foxes and human have become who they’ve become, as well as continuing to dish out the creepiness (just in time for the Halloween season!). The romance is building itself well too, with Lee Yeon (Lee Dong Wook) very literally going to hell and back for Nam Ji Ah (Jo Bo Ah).

Here are five of the major revelations from this week’s episodes, including the resolution to the fishermen storyline as well as a new antagonist in town:

Not her. This is the cool Granny with the perfect eye-roll!

Warning: Major spoilers for episodes 3 and 4.

What’s with the fishermen?

We already saw signs of the fishermen being cursed in the second episode, but the why of it all was made clearer in episode three. While out at sea, the four fishermen, including Mr. Seo, were capsized by a big wave and stranded on a lifeboat. Dying of hunger and thirst, they turn their eyes onto Mr. Seo and decide to kill him. (The three culprits, after being cursed, show mirroring signs such as crying of thirst and thus drinking themselves to death).

Later, we also find out that the one who cursed them is Pyung Hee, Mr. Seo’s daughter, courtesy of a deal she made with Rang (Kim Bum). Moreover, this really is all just a ruse of his, a distraction of sorts to occupy Yeon and Ji Ah’s attention while they’re on the island. While being confronted by Ji Ah, Rang similarly provides his evil-wish-granting service to her, saying that he can help her find her parents, but Ji Ah smartly declines.

There’s a lot of viewers watching this show for the romance and/or the bromance, but there’s delicious chemistry between Jo Bo Ah and Kim Bum too! That scene is just brimming with chemistry! 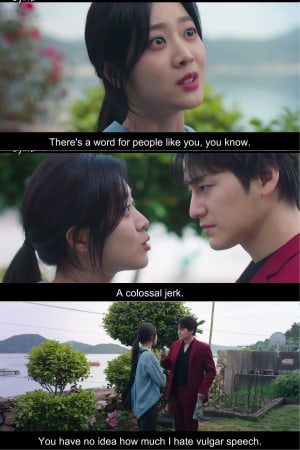 Every few years, a woman is sacrificed on the day of the Ghost festival (July 15th of the lunar calendar) by a never-aging-shaman, and this year, the “lucky” woman is Ji Ah. (The fishermen’s deaths were part of Rang’s plan to lure her onto the island). After getting drugged by the shaman, Ji Ah is tied down and kidnapped to the ritual site by a well. Curiously, the shaman was truthful when she said she knew Ji Ah’s mother, and right before she begins the ritual, she sneers that Ji Ah had tricked her mother while she was still in her womb.

Yeon, startled that he suddenly loses Ji Ah’s scent, looks around for her but to no avail. He declares his status as the original mountain spirit, asking the woods to lift the darkness and lead him to Ji Ah. While his commands are met with silence at first, the leaves soon start rustling and you can feel the magic filling the forest. Fireflies flock in and make a pathway for him to where the ritual site is.

However, upon reaching Ji Ah, he’s met with one of the shaman’s protective warding (evening primrose scattered in a circle) and he can’t get past it no matter how hard he tries. Seeing Ji Ah about to fall into a well, he again unleashes his powers and summons rain to wash away the circle of evening primrose, while also calling down a strike of lightning to kill the shaman.

Yeon manages to save Ji Ah from falling into the well, but there’s something dodgy about it. And our suspicions are confirmed when the villagers flock to the well like a herd of mindless zombies. It’s unclear what lured them over, but what we do know is that that is the last we see of any of them. Come daybreak, Ji Ah realizes that the village has become a ghost town. Each and every one of those villagers has disappeared!

This week, we learn that Rang was once a compassionate and loving child, one who couldn’t even walk past an injured dog and one who looked up to his big brother. But after Yeon fell in love with Ah Eum and shed his master of Baekdudaegan status, he technically also left Rang. Years after they lost touch (Rang thought Yeon had died), Rang turns into a bloodthirsty creature killing humans because he thinks they are all despicable. And it’s at this point where the brothers finally reunite. Rang is overjoyed to see his big brother still alive, so imagine his shock when he finds out that Yeon is actually sent there by the afterlife judges to “take care” of him. Rang’s anger and sense of betrayal is fully understandable and it’s easy to see that behind his mischievous smile lies a hurt little boy.

Yeon too knows this, and his reluctance and powerlessness at the situation is written all over his face. He completes his mission but “misses” the vital point, which is why Rang is still alive today (but with a horrible scar across his stomach). In present day, though Rang taunts him to kill him again, Yeon still refuses to give in, instead telling him to stop acting like a petulant child.

The relationship between these two half-brothers — the push and pull between them — is heartbreaking but so fun to watch. Interestingly, when Rang confronted Yeon during their first reunion as to why he never came back for him, Yeon replied that he couldn’t find him and that he had lost him. Was someone purposely keeping the brothers apart? And if so, is Rang just an unsuspecting pawn in someone else’s evil-er plan? 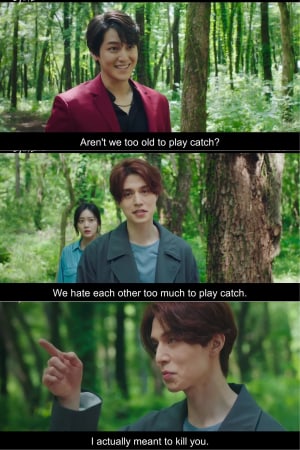 Sidebar: This little eyebrow raise is just. so. sexy!

What’s with the children?

To thank Yeon for having saved her twice now, Ji Ah invites Yeon over for a home-cooked meal. And because it’s only polite to bring something for the owner of the house, Yeon brings Ji Ah some mugwort. Heh!

Yeon also notices more and more similarities between Ji Ah and Ah Eum, like the way they would pat his head, or block their ears when they cry. All these memories flood Yeon’s mind, so he can’t help but promise Ji Ah that he’ll make sure she’ll find her parents and that she’ll get to enjoy a long life of normalcy.

Knowing he has to leave for awhile to serve out his punishment for killing the shaman, Yeon gives Ji Ah a talisman to help ward off evil spirits from the funeral home she’s visiting. However, at the funeral home, Rang pops by and secretly slices the talisman, rendering it useless. And that’s when things get really creepy. This funeral home is built on a children’s cemetery, so it’s filled with ghost children, two of which latch onto Ji Ah. They follow her around and strangle her with her own scarf, then continue to chase her into locked buildings. (That scene with a dozen of their little hands banging on the locked door is really creepy.)

Ji Ah is chased up to a rooftop and cornered by all the ghost children. With no way out, Ji Ah can’t help but think of how Yeon has saved her from the horrors again and again, and yearns that he would appear. Unluckily for Ji Ah, Yeon is busy chained up in the Snow Mountain prison (where time flows differently and he’s left there to suffer in a mortal body). He senses that the talisman isn’t working and begs Granny Taluipa to let him serve out his sentence in the Underworld of Knives instead, which — though much more dangerous — would be over more quickly. Granny consents, and so Yeon braves the bridge with knives literally flying into him and slicing his bare body.

Obviously, we know Ji Ah would be saved one way or another, but the way the drama intercuts Ji Ah’s terror and Yeon’s desperation really amps up the tension. And when Ji Ah falls off that rooftop, we were all holding our breaths waiting to see just how she would be saved. At the very last minute, Yeon lunges into the scene and breaks Ji Ah’s fall right before she hits the ground. It’s not pretty, which again emphasizes just how close they were cutting it.

Ji Ah is startled to see that Yeon is so severely injured and cries over his unconscious self. And as her tears fall, we see a bubble of energy manifesting around her! It’s the (fox bead?) bubble we saw when Yeon gave Ah Eum his fox bead, right before she crossed the Sando river. Yeon wakes up in time to see this and contently breathes, “I found you.”

The drama has been pretty heavy handed with dropping clues that Ji Ah is in fact Ah Eum, so it’s great that they straighten this out in the second week, rather than forcing the viewers to play dumb. And now that we’re all on the same page regarding Ji Ah’s identity, the mystery now is — why can’t Yeon sense the fox bead? Is the same person who kept the brothers apart also suppressing the fox bead? And if so, all the Ah Eum-lookalikes that Yeon found over the years — were they also Ah Eum’s reincarnate? Has Yeon tragically missed Ah Eum time and time again?

What’s with the no-feet dragon?

Rewinding a bit to the island, we also learn that all the villagers have a painting of the Dragon King in their houses. Except, on closer inspection, Ji Ah notices that the Dragon King is missing his feet. And a dragon without feet is nothing more than a serpent. This piece of information alarms Yeon, because a serpent creature — the imoogi — was responsible for Ah Eum’s death centuries ago and Yeon killed it right after. 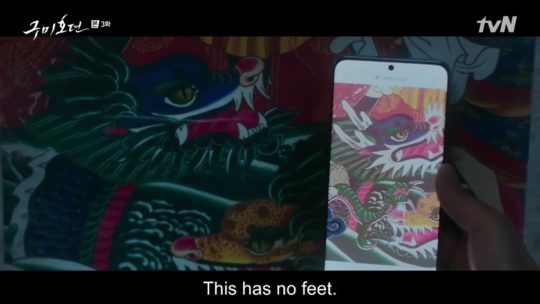 However, everything about the village hints to the imoogi’s return, including having a “welcoming ritual” for something evil. And the night before all the villagers go missing, we see Rang handing a wrapped baby over to a butler-type person, who takes it and provides a… loving home for it? Yea, I don’t think so either.

Have you been keeping up with this drama? Is it turning out darker than you expected it, and if so, are you enjoying it more or less because of it? Let us know in the comments below!

Belinda_C loves how when the brothers fight, they really don’t hold back! Heh! Talk dramas, SEVENTEEN and Shinhwa with her on Twitter!