Gaon Chart has revealed its chart rankings for the week of October 25 to October 31!

On November 5, Gaon Chart officially announced, “BTS’s ‘Dynamite‘ achieved the honor of a double crown for the week of October 25 to October 31 after returning to No. 1 on both the overall digital chart and the streaming chart for the first time in three weeks.”

SuperM’s first full-length album “Super One” topped this week’s physical album chart, while TWICE’s new title track “I CAN’T STOP ME” debuted at No. 1 on the digital download chart.

Finally, BLACKPINK continued their winning streak at No. 1 on Gaon’s Social Chart 2.0 for the 23rd consecutive week.

SuperM’s “Super One” entered the physical album chart at No. 1 this week, while TWICE’s “Eyes wide open” and TXT’s “minisode1: Blue Hour” debuted at No. 2 and No. 3 respectively. The Kit version of NCT’s “RESONANCE Pt. 1” entered the chart at No. 4, and SEVENTEEN’s “; [Semicolon]” rounded out the top five for the week. 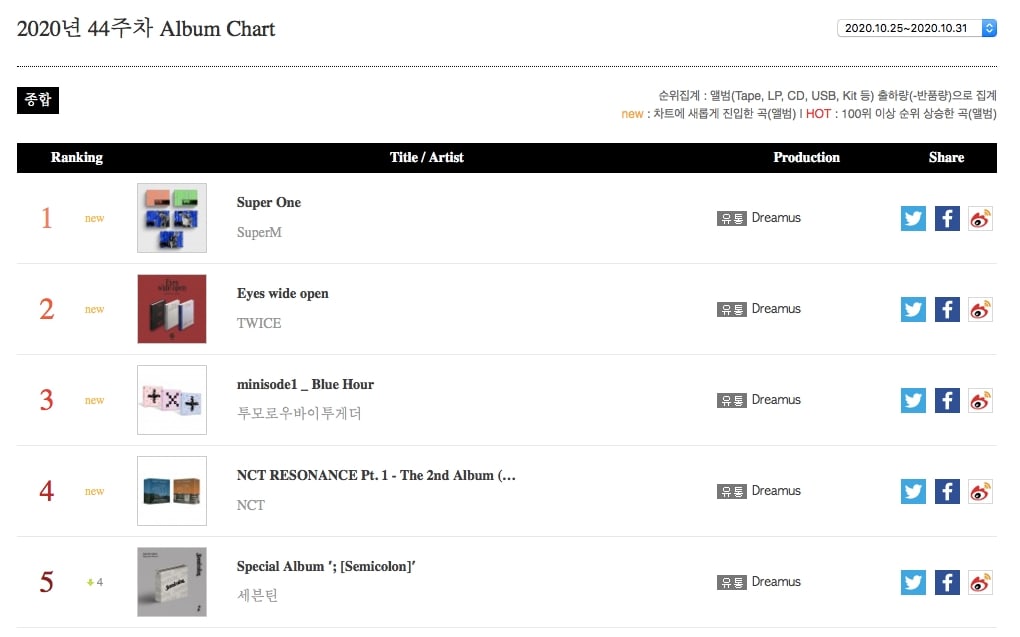 TWICE’s new title track “I CAN’T STOP ME” topped this week’s digital download chart, followed by Jang Beom June’s “Can’t Sleep” at No. 2 and Im Chang Jung’s “Love Should Not Be Harsh on You” at No. 3. “How Do You Play?” project group Refund Sisters’ “Don’t Touch Me” stayed strong at No. 4, while BLACKPINK’s “Lovesick Girls” climbed back up the chart to No. 5. 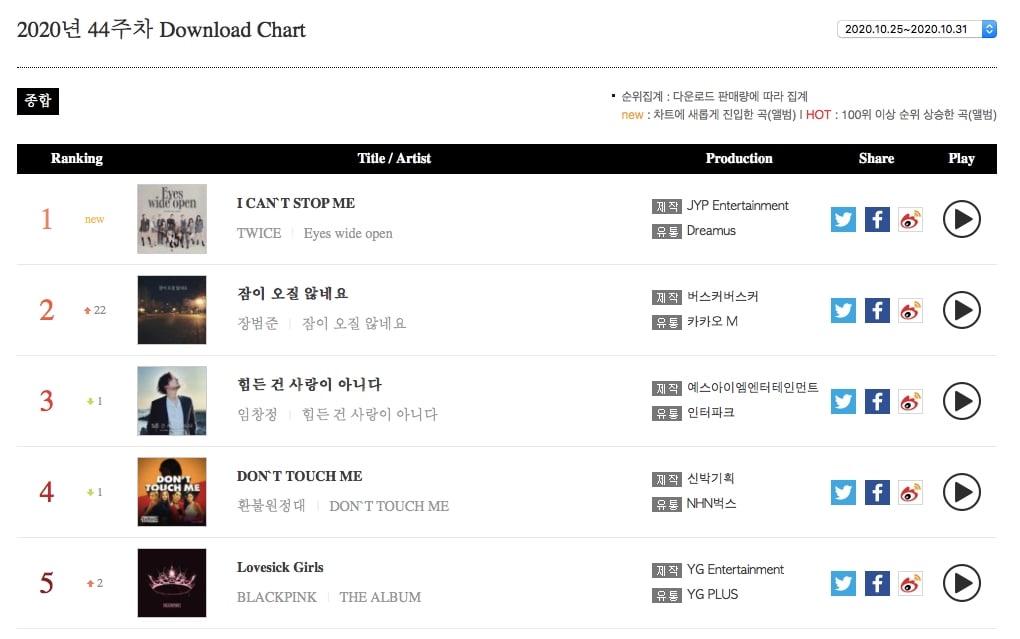 The top five songs on the overall digital chart and the streaming chart were exactly the same this week: BTS’s “Dynamite” climbed back up to No. 1 on both charts, with Refund Sisters’ “Don’t Touch Me” at No. 2, BLACKPINK’s “Lovesick Girls” at No. 3, Im Chang Jung’s “Love Should Not Be Harsh on You” at No. 4, and B1A4’s Sandeul’s “Slightly Tipsy” at No. 5. 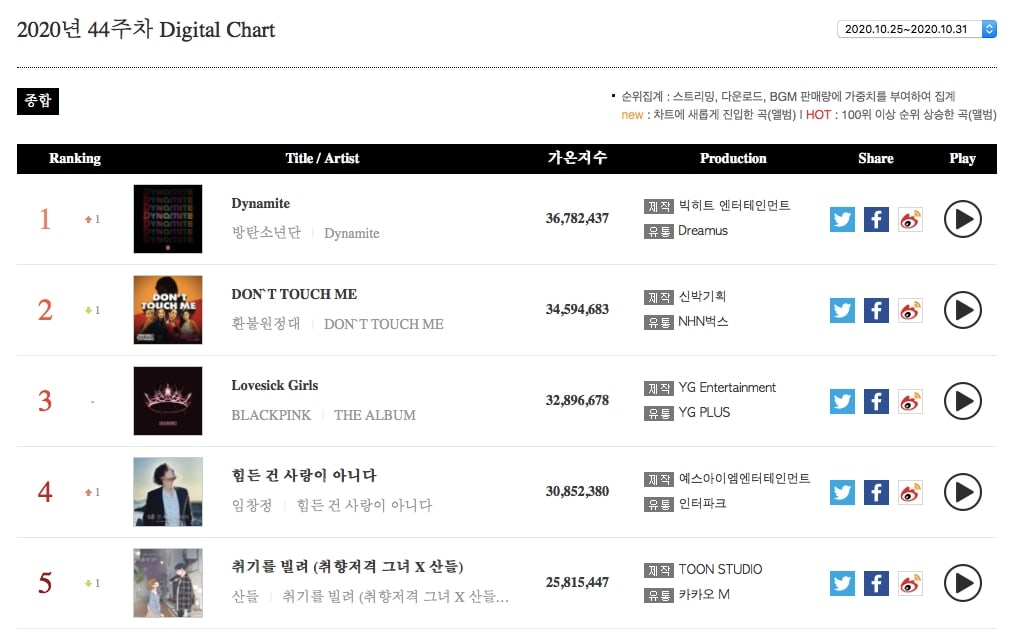 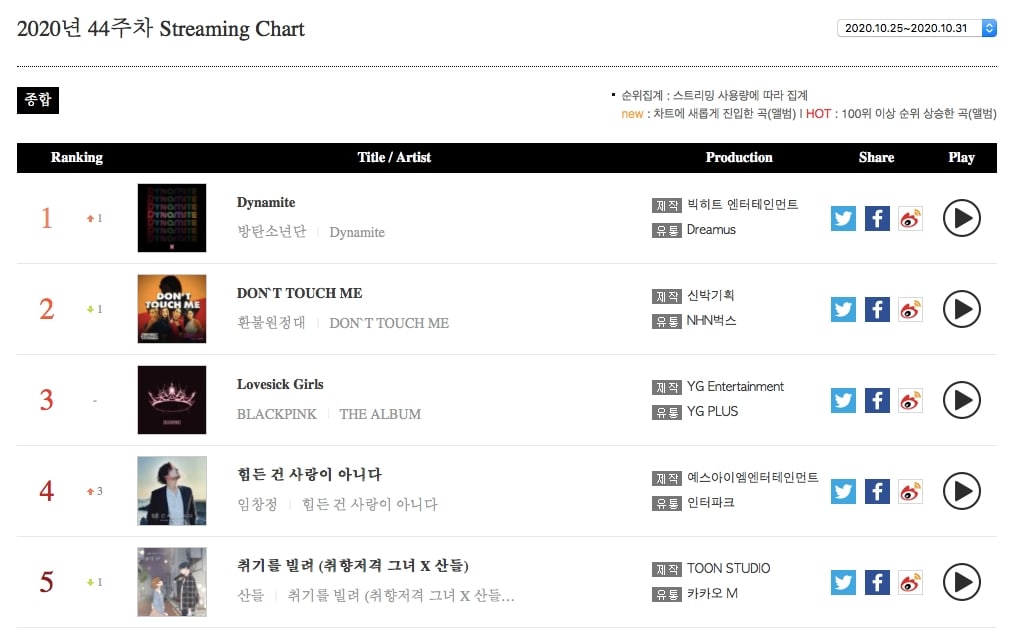 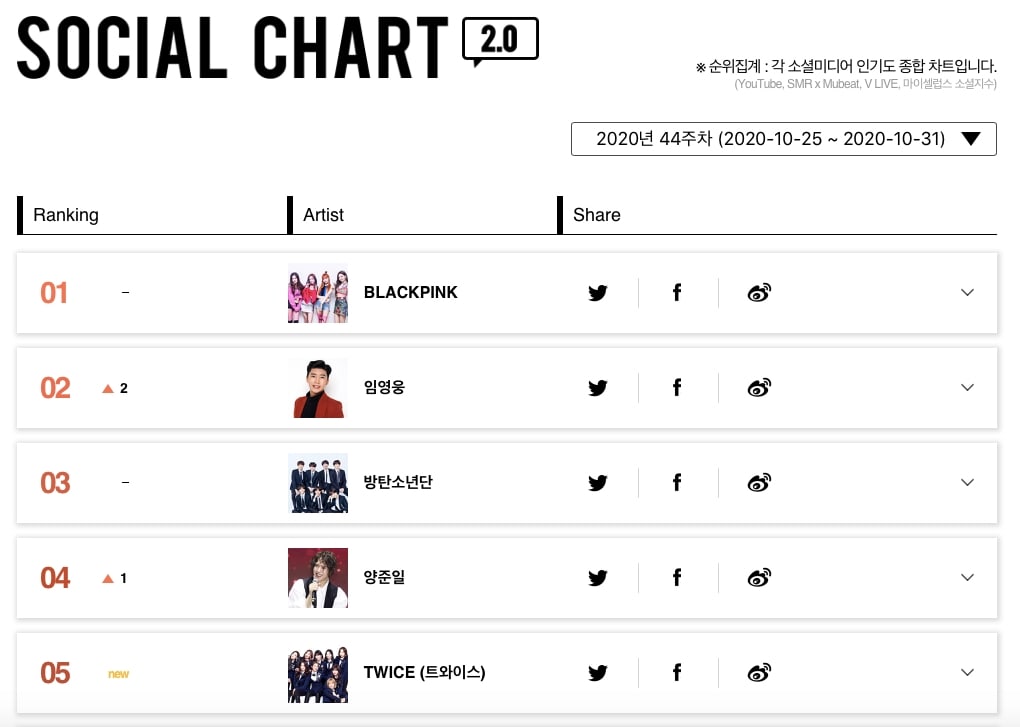