SHINee’s Key Talks About Working With BTOB’s Changsub, His Advice To Taemin About Military Service, And More

On the November 11 episode of MBC’s “Radio Star,” Lee Juck, Paul Kim, Jung In, and SHINee’s Key appeared as guests.

During the episode, Key talked about enjoying his time in the military. He was discharged from mandatory military service in October.

He shared that he still has some habits from military life, saying, “It’s the first time in 10 years that I’m living according to a routine. I’m grateful for the routine. I’m sticking to the patterns that I learned in the military. I didn’t know how great it was to enjoy the full length of the day.”

As the youngest, Taemin is the only member of SHINee who has not yet enlisted in the military. Key said, “There were times in our career that we had two years between albums. I regretted that I didn’t go earlier during one of those times. I told Taemin to go as soon as possible, but he didn’t listen to me.”

Key continued, “Military life was the easiest for me. It was so simple to be told what to do and what not to do. Before then, I worried and thought a lot about what I should do, and I didn’t always get the results I wanted. I had no ‘off’ switch. I kept getting more and more sensitive.”

After hearing Paul Kim’s stories about his military service, Key said, “I was comfortable with the hierarchical nature of the military. If my superior ordered me to do something, I didn’t have to think for myself. But there were always people who asked, ‘But we did this yesterday?'” 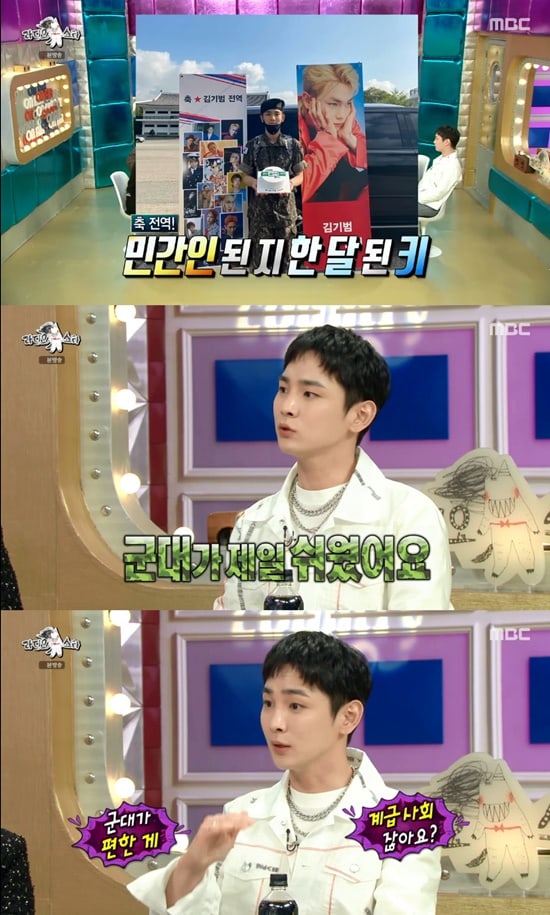 Asked if he had ever rebelled during his service, Key shared a story about working with BTOB’s Changsub. He said, “I’m the same age as Changsub. He’s my junior in the music industry, but he enlisted before me. When we did events together, I was the type to start preparing a week in advance and he was the type to leave it all until two days before.”

Because Changsub was his senior in the military, Key tried to be patient, but soon hit his limit. He organized ensemble rehearsals without Changsub and wrote the script for their lines himself and even highlighted Changsub’s parts for him.

Key said, “I even ironed the event uniforms myself. I went to the center to say something to him, but he was taking a nap! I’m supposed to use da-na-ka [formal, military-style] speech in the military, but I couldn’t hold it in anymore because I was so angry. I said to him, ‘Here! I did everything!'”