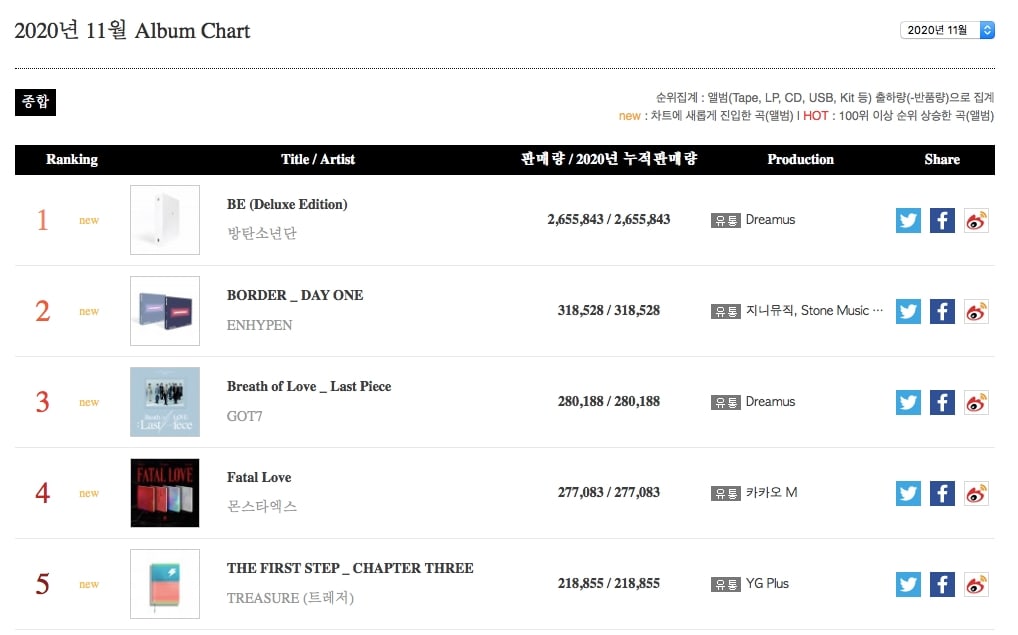 NCT’s “RESONANCE Pt. 2” debuted at No. 1 on the physical album chart for the week of November 29 to December 5, while ENHYPEN’s “BORDER: DAY ONE” and GOT7’s “Breath of Love : Last Piece” made their respective debuts at No. 2 and No. 3. EXO’s Kai’s solo debut release “KAI” entered the chart at No. 4, trailed by Henry’s “Journey” at No. 5. 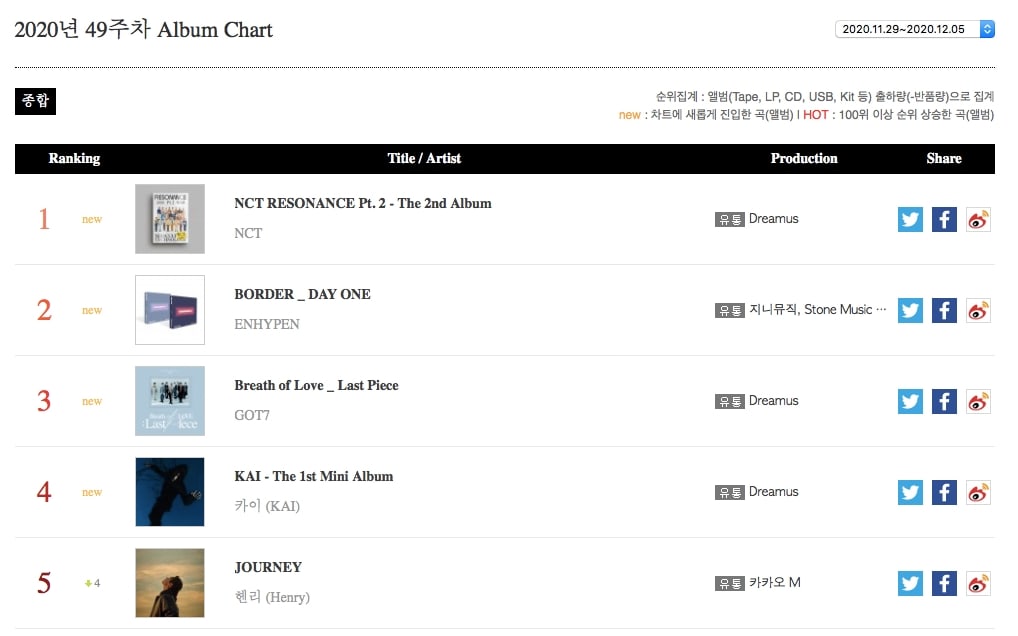 The top five songs on the overall digital chart and the streaming chart were exactly the same for November: BTS’s “Dynamite” topped both charts for the third consecutive month, followed by Im Chang Jung’s “Love Should Not Be Harsh on You” at No. 2, BLACKPINK’s “Lovesick Girls” at No. 3, Jang Beom June’s “Can’t Sleep” at No. 4, and B1A4’s Sandeul’s “Slightly Tipsy” at No. 5. 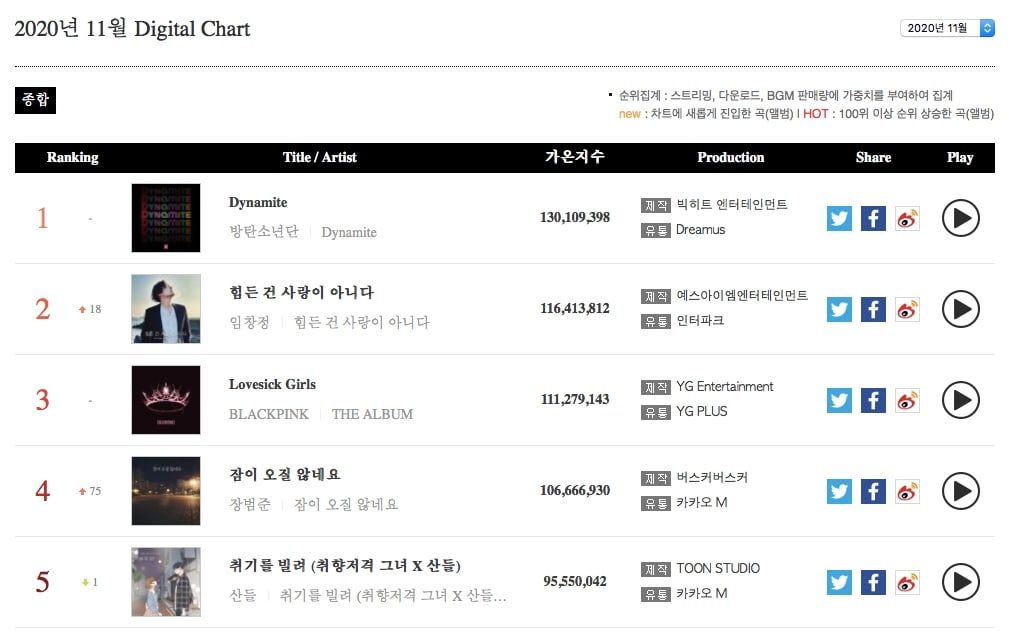 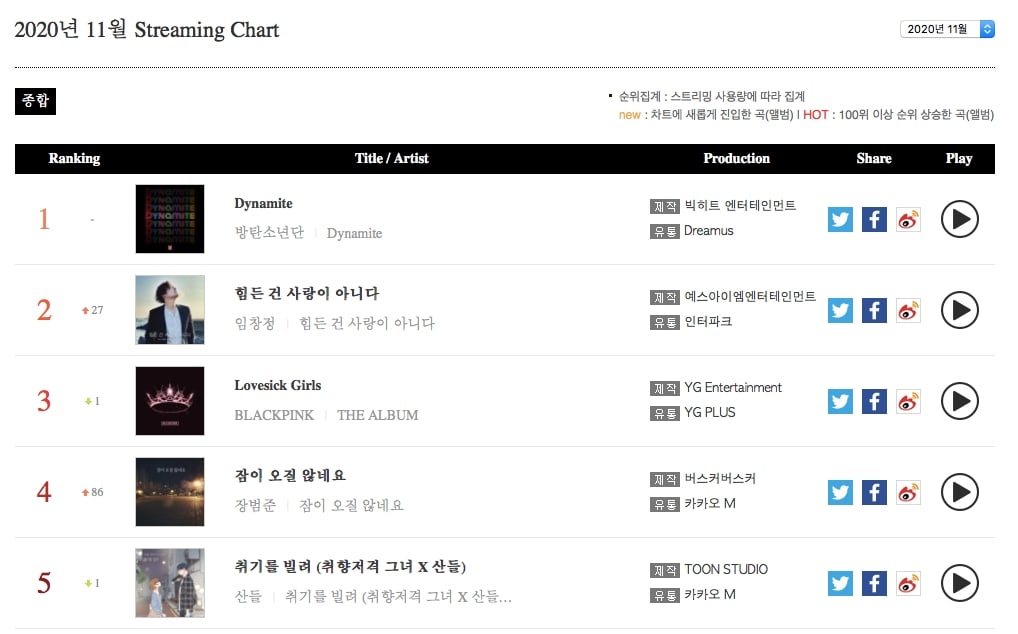 The top five songs on this week’s overall digital chart were exactly the same as last week: “Show Me the Money 9” rappers Miranni, Munchman, Khundi Panda, and MUSHVENOM’s hit collaboration “VVS” (featuring JUSTHIS and produced by GroovyRoom) remained No. 1, while BTS’s “Dynamite” and “Life Goes On” held onto their spots at No. 2 and No. 3 respectively. Jang Beom June’s “Can’t Sleep” maintained its position at No. 4, and Im Chang Jung’s “Love Should Not Be Harsh on You” rounded out the top five. 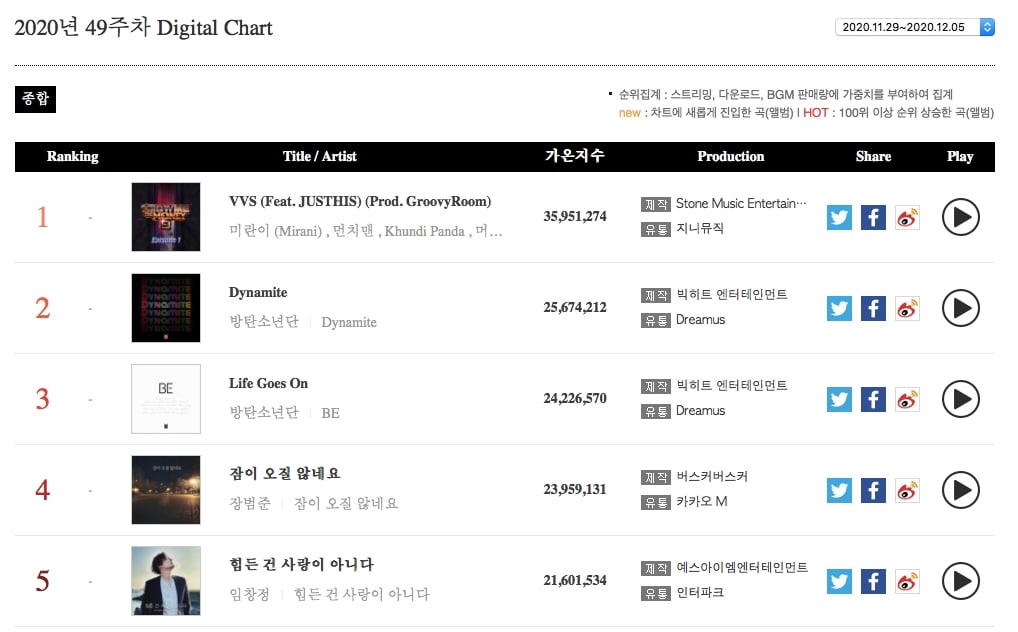 Miranni, Munchman, Khundi Panda, and MUSHVENOM’s “VVS” also continued to top the streaming chart this week, with BTS’s “Dynamite” at No. 2 and Jang Beom June’s “Can’t Sleep” at No. 3. BTS’s “Life Goes On” rose to No. 4 on this week’s chart, and Im Chang Jung’s “Love Should Not Be Harsh on You” came in at No. 5. 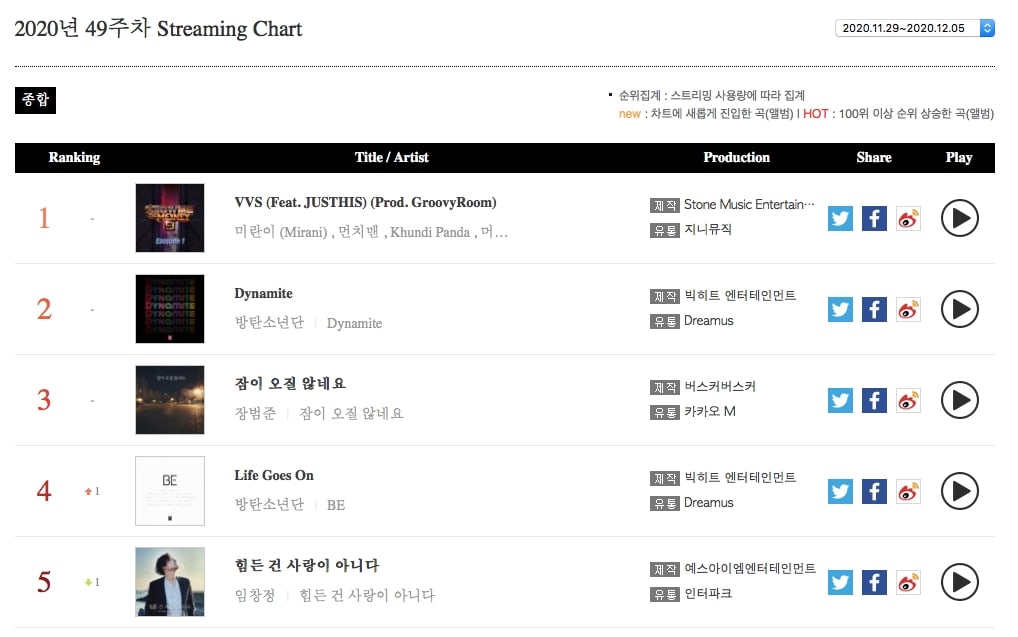 Im Young Woong’s “HERO” topped the digital download chart for November, followed by BTS’s “Life Goes On” at No. 2 and Ha Sung Woon‘s “Forbidden Island” at No. 3. Im Young Woong also claimed No. 4 on the monthly chart with his song “Trust in Me,” while SHINee’s Taemin rounded out the top five with his solo track “IDEA.” 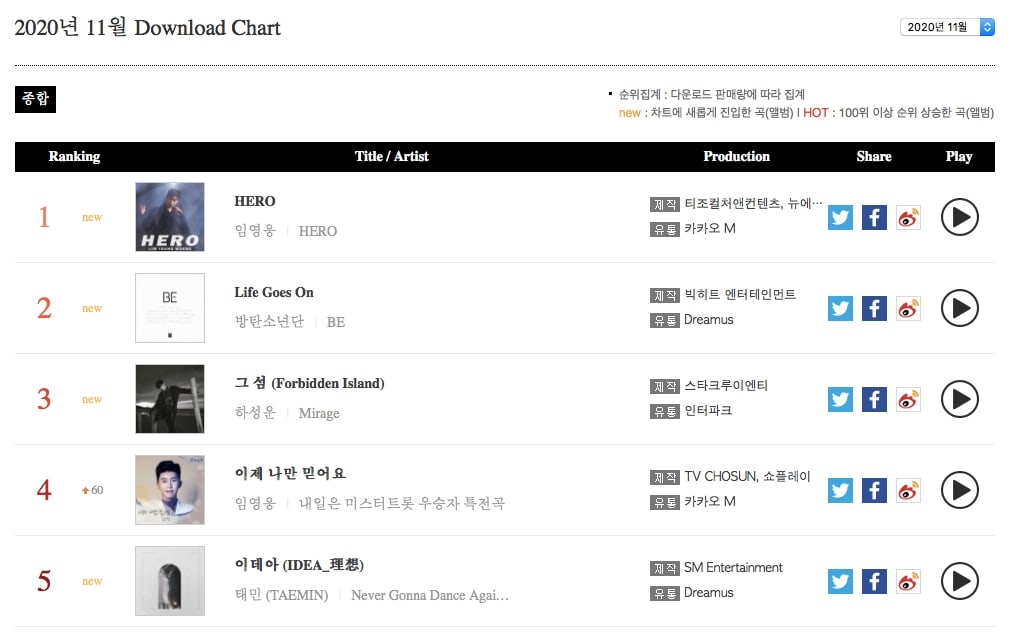 EXO’s Kai topped this week’s digital download chart with his solo debut track “Mmmh.” GOT7’s new title track “LAST PIECE” entered the chart at No. 2, while BTS’s “Life Goes On” held onto its spot at No. 3. Kim Jae Hwan’s collaboration with Bunny and Guys, “At Every Moment,” debuted at No. 4 on the chart, trailed by Im Young Woong’s “HERO” at No. 5. 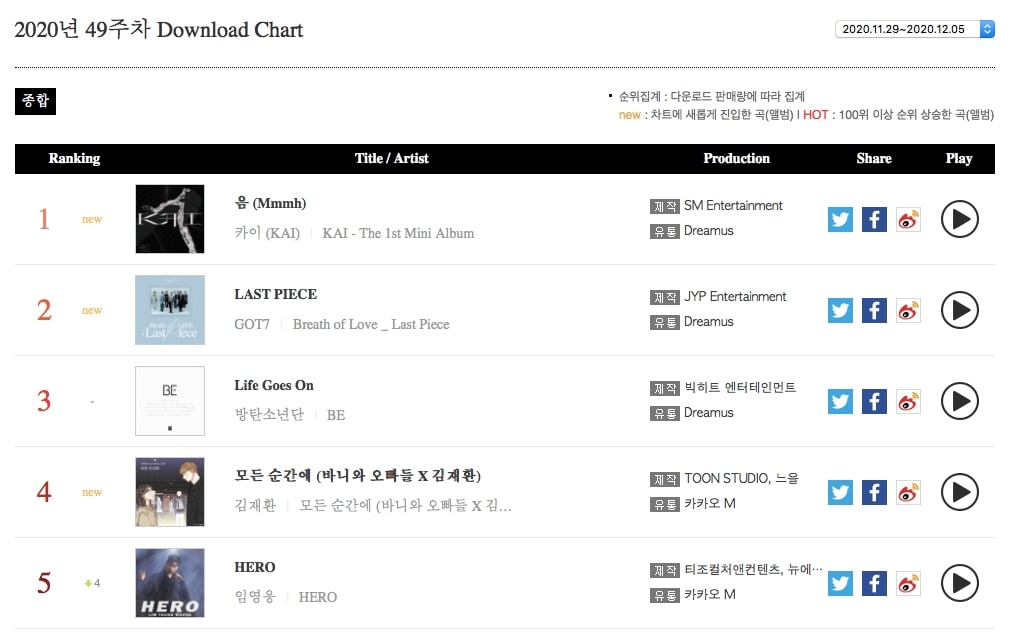 BLACKPINK successfully defended their position at No. 1 on Gaon’s “Social Chart 2.0” for the seventh month in a row, followed by BTS at No. 2, Im Young Woong at No. 3, and Yang Joon Il at No. 4. Finally, SM Entertainment’s new girl group aespa made their debut on the monthly chart at No. 5. 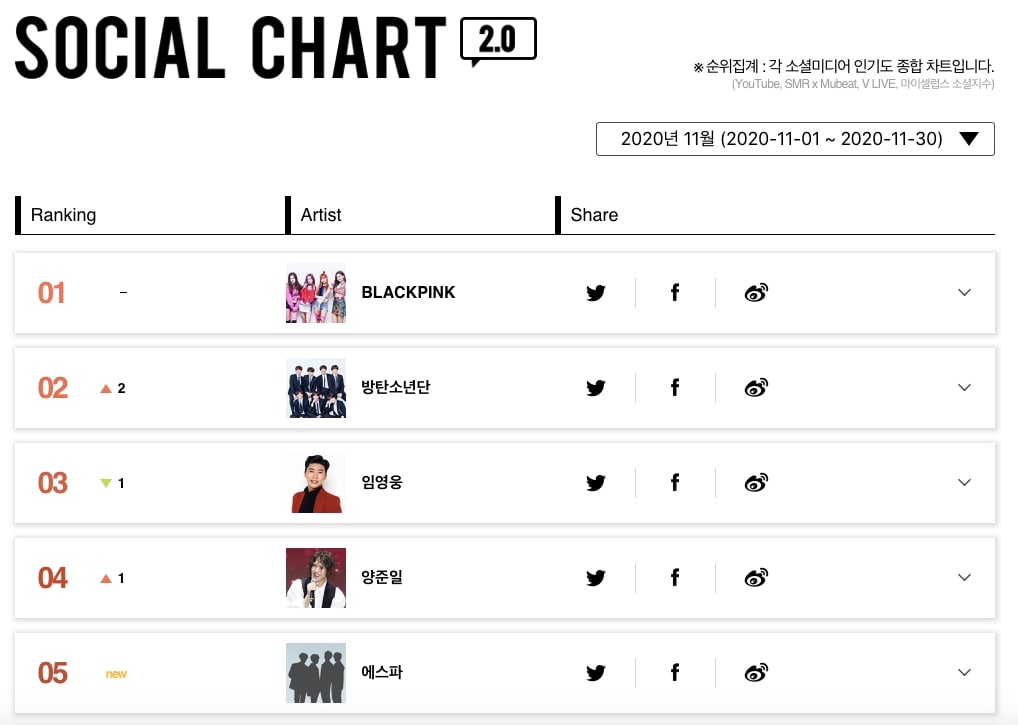 BLACKPINK also topped the weekly “Social Chart 2.0,” with BTS and Im Young Woong maintaining their positions at No. 2 and No. 3 respectively. Yang Joon Il came in at No. 4, and Kim Ho Joong rounded out the top five for the week. 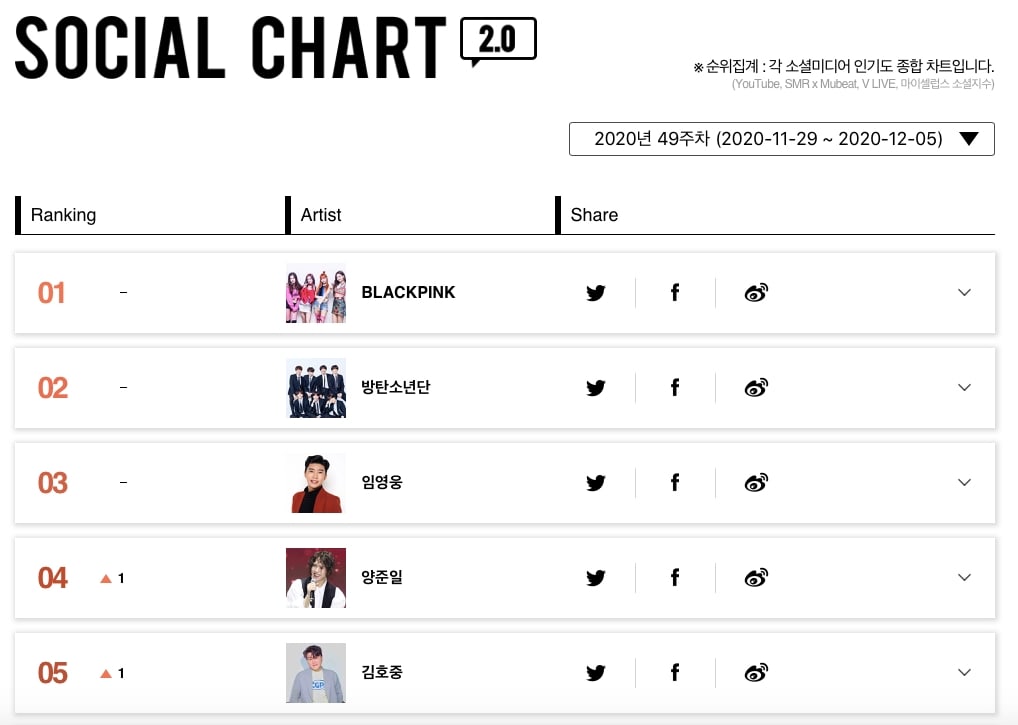