Mnet has shared a fun video of TVXQ reviewing performances by the groups that will be competing on “Kingdom”!

The newly released clip begins with the TVXQ members sharing their nervousness and excitement about hosting the upcoming idol competition program, on which they will serve as MCs.

After pointing out that “Kingdom” will mark their first time hosting a show together, Changmin jokingly worries that people will complain, “[TVXQ] has been around for 17 or 18 years, and this is best they can do?” Yunho then asks the production staff with a panicked expression, “You’re not going to suddenly give us scary missions on the spot or anything, are you?”

When asked how they felt after first receiving the offer to host the show, Changmin replies, “It’s our first time leading a program together as MCs, and honestly, the thought that we’d be guiding younger artists made me think, ‘We need to be careful and do a good job.'” Yunho chimes in, “As MCs, we shouldn’t be biased towards one group over another, so I worried a lot about that.”

Changmin goes on to reveal that while watching “Road to Kingdom”—the “prequel” to “Kingdom” that aired last year—he found himself rooting for THE BOYZ’s Q in particular.

Using Q’s given name, Changmin remarks, “There’s a kid named Changmin in THE BOYZ. Back then, I didn’t know I would become an MC, so I somehow kept paying more attention to him in particular.” The production staff then points out that there’s also a TVXQ namesake in ATEEZ, and Yunho immediately replies, “Yes, there’s a Yunho.”

The staff then asks TVXQ to watch performances of the six competing groups and share their thoughts on them. First up is THE BOYZ’s legendary cover of SHINee’s Taemin’s “Danger” from “Road to Kingdom,” which even caught the eye of Taemin himself.

As soon as Q appears on screen, Changmin exclaims with an excited laugh, “Oh, it’s Changmin!” The two TVXQ members then marvel at the difficulty of the part in the choreography where Sunwoo jumps off four of his bandmates’ backs as they also jump off the floor at the same time.

Changmin comments, “I got goosebumps,” and Yunho chimes in, “I think this group’s physical fitness is impressive.” He later adds, “There are advantages and disadvantages to having a lot of members, but it can be an advantage if they maximize their use of formations. I think that if they recognize that and use it in a clever way, they’ll be able to put on a really cool performance.” 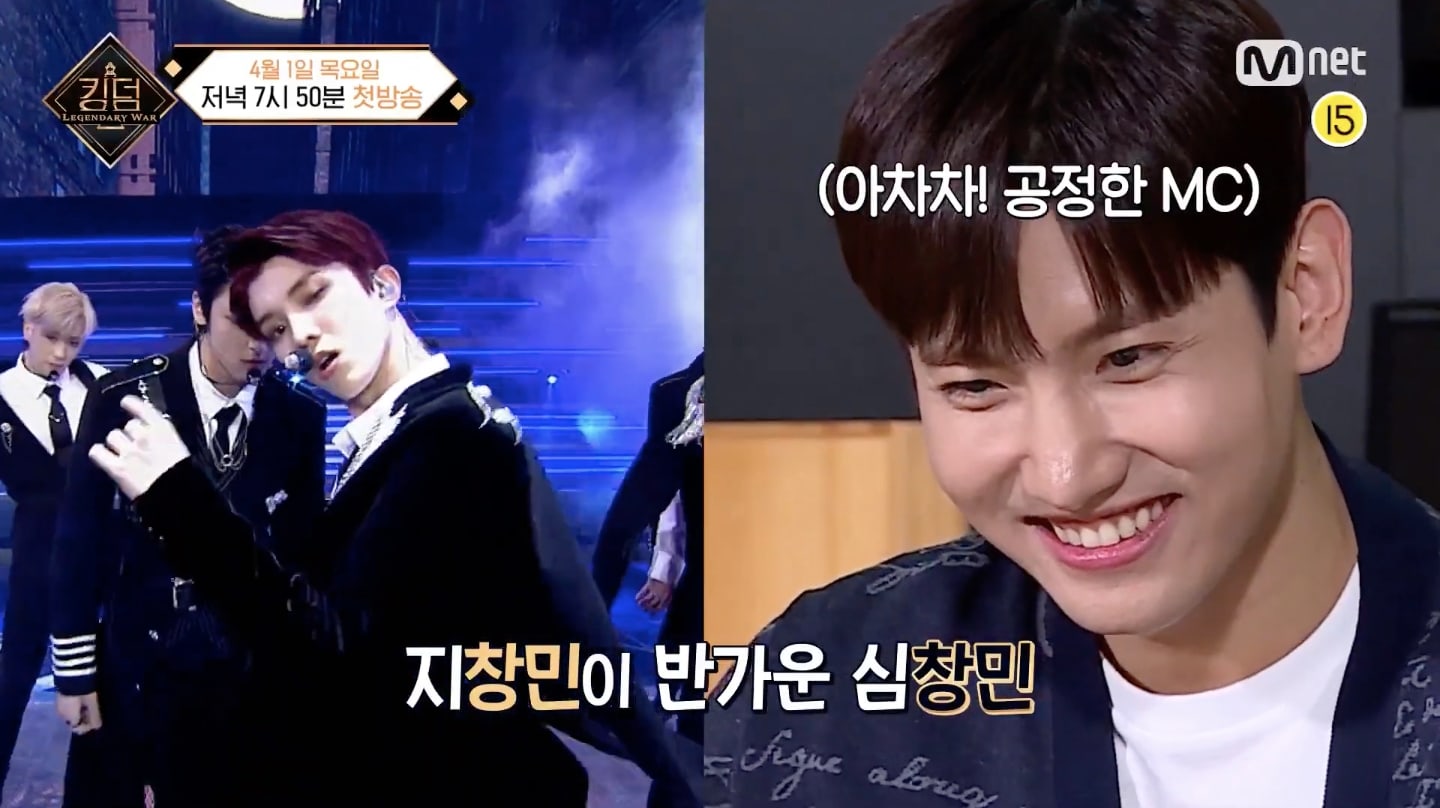 The next performance is Stray Kids’ “God’s Menu,” and while watching Felix’s part, Changmin remarks in awe, “How can someone with such a pretty face dance like that?” Yunho adds, “The energy they give off is great.” Changmin continues, “The lyrics to the song are really cute, which makes it surprising how cool they look.” 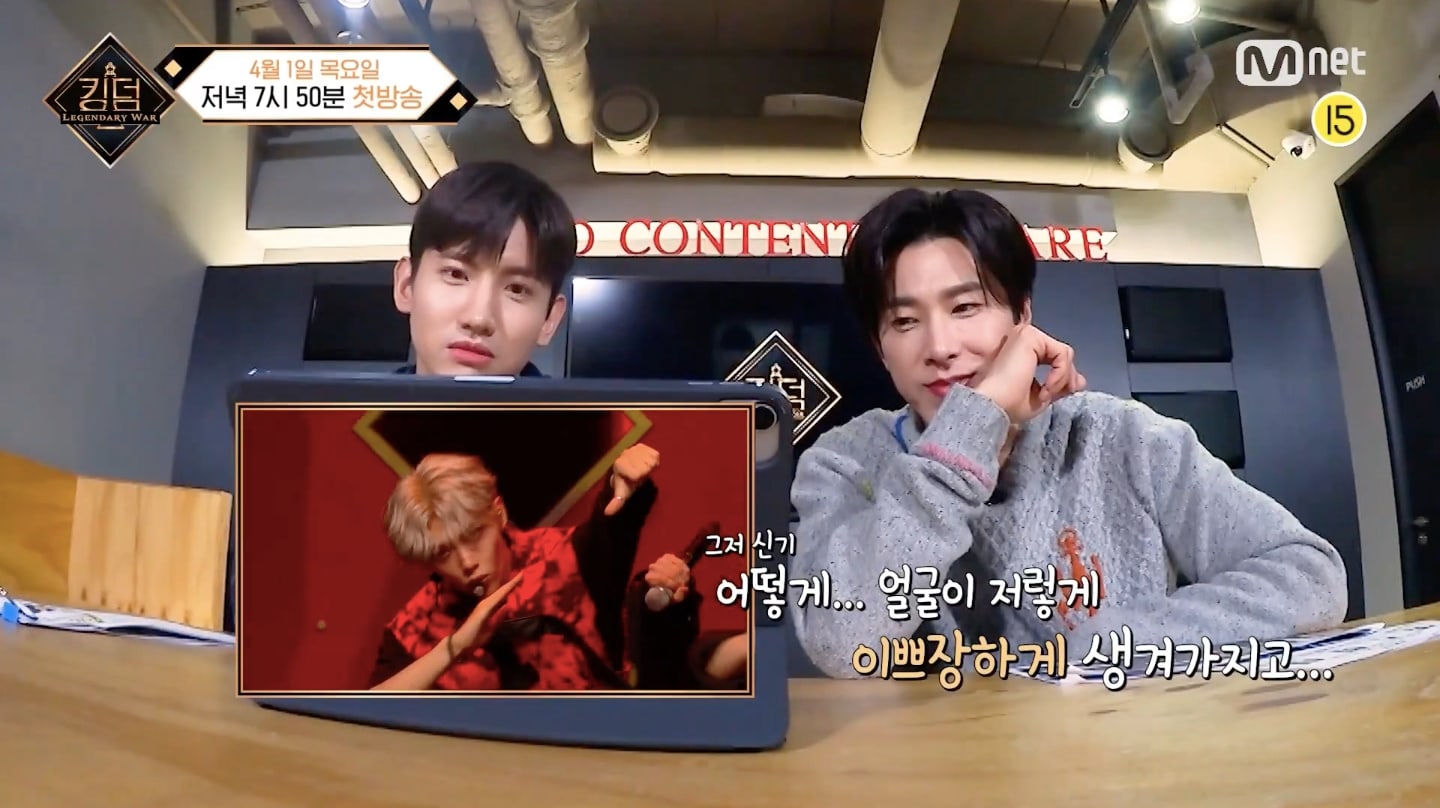 While watching ATEEZ’s “HALA HALA,” Yunho remarks with an impressed laugh, “They’re kind of angry. The look in their eyes has a lot of impact—it’s like they’re saying, ‘I’m going to burn up this stage.'” Changmin agrees, “[Their eyes are saying,] ‘I’m still hungry [for success].”

He adds self-deprecatingly, “It’s this kind of thing that makes me realize I’ve become an old fart.” Yunho points out, “They’re a group that’s receiving a lot of attention abroad,” and Changmin adds, “I think [‘Kingdom’] will be a really good opportunity for them.” 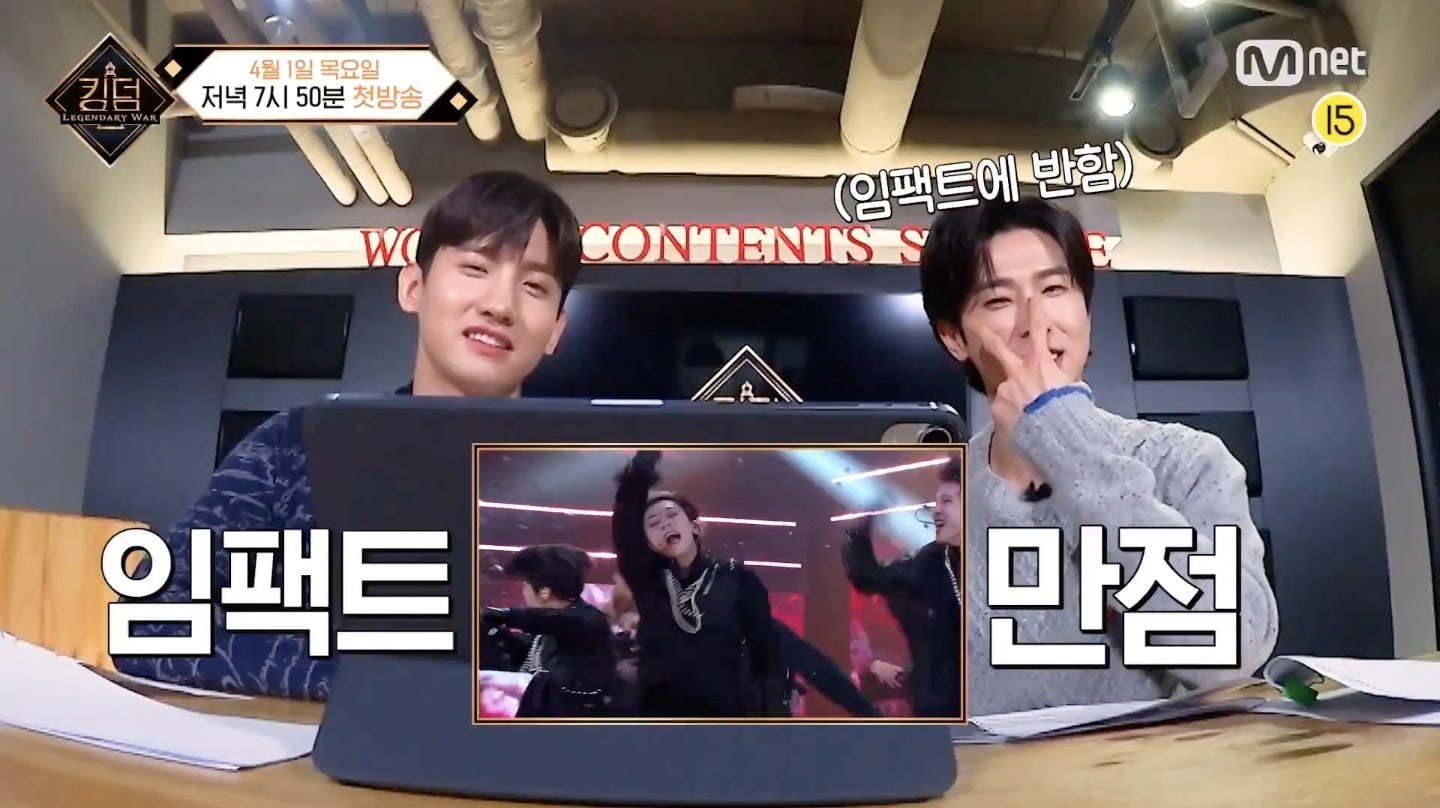 Next up is SF9’s “Good Guy,” and Yunho comments, “You can tell that there are actors in this group.” The two TVXQ members go on to marvel at how tall they are, with Changmin remarking, “Since they’re tall, they have long arms and legs, and that makes their movements bigger [while dancing].”

Later on, Yunho adorably starts singing along to the song in the middle of watching SF9’s performance. 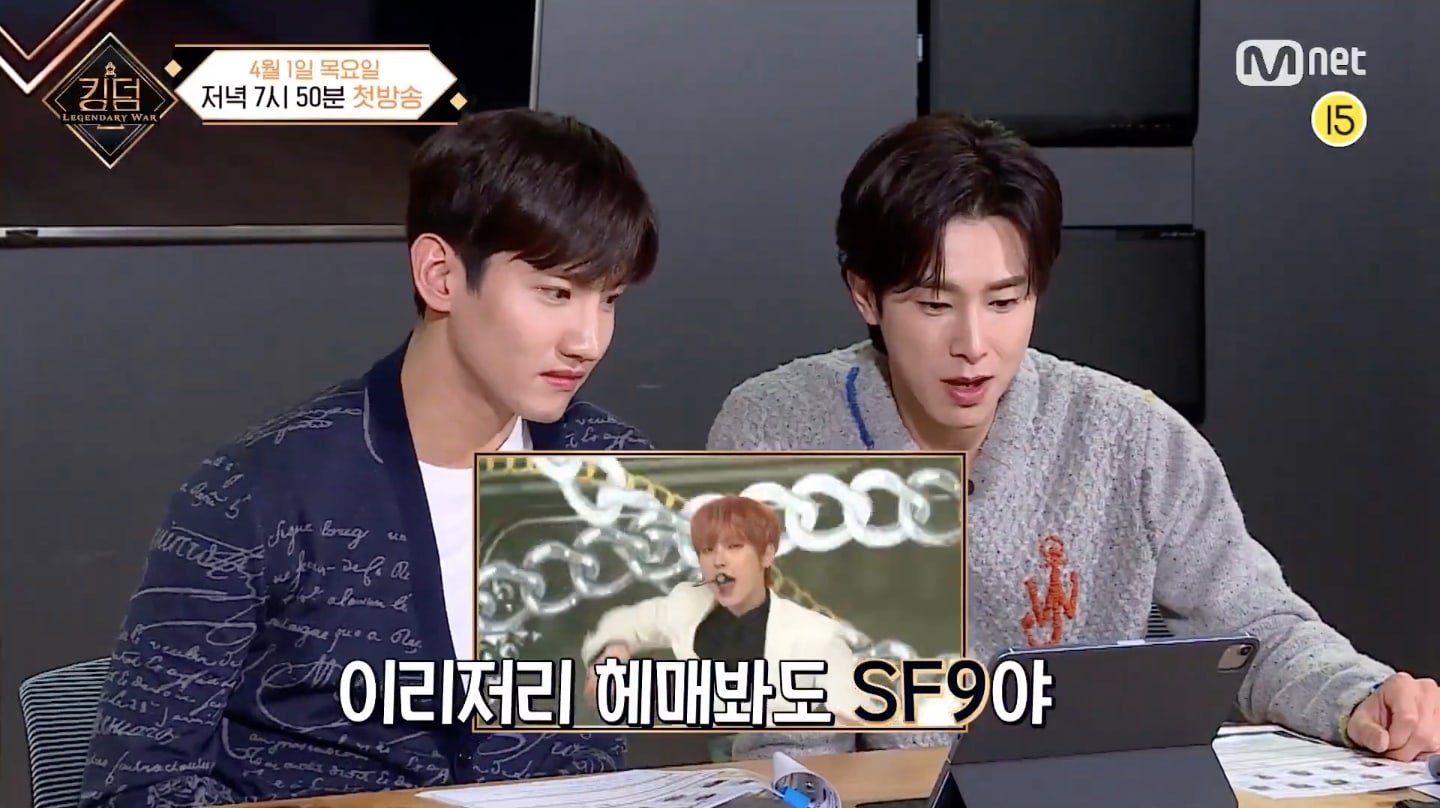 Before they move on to iKON’s “Rhythm Ta,” Yunho excitedly brings up the fact that back when he was a child actor, iKON’s Chanwoo played “Mini-Changmin” in TVXQ’s 2006 music video for “Balloons.”

“There’s going to be a familiar face that we’ll be happy to see,” Yunho says with a smile, and Changmin fondly agrees, “He grew up well.”

While watching iKON’s performance, Yunho praises them by remarking, “I know them to be a group who is exceptional at taking control of the stage.” Changmin agrees, “They’re talented performers who know how to play with the stage.” Yunho concludes by sharing, “I feel they’ll prepare iconic performances, so I’m excited and looking forward to [seeing them].” 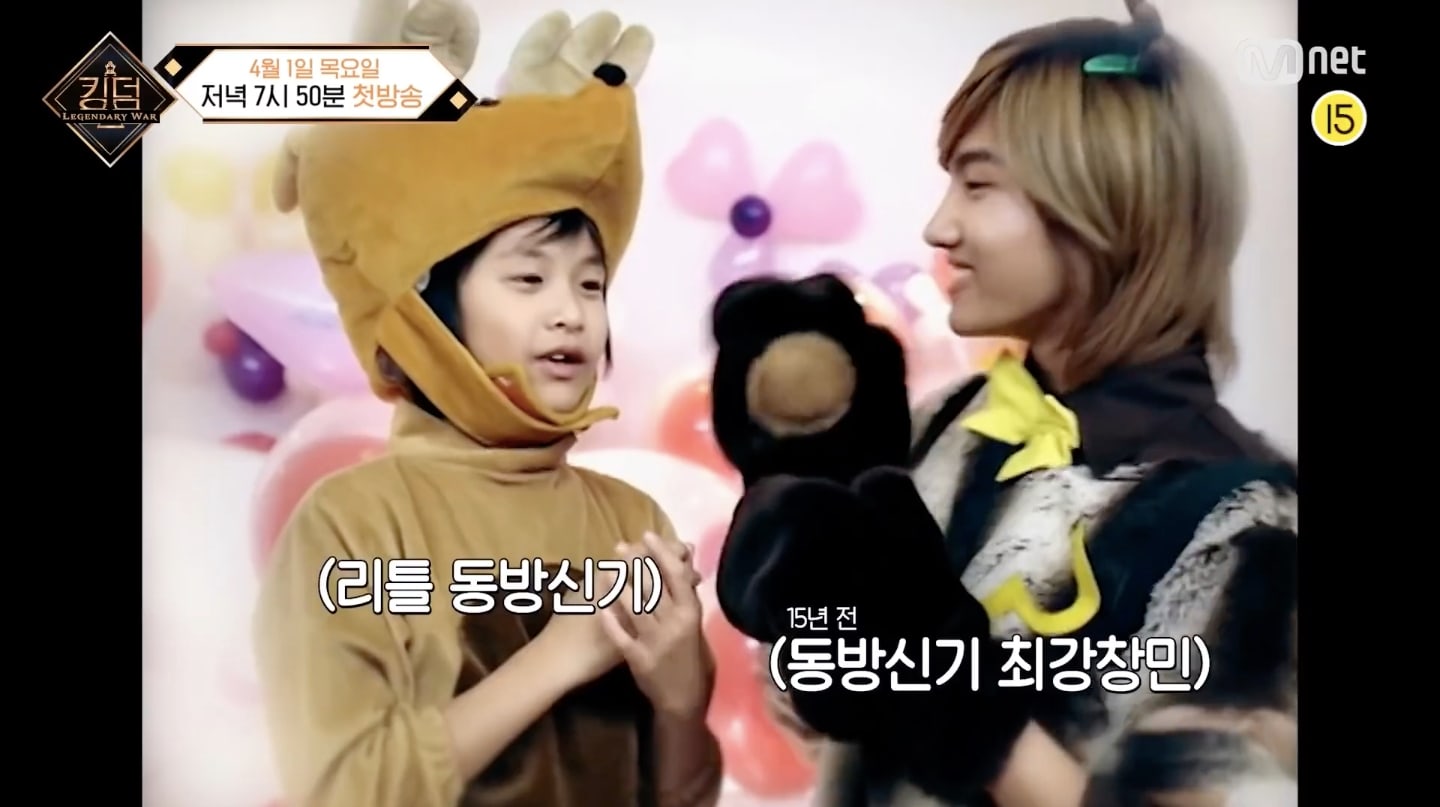 The final performance is BTOB’s “Missing You.” Referring to the fact that three of the four BTOB members who will be competing on “Kingdom” recently returned from the military, Changmin notes, “They’re the group that’s come the closest to feeling the emotions we’ve felt recently.”

Changmin later adds, “In contrast to the power of dominating the stage with dance, the voice also holds tremendous power in being able to move people’s hearts.” Yunho chimes in, “I hope they’ll focus and show us their inner potential.” 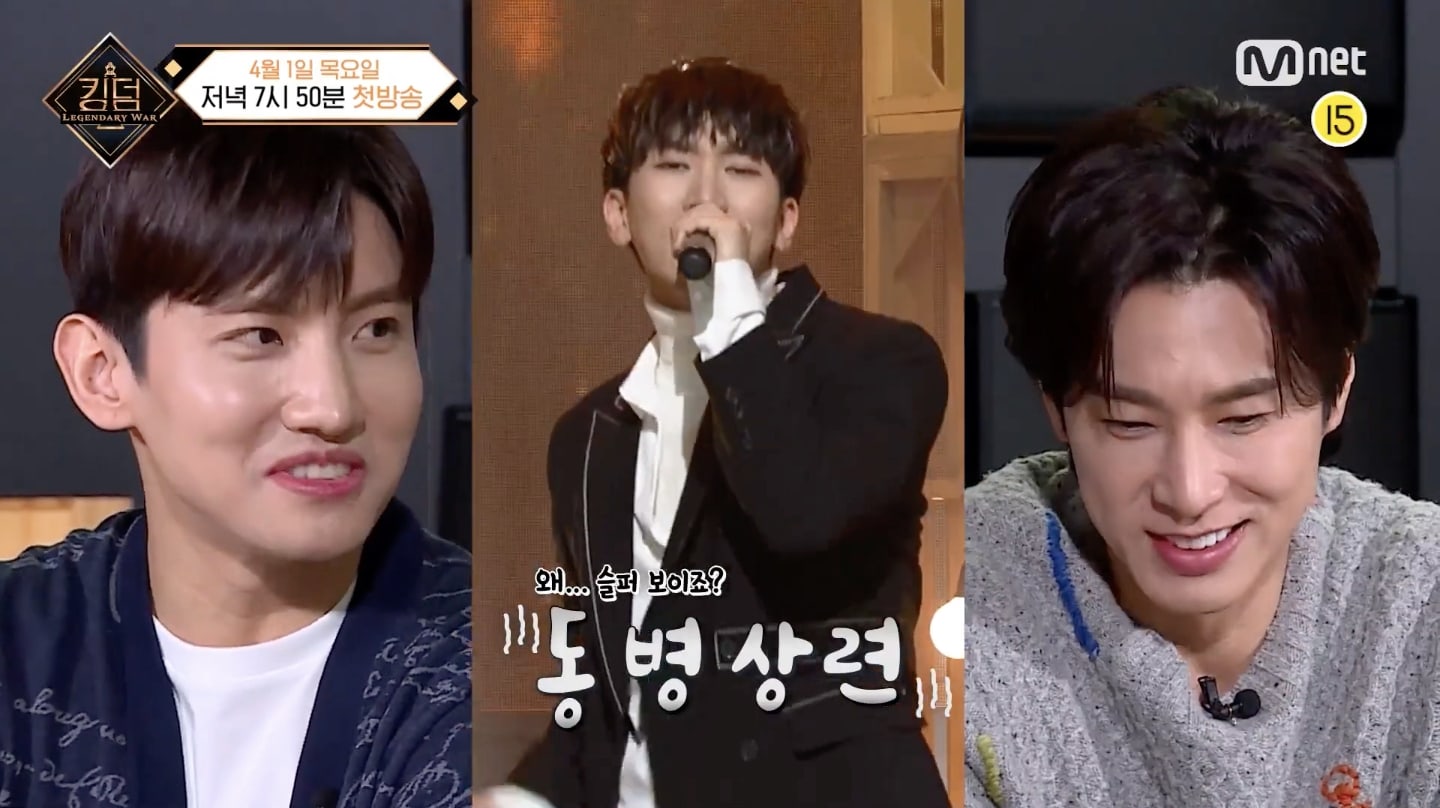 After watching all six groups’ performances, Yunho wraps up by saying, “I hope that by the end of this program, all the idols will be full of confidence.”

Changmin expresses his hope to become a source of strength for the competing groups, revealing, “Since we’ve become the MCs, I thought to myself, ‘How can I be of the most help to these groups?’ I feel like we can become like older brothers who listen to them and empathize with them more than anyone else.” He adds with a smile, “Let’s grab a drink together, guys.”

Yunho agrees, “Even if it isn’t shown on air, I think we’ll be able to give them good advice.” The two TVXQ members also playfully ask the production staff to refrain from “evil editing,” leading one member of the production team to promise, “We won’t do any of that.”

“Kingdom” will premiere on April 1 at 7:50 p.m. KST. In the meantime, check out the clip of TVXQ reacting to the competitors’ performances below!