The dancers of Mnet’s “Kingdom: Legendary War” sat down for some amusing one-on-one interviews!

In the upcoming third round of “Kingdom,” the six competing groups will split up into two teams of three groups each. ATEEZ, Stray Kids, and BTOB will form one team, while THE BOYZ, SF9, and iKON will form the other. The two teams will go head-to-head in vocal unit, rap unit, and dance unit performances that feature each team’s vocalists, rappers, and dancers collaborating with each other as intergroup units.

Ahead of the upcoming collaboration battle, “Kingdom” has released two clips of each dance unit attempting to get to know each other better through one-on-one chats in which they had to make eye contact for 120 seconds.

Stray Kids’ I.N and BTOB’s Peniel kick off the first clip, with Peniel playfully asking I.N if their leader Bang Chan—with whom Peniel is friends—has done anything to hurt his feelings. I.N jokingly replies, “Oh, there’s too many things. There’s so many that it’s hard to name them all.” However, he immediately clarifies, “I’m just kidding… but he keeps using my [facial] essence, so I wish he would buy his own.”

Just as their 120 seconds run out, Peniel expresses confusion as to what I.N means by “essence,” and it takes some explanation for him to realize that I.N is talking about the skin care product. Once he figures it out, Peniel says with a smile, “Okay, I’ll let [Bang Chan] know.” 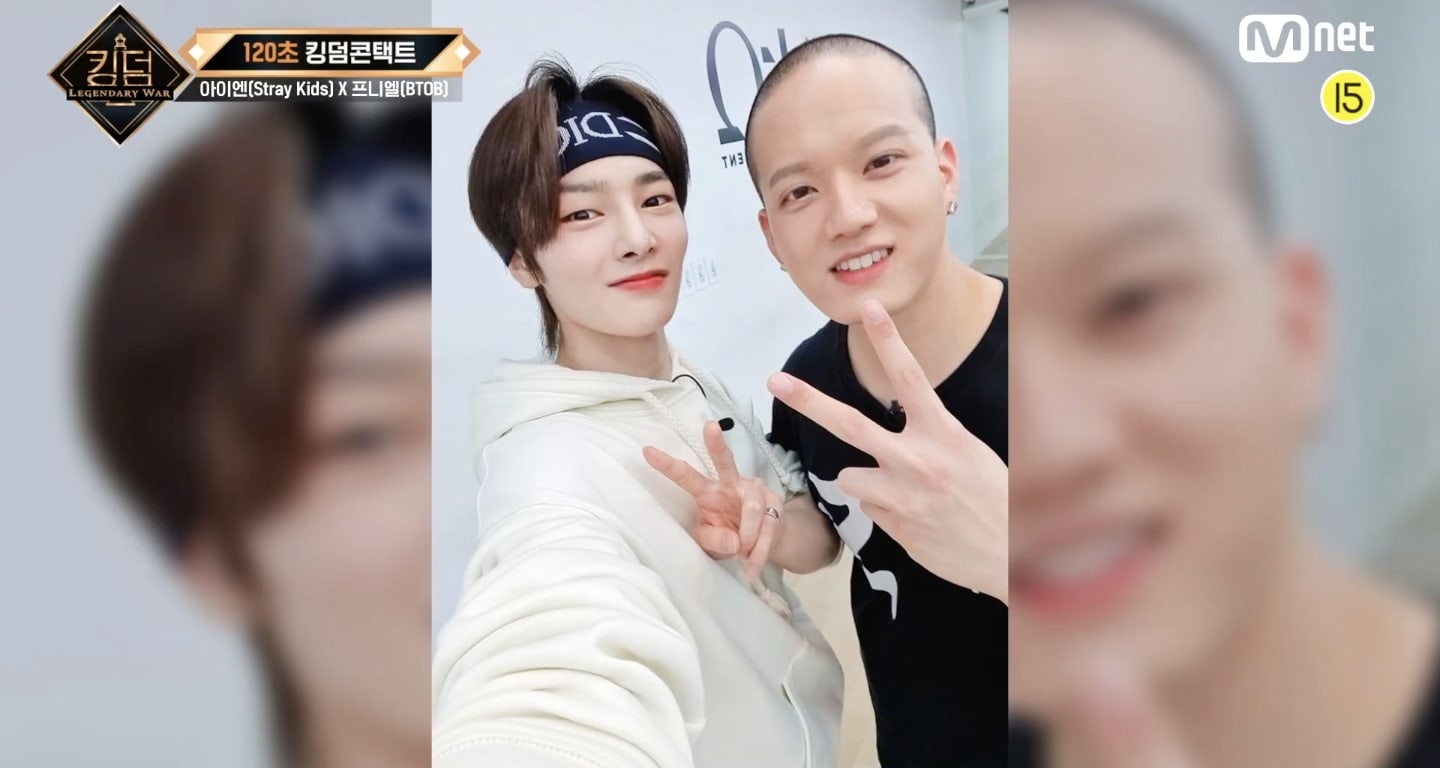 The next pair is ATEEZ’s Seonghwa and Stray Kids’ Lee Know, who happen to be the same age. After asking if there are a lot of other celebrities born in 1998, Seonghwa asks Lee Know to invite him along next time he hangs out with friends of the same age, and Lee Know agrees, “Yes, let’s hang out together. Let’s grab a meal and do stuff like that.”

Later, Seonghwa mentions that he’s watched fancams of Lee Know performing “God’s Menu,” which takes the other idol by surprise. Lee Know then asks Seonghwa to name his favorite Stray Kids song, and when Seonghwa chooses “Hellevator,” Lee Know urges him to sing a snippet. 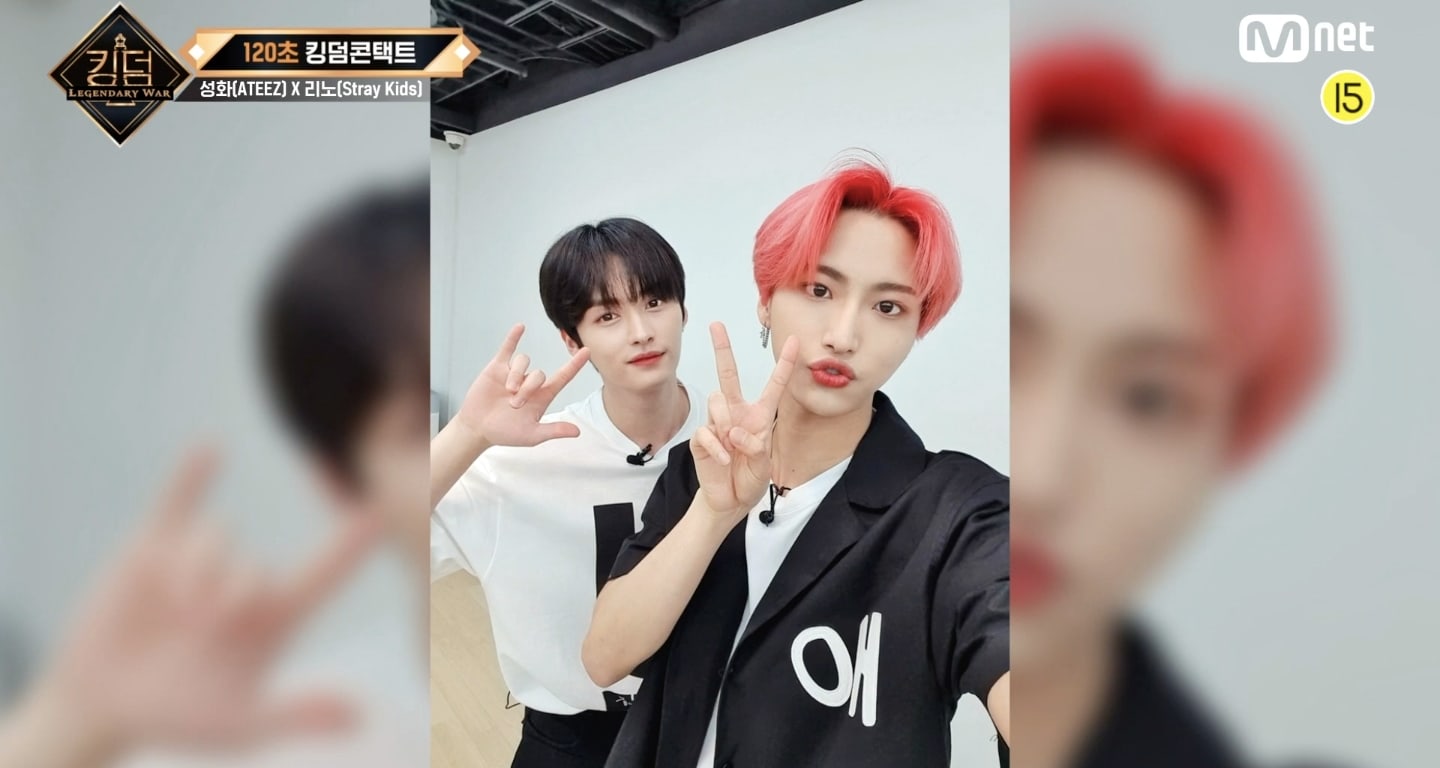 The final pair of the first team is ATEEZ’s Wooyoung and Stray Kids’ Felix. Wooyoung, who is famously close friends with Stray Kids’ Changbin, jokingly asks Felix if Changbin has been bothering him these days, and Felix jokes back that he’s surviving.

Wooyoung later goes on to ask Felix what his favorite ATEEZ song is. Felix cracks Wooyoung up by starting to sing “Fireworks (I’m the One),” and Wooyoung responds by playfully breaking out into the chorus of “Hellevator.” 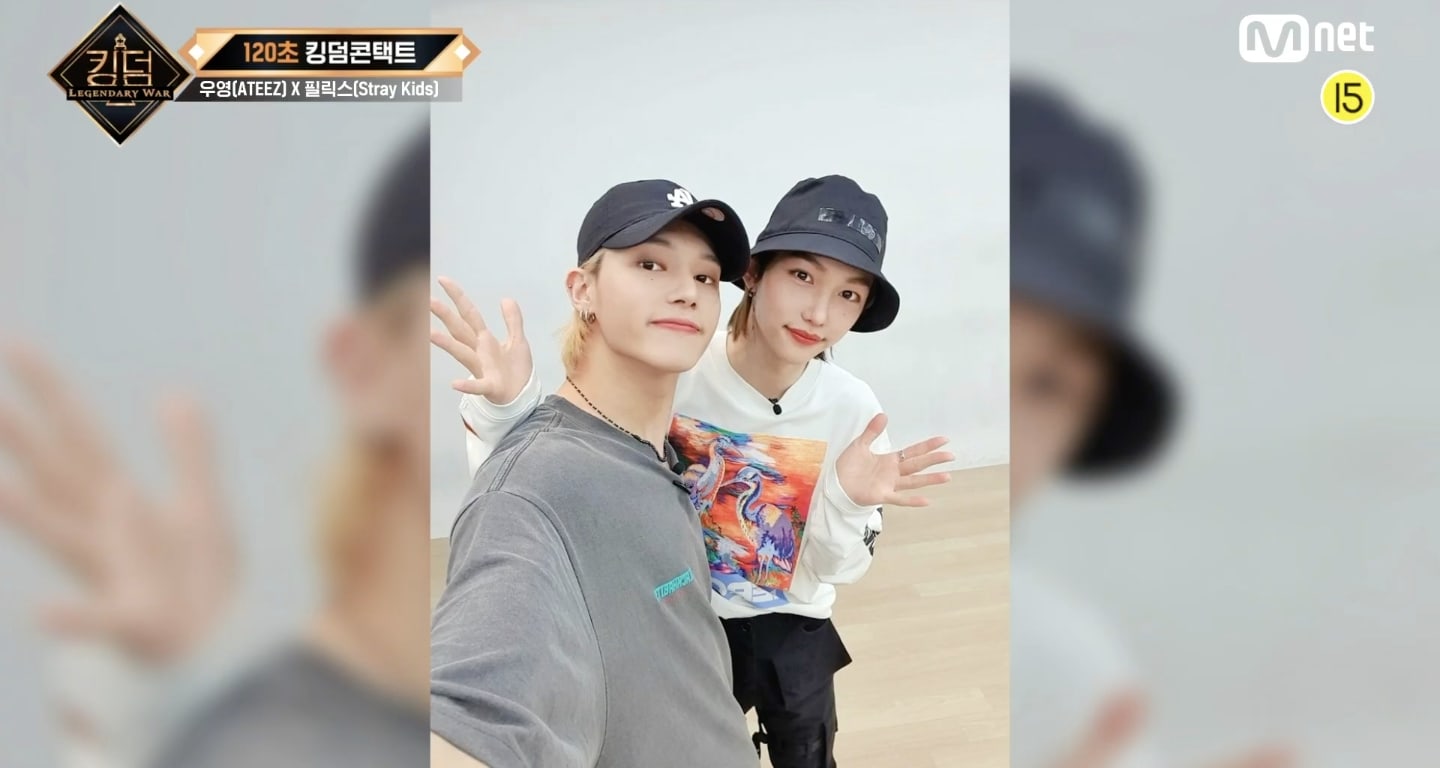 Over on the other team, iKON’s Donghyuk and SF9’s Taeyang chat about their breakfast and blood types, eventually learning that they share the same blood type. After two minutes of adorably awkward conversation, Taeyang asks Donghyuk what his first impression of him was—but immediately after he asks the question, their time runs out. 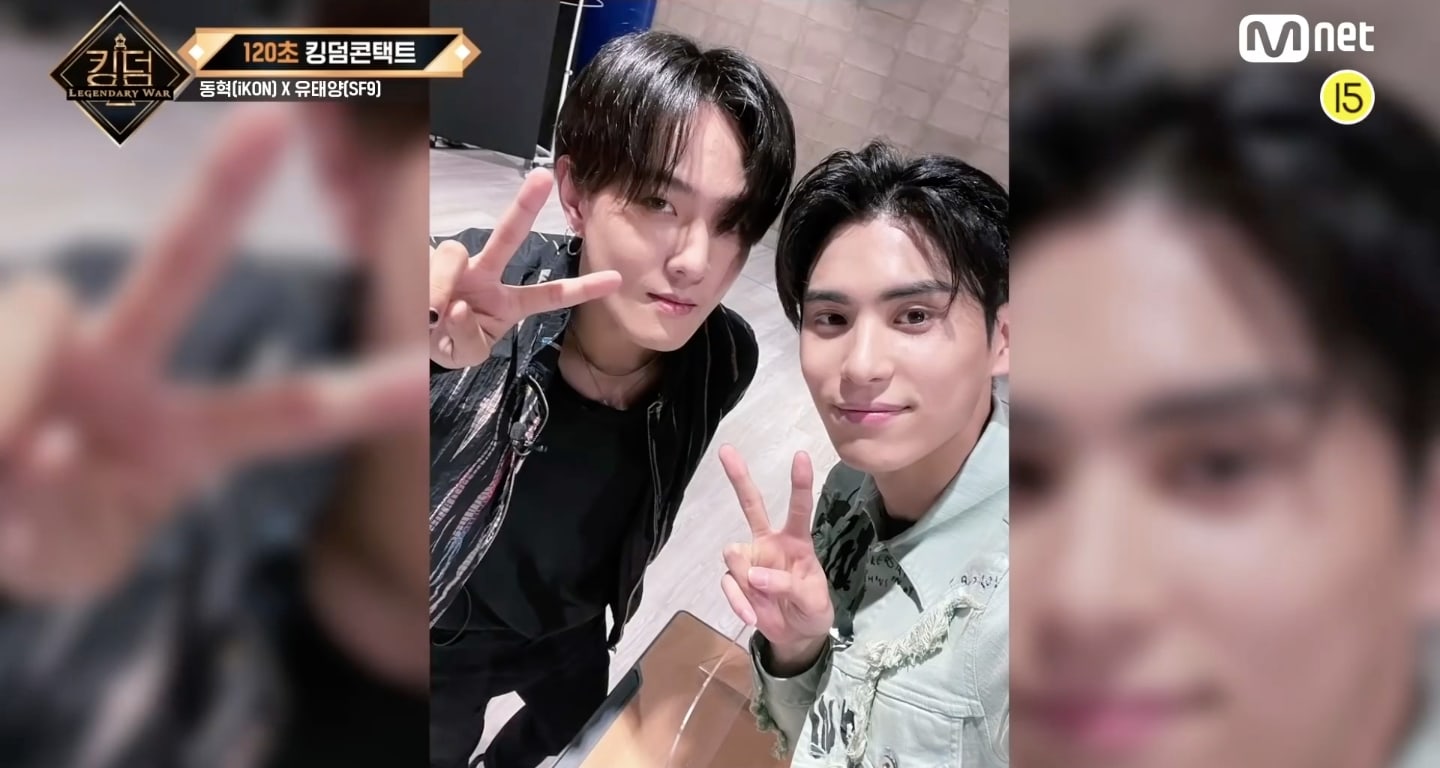 Next, Donghyuk sits down with THE BOYZ’s Juyeon, who kicks things off by telling him that he’s a big fan and that he watched Donghyuk from his pre-debut survival show days. Donghyuk replies that he also watched Juyeon on “Road to Kingdom,” so he knew the younger idol was a dancer. “I thought you were really cool,” he adds, and Juyeon responds, “It’s an honor to be able to collaborate with you for this round.”

Donghyuk asks Juyeon when he first wanted to become a singer, and Juyeon reveals that it was his first year of middle school. Donghyuk goes on to ask Juyeon if he’s happy with his chosen profession, to which Juyeon replies, “I think it suits me well.” Juyeon then asks Donghyuk the same question, and the iKON member responds, “I’m happy. Because I managed to achieve the goal that I wanted to make happen ever since I was little.” 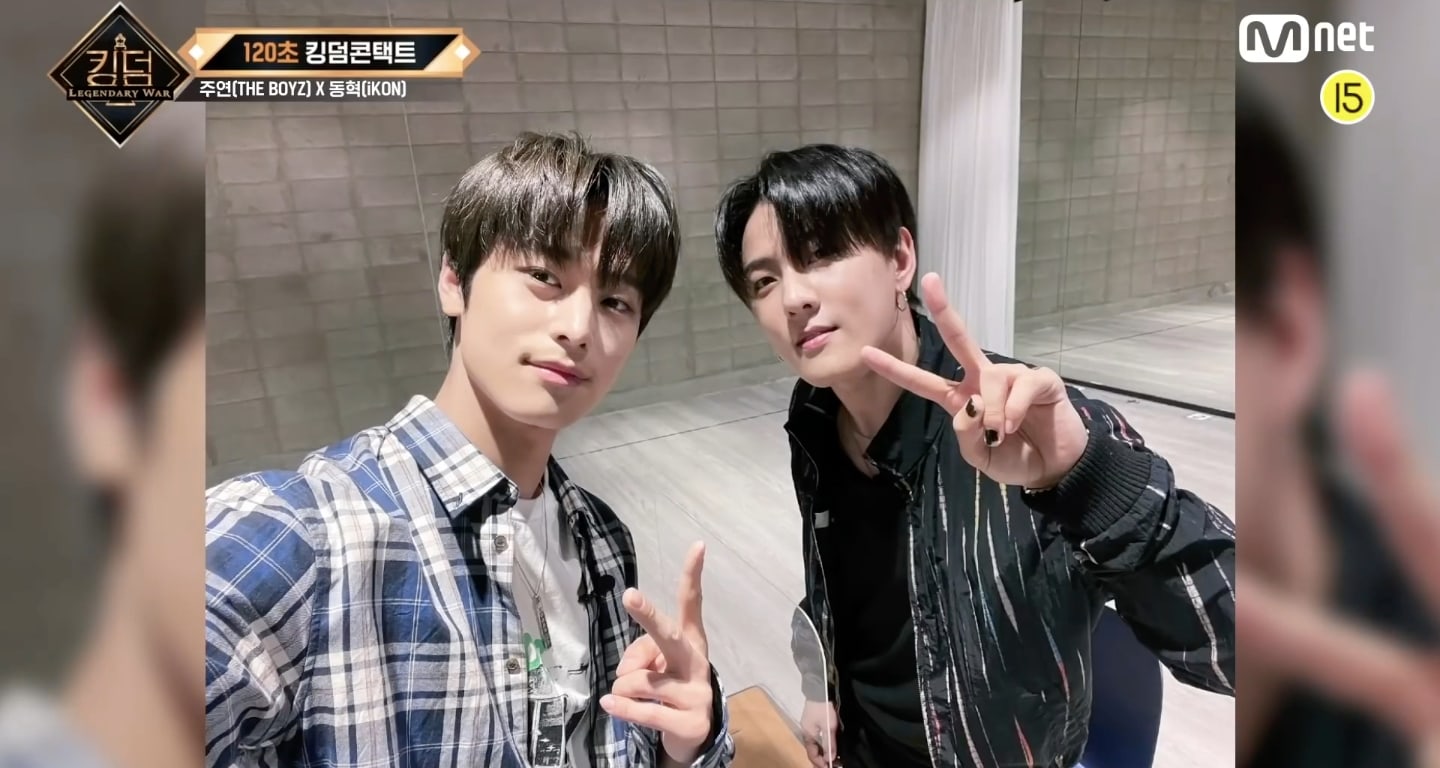 Finally, Juyeon and Taeyang wrap up the video with their own one-on-one interview. Juyeon asks Taeyang what he thinks of “Kingdom” so far, and Taeyang replies, “‘Kingdom’ is a first for me, but you’ve been doing this show since ‘Road to Kingdom.’ Honestly, when I watched you on that show, I thought, ‘Wow, that must be so hard.'” He went on with a laugh, “But now that I’m actually doing the show myself, it turned out to be way, way, way harder than I’d thought. So I realized that you guys [THE BOYZ] are truly amazing.”

Juyeon goes on to praise Taeyang for looking “so cool” in SF9’s cover performance of THE BOYZ’s “The Stealer,” to which Taeyang responds with his own praise of how cool Juyeon looked performing the original version of the song. 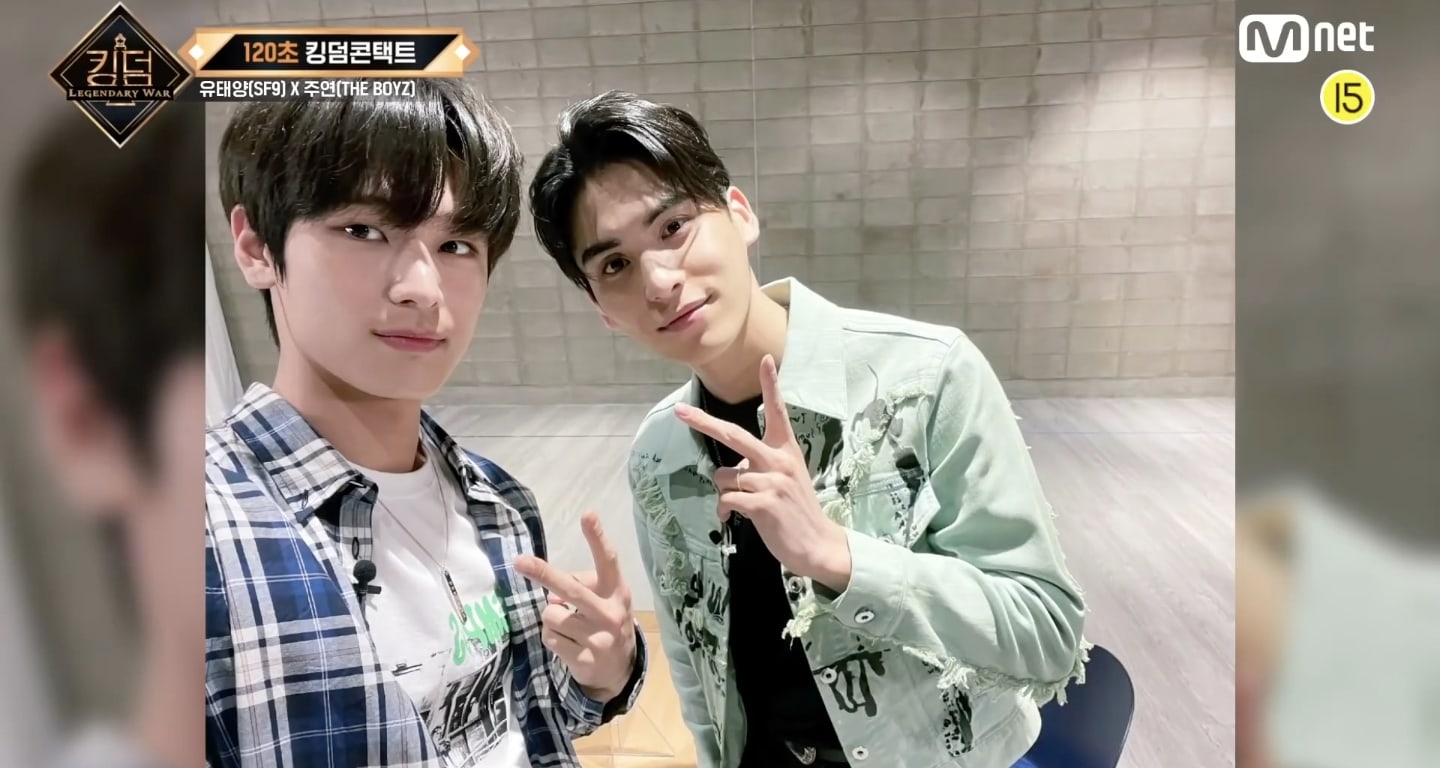 The collaboration unit battle will kick off on the next episode of “Kingdom,” which airs on May 13 at 7:50 p.m. KST. (You can check out a preview for the upcoming episode here.)

In the meantime, watch the full clips of the two dance units’ one-on-one interviews below!

Catch up on previous episodes of “Kingdom” with subtitles below: