Episode 9 Of “Kingdom”: 4 Performances That Left Us Wanting For More

On this ninth week of “Kingdom: Legendary War,” we have the final performances of the third round, which are also basically the last performances before the live finale. This also means this is the penultimate episode, and we are right on the doorstep of the finale! All judging, votes, and personal preferences aside, these six groups have delivered jaw-dropping performances week after week, and each and every last one of these boys deserve all the love and applause!

So before we bring on the finale (which will no doubt be explosive), here are the four great performances from this week that made us just a little sadder knowing that the show will be ending soon:

Warning: Partial results for the third round towards the bottom.

For this “No Limits” round, the four members of BTOB decided to choose a song that their fans, Melodies, had been yearning to see them perform — “Blue Moon.” This is a jazzy song that was penned by Minhyuk himself, and to give the stage an even more “jazz bar” vibe, Changsub even recruited his comrades from his military band days to perform live. 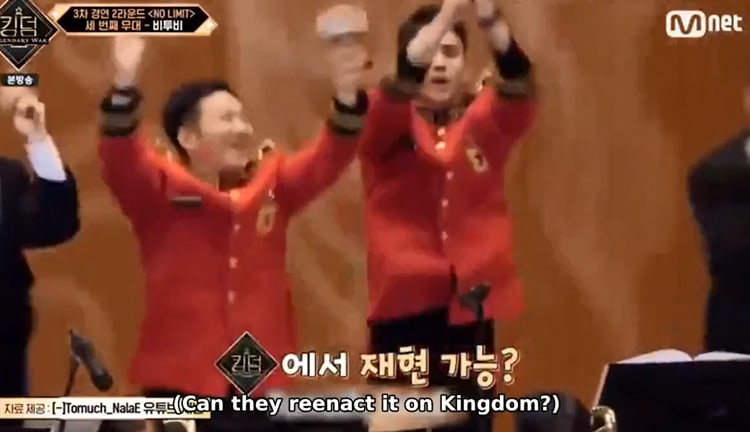 This is a very blurry screencap, but basically, that’s a very hyper Changsub and SHINee‘s Key while in the military band! So adorable!

Referencing “La La Land,” the performance unfolded as if they were on-set filming a movie, with the boys taking on roles like actors and staff members. (G)I-DLE’s Miyeon joined them as their lead actress, and there was even a hilarious “behind-the-scenes” part at the very end of the performance that revealed Miyeon’s true love interest.

Everyone in the studio held their breath during this “tense” moment.

The whole performance was sexy, jazzy, theatrical, and with top-notch live performances. And really, it doesn’t get any more BTOB than that!

iKON found Eunkwang to be extra sexy this performance and thus decided to mimic him and show off their arms.

“Answer: Ode To Joy” by ATEEZ

The boys of ATEEZ also chose a song that their fans, ATINYs, had been wanting them to perform, and that was “Answer.” This was their encore stage at their last concert before COVID hit, and was thus the last song they were able to perform in front of their fans. This song held a special place in their hearts, and they wanted to make the performance a love letter of sorts to their fans.

With that concept in mind, ATEEZ put in little easter eggs in the performance which their fans no doubt enjoyed, like similar scenes from their MVs, as well as the hourglass that’s been used to tie the ATEEZ universe together. 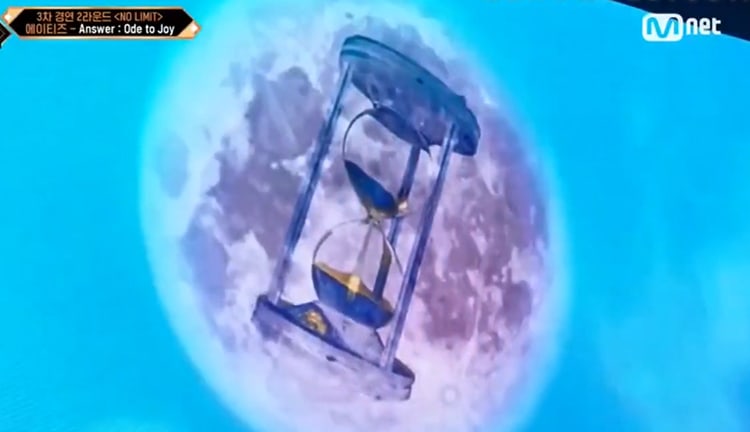 They also incorporated Beethoven’s “Ode To Joy” into their performance. When the quartet La Poem came in with their operatic vocals, the whole stage felt like it was amped right up to eleven. And if you were slack-jawed and eyes-wide while watching this, then I can tell you, you weren’t alone! 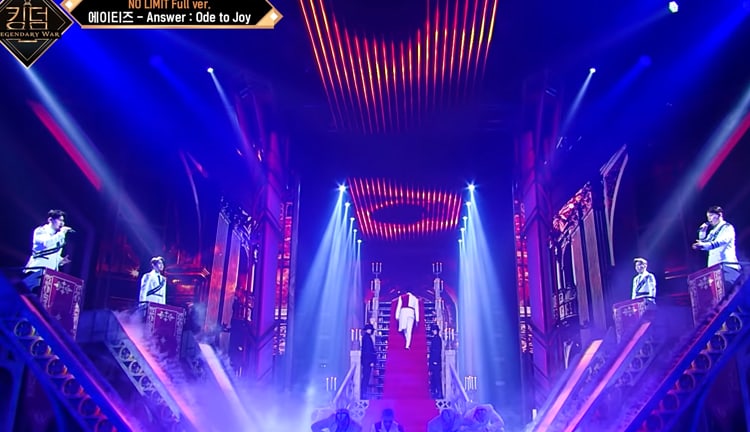 The four members of La Poem on their podiums. 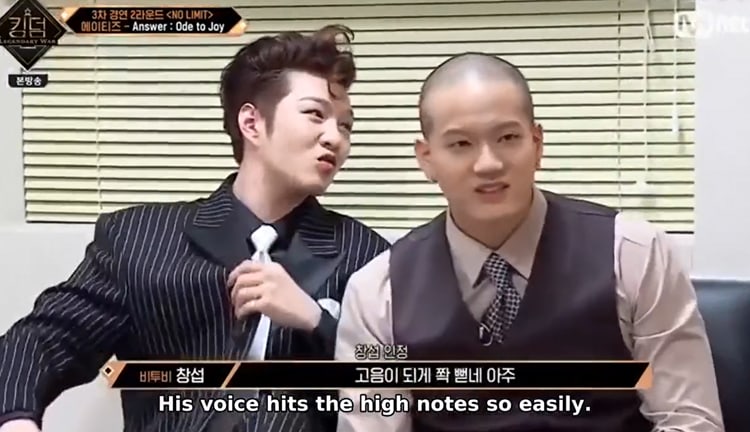 We interrupt your regular broadcast for a special entry of “iKON’s Road to Becoming Insiders” (part 3):

The friendship between iKON and SF9 is still going as strong as ever! The iKON boys even left their waiting room just to go cheer SF9 on before they took their stage! *proud mama look*

Back to your regular broadcast:

When SF9 gathered together to discuss their song choices, they eventually decided on continuing down the mature and sexy path. This prompted a heavily bleeped conversation, and one Chani looking adorably lost and helpless in the middle of it all.

Speaking of Chani, he was tasked with the solo opening part for their performance of “Move,” but found himself having a difficult time with the sensual moves. 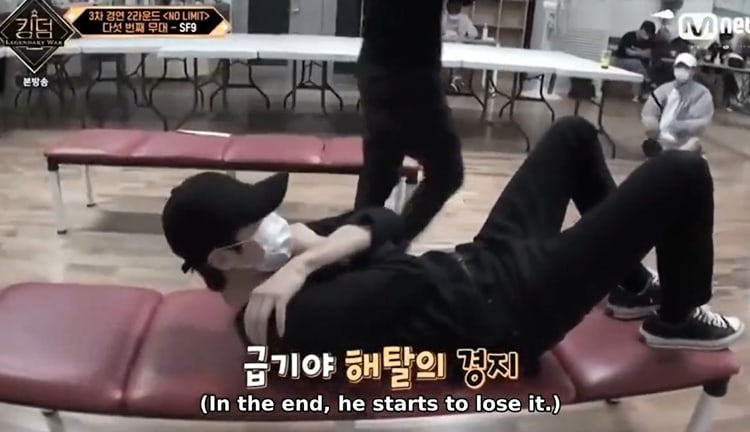 Seeking advice, he thus gave a call to OG-“Mover” Taemin (have a safe enlistment, Taemin!). And after Taemin got over his surprise that the group chose his song, the sunbae went on to give Chani the great pep talk he needed.

And he nailed it!

The group really made a great choice by choosing “Move.” It really accentuated all their strengths, including their long limbs and the masculine sexiness that they exude, and they performed the heck out of it. There was something restrained about their movements, which made it all the more sensual, and they also reinterpreted the original choreography well. Bottom line is, everyone should really check on their fellow Fantasies and make sure they’ve not passed out from that performance!

“Monster (Stormborn)” by THE BOYZ

THE BOYZ was the final group to perform for this third round, and they closed the night with a bang! They chose to perform EXO’s “Monster,” with the idea that they wanted to show the world what a terrifying force they could be. A big highlight of their performance was how in-sync they were, and it was quite exhilarating to watch such a large group of people (including the backup dancers and minus one Younghoon, who sat out because of an injury) dancing in total synchronicity!

The musical arrangement was particularly interesting, with high-pitched sounding strings splashed throughout which added to the tense atmosphere. And when things came to a boiling point, a freaking snake appeared on stage and spat Sunwoo out. Okay, so it was more like he walked out of the snake’s mouth, but you get the idea.

After things were all done and dusted and the boys walked off the stage, Sang Yeon suddenly burst into tears. But contrary to the preview’s misdirection, it wasn’t because of anything bad:

The scores for group votes and experts’ evaluations are as follow: 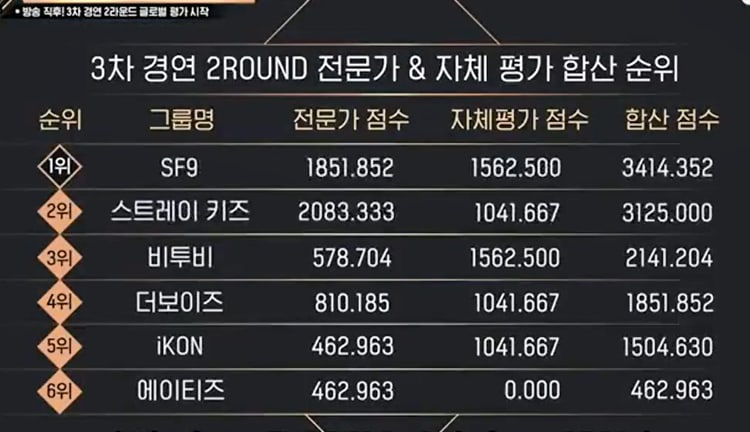 From first to sixth, it’s SF9, Stray Kids, BTOB, THE BOYZ, iKON, and ATEEZ. The second column shows the experts’ score, the third shows scores from the group votes (if you’re wondering, they received, from top to bottom, 3, 2, 3, 2, 2, and 0 votes, respectively), and the final column is the total scores as of airing.

Which performance have you been watching on repeat the most? And on a scale of 1 to 10, how pumped are you for the finale? Let us know in the comments below!

Belinda_C is sad that the finale is right around the corner. She’ll miss all these epic performances as well as the blossoming bromances.