Gaon has released its chart rankings for the month September and the week of September 26 to October 2. 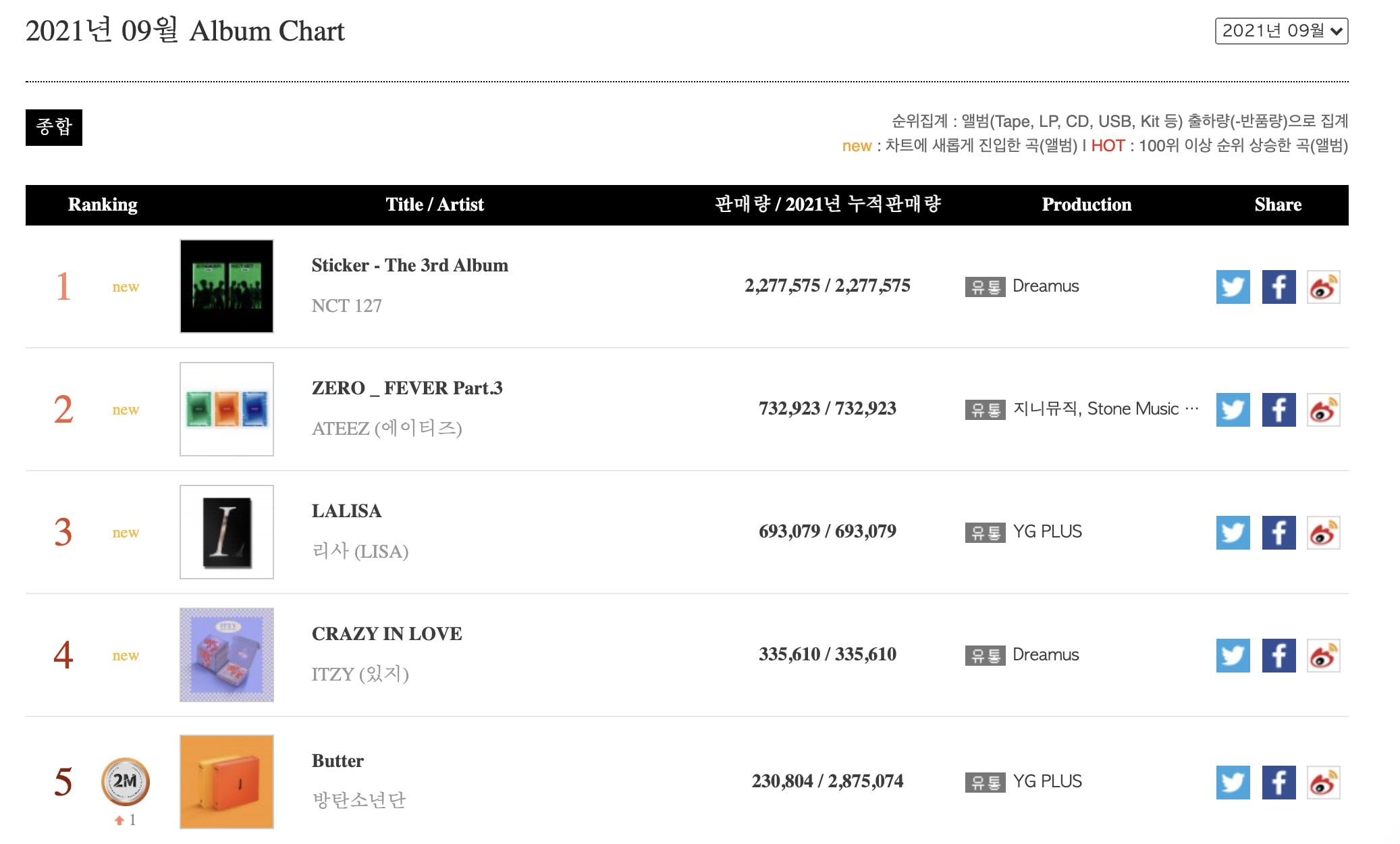 NCT 127’s “Sticker” sold over 2 million units to top the album chart for the month of September. In second place was ATEEZ’s “ZERO: FEVER Part.3,” followed by BLACKPINK’s Lisa’s “LALISA” at No. 3. ITZY’s “CRAZY IN LOVE” came in fourth, while BTS’s “Butter” was the only holdover from August at No. 5. 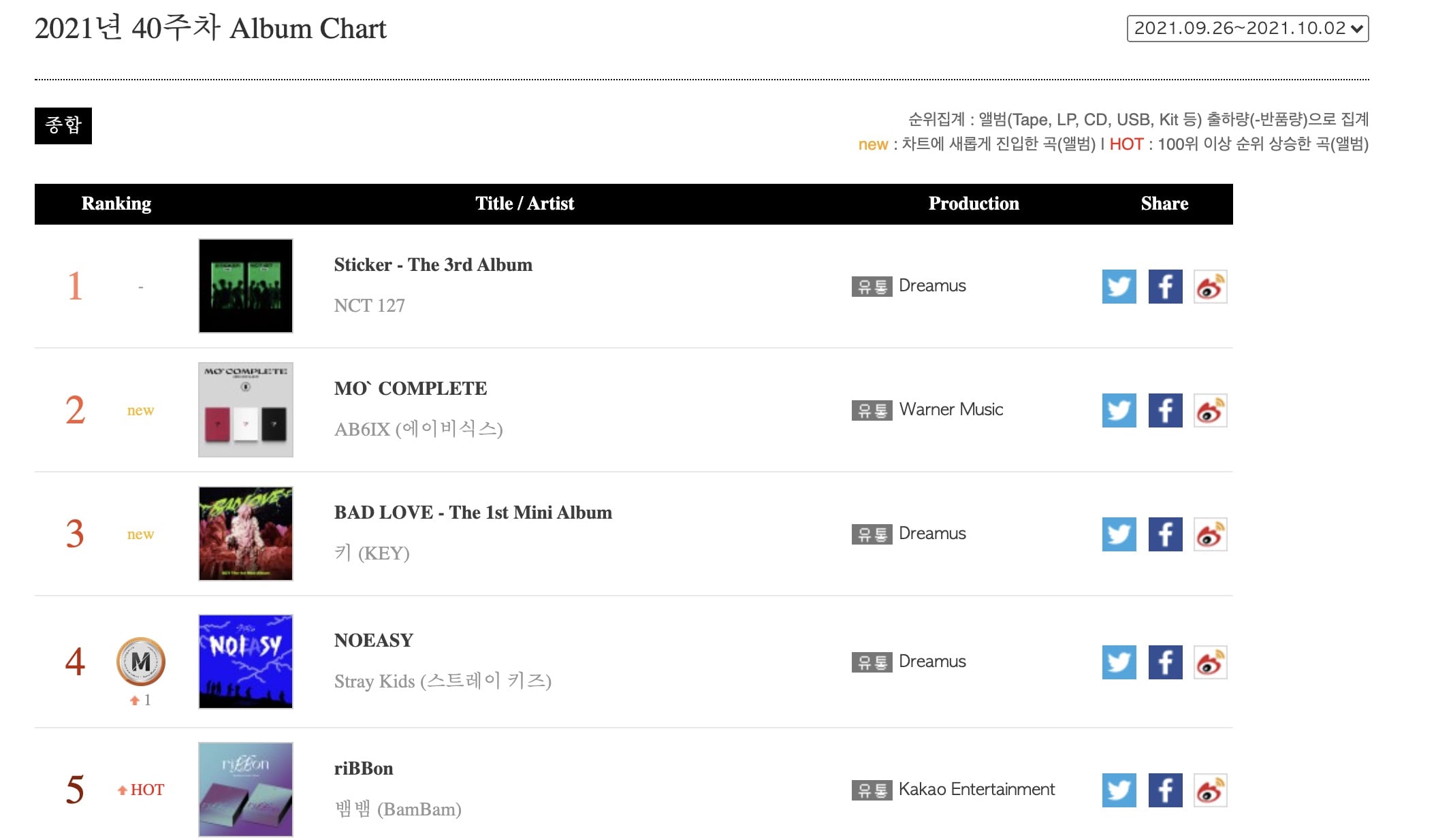 In addition to topping the September album chart, NCT 127’s “Sticker” topped the weekly album chart for the third week in a row. AB6IX’s “MO’ COMPLETE” and SHINee’s Key’s “BAD LOVE” entered the album chart for the first time at No. 2 and No. 3, while Stray Kids’ “NOEASY” rose one position to No. 4 and GOT7’s BamBam’s “riBBon” rose up the rankings to round out the top five. 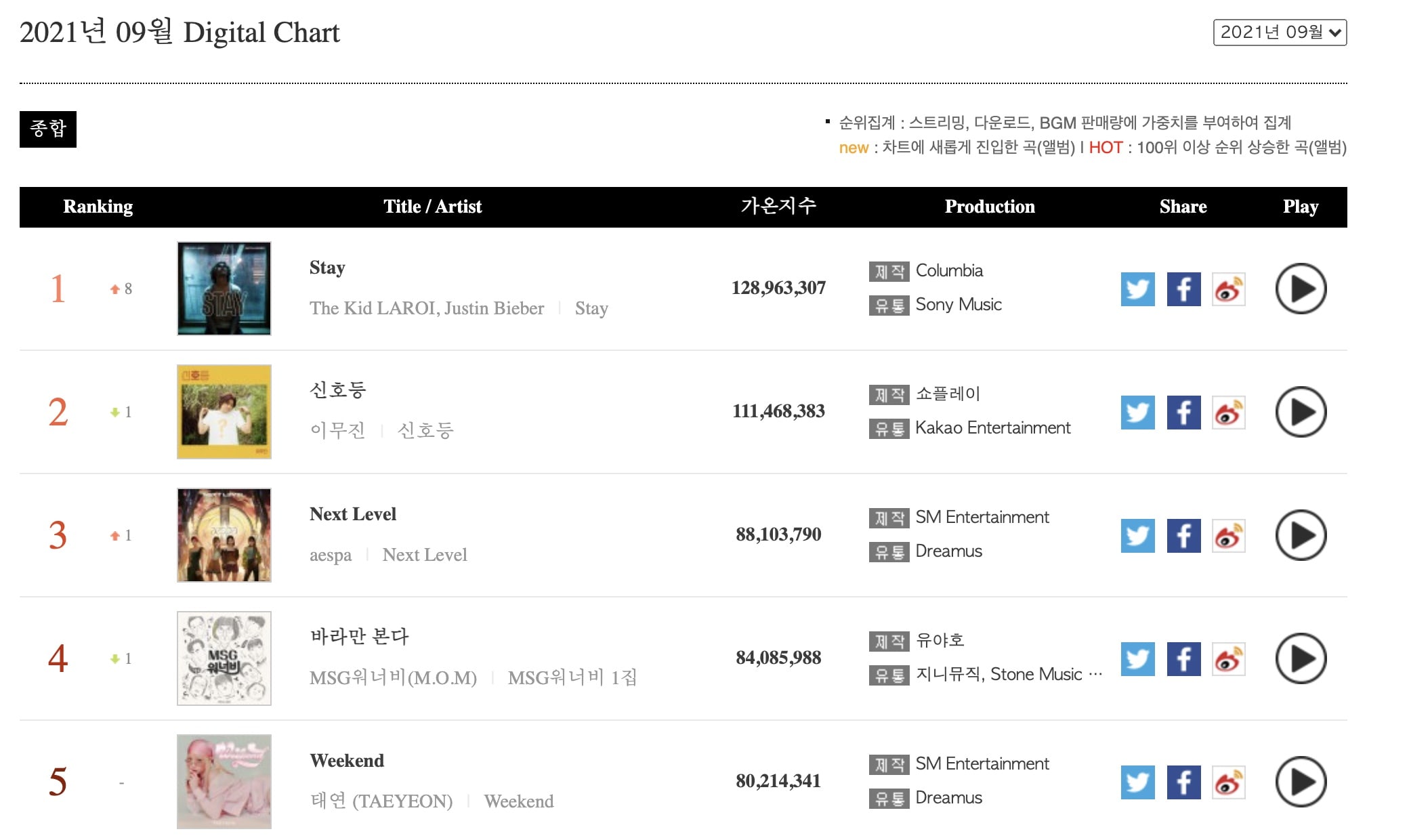 The Kid LAROI and Justin Bieber’s hit collaboration, “Stay,” topped the digital chart for the month of September. The rest of the top five are similar to last month, with Lee Mujin’s “Traffic Light” at No. 2, aespa’s “Next Level” at No. 3, MSG Wannabe (M.O.M)’s “Foolish Love” at No. 4, and Taeyeon’s “Weekend” at No. 5. 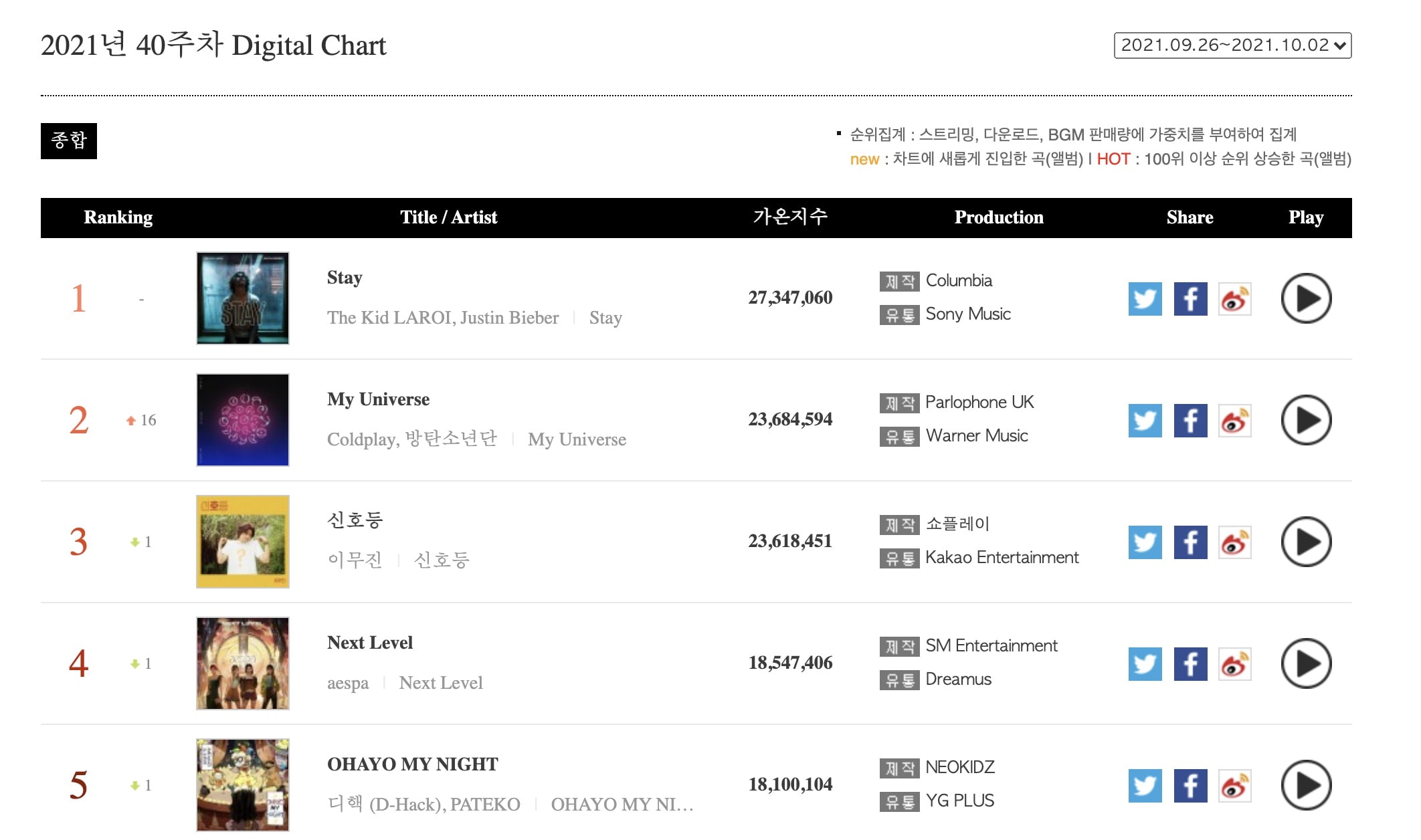 “Stay” continues to top the digital chart for the week of September 26 to October 2. The only new entry in the top five is BTS and Coldplay’s “My Universe” at No. 2, and “Traffic Light,” “Next Level,” and D-Hack and PATEKO’s “OHAYO MY NIGHT” each dropped one position from last week to hit No. 3, No. 4, and No. 5 respectively. 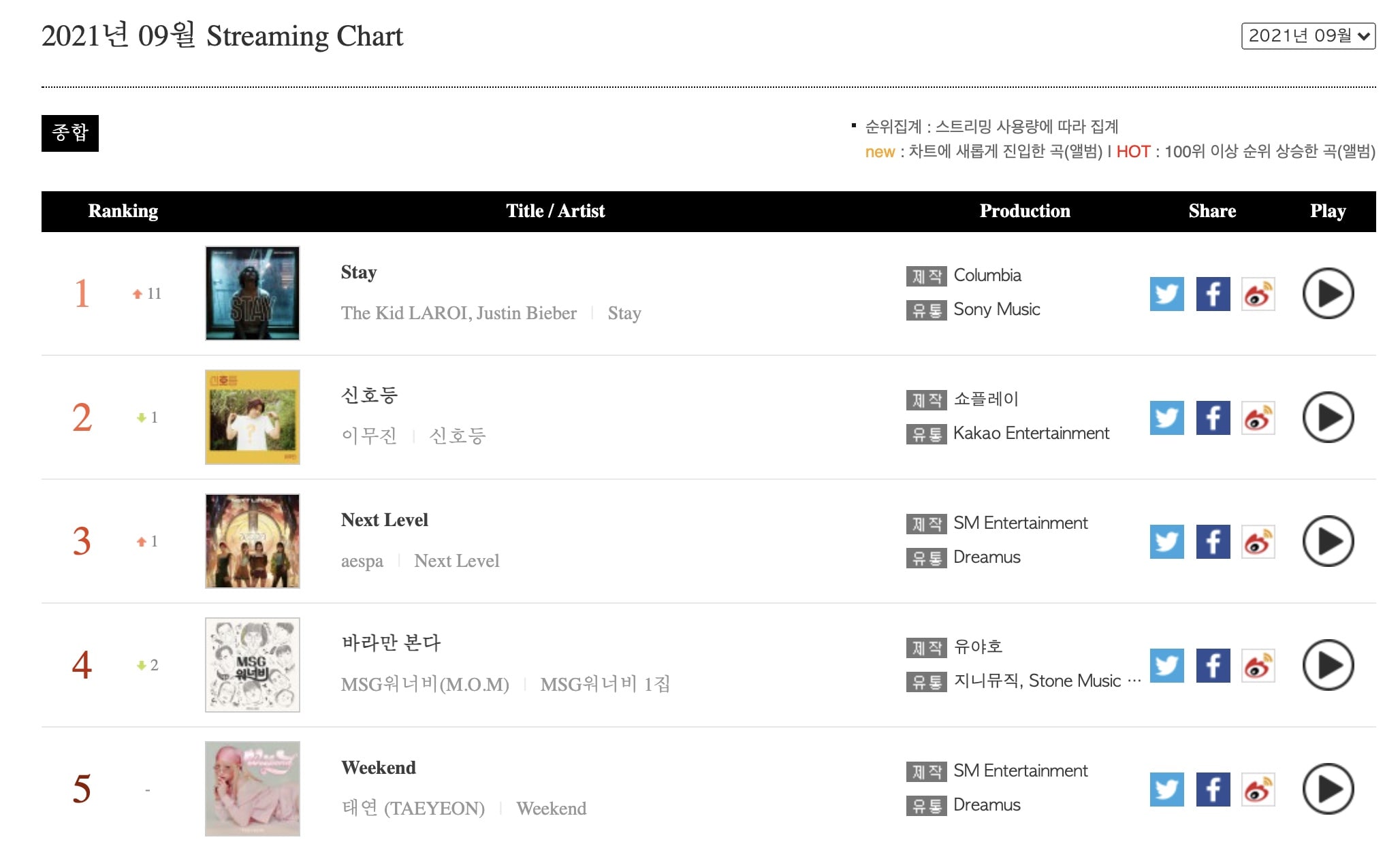 The monthly streaming chart is identical to the monthly digital chart in September. 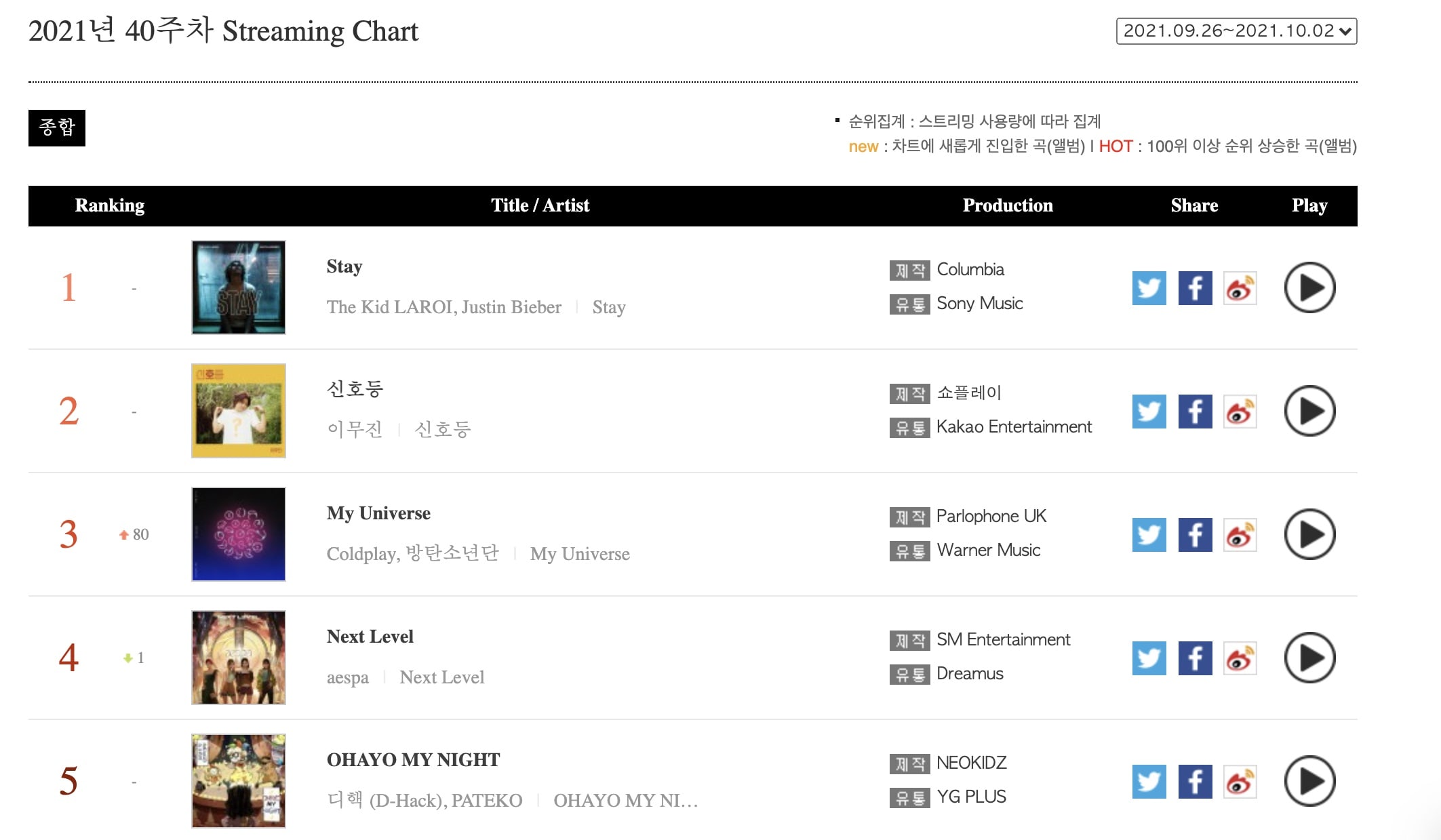 The streaming chart for the week of September 26 to October 2 is similar to the digital chart for the same week, except “Traffic Light” and “My Universe” switched places at No. 2 and No. 3. 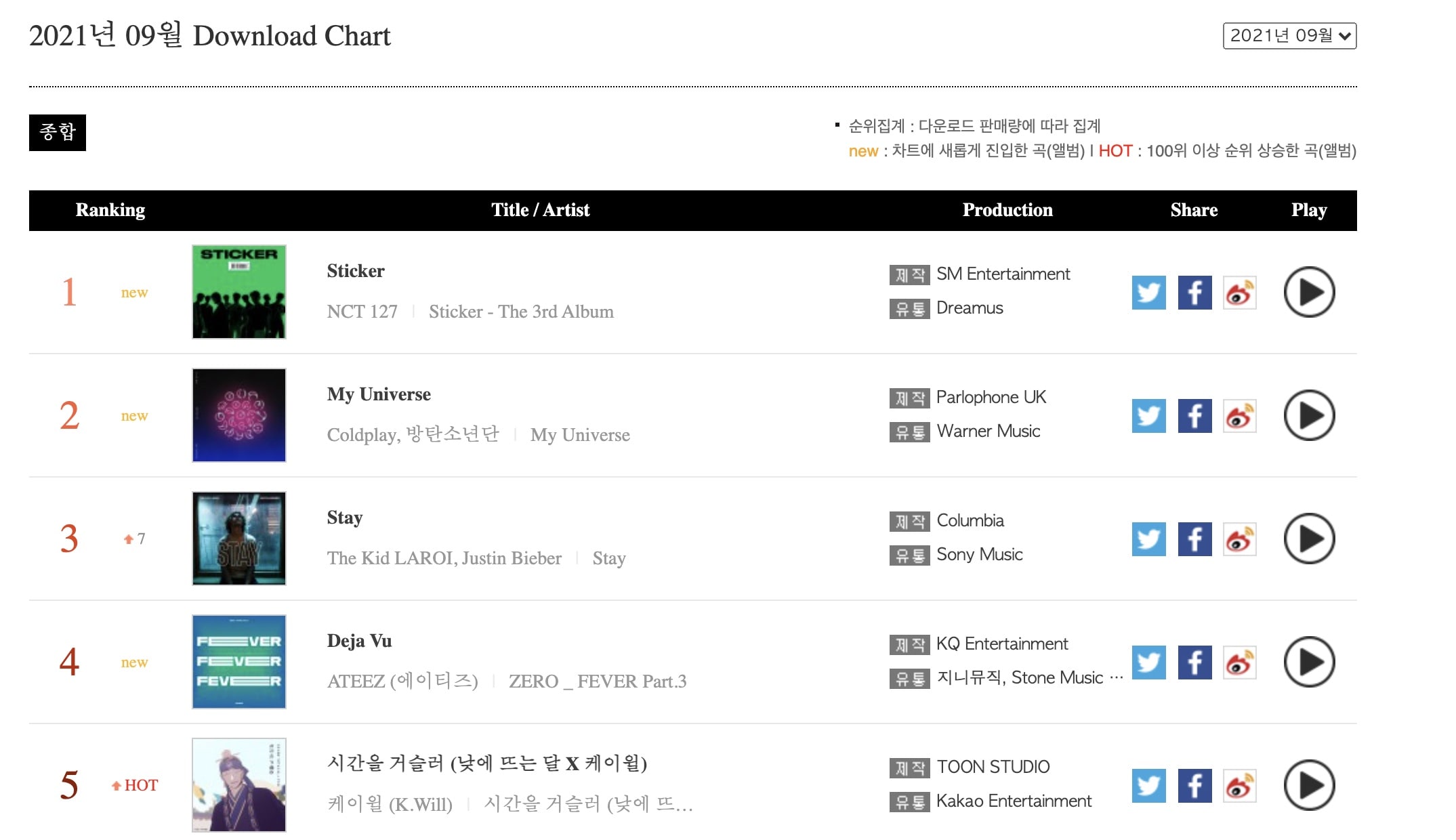 Compared to last month, there are three new entries in the monthly download chart for September: NCT 127’s “Sticker,” BTS and Coldplay’s “My Universe,” and ATEEZ’s “Deja Vu.” “Stay” also entered the top five for the first time, while K.Will’s “Back in Time” OST shot up the rankings to reach No. 5. 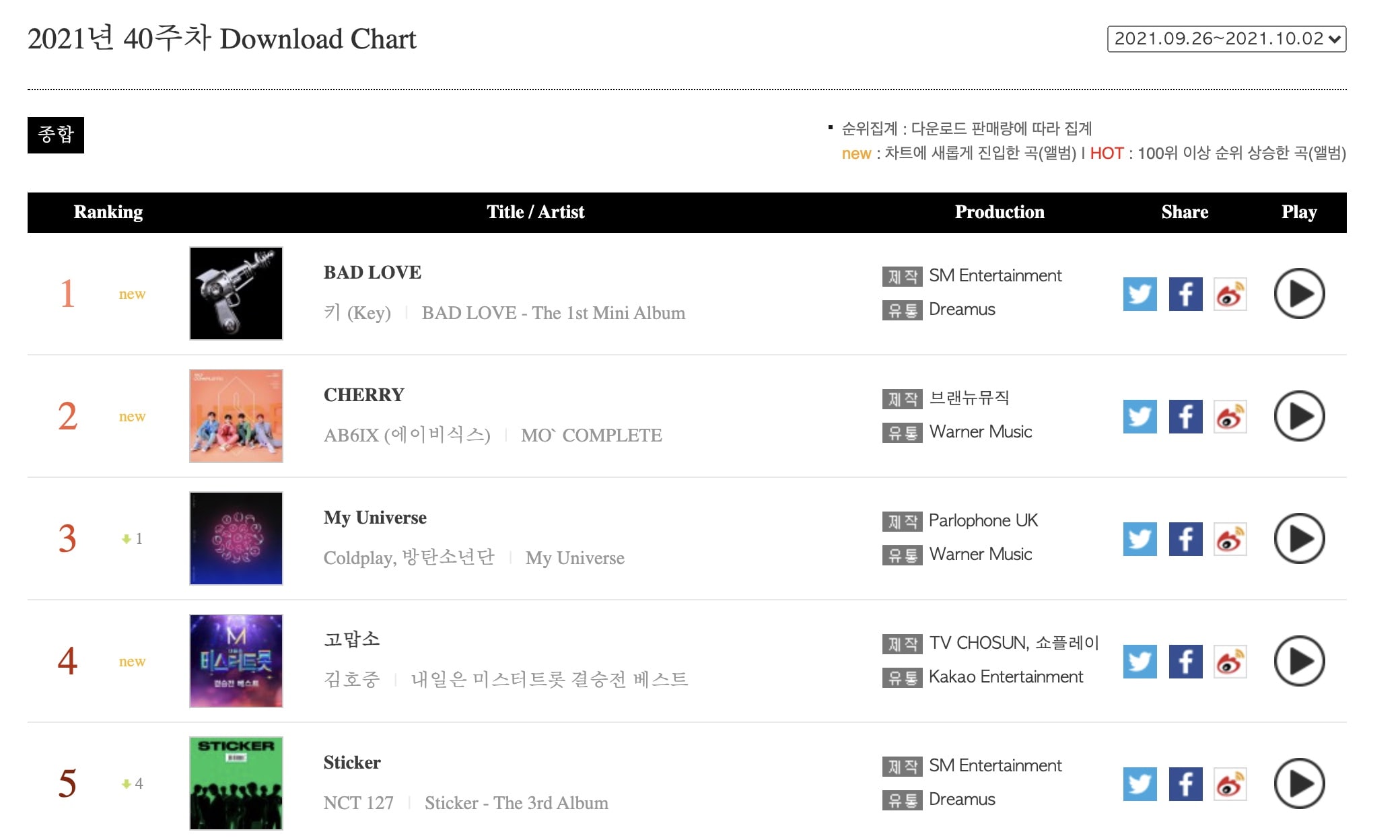 Three songs entered the download chart for the first time in the week of September 26 to October 2: Key’s “BAD LOVE,” AB6IX’s “CHERRY,” and Kim Ho Joong’s “Thank You” from the “Mister Trot” finale. Rounding out the top five and the only holdovers from last week are “My Universe” at No. 3 and “Sticker” at No. 5. 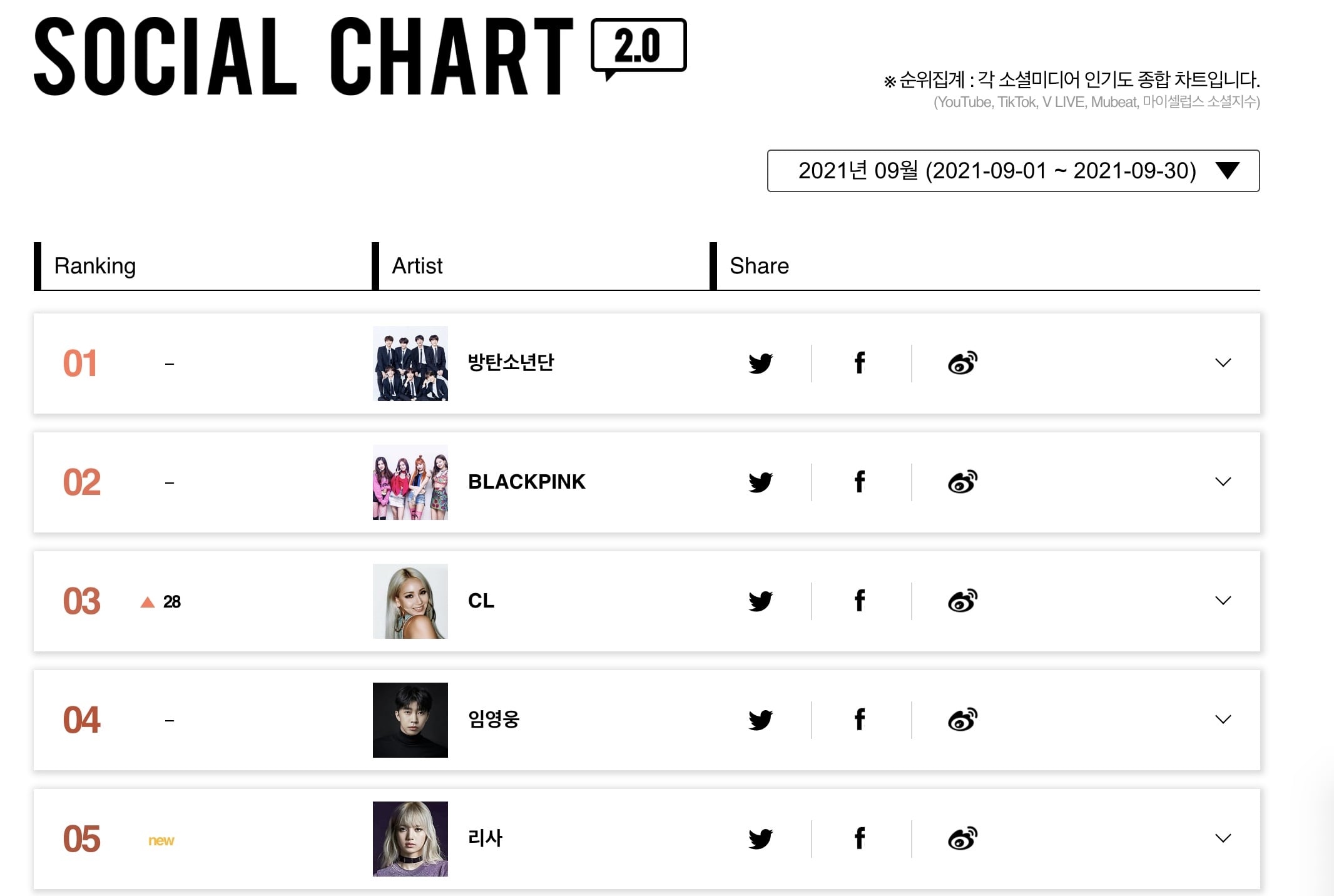 BTS and BLACKPINK continue to top the monthly social chart in September, and trot singer Lim Young Woong held on to his ranking at No. 4. CL rose 28 places on the list to come in at No. 3, while BLACKPINK’s Lisa debuted as a solo artist at No. 5. 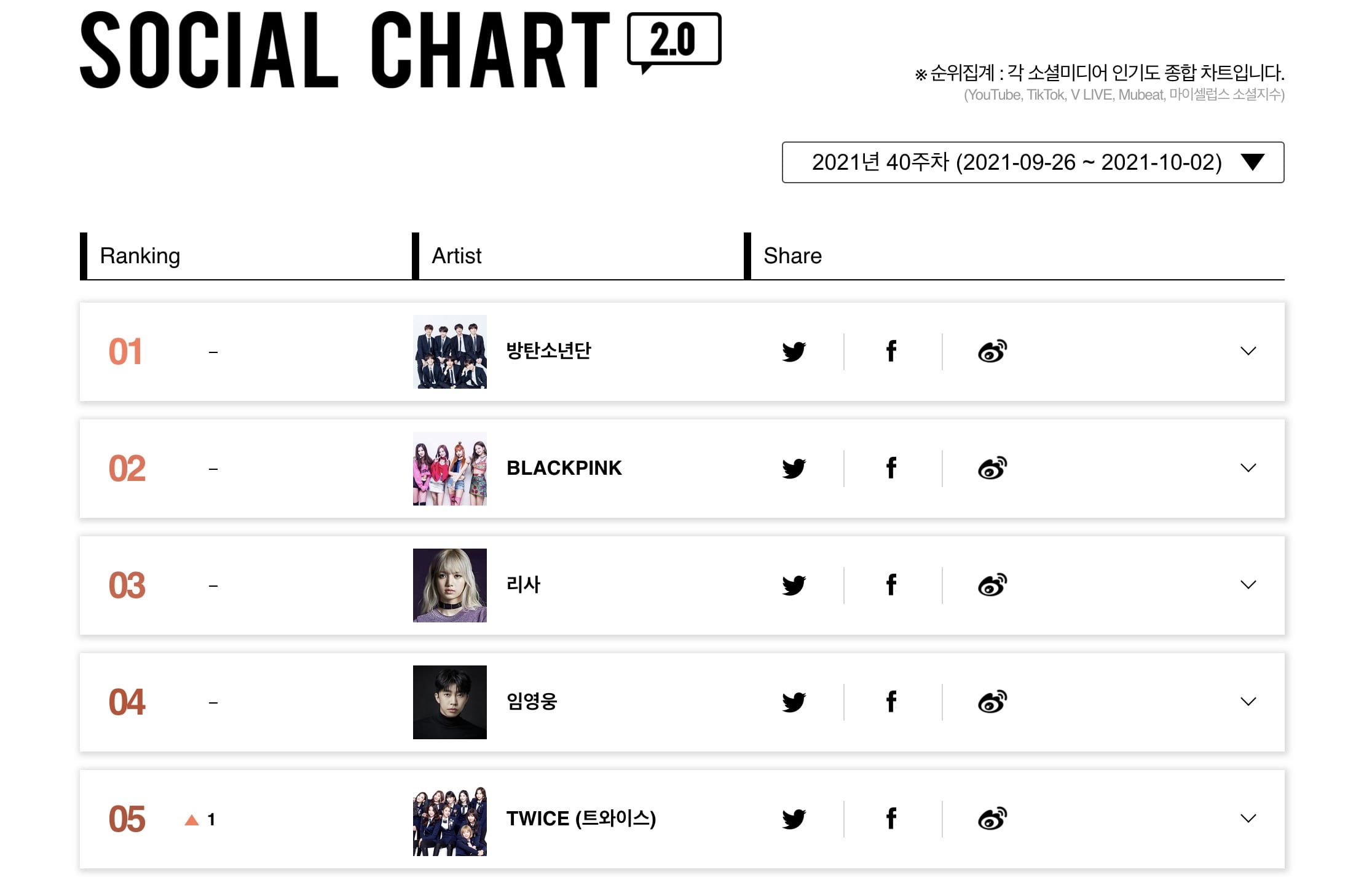 The weekly social chart is the same as last week’s, with BTS, BLACKPINK, Lisa, and Lim Young Woong at No. 1 to No. 4, and TWICE rose up one position to come in at No. 5.