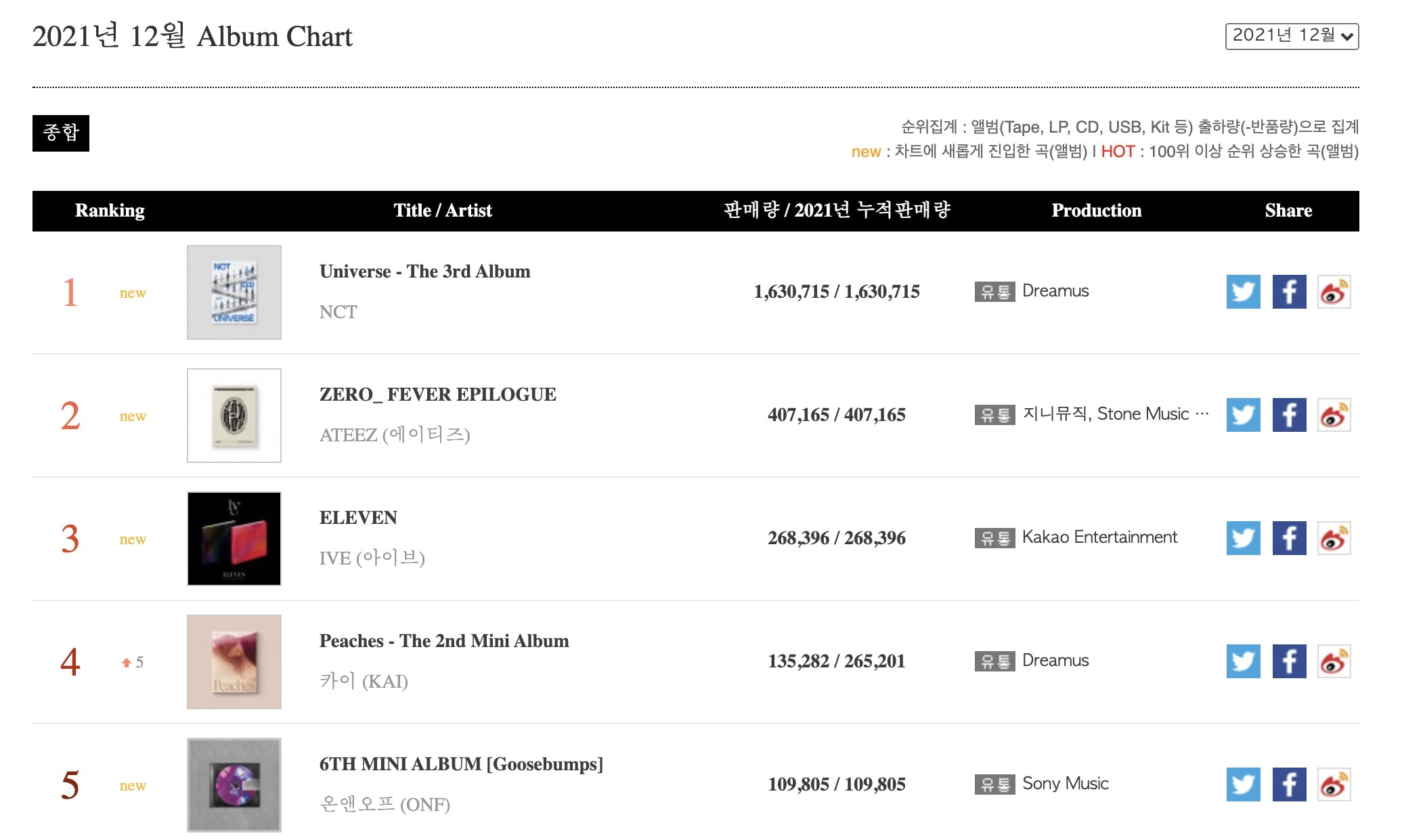 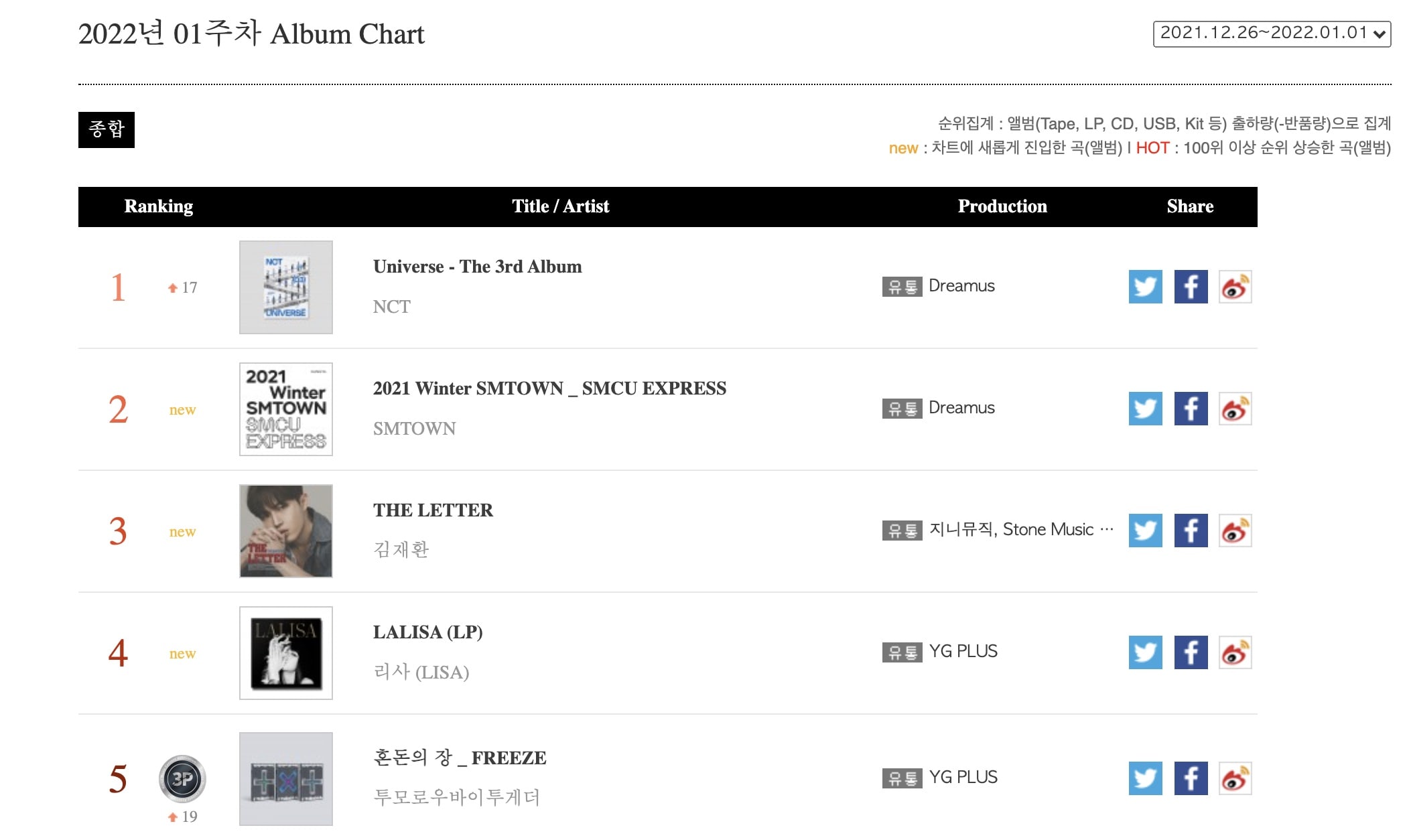 NCT’s “Universe” topped the weekly album chart as well for the week of December 26 to January! SM Entertainment’s winter special album, “2021 Winter SMTOWN: SMCU EXPRESS,” followed at No. 2, and Kim Jae Hwan’s “THE LETTER” came in at No. 4. BLACKPINK’s Lisa’s “LALISA” in LP form took the No. 4 spot, and TXT’s “The Chaos Chapter: FREEZE” rounded out the top five. 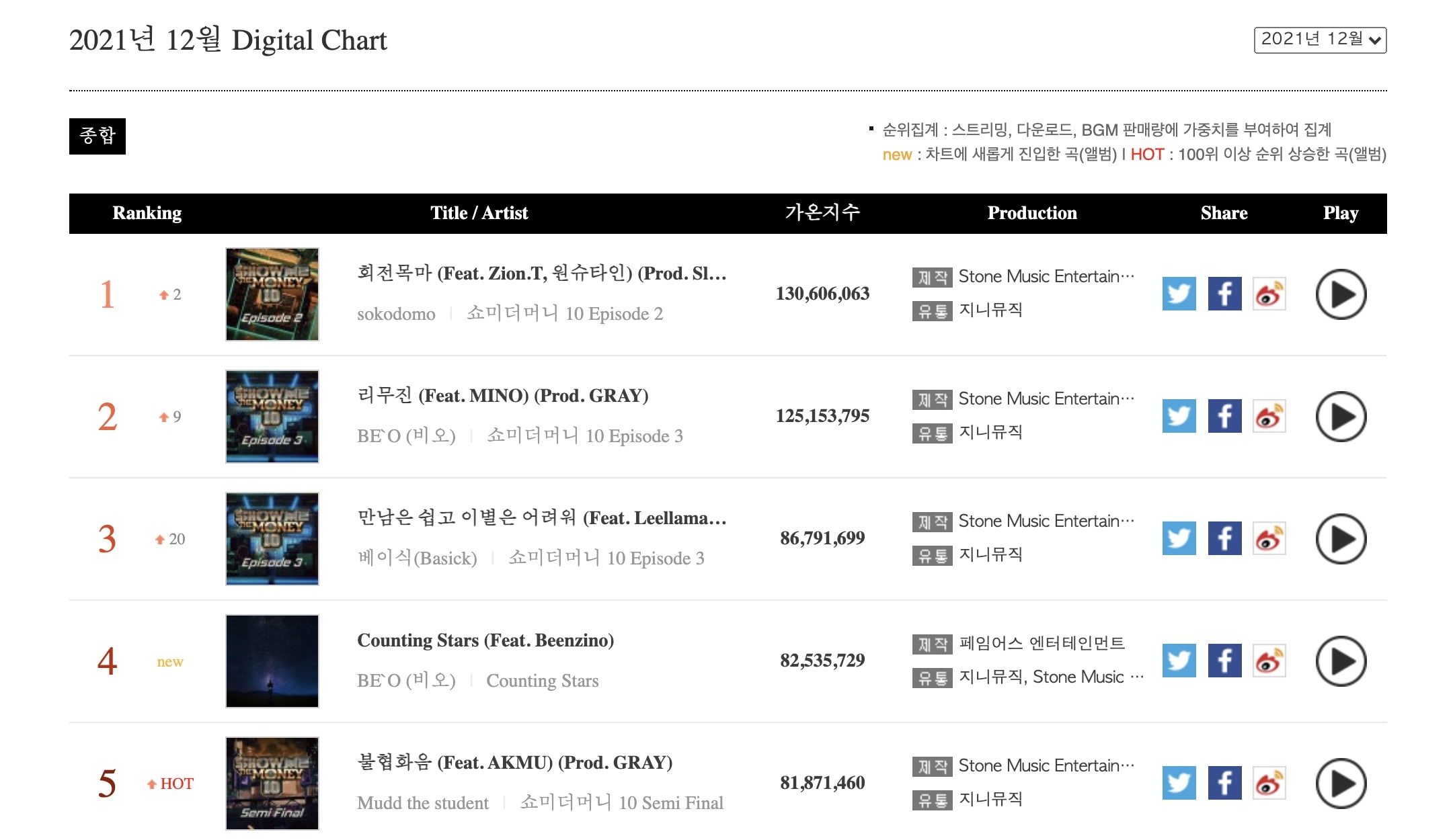 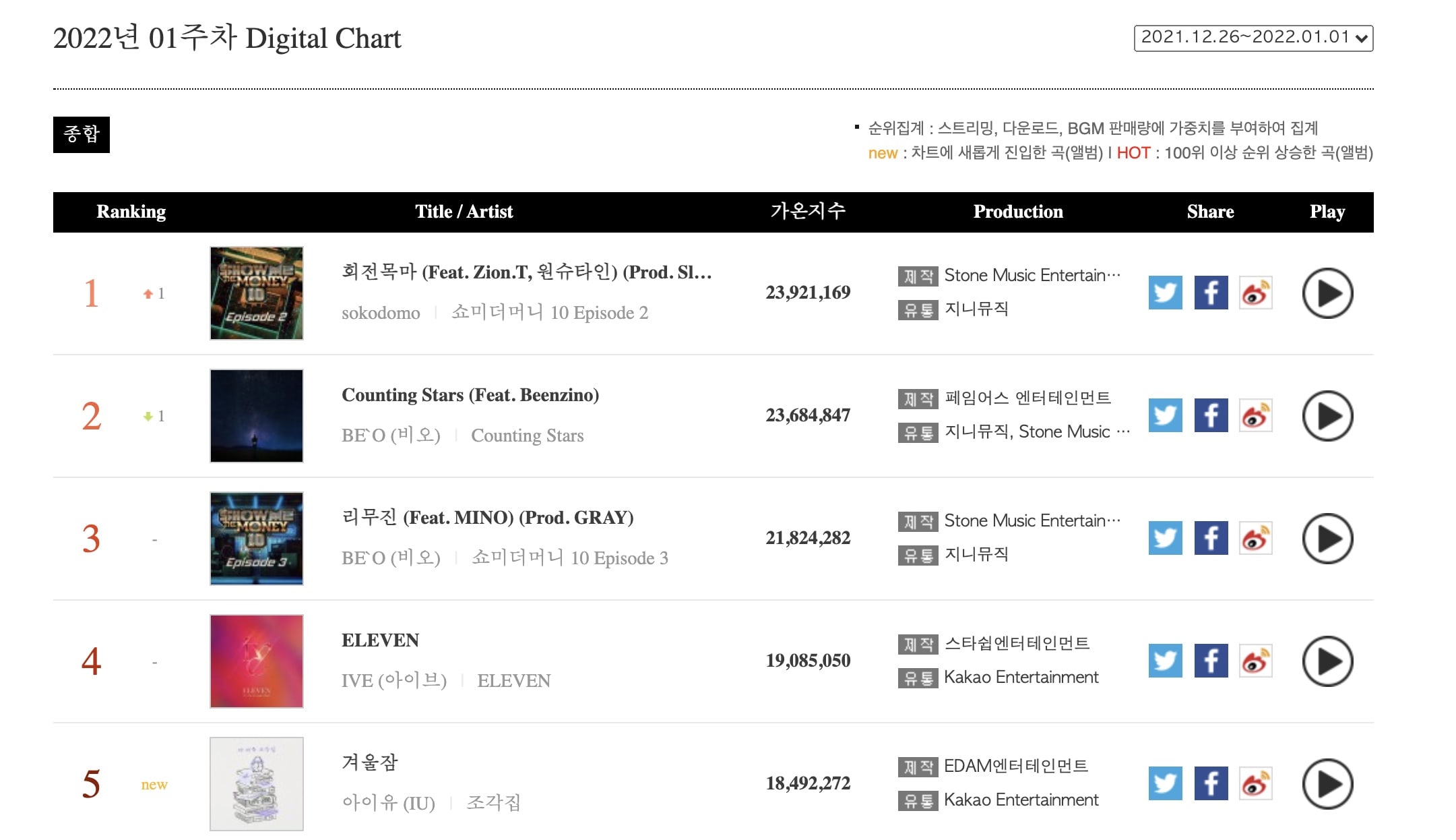 sokodomo’s “Merry-Go-Round” topped the weekly digital chart as well for December 26-January 1, followed by BE’O’s “Counting Stars” and “Limousine.” IVE’s “ELEVEN” held on to its position from last week at No. 4, while IU’s new song “Winter Sleep” roundd out the top five. 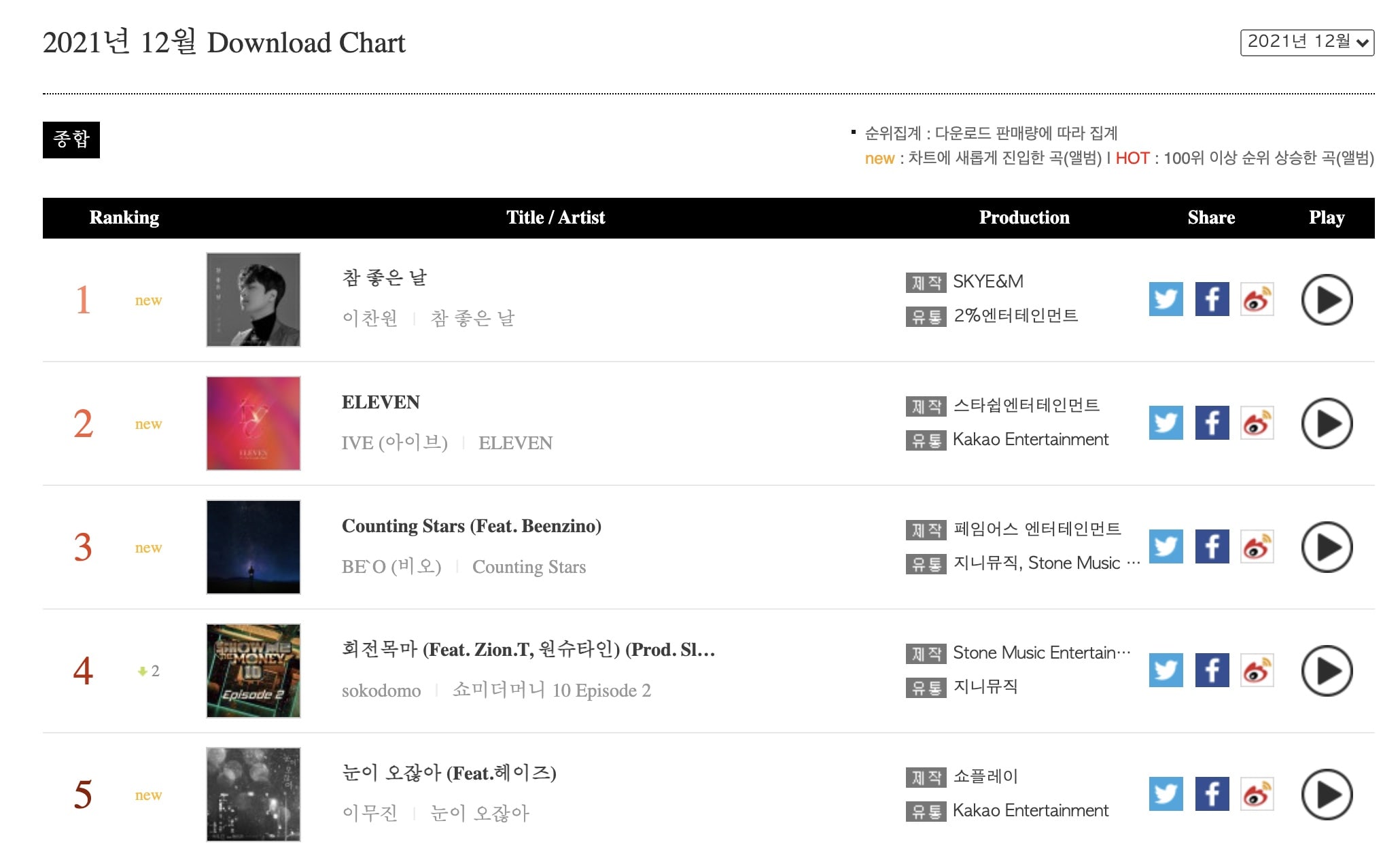 Topping the download chart for the month of December was trot singer Lee Chan Won’s “Good Day.” IVE’s “ELEVEN” followed at No. 2, BE’O’s “Counting Stars” entered at No. 3, and Lee Mujin’s “When It Snows” featuring Heize came in at No. 5. The only holdover from last month is sokodomo’s “Merry-Go-Round” at No. 4. 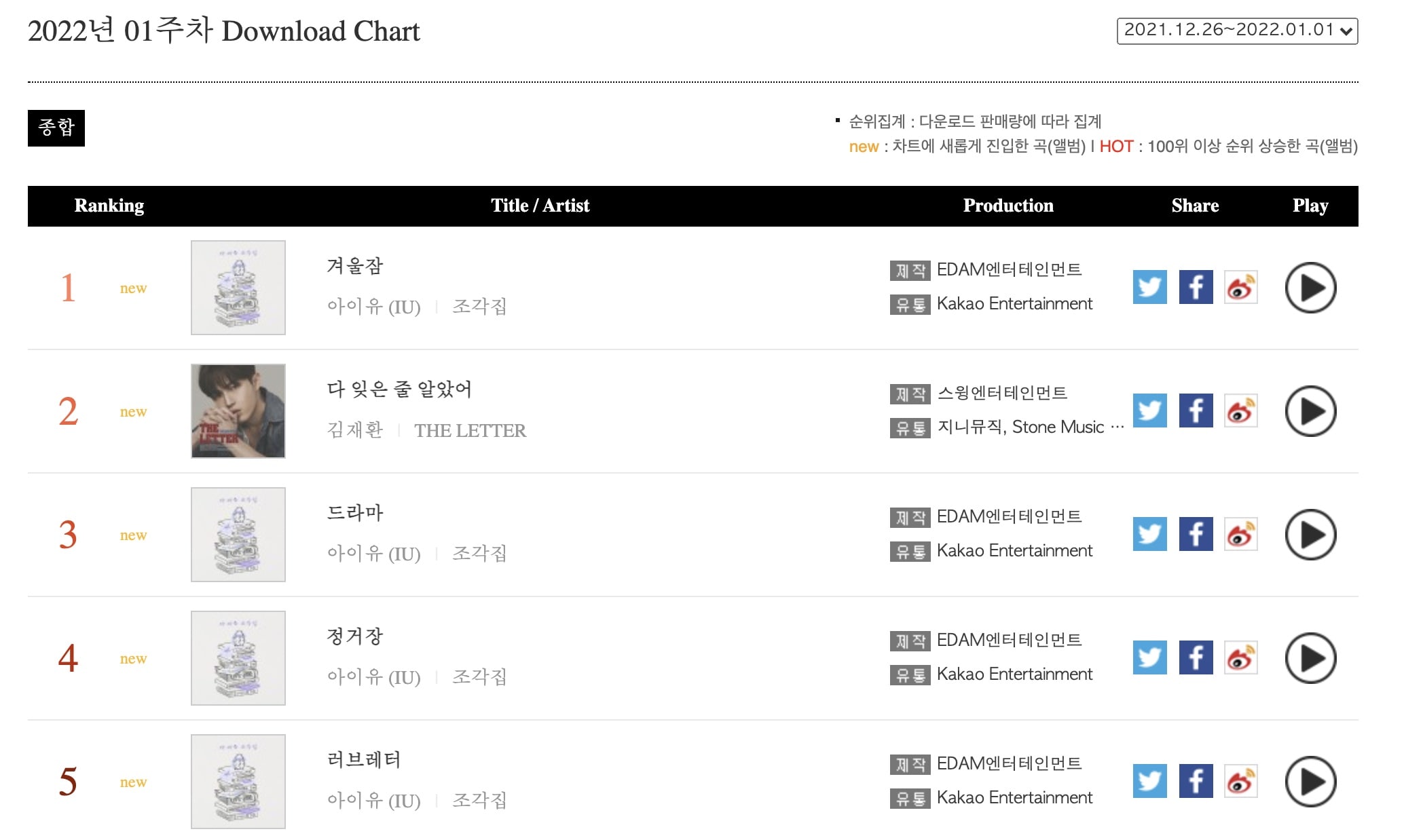 Four of IU’s new songs from her special album “Pieces” appeared on the download chart for the week of December 26-January 1. “Winter Sleep” headed the list, followed by Kim Jae Hwan’s “Unforgettable” at No. 2. IU’s “Drama,” “Next Stop,” and “Love Letter” rounded out the rest of the top five in that order. 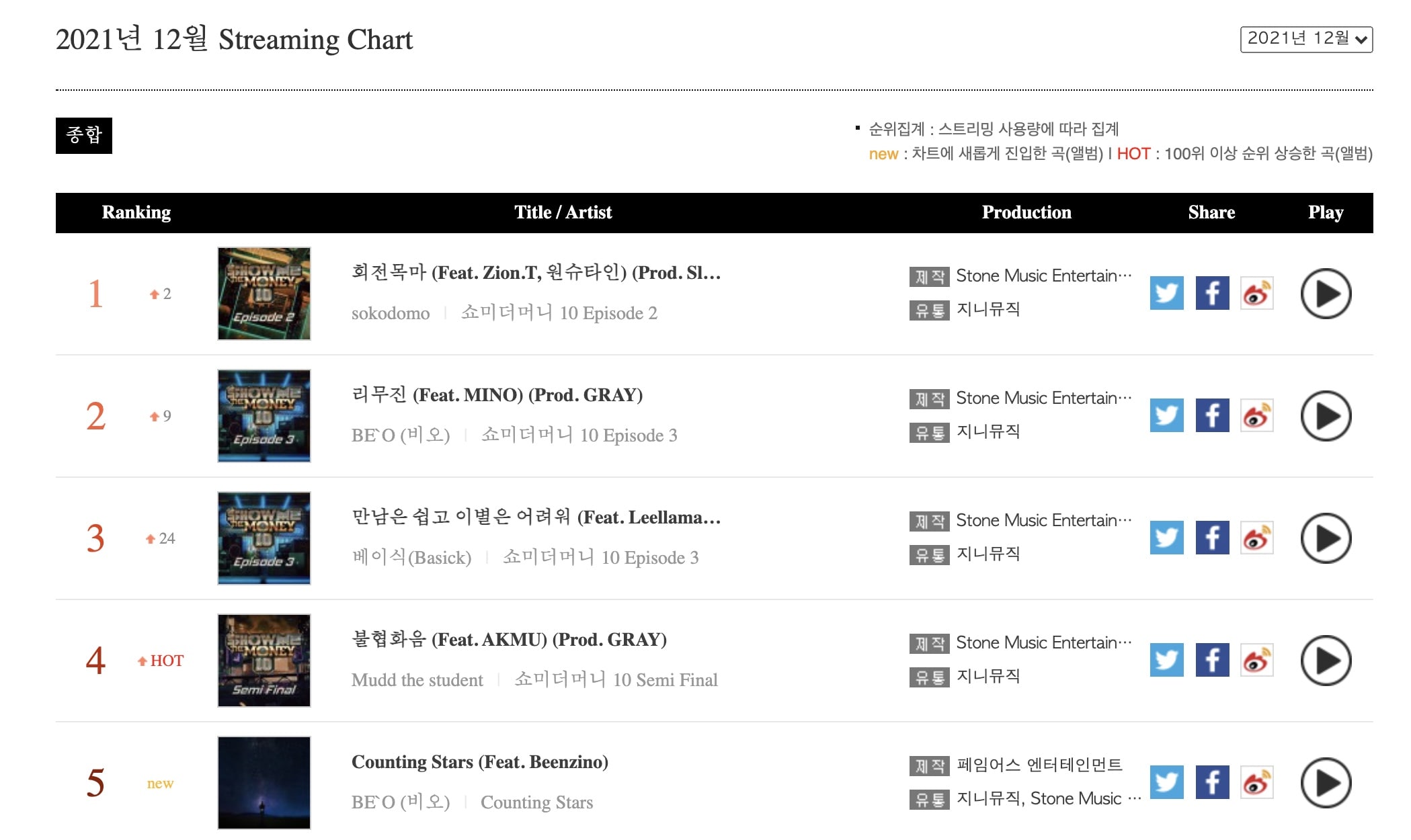 “Show Me the Money 10” and BE’O also dominated the streaming chart for the month of December. “Merry-Go-Round” took No. 1 again, followed by “Limousine,” “Meeting Is Easy, Parting Is Hard,” “Dissonance,” and “Counting Stars.” 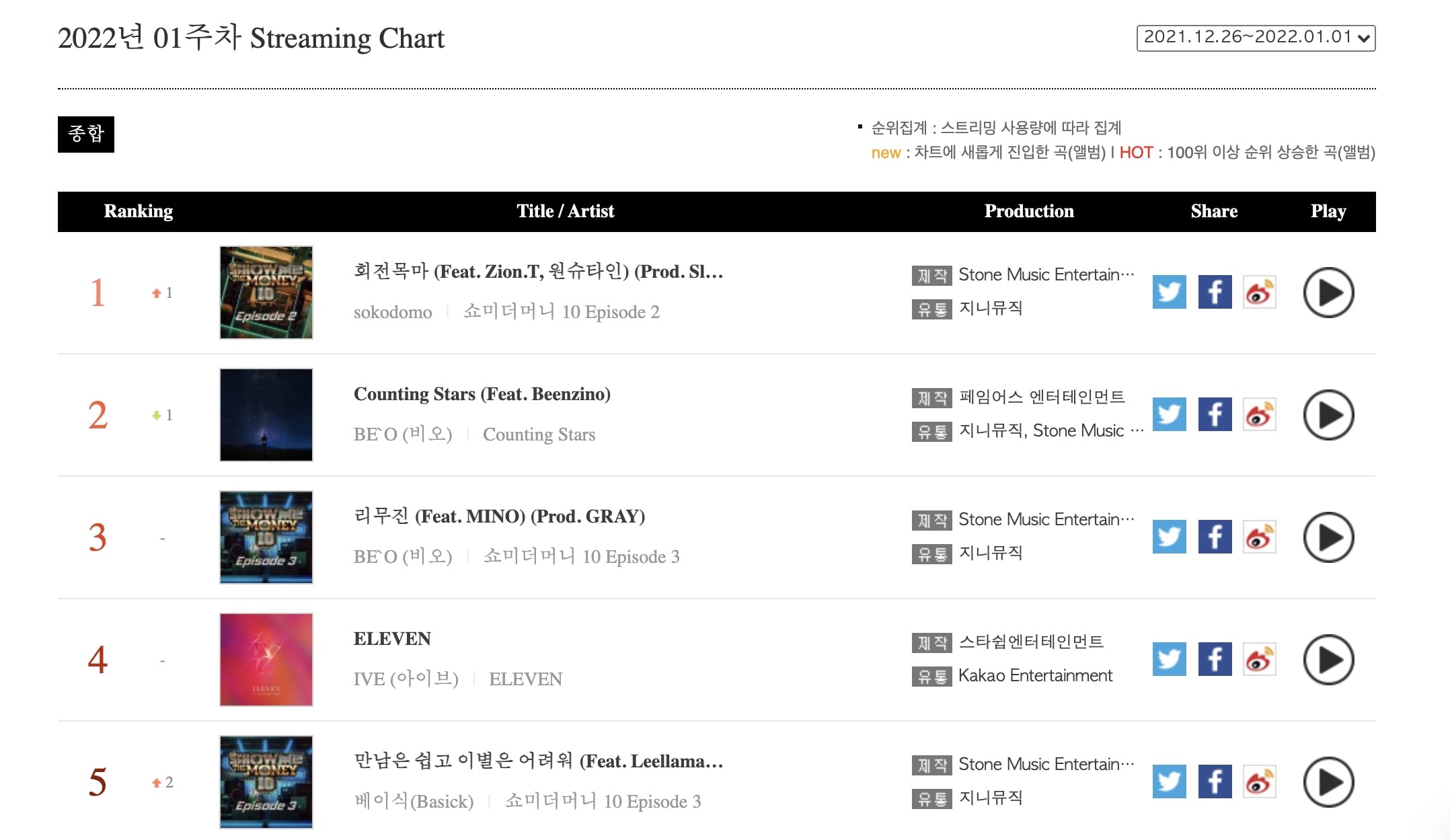 “Merry-Go-Round” topped yet another chart with No. 1 on the streaming chart for the week of December 26-January 1. BE’O’s “Counting Stars” dropped to No. 2, though “Limousine” held on to its No. 3 spot. IVE’s “ELEVEN” also maintained its position at No. 4 from last week, while “Meeting Is Easy, Parting Is Hard” rose to take No. 5. 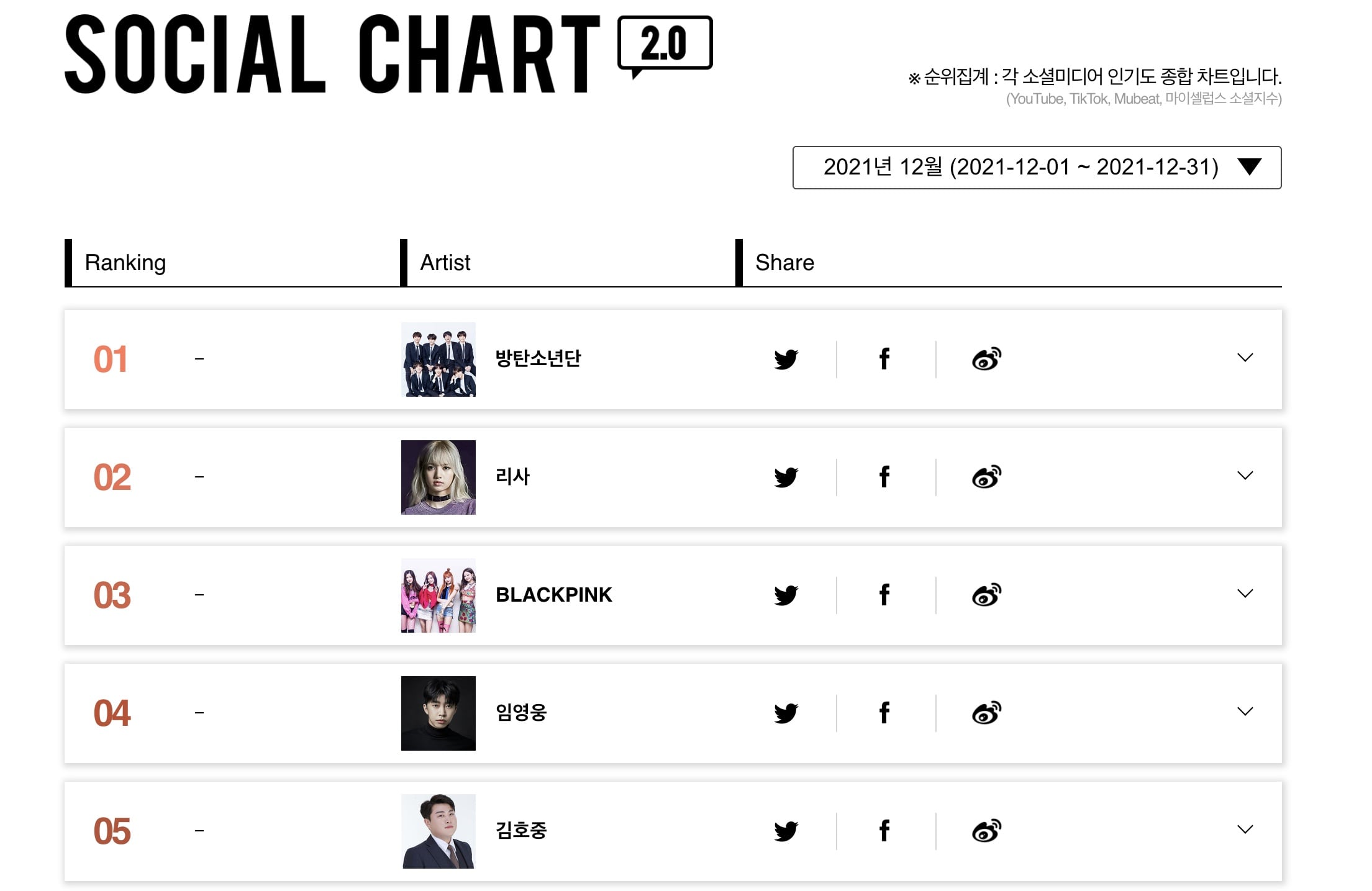 The social chart for December is the same as last month, with BTS at the top, followed by BLACKPINK’s Lisa, BLACKPINK, and trot singers Lim Young Woong and Kim Ho Joong. 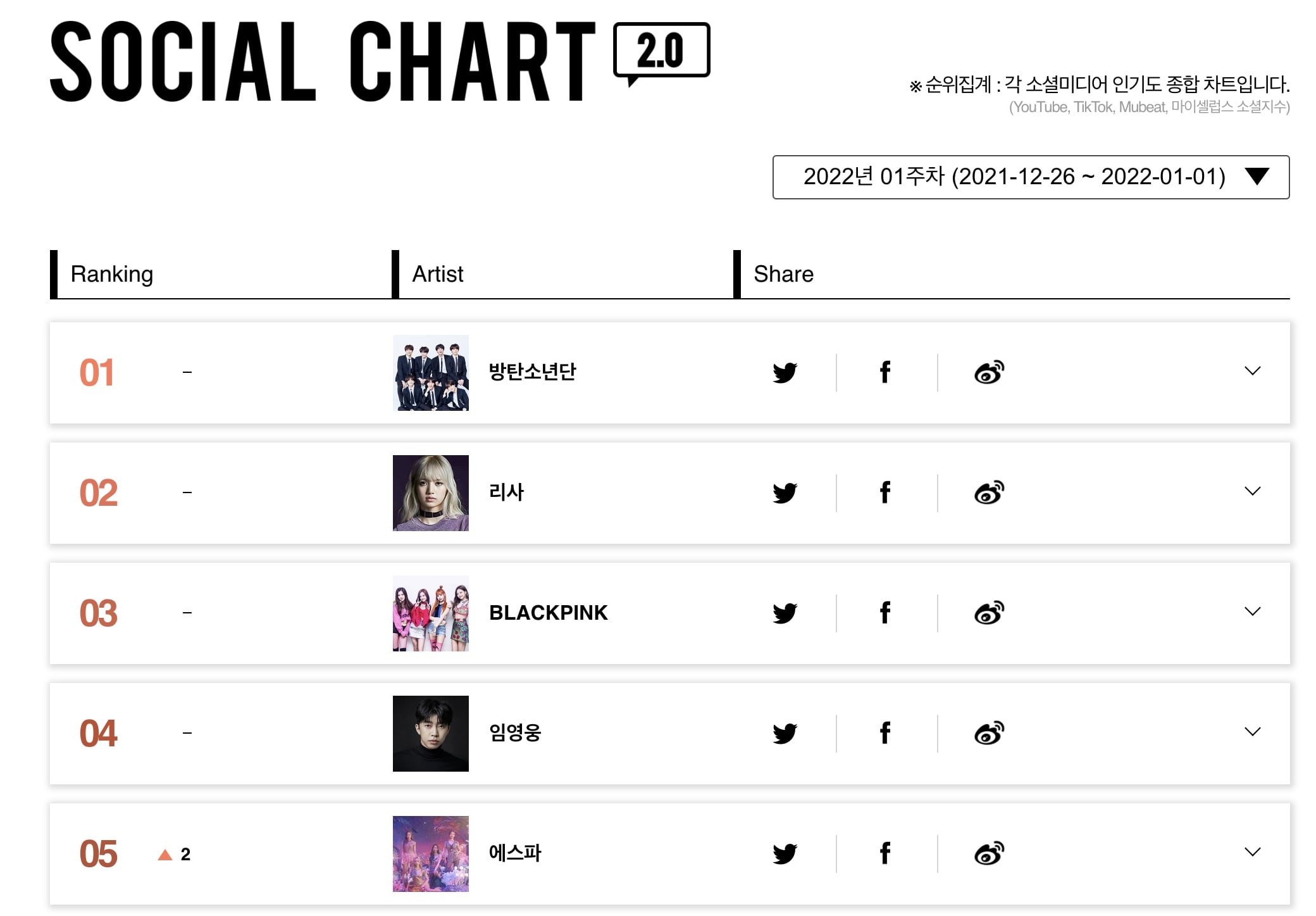 The social chart for the week of December 26-January 1 featured a small change after months of maintaining the top five. BTS, BLACKPINK’s Lisa, BLACKPINK, and Lim Young Woong stayed in the same places from No. 1 to No. 4, but the No. 5 spot was taken this week by aespa.