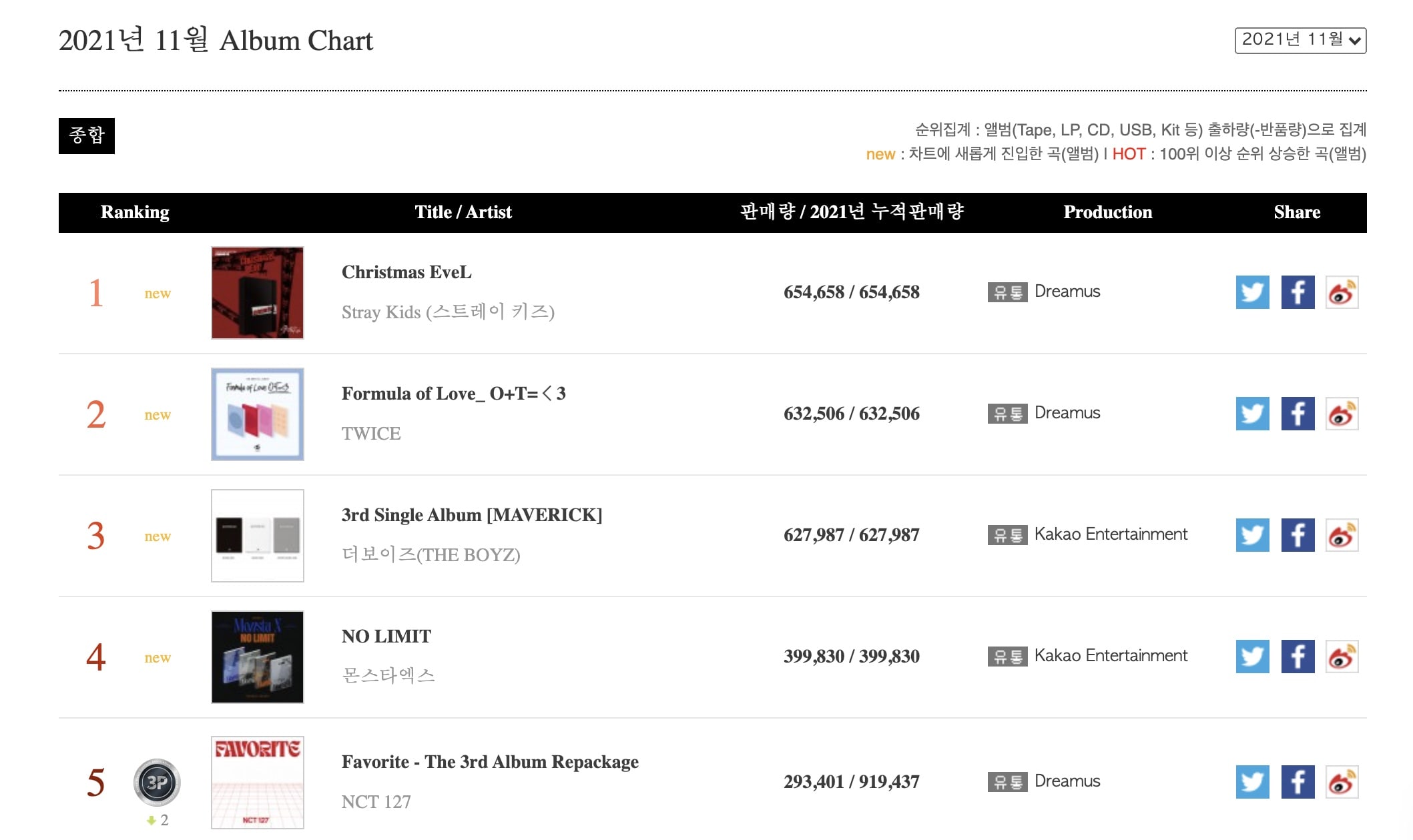 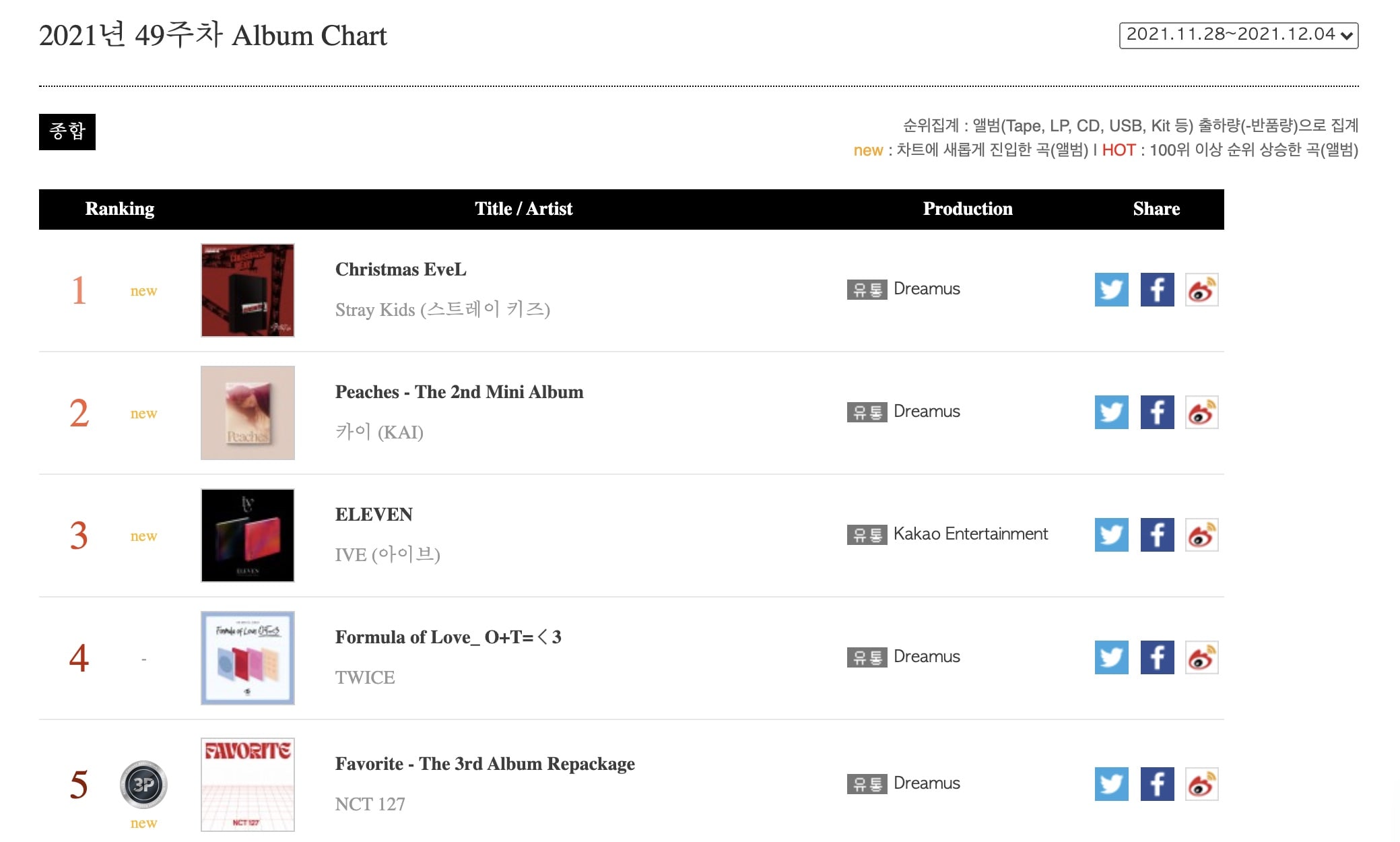 Stray Kids’ “Christmas EveL” topped the album chart for the week of November 28 to December 4 as well. EXO’s Kai’s “Peaches” came in at No. 2, while Starship’s new girl group IVE landed their debut single album “ELEVEN” at No. 3. TWICE’s “Formula of Love: O+T=<3” held on to its position at No. 4 from last week, while NCT 127’s “Favorite” charted at No. 5. 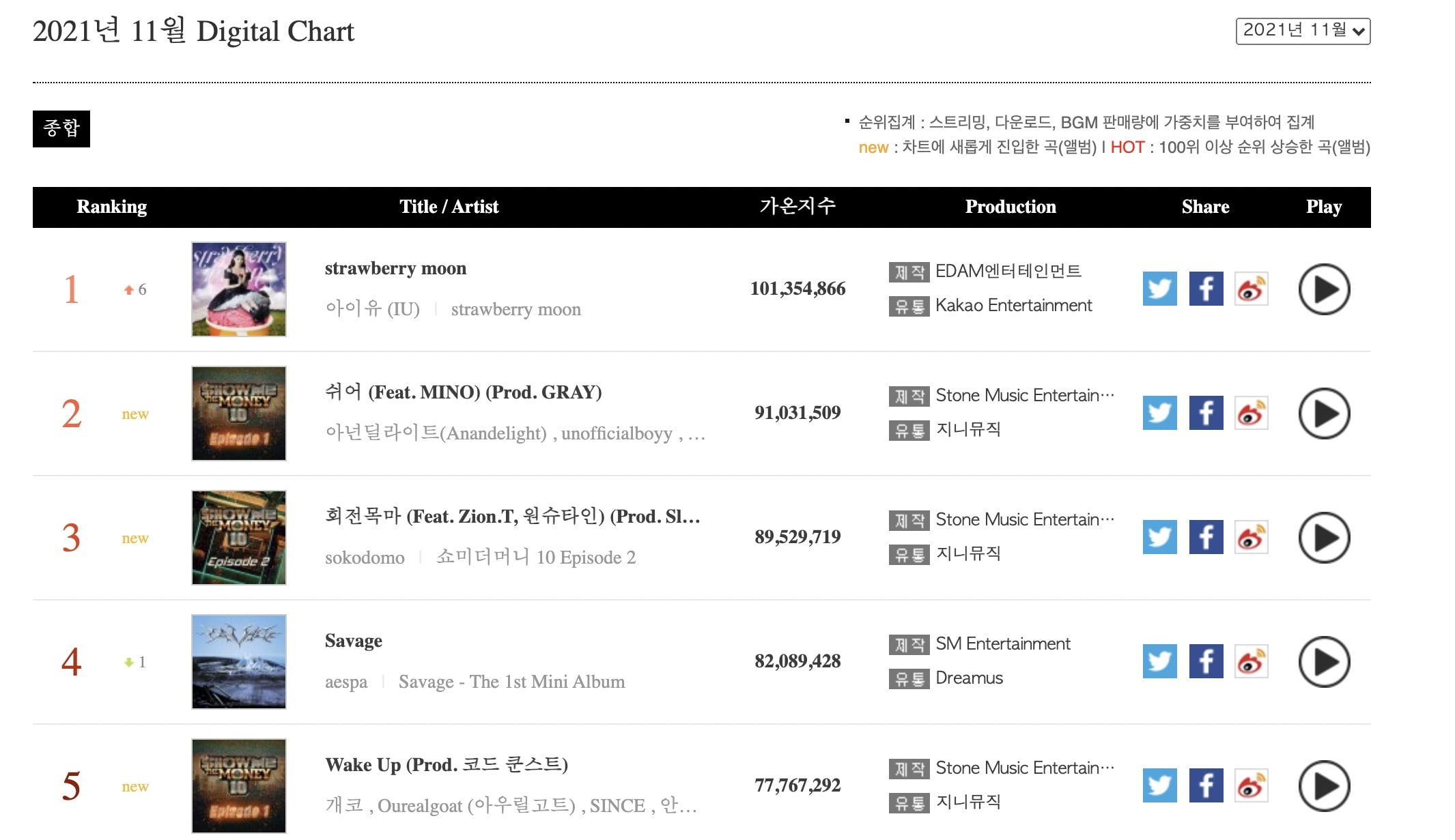 IU, aespa, and “Show Me the Money 10” landed the top five spots on the digital chart for the month of November. “strawberry moon” ranked No. 1, followed by Anandelight, Mudd the Student, BE’O, unofficialboyy, and Geegooin’s “BREATHE” (featuring Song Mino and produced by Gray) at No. 2. sokodomo’s “Merry-Go-Round” (featuring Zion.T and Wonstein and produced by Slom) came in at No. 3, and aespa’s “Savage” at No. 4 (one step down from its ranking last month). Ourealgoat, SINCE, Ahn Byeong Woong, Tabber, and Jo Gwang Il’s “Wake Up” (featuring Gaeko and produced by Code Kunst) rounded out the top five. 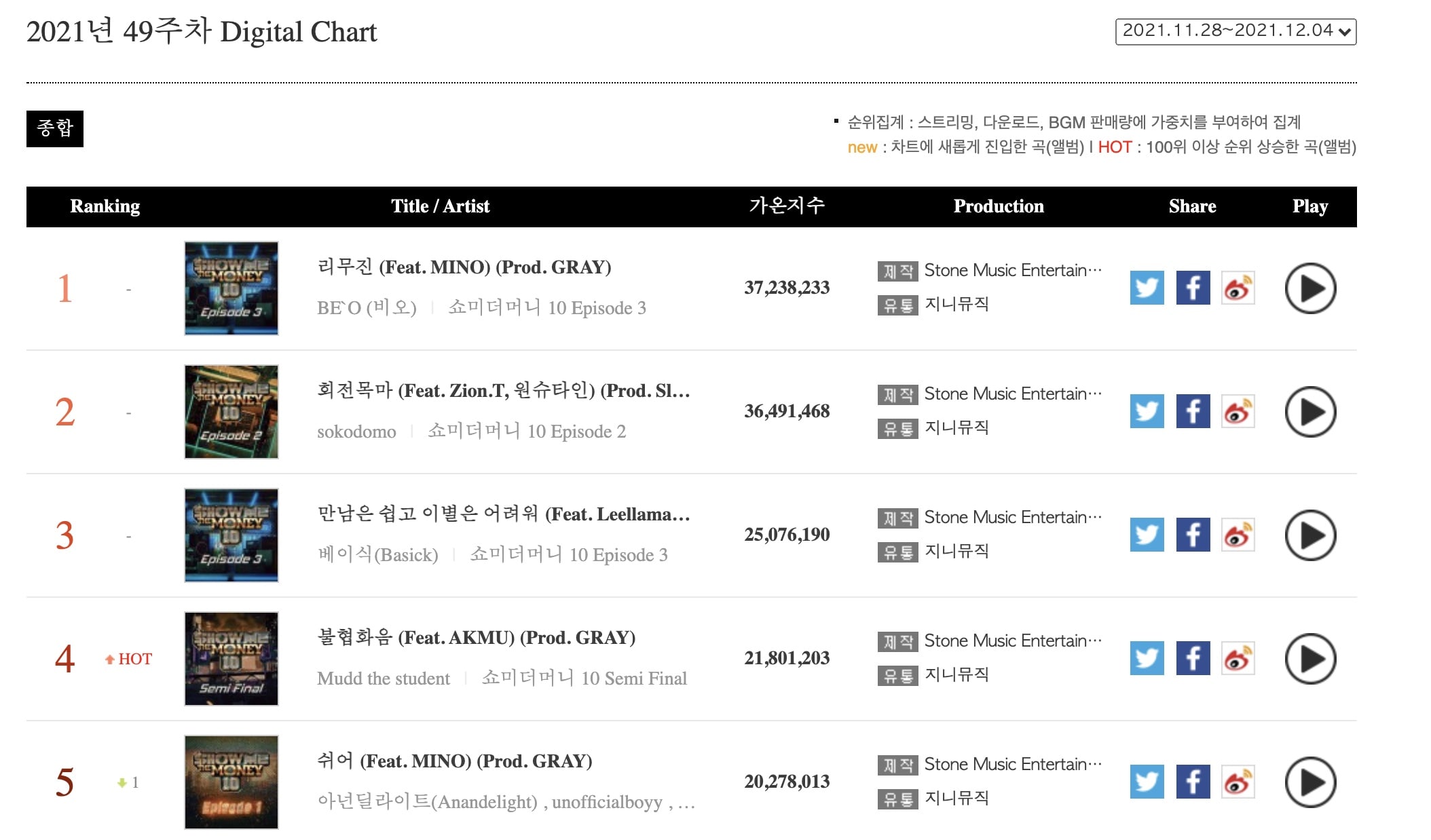 The digital chart for the week of November 28 to December 4 saw “Show Me the Money 10” songs in all the top five positions. BE’O’s “Limousine,” sokodomo’s “Merry-Go-Round,” and Basick’s “Meeting Is Easy, Parting Is Hard” held on top the top three positions from last week. Mudd the Student’s “Dissonance,” featuring AKMU and produced by Gray, rose to the No. 4 position this week, while “BREATHE” dropped to No. 5. 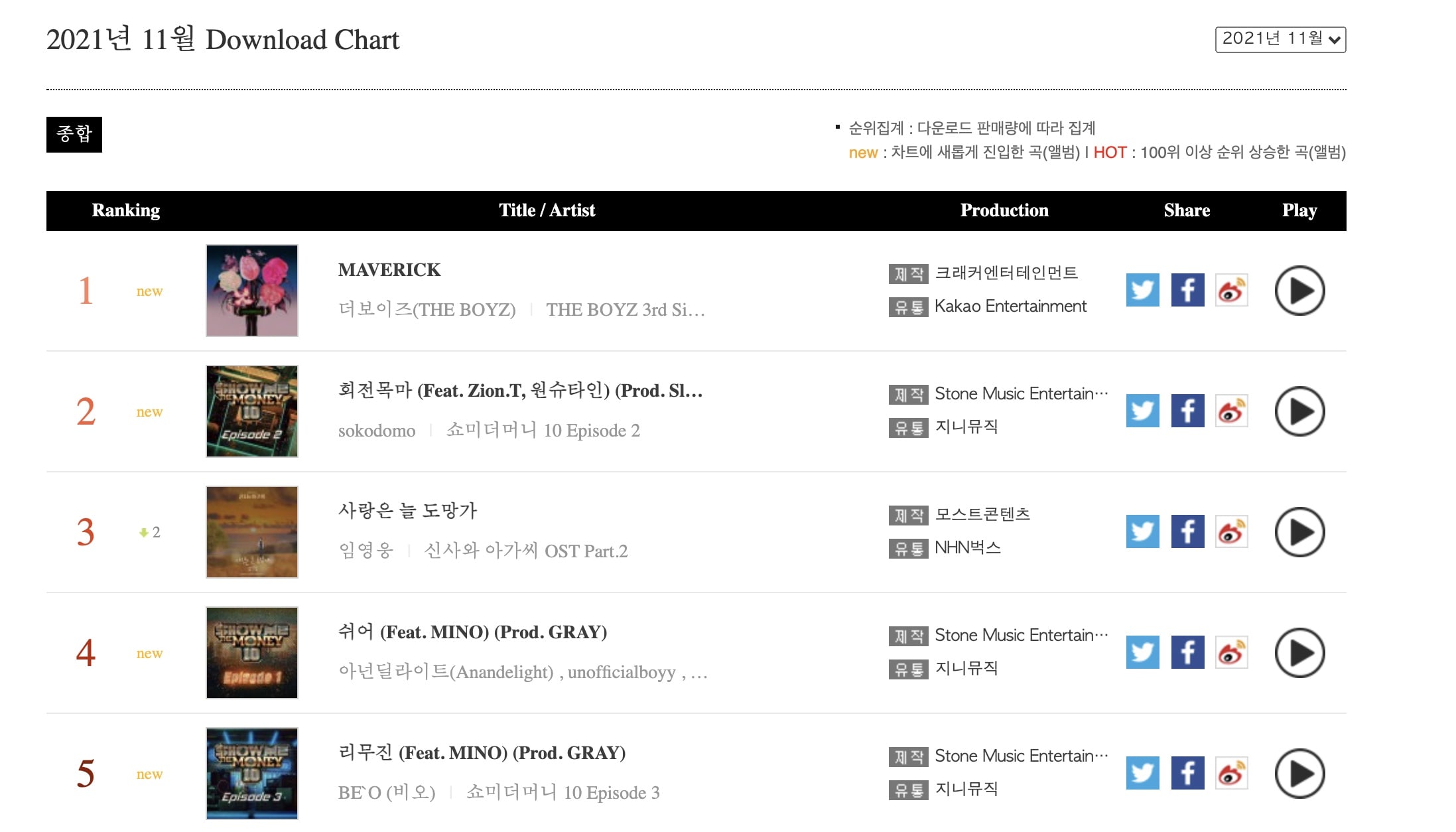 With the exception of Lim Young Woong’s “Love Always Run Away” (OST from “Young Lady and Gentleman“), the download chart for November features all new entries in the top five. THE BOYZ topped this chart this month with “MAVERICK,” while sokodomo’s “Merry-Go-Round” came in at No. 2 here as well. “BREATHE” took No. 4, and “Limousine” followed at No. 5. 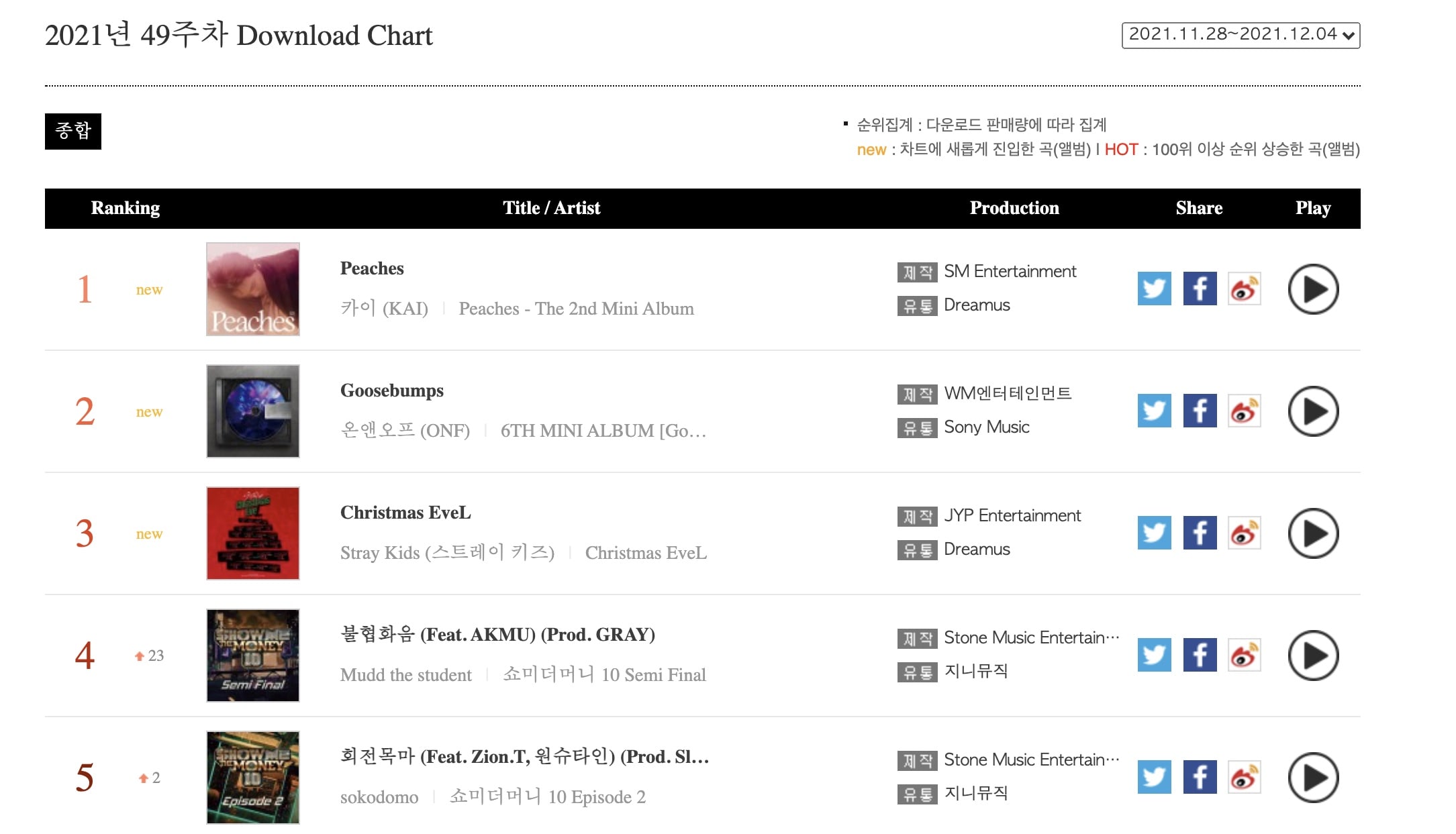 There were also several new entries on the download chart for November 28 to December 4. Kai’s “Peaches,” ONF’s “Goosebumps,” and Stray Kids’ “Christmas EveL” took the top three spots, followed by “Dissonance” at No. 4 and “Merry-Go-Round” at No. 5. 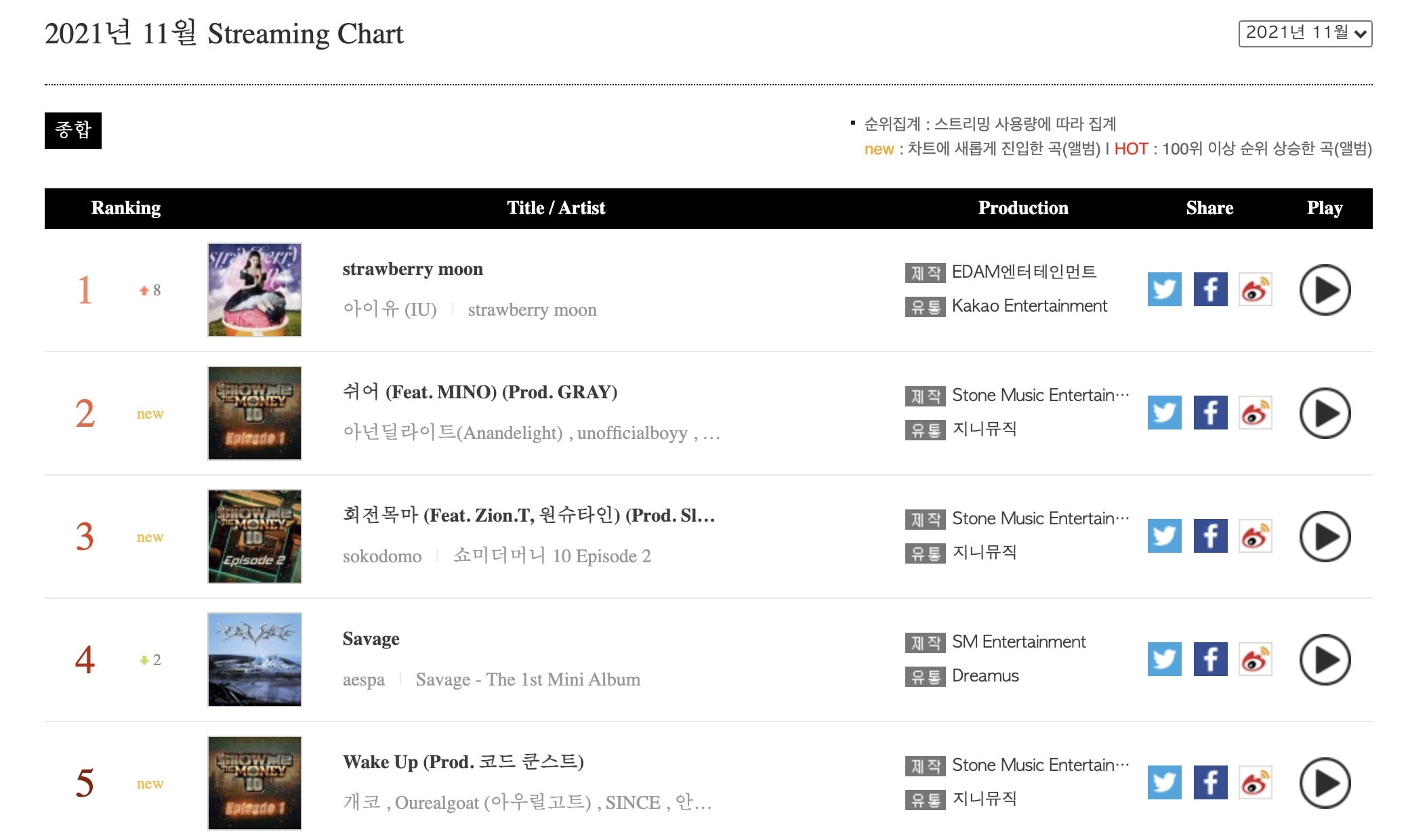 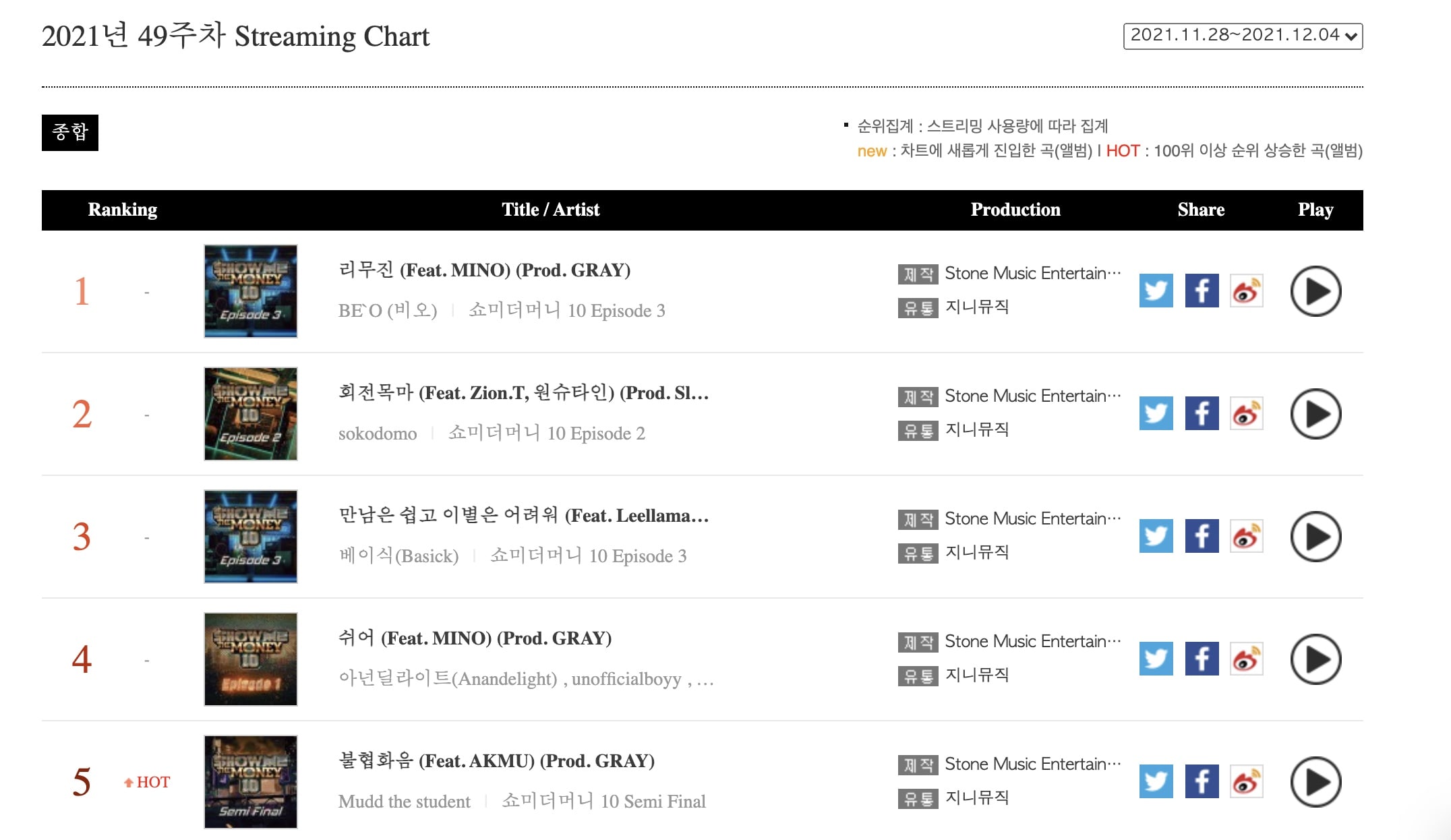 The streaming chart for the week of November 28 to December 4 looks similar to last week, with “Limousine,” “Merry-Go-Round,” “Meeting Is Easy, Parting Is Hard,” and “BREATHE” maintaining their positions in the top four. No. 5 was taken this week by “Dissonance,” also from “Show Me the Money 10.” 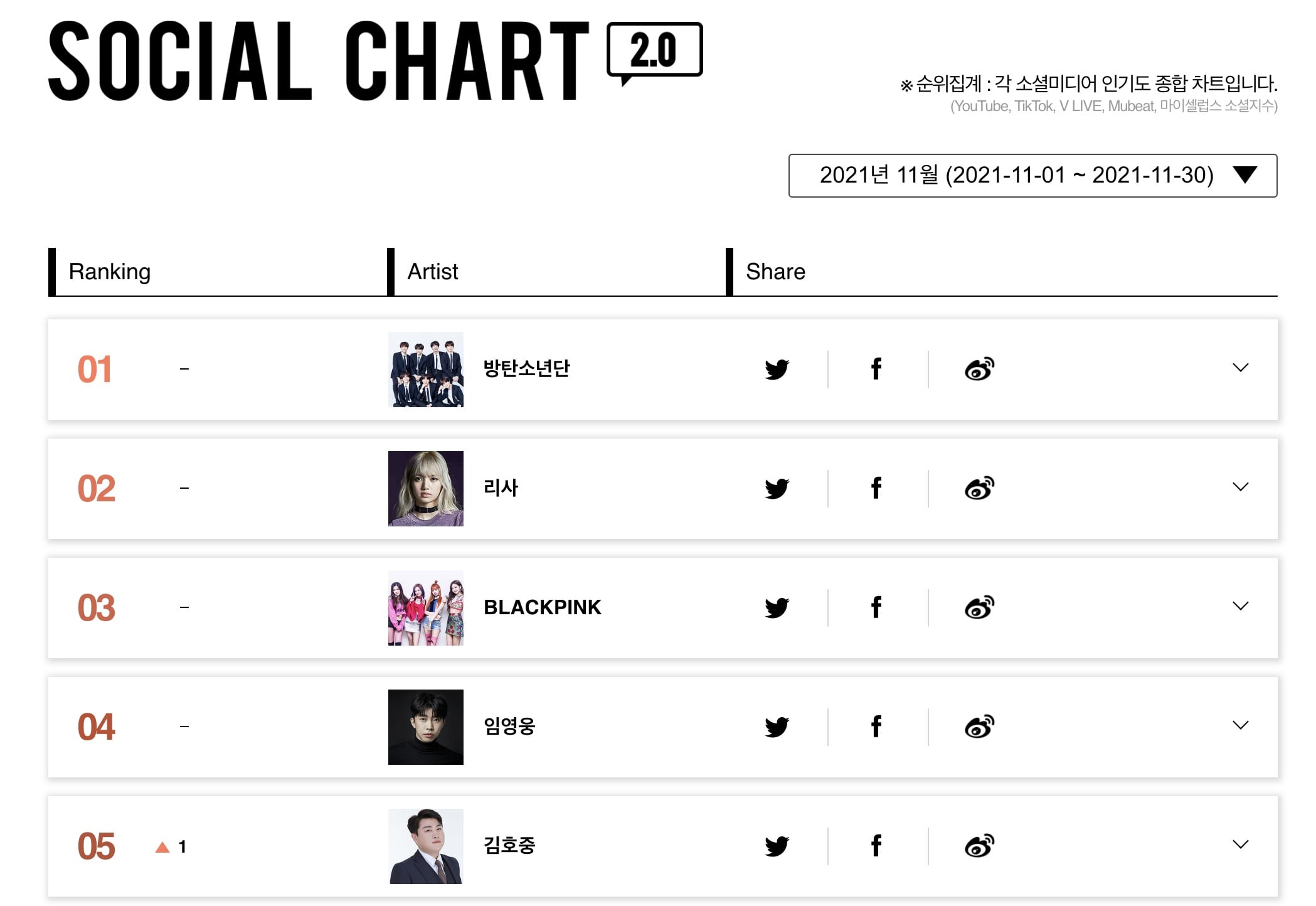 The social chart for the month of November looks the same as the one for the week of November 28 to December 4. Compared to October’s chart, trot singer Kim Ho Joong rose one place to No. 5. The other entries maintained their positions: BTS at No. 1, BLACKPINK’s Lisa at No. 2, BLACKPINK at No. 3, and Lim Young Woong at No. 4. 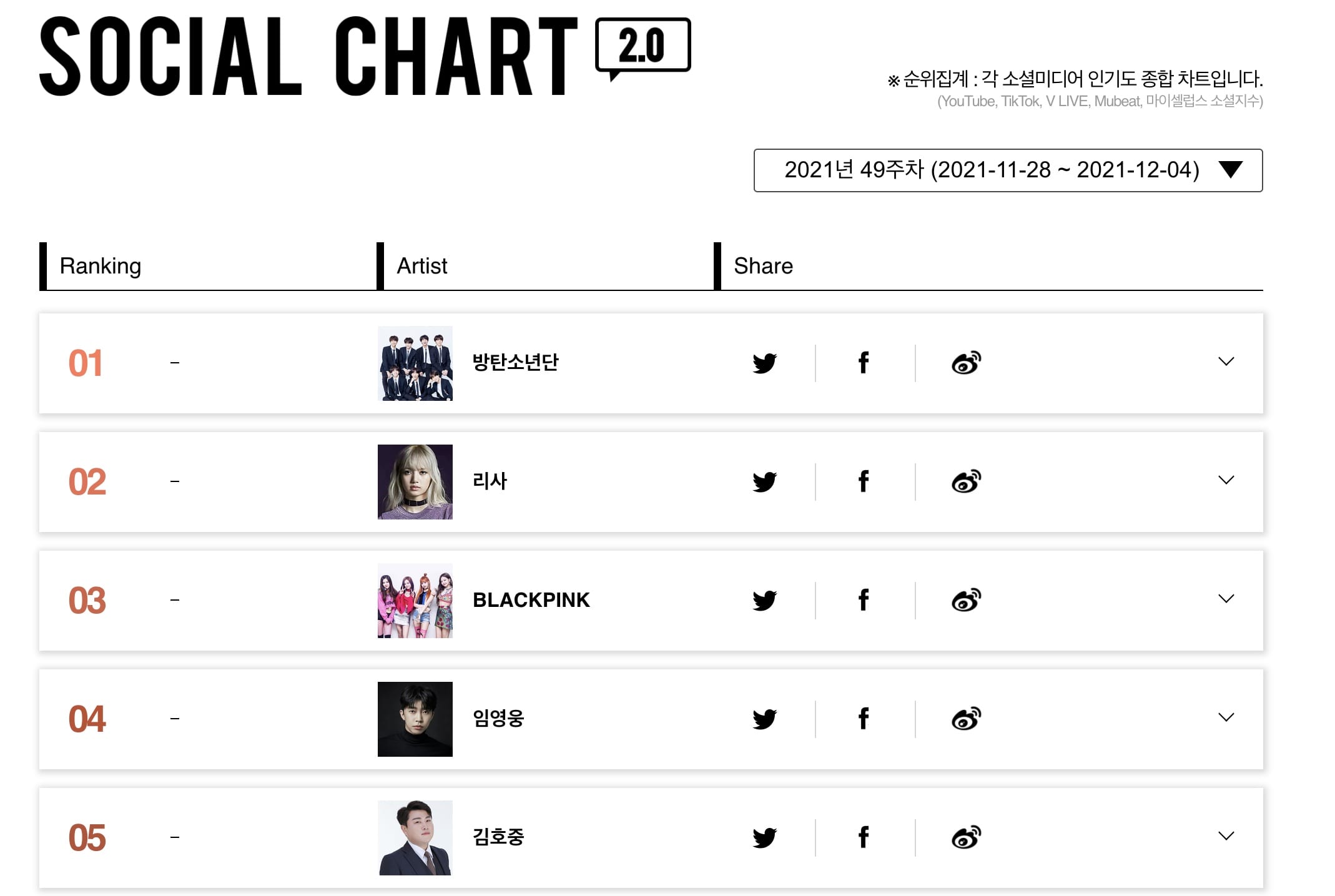 Just like last week, BTS, BLACKPINK’s Lisa, BLACKPINK, Lim Young Woong, and Kim Ho Joong placed in the top five of the social chart for the week of November 28 to December 4.