Everyone loves a good romance from time to time, but what is it about these addictive dramas that really draws people in? Is it the story? The warm-fuzzies that flood your heart that first moment the main characters realize their feelings? Or is it the rush of endorphins when your beloved OTP finally shares their long-awaited first kiss? Perhaps it’s a combination of all of these things, or maybe all of these things are incredible because the actors portraying our favorite on-screen couples have truly fantastic chemistry.

One could argue that it’s the on-screen chemistry that really drives the story, and sometimes actors who are close in age can exude even stronger chemistry.

Here are 10 pairs of actors who are the same age and showed great synergy together! 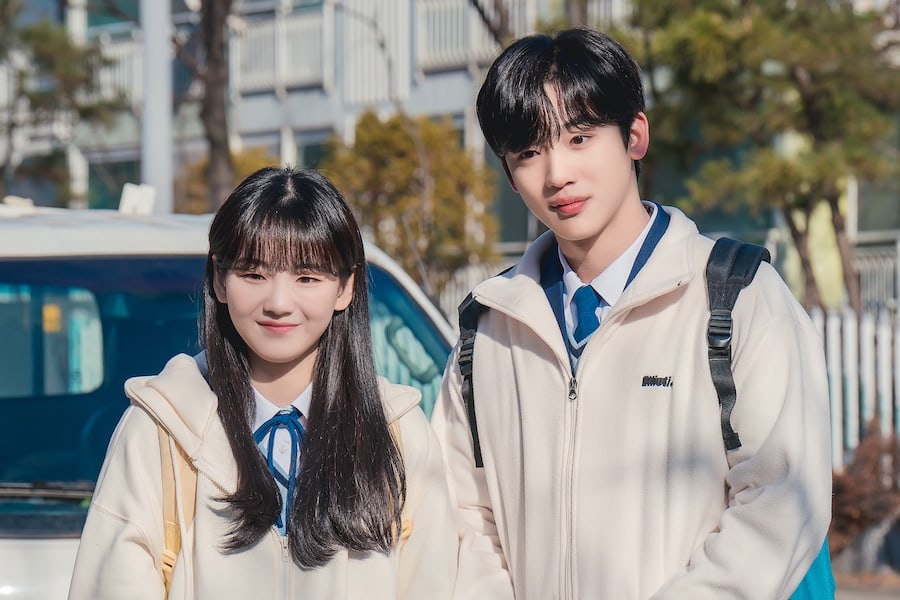 Taking on the roles of Gong Ki Joon and Jin Ji Won, respectively, 1999-line actors WEi’s Kim Yo Han and Cho Yi Hyun shine as a pair of high school dreamers in the latest installment of KBS2’s “School” franchise “School 2021.” Choosing to walk the road less traveled, this young couple isn’t afraid to challenge one another to reach for their dreams, which is what makes them such an adorable couple. The constant encouragement they give one another to break free from the heavy expectations of those around them and pursue that which makes them happiest, regardless of what those around them might say, makes them a perfect couple. 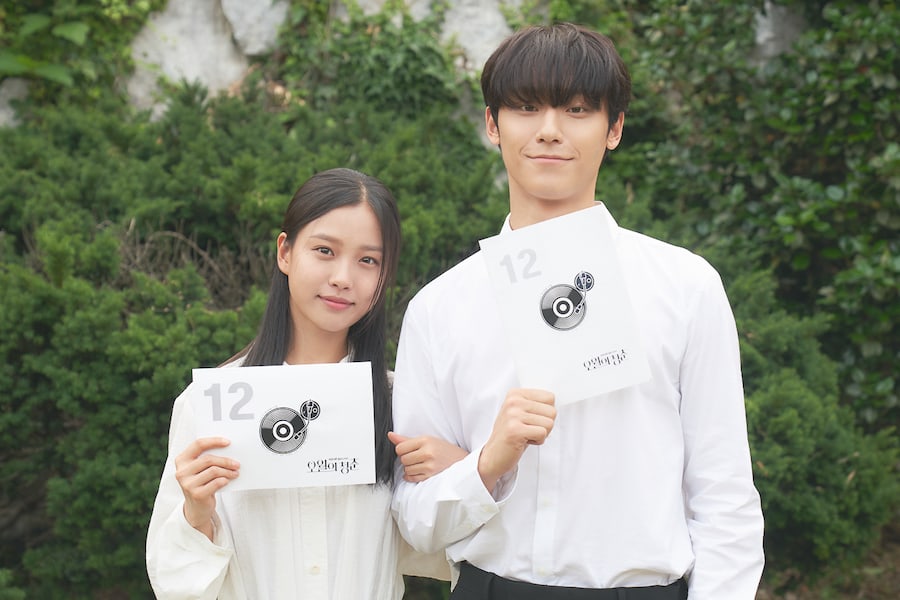 Set during the 1980 Gwangju Uprising, “Youth of May” is a stirring 2021 period drama that is sure to leave a mark. Perhaps it’s the conflict surrounding Lee Do Hyun’s and Go Min Si’s respective characters, Hwang Hee Tae and Kim Myung Hee, that really makes their unexpected love shine, but it could very well be that the background conflict only serves to highlight the amazing chemistry between these actors born in 1995. Even if the first meeting of the young doctor and struggling nurse was an arranged date gone wrong, their shared interest in helping others, the gradual development of their feelings, and the sweet moments they share, even in the midst of a truly chaotic time in history, only serves to prove that these two truly were meant for each other.

Start watching “Youth of May” here: 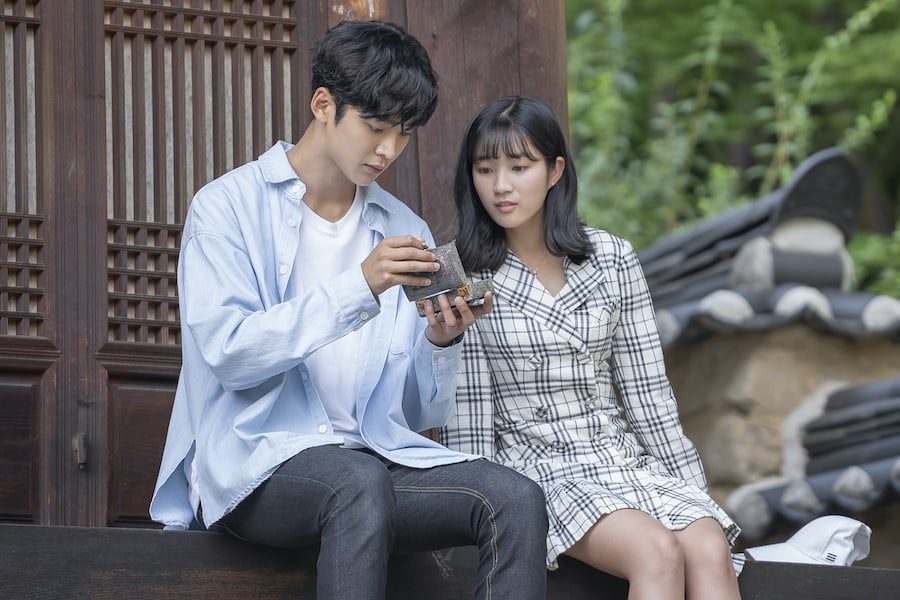 When Kim Hye Yoon’s character Eun Dan Oh realizes she’s living within the pages of a comic book, she takes it upon herself to re-write her cliche side-character story. It’s in doing this that she meets SF9’s Rowoon’s character, the nameless Student Number 13, who she affectionately refers to as Haru. Their adventures together are enough to make the 2019 drama “Extraordinary You” a fun watch, but it’s the undeniable chemistry between the 1996-line actors, those moments when they begin to understand they have the potential to be so much more, the desperation each feels as they begin to realize their fate as side-characters, and their unwavering determination to change that fate that make this webtoon-turned-drama couple shine. 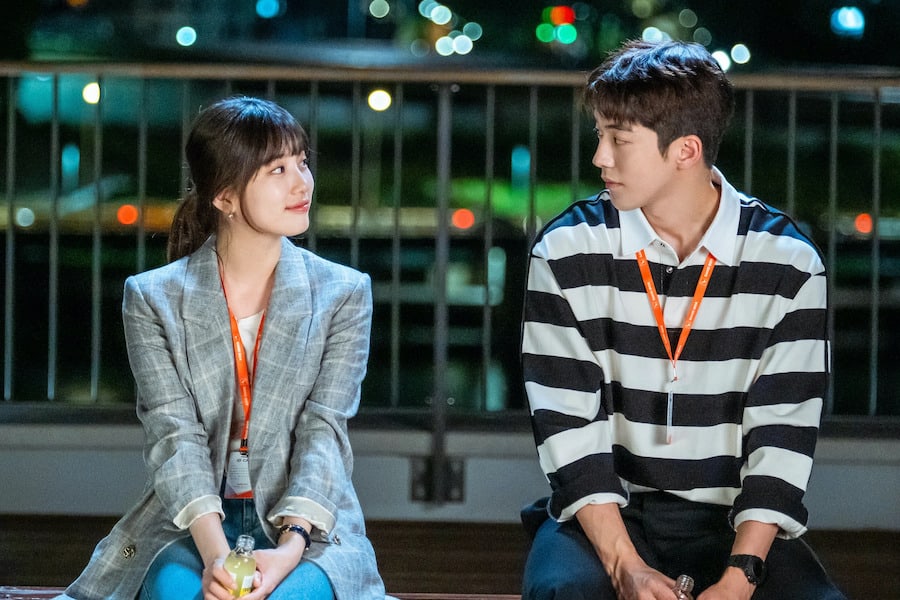 The fates that tie Nam Joo Hyuk’s and Suzy’s characters Nam Do San and Seo Dal Mi together in the 2020 drama “Start-Up” are slightly twisted and a little cruel, but that’s part of what makes this drama great. While Kim Seon Ho’s character Han Ji Pyeong brings some conflict and confusion to the party, the undeniable chemistry between Nam Joo Hyuk and Suzy (both born in 1994) will keep you coming back for more. When Dal Mi’s in trouble, she always finds herself coming back to Do San, and him always being there to help her when she needs it most will make you fall in love with this couple. They’re such brilliant young people full of hopes, dreams, and talent. You know that on their own, they’d both do just fine, but when they’re together they make you believe they’re unstoppable, and you find yourself cheering for them until the very end. 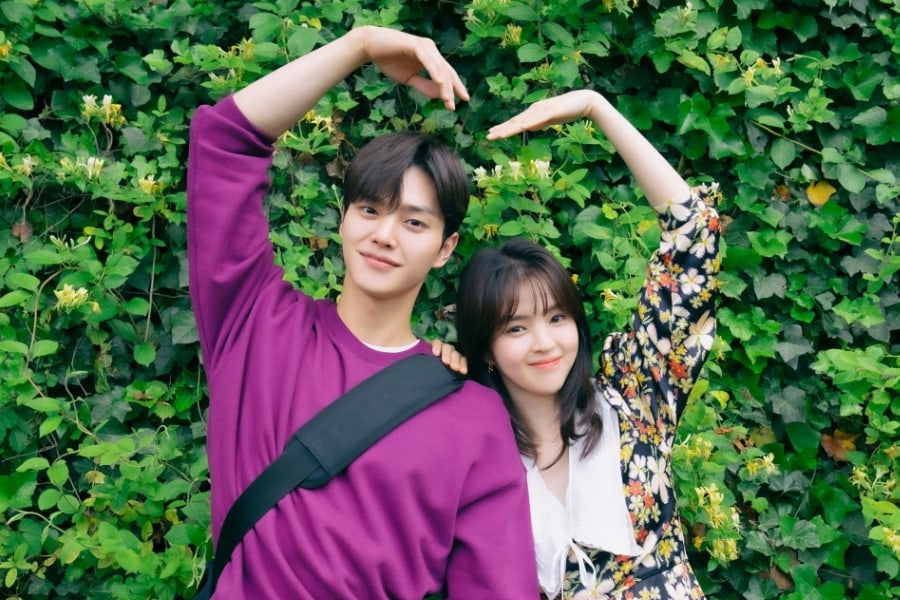 Based on the webtoon of the same name by Jung Seo, “Nevertheless” is a 2021 romance you don’t want to miss. With Han So Hee playing the heartbroken and jaded Yoo Na Bi, and Song Kang playing opposite as the flirtatious Park Jae Eon, you already know you’ve got a recipe for success. Watching these two go head-to-head and then heart-to-heart is the stuff that romance junkies like ourselves live for, and these actors born in 1994 perfectly pulled it off with their chemistry. 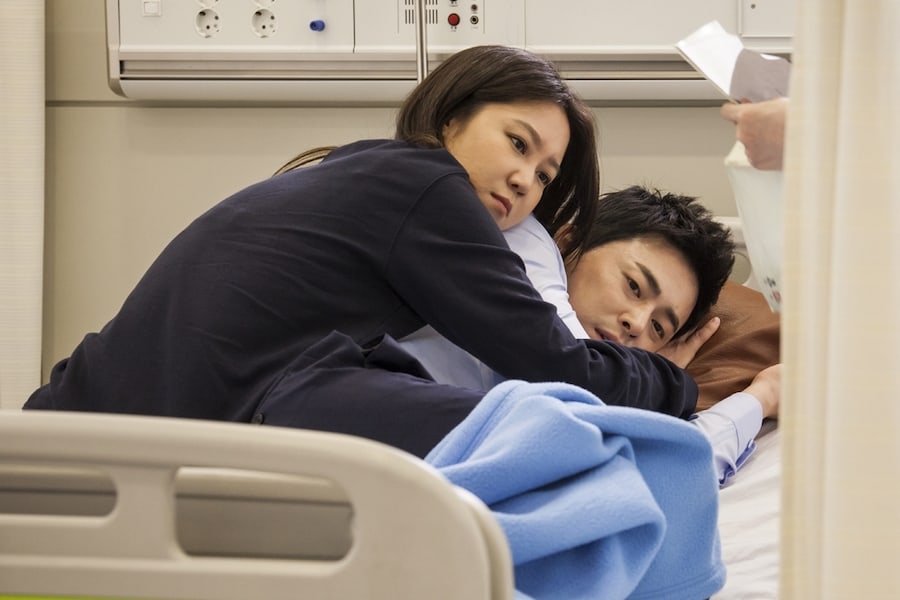 The chemistry between 1980-line friends Jo Jung Suk and Gong Hyo Jin in the 2016 workplace romance drama “Don’t Dare to Dream” (also known as “Jealousy Incarnate”), is nothing short of magic. Having long harbored a crush on handsome news anchor Lee Hwa Shin (Jo Jung Suk), Gong Hyo Jin as struggling weather woman Pyo Na Ri has finally decided that enough is enough. Putting her crush aside, Na Ri turns her attention elsewhere, both professionally and romantically, which inadvertently ignites all sorts of fireworks between her and Hwa Shin. To say the chemistry between Jo Jung Suk and Gong Hyo Jin in this drama is anything less than electric would be an understatement to the nth degree.

Watch the first episode of “Don’t Dare to Dream” here: 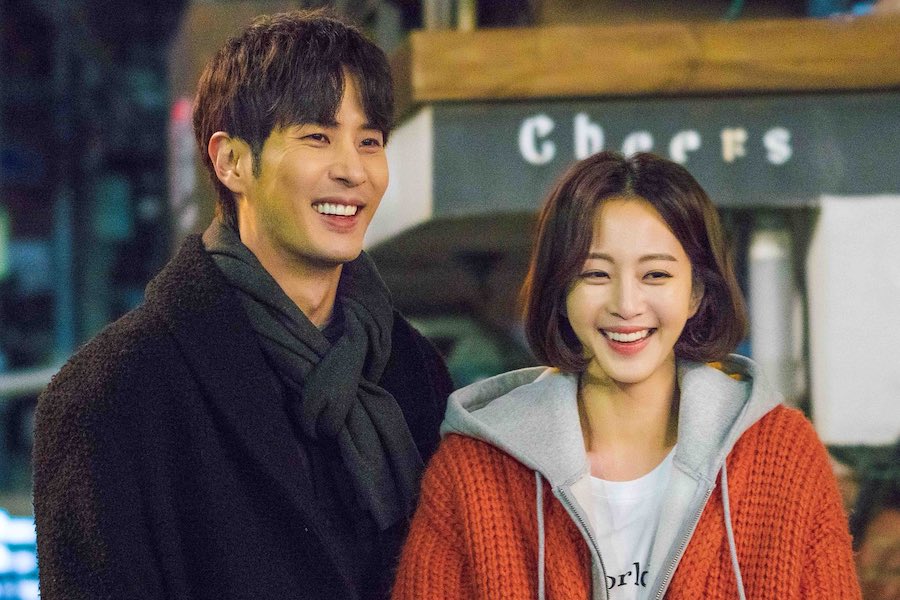 Following the stories of three now 30-something women who grew up together, the 2017 drama “20th Century Boy and Girl” has a lot to offer. While the stories of each woman are equally captivating, it’s the romance between Han Ye Seul as idol-turned-actor Sa Jin Jin and her long-lost first love Gong Ji Won (Kim Ji Suk) that really stands out. Watching the boy who has held onto his first love for literal years now have a chance to make those feelings known is fantastic in and of itself. But seeing that first love blossom into a true, lasting relationship is something far beyond wonderful. Of course it doesn’t hurt that these two actors born in 1981 have some great chemistry: there’s the banter that only life-long friends can have, the looks that only years of unrequited love can illicit, the tender touches that have been years in coming, and the smiles that make you melt. 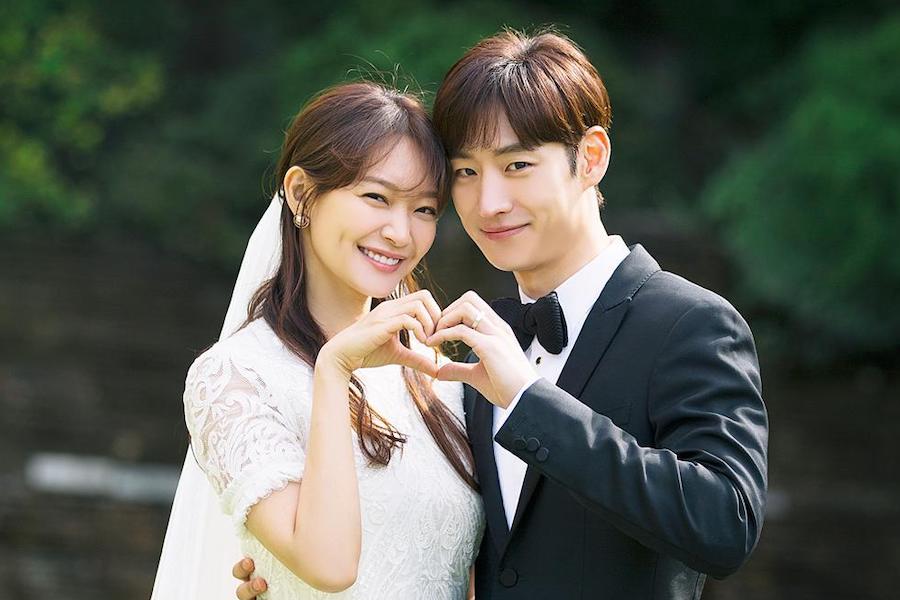 When a story involves selfless love and time travel, you know you’re in for a treat. And when Lee Je Hoon and Shin Min Ah (born in 1984) are the actors portraying that love, you know you’ve found something truly special, which is exactly why their chemistry in “Tomorrow With You” is worth mentioning. With the ability to travel through time, Yoo So Joon (Lee Je Hoon) wastes no time in marrying the love of his life, Song Ma Rin (Shin Min Ah). Knowing what So Joon knows about the future, you initially start to wonder if his motivation for marrying Ma Rin is purely selfish, but then you see the changes in So Joon as he begins to realize just how special and amazing his wife is as a person. There are these moments when those little light bulbs turn on, and you see the looks, smiles, and that sweetness that she draws out of him. It’s that journey he makes, with her by his side, and the love that grows between them that makes you realize their love is nothing short of magical.

Watch the first episode of “Tomorrow With You” here: 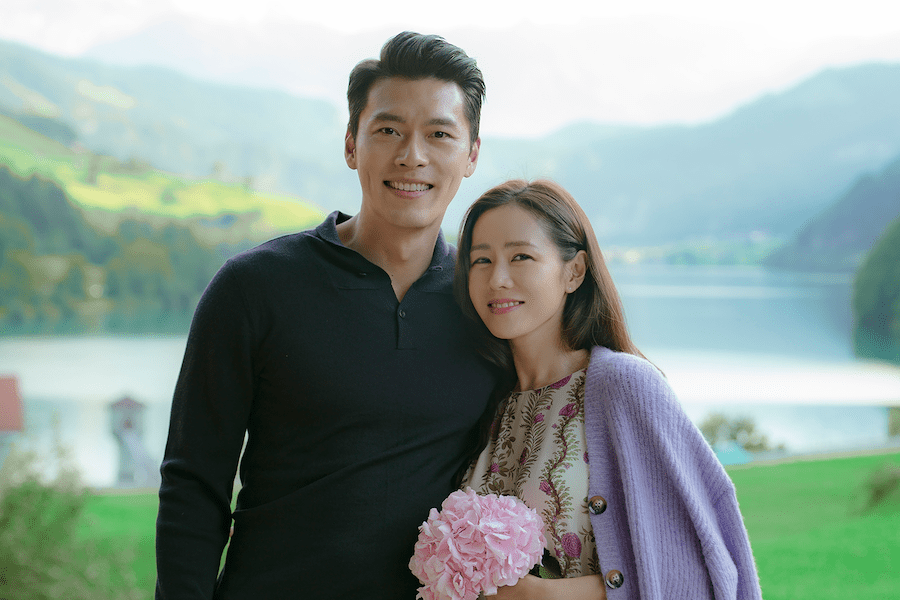 With 1982-line actors Hyun Bin and Son Ye Jin headlining the record-breaking 2019 rom-com “Crash Landing on You,” you know before you even start watching that you’re in for one heck of a drama. The chemistry between Hyun Bin’s Ri Jeong Hyeok and Son Ye Jin’s Yoon Se Ri is almost indescribable. The banter between these two, the looks they exchange, the subtleties of their growing affection, and their eventual declarations of love are nothing short of heart-stopping. There’s a reason this drama was nominated for and won so many awards. And we all know it comes down to the undeniable, unforgettable, tear-jerking, heart-stopping, life-giving spark between Hyun Bin and Son Ye Jin. 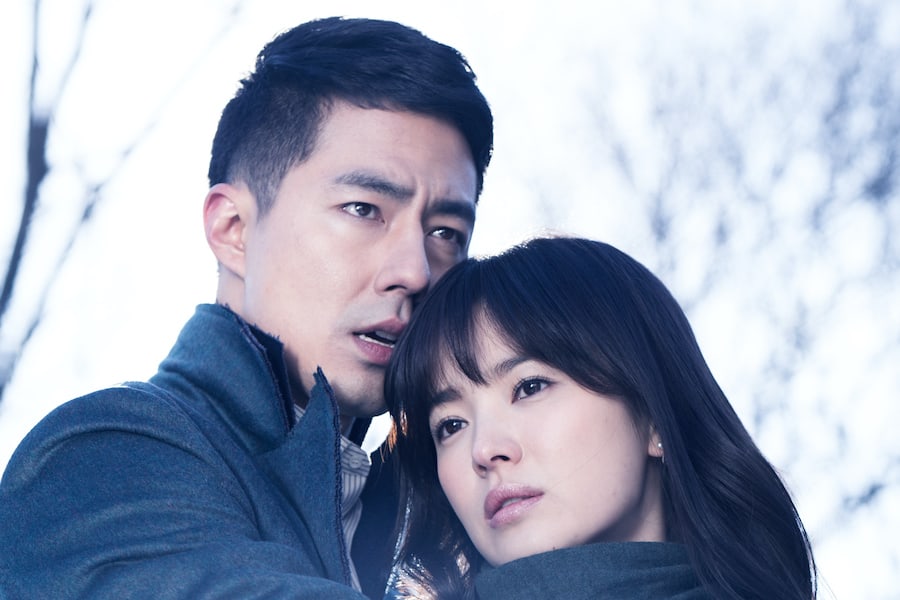 Wrapping up this list is the award-winning 2013 romance drama “That Winter, The Wind Blows” led by two 1981-born stars. The drama stars Song Hye Kyo as Oh Young, a legally blind heiress who is forced to spend her life estranged from her family, and Jo In Sung as Oh Soo, a high-stakes gambler and con man who weasels his way into Oh Young’s life. Though they may not have been brought together under the best of circumstances, the relationship and eventual love that grows between them is the very reason this drama won so many awards. The undeniable chemistry between the cold-hearted heiress and the heartbroken con-man who eventually breaks down all her barriers is exactly what every romance-lover lives for. If you haven’t already watched this one, you need to. Now.

Which pairs of same-age actors top your list of favorite drama couples? Let us know in the comments!