Gaon Chart has revealed its chart rankings for the week of March 13 to 19!

Jay Park and IU’s collaboration track “GANADARA” rose 35 spots this week to take over No. 1 while (G)I-DLE’s new release “TOMBOY” made its debut at No. 2.

In the No. 3 spot was Girls’ Generation’s Taeyeon with “INVU.” “Do you want to hear” by “How Do You Play?” project group MSG Wannabe (M.O.M) dropped to No. 4 on the list, while MeloMance’s Kim Min Seok’s “Drunken Confession” came in at No. 5. 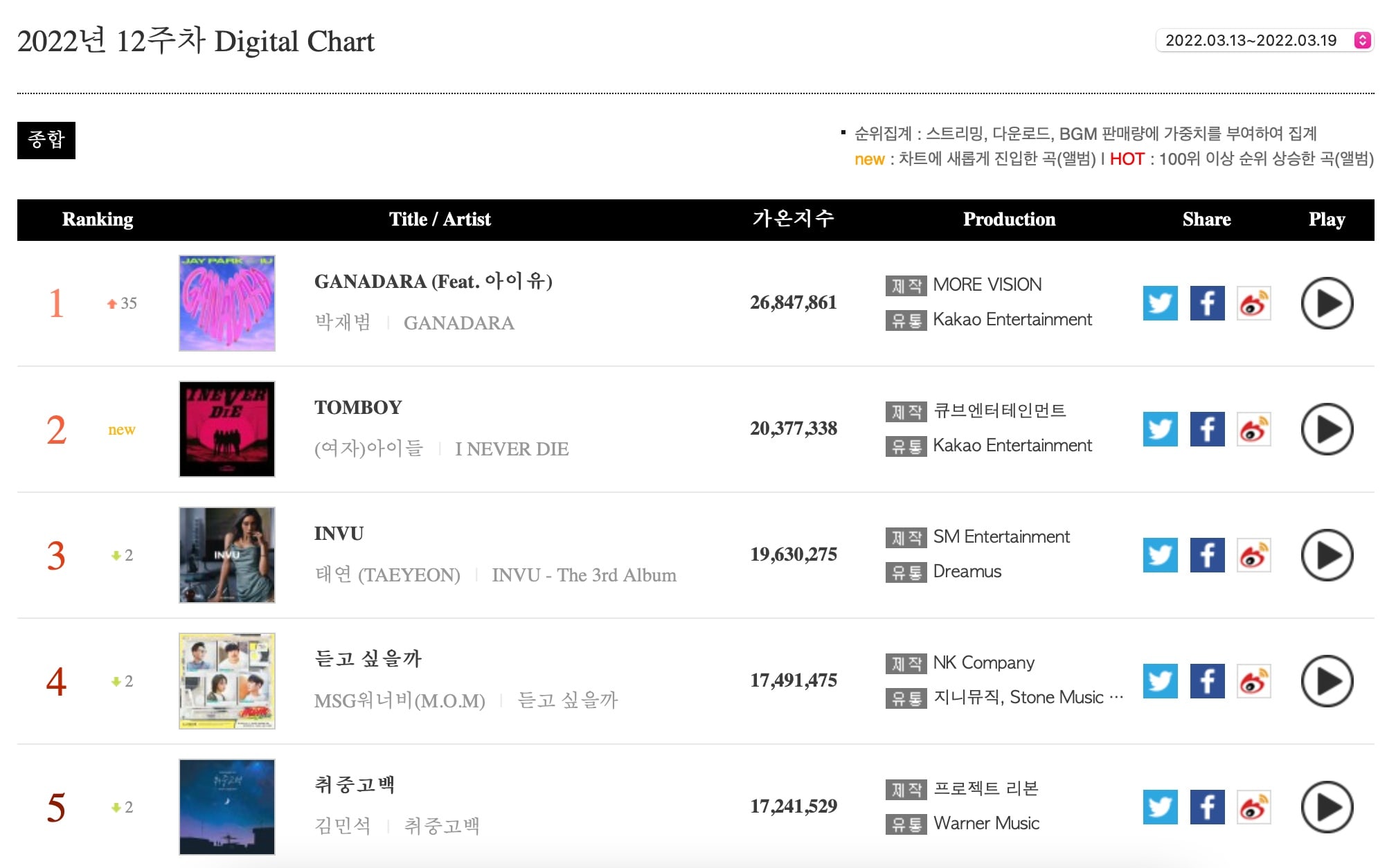 This week’s album chart was completely dominated by new releases, with Stray Kids’ “ODDINARY” debuting at No. 1. 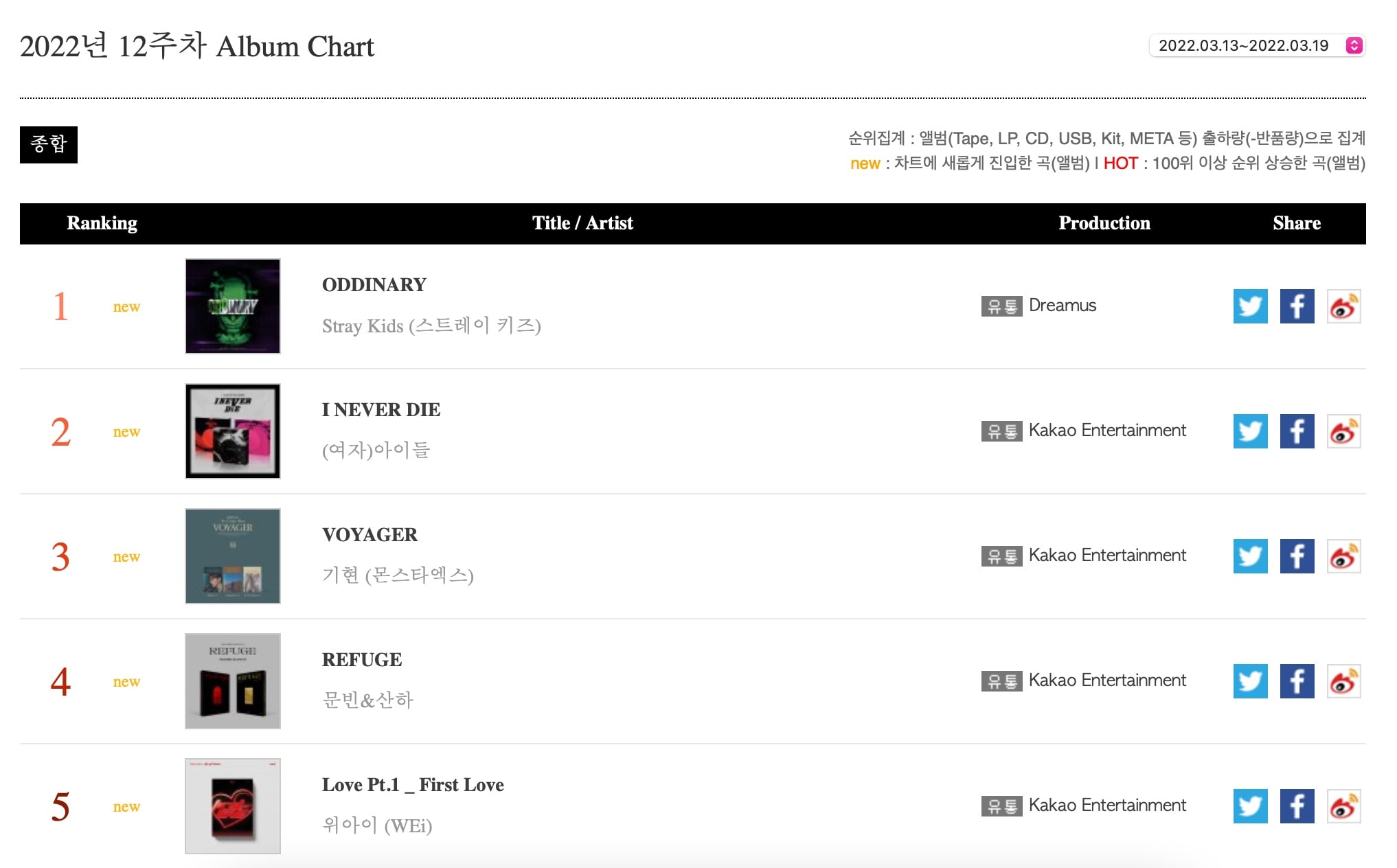 Gaon’s weekly retail chart was also dominated by new albums. “ODDINARY” by Stray Kids topped the list and (G)I-DLE’s “I NEVER DIE” came in at No. 2.

MONSTA X’s Kihyun claimed the No. 3 spot with his solo debut album “VOYAGER” and “REFUGE” by ASTRO’s Moonbin&Sanha took over No. 4 on the list.

The final spot in the top five was taken by NU’EST’s Best Album “Needle & Bubble.”

Also featuring various new releases, this week’s download chart had ASTRO’s Moonbin&Sanha at the top of the list with their new title track “WHO.”

(G)I-DLE made their debut at No. 2 with “TOMBOY” while Jay Park’s “GANADARA” (featuring IU) maintained its No. 3 position.

“Thank You” by Brave Girls debuted at No. 4 on the chart and MONSTA X’s Kihyun’s solo track “VOYAGER” took the No. 5 spot. 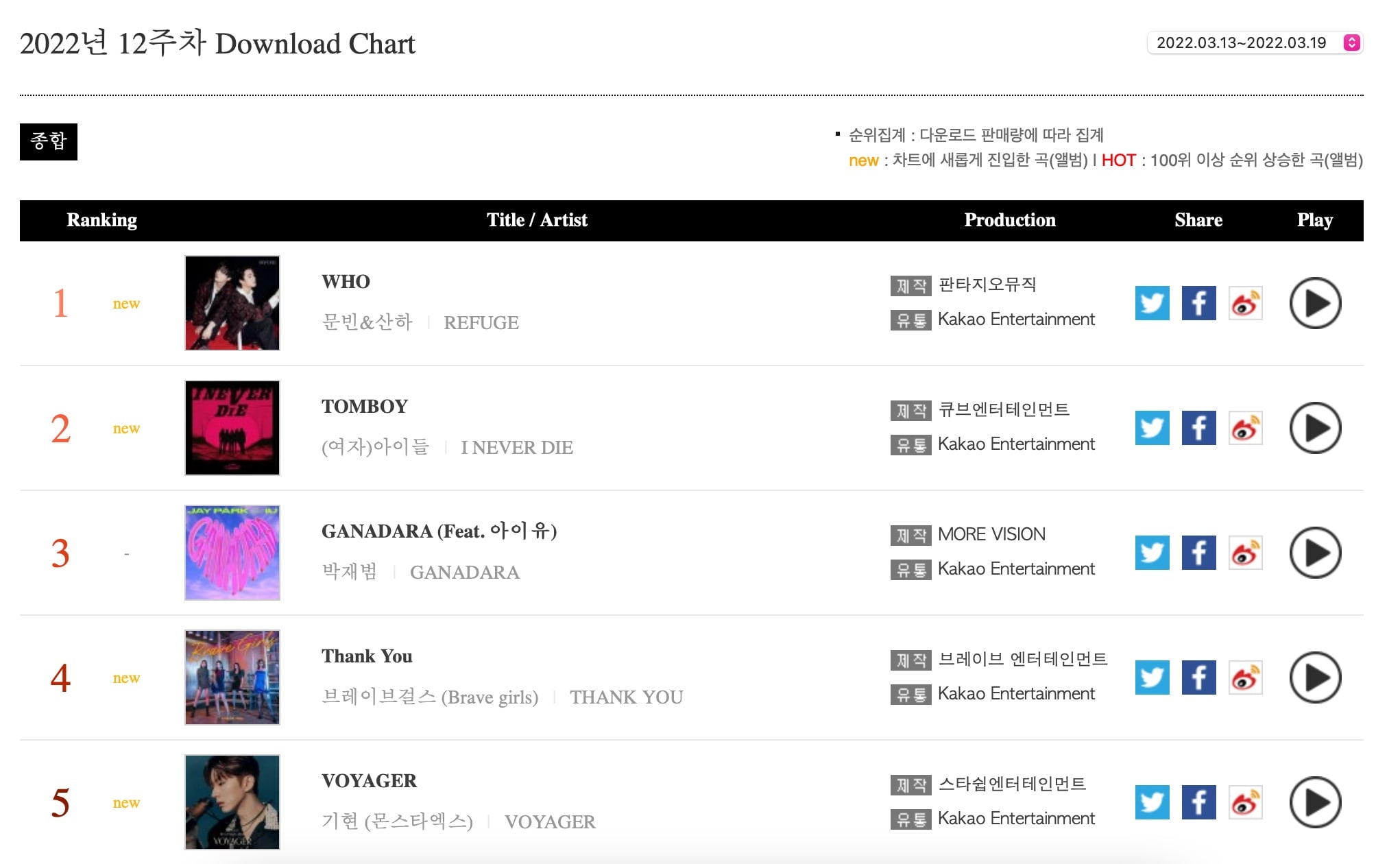 “INVU” by Girls’ Generation’s Taeyeon stayed hot on the list at No. 2, while “Do you want to hear” by MSG Wannabe (M.O.M) took No. 3 and “Drunken Confession” by MeloMance’s Kim Min Seok claimed the No. 4 spot.

Making its debut at No. 5 on this week’s streaming chart was (G)I-DLE’s new title track “TOMBOY.” 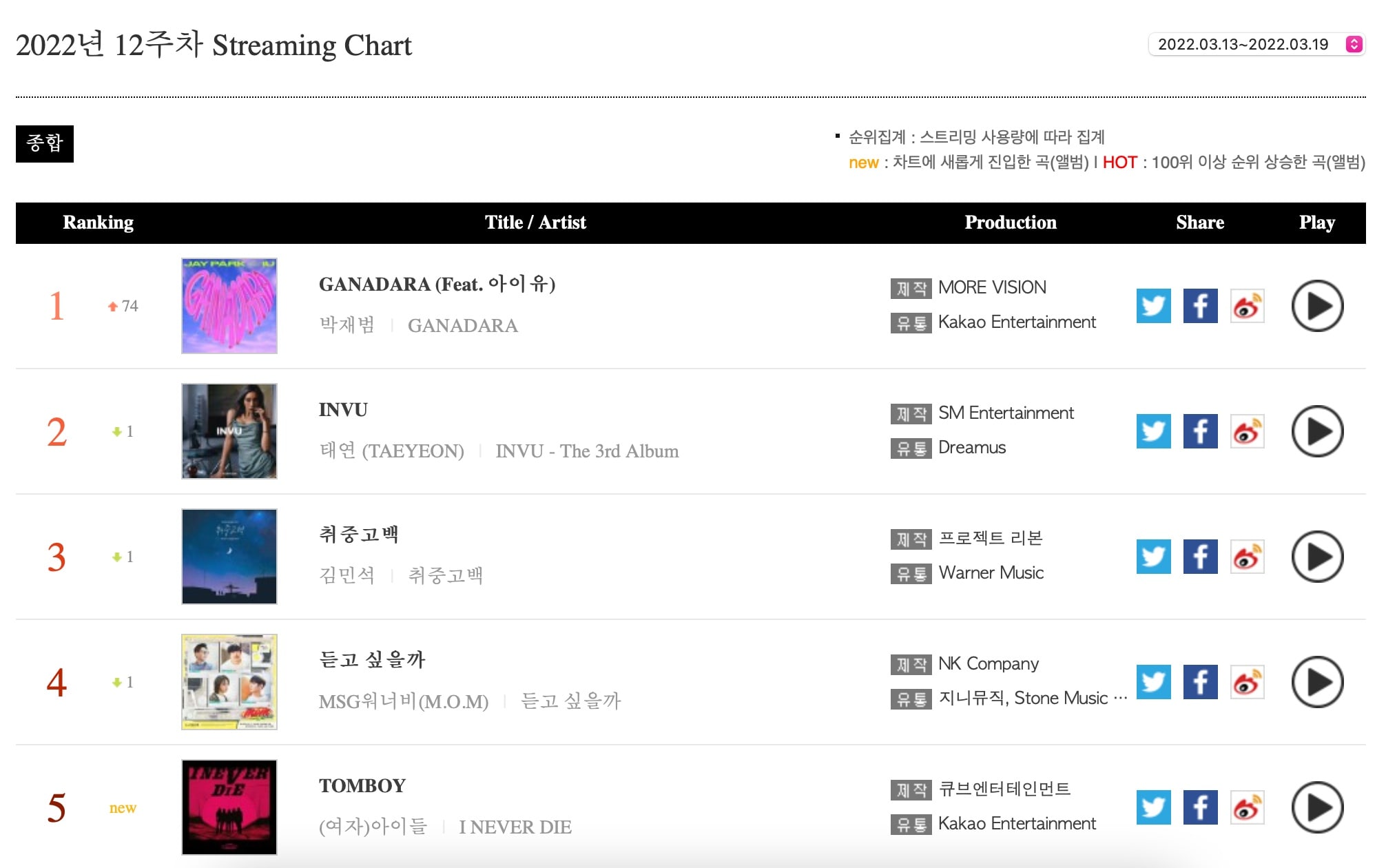 The top five artists on this week’s social chart remained almost the exact same as the week before. BTS continued their streak in the No. 1 spot and BLACKPINK remained at No. 2, with BLACKPINK’s Lisa staying strong in the No. 3 spot.

Lim Young Woong took the No. 4 spot, while Kim Ho Joong climbed up one spot to claim No. 5. 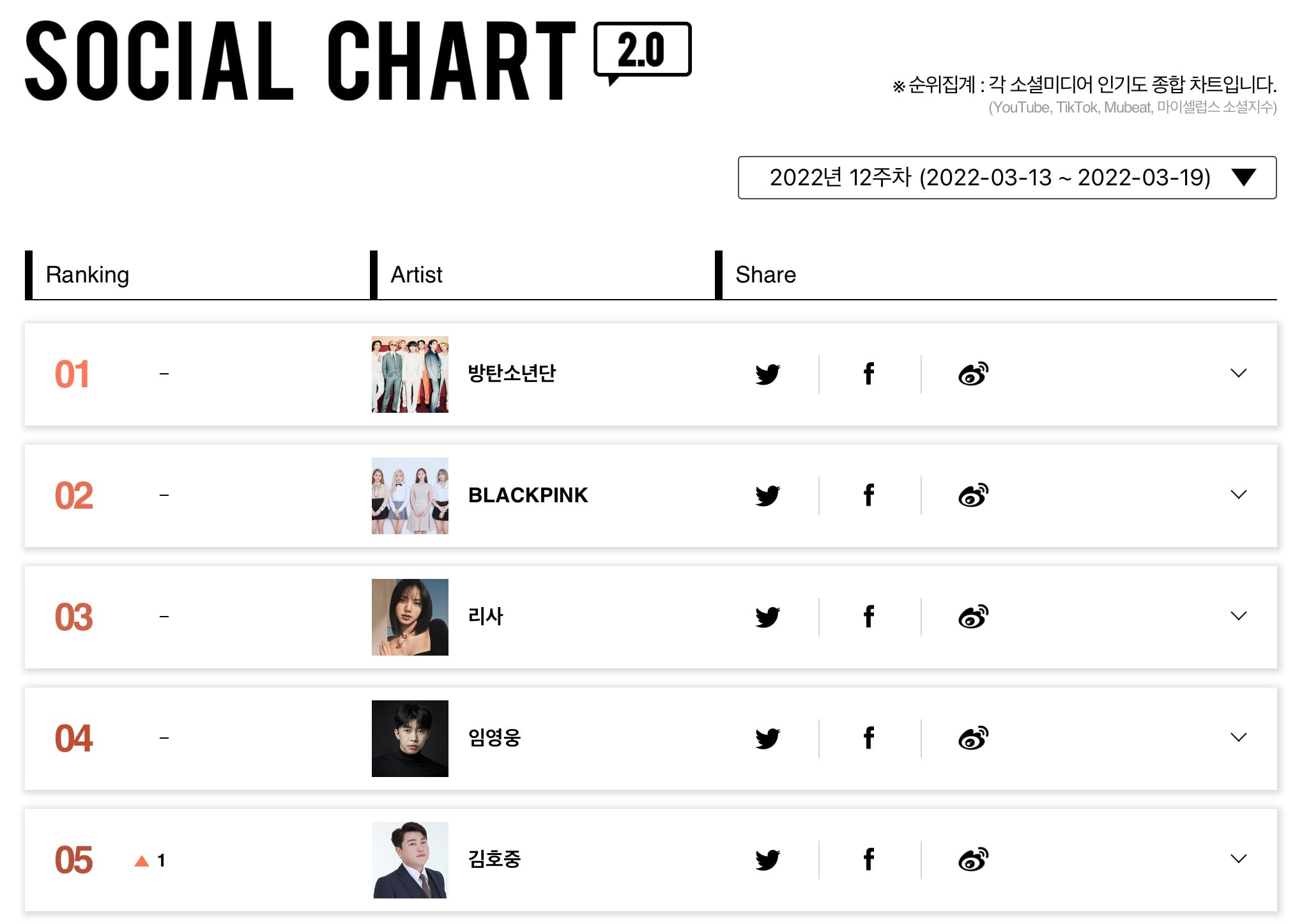